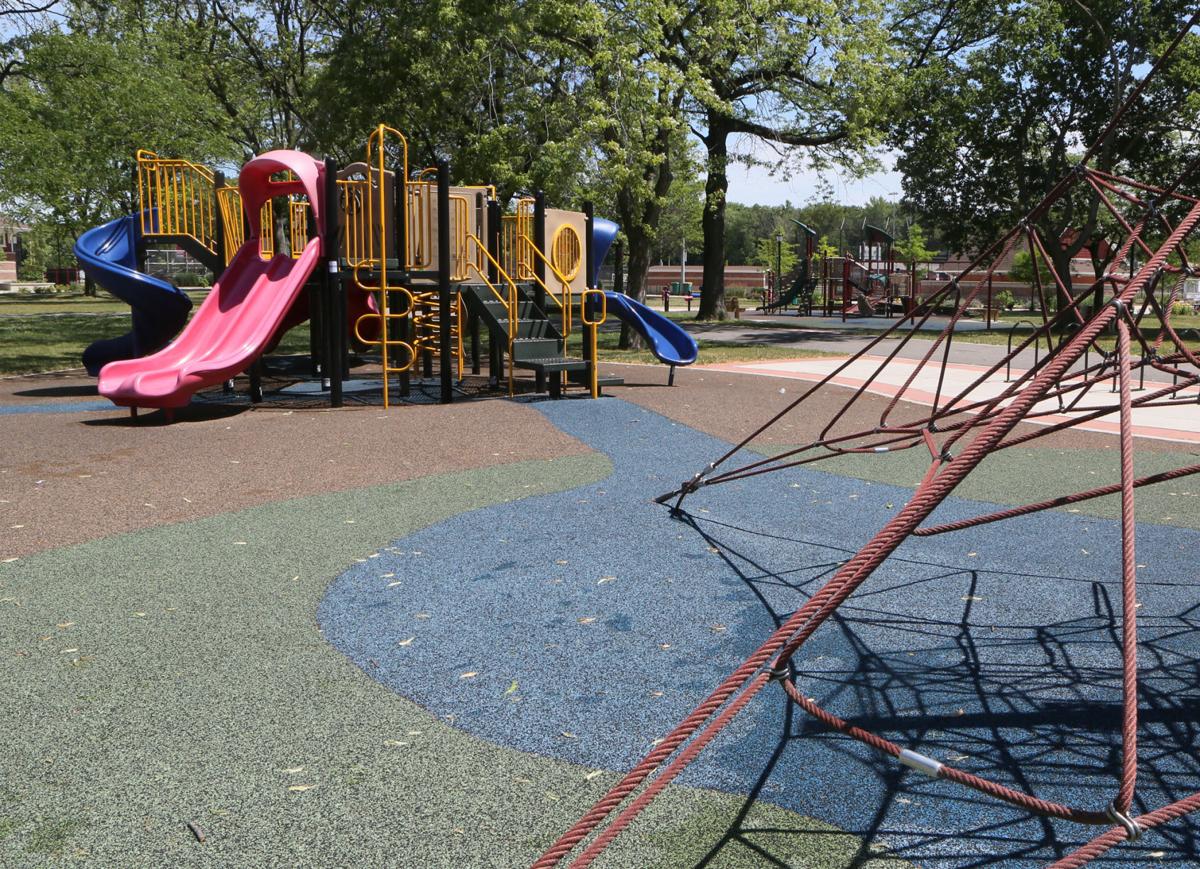 Community Park in Munster sits empty Wednesday morning. Kids are spending more time indoors and with electronics than ever before. 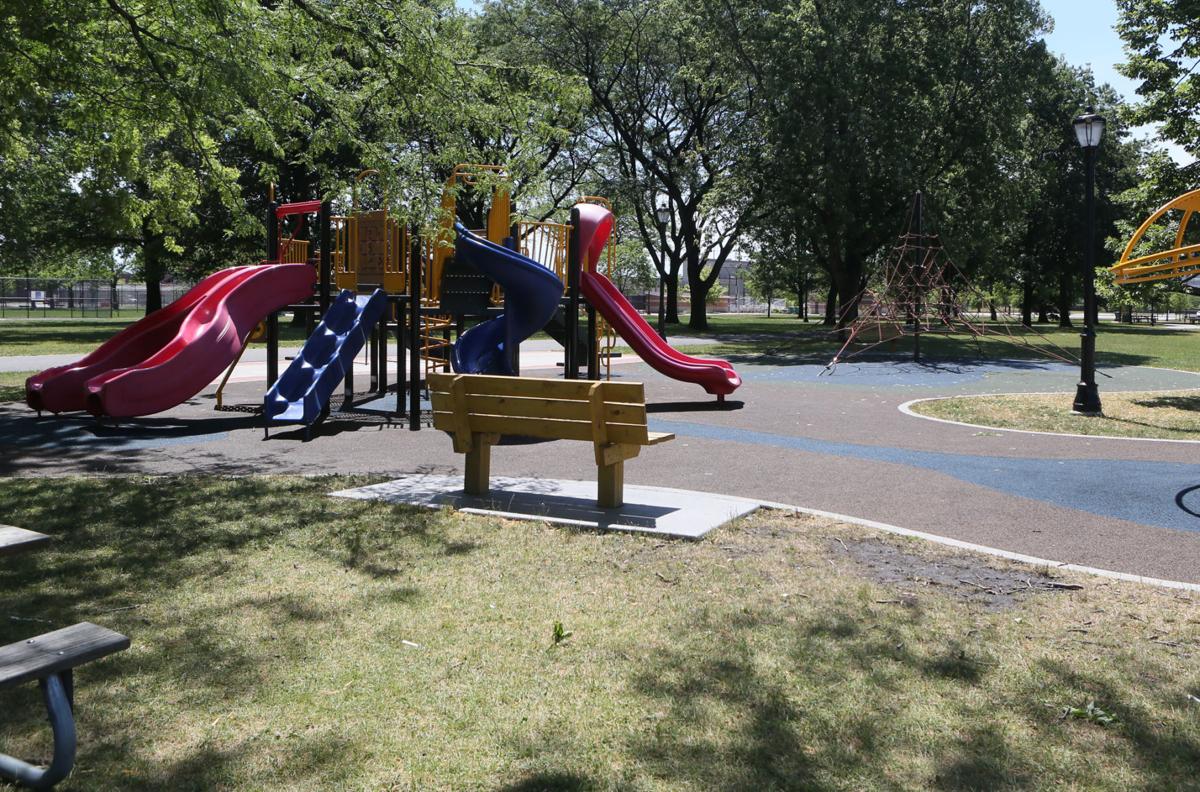 There's no children to be found at Community Park in Munster on Wednesday morning. 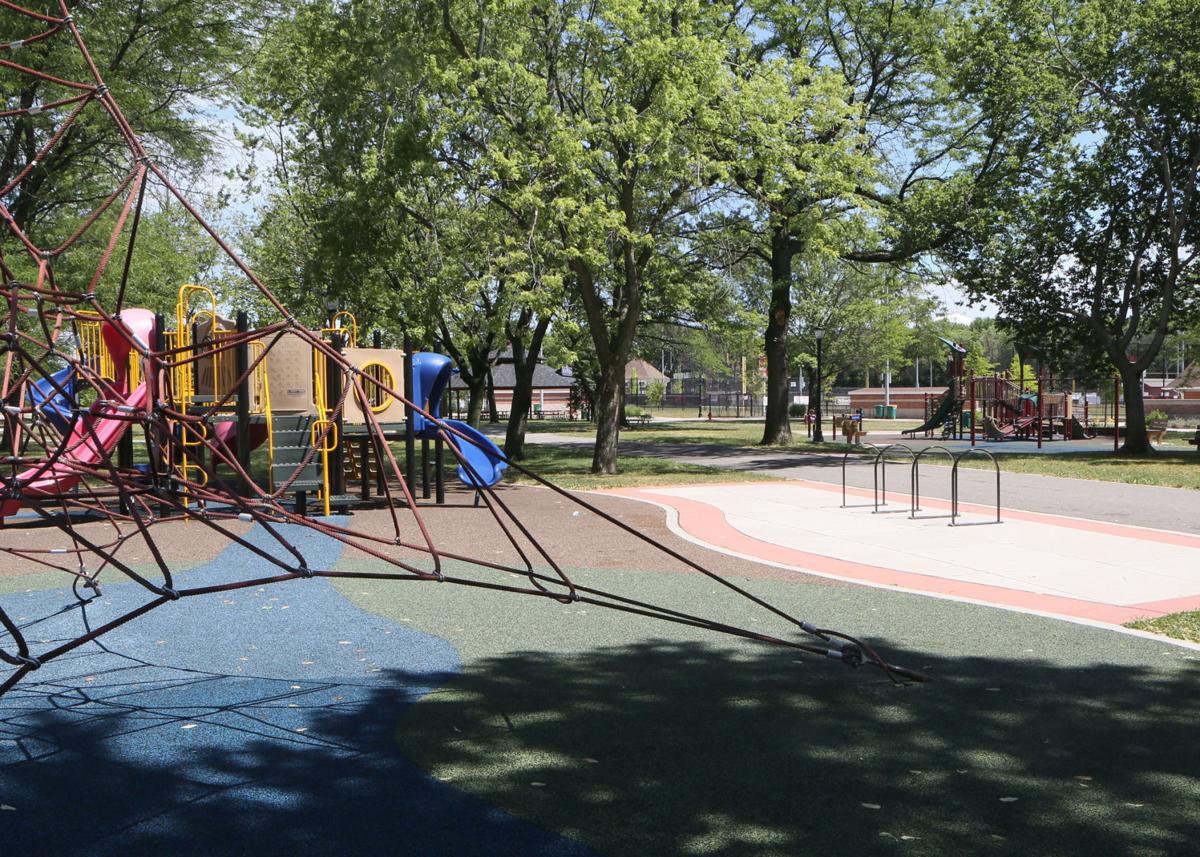 A nice day at Community Park in Munster didn't bring out the children to play. Kids are spending more time indoors and with electronics than ever before.

Niki Goodrich raised her kids to love the outdoors and physical activity. But she still has to be vigilant. If she sees her daughters, ages 9 and 6, spending too much time inside on a nice day, she encourages them to go enjoy the fresh air.

Goodrich, who exercises before work most mornings at 4 a.m., also tries to be a positive role model for them.

"I never use the word diet or weigh myself in front of the kids. I never weigh them," said Goodrich, a Valparaiso native who now lives in Plymouth. "We never really talk about being active in relation to how we look, but in relation to being healthy."

Goodrich noted that she sometimes has to remind her oldest daughter to check her phone more often, in case Goodrich is trying to contact her. That would put her daughter in the minority among today's smartphone-addicted youth.

American children now spend half as much time outdoors as they did 20 years ago, according to a study in the Journal of the American Medical Association, while consuming electronic media for more than 53 hours a week, the Kaiser Family Foundation reported.

In turn, children are less aerobically fit than their parents were at the same age, a University of South Australia study found. According to the Centers for Disease Control and Prevention, less than a third of high school students get the recommended 60 minutes a day of physical activity.

Lack of exercise is a risk factor for obesity, hypertension and autoimmune disease, among other conditions.

"I've been a pediatrician since 1978. There's no question about it that the kids today are, by and large, less well fit than the kids of, say, 20 to 25 years ago," said Dr. Louis Miceli, a family medicine specialist for the Porter Physician Group in Portage. "I can see it when the kids come in and I look at their body types and the way they're put together."

The rise in popularity of video games and technologies such as smartphones certainly plays a role. Budget cuts for education, particularly in low-income neighborhoods, has led to a reduction or outright elimination of gym classes. Another factor is the (often irrational) fear among parents that their children are unsafe outdoors.

"I'm a 30-something, going on 40 soon, and we are the result of the 'stranger-danger' era," Porter County Parks Superintendent Walter Lenckos said. "It's OK for your kids to go outside and play in a park and have fun and ride their bikes in the streets." The National Center for Missing & Exploited Children says that just 1 percent of missing children cases are the result of non-family abductions.

Communities also are not being built with active transportation in mind, Lenckos said, pointing to rural subdivisions only connected to town centers by roads. Compared to the late 1960s, the number of U.S. children between 5 and 14 years old who usually walk or bike to school has dropped by about three-fourths, the National Center for Safe Routes to School has reported.

But Lenckos said the tide is turning. The newest moms and dad are recognizing the damage done by the proliferation of fast food and the over-reliance on the automobile.

"This generation of parents is more aware of health issues than ever before," he asserted. "People like me were raised by a generation that was told by a surgeon general that it's OK to smoke cigarettes."

It's not always overprotective mothers and fathers who are at fault. Emily Trisler, a spokeswoman for Lake County Parks & Recreation, pointed to a study, by the Archives of Pediatric Medicine, showing that while 93 percent of parents felt their neighborhoods were safe, only 51 percent of kids have an opportunity to play outside daily.

But she noted that options are out there across Northwest Indiana. Cities and counties in the Region have a bevy of public parks, bike and walking trails and playgrounds. Park districts, YMCAs and other nonprofits have summer camps and programs year-round to keep kids active and outdoors.

And activities don't have to be formal, Trisler says.

"The health benefits for kids to just be able to run wild outside are huge," she remarked. "If parents just went and walked a trail or let their kids play on a playground every afternoon that would be phenomenal for the kids, and themselves as well."

If children are insistent on using electronic devices, Julianne Vasilak, an exercise specialist and personal trainer at Community Hospital Fitness Pointe in Munster, says to make them a deal: For every one minute of technology, they have to do a minute of physical activity.

Dr. Kaveh Rahmani, a family physician with Ingalls Health System in Crestwood, notes that kids do better with short-term rewards, so rather than telling them that eating too many cheeseburgers could cause them to get a heart attack in 50 years, say it will give them less energy to do the things they enjoy. And, of course, parents can't be eating that greasy, fast food themselves.

"I've been a pediatrician since 1978. There's no question about it that the kids today are, by and large, less well fit than the kids of, say, 20 to 25 years ago. I can see it when the kids come in and I look at their body types and the way they're put together." — Dr. Louis Miceli, a family medicine doctor for the Porter Physician Group in Portage

PORTAGE — If practice makes perfect, then the Portage High School dance team should be near perfection when it debuts its new routine this week.

Brain games: Valpo students learn how the mind works to calm it down

VALPARAISO — Instructional aide Kathleen Sellers hit a tuning fork, 10 second- and third-graders seated Indian-style on the floor in front of her.

PORTAGE — "Walk it out," Danny Gonzalez told the elementary school students as they got up from their chairs and started walking in place.

As soon as my kids saw it, they were transfixed.

Why playing outside is healthy for kids' mind and body

Because parents’ needs become secondary to their families’ needs, making time for exercise is difficult for any parent — whether they work out…

The scenario is all too familiar: You leave the house early, work for eight to 10 hours, drive home, prepare and eat dinner, clean the kitchen…

Community Park in Munster sits empty Wednesday morning. Kids are spending more time indoors and with electronics than ever before.

There's no children to be found at Community Park in Munster on Wednesday morning.

A nice day at Community Park in Munster didn't bring out the children to play. Kids are spending more time indoors and with electronics than ever before.