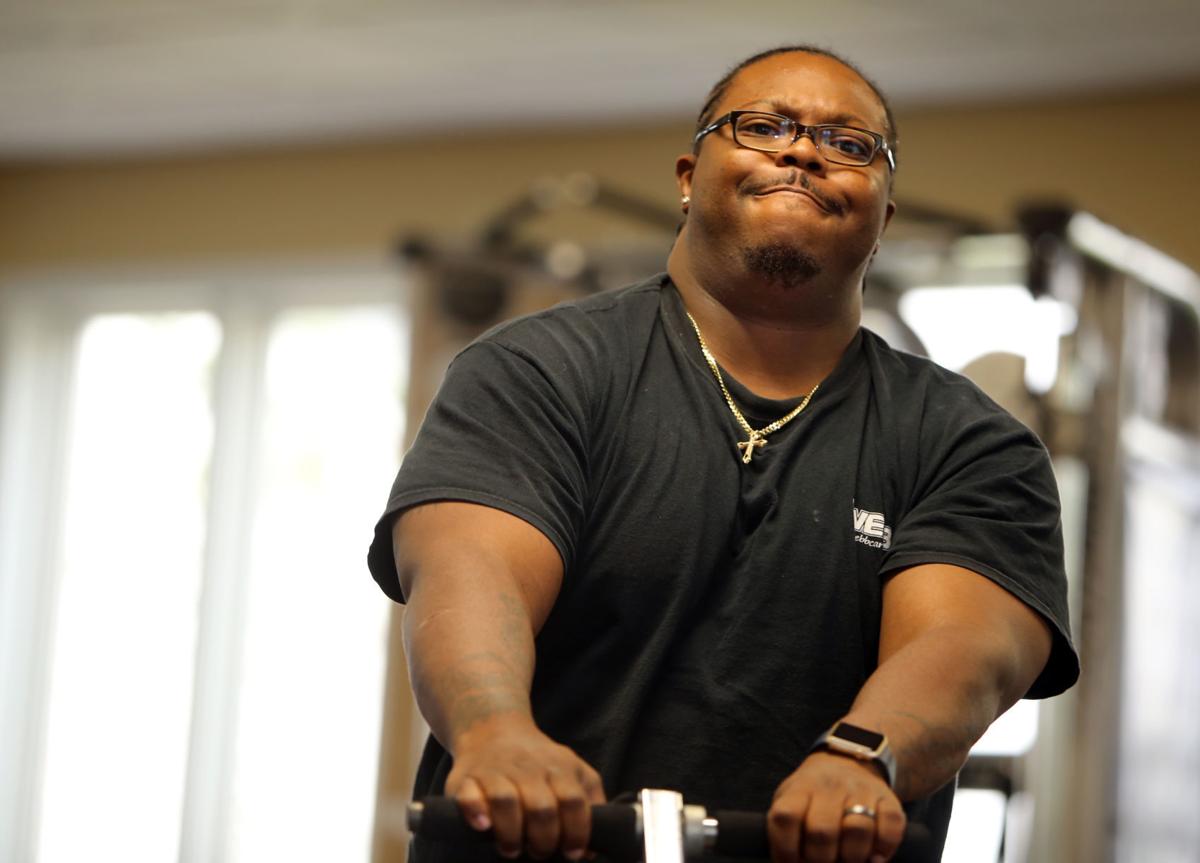 Eric Hicks, of Cedar Lake, had a rare condition called stiff-knee syndrome that left him unable to bend his knee. He has had nine surgeries and procedures to correct it and is rehabilitating every day at Great Lakes Orthopedics in St. John. 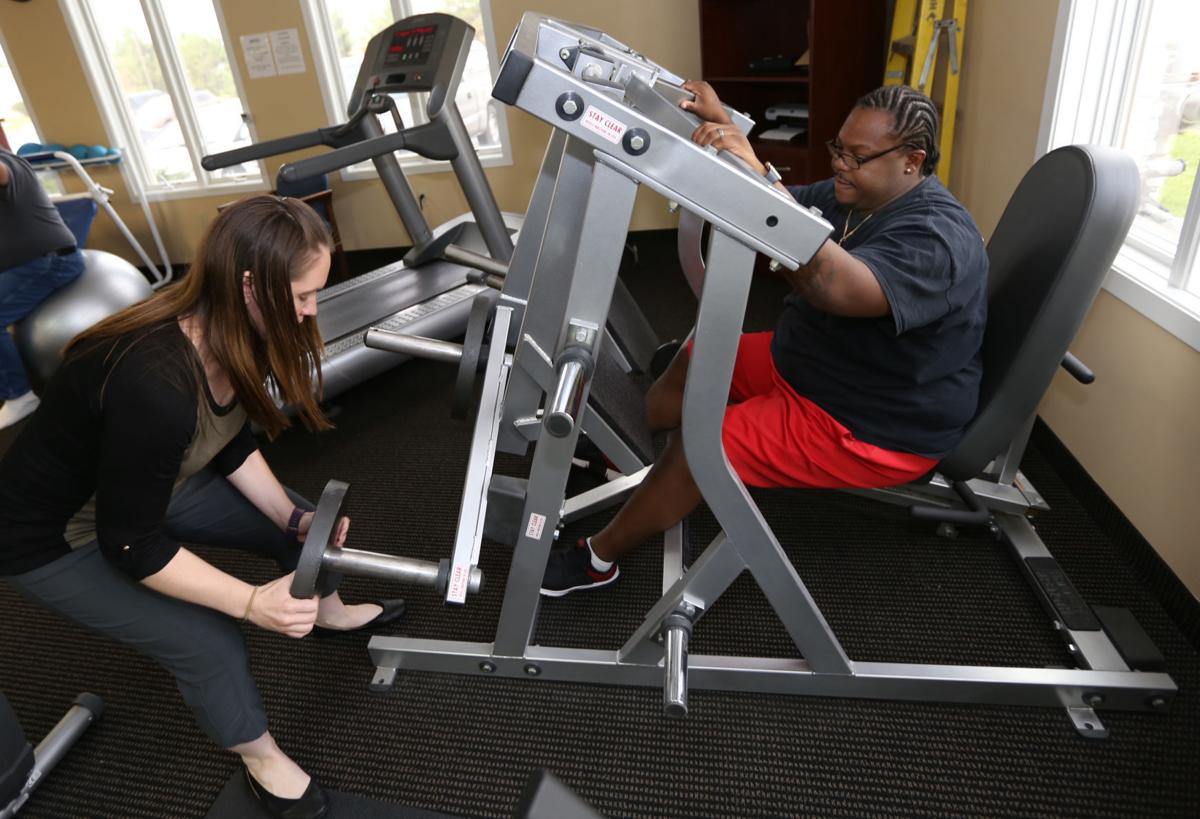 ST. JOHN — Eric Hicks pushed a sled containing 190 pounds worth of weights across the floor. A roughly 9-inch scar on his left knee, he walked as gingerly as he could.

"Try to get some bigger strides coming back, Eric," said Ashley Jones, a physical therapy assistant at the Great Lakes Orthopedics clinic. "There you go."

"When we first started on this, what weight did we have on there?" she asked him.

"Nothing, not a pound," Hicks said.

The 31-year-old from Cedar Lake has come a long way since October, when he couldn't even straighten his left leg.

Hicks' joint problems started during high school football, when he took a helmet to the knee. A surgeon repaired his ACL and meniscus. Over the next 13 years, he would undergo eight more surgeries.

He continued to play football, but his knee problems persisted. During college, a physician compared his knee to that of a 60-year-old man. He was diagnosed with arthritis.

By last year, if he as much as walked around the block, his knee would swell up and be out of use for days. He had to stop working at his job as a railroad conductor. In October, he underwent a full knee replacement.

Afterward, however, things got worse. A normal knee bends 0 degrees (straight) to 140 degrees (fully bent). Hicks' range was between 50 and 75 degrees.

He had to wear a brace and use a cane. Physical therapy and surgical manipulations didn't fix the problem.

"I couldn't do anything with my kids or my wife," Hicks said. "I was pretty much stuck in a chair. For me to get up to walk to the mailbox was pretty much impossible." He even considered having his leg amputated and getting outfitted with a prosthetic.

"I was at a point where I couldn't even go to the bathroom without any type of assistance," he said. "It was like I was a 3-year-old. I have a 5-year-old and 7-year-old that look up to me."

Hicks was referred to a Chicago hip and knee revisionist. That doctor diagnosed Hicks with "stiff knee syndrome," or arthrofibrosis, a buildup of scar tissue after a knee replacement.

"It's sort of an exaggerated healing response," said Dr. Henry Finn, director of the Chicago Center for Orthopedics at Weiss Memorial Hospital and professor of orthopedic surgery at the University of Chicago. "The knee has a bend inflection like you're sitting but won't go straight. Imagine how crippling that would be. You would be all hunched over and couldn't walk with any semblance of a normal gait. You could barely hop along."

He noted that the knee is the largest joint in the body. When it goes bad, he said, it "causes more functional disability than any other joint."

According to Weiss Memorial Hospital, about 10 percent of knee replacements are revisions. Of those, about half (or 50,000 a year) involve some degree of stiff knee syndrome. While the exact cause of the condition is unknown, Finn said it may be the result of genetics, hidden infections or allergies to metal.

Finn's treatment involves exposing the knee to a low dose of radiation prior to the surgery, to slow or prevent scar tissue formation, then removing the knee implant and replacing it with a rotating-hinged knee to allow for greater range of motion.

Hicks had the surgery in April. It increased his flexibility right away. When his wife saw the initial improvement, she cried.

That doesn't mean Hicks didn't have to put more work in. He has been doing physical therapy, five days a week, five hours each day.

"Everything's been a complete 180 since October," he said. "I work with the therapists day in and day out. They never gave up on me. There were times I was done. My wife, my family, my support system — they stuck with me through this tough time. I finally see the light at the end of the tunnel."

Hicks is back playing baseball with his kids, going on evening walks with his family. He can bend over again. He can walk up and down stairs.

His range of motion is now 10 to 100 degrees. Finn expects it to get even better. The two have a follow-up appointment next week. If all goes well, Hicks could be back at work the next day.

Hicks is the youngest patient Finn has treated for stiff knee syndrome (people usually don't get knee replacements so young). The doctor predicts Hicks will need at least two more revisions in his lifetime. The hinged knee implants generally last between 15 and 25 years.

An inspiration to others

On the recent day at Great Lakes Orthopaedics, Hicks did the leg press machine. He squatted against the wall with an exercise ball behind his back. He laid on a table and Jones held his knee at a 90-degree angle, then tried to bend it farther.

"You all right?" Jones asked.

A couple of months ago, Finn told him he should be progressing faster. Jones and her colleagues took that as a challenge. They redid Hicks' therapy regimen — and worked him even harder. At one point, Jones made him cry. A picture on the wall of the therapists is captioned: "Great Lakes Physical Terrorists."

"I'll try not to make you cry today," she told him during their recent visit. Next up were "death slides," Jones said with a smile. Laying down with a 10-pound weight wrapped around his leg, he slid the limb up and down the wall.

Nowadays, if rehab patients at Great Lakes ever talk about giving up, the therapists have them talk to Eric. If I can do it, so can you, he tells them.

"I'm just trying to live my life," he said. "I don't want to be handicapped — that's the thing that pushes me. I want to support my wife and kids. I want to be able to be their superhero. There was a time I couldn't. I'm getting close to the point where I can provide for them like I used to."

"I'm just trying to live my life. I don't want to be handicapped — that's the thing that pushes me. I want to support my wife and kids. I want to be able to be their superhero. There was a time I couldn't. I'm getting close to the point where I can provide for them like I used to." — Eric Hicks

For a deceptively simple cabbage and noodle saute, use kelp

The healthy noodle market is booming, thanks to low-carb fans, and so it's no surprise that kelp noodles, which used to be a specialty-store i…

Here are the top 10 trending health stories for the month of August.

Osteoarthritis, or “wear and tear” arthritis, is the leading cause of hip and knee pain in the U.S. The ends of our bones are covered in carti…

HIGHLAND — On a pitch-black late afternoon in a chilly parking lot here, the parents stared down at their phones.

Mark Blaszczyk was remodeling his deck on a recent day in Wheatfield. A few months ago, that didn't look like it would be possible.

Portage woman can walk again thanks to free surgery

Pam Watkins found herself unable to walk for long periods of time — and uninsured.

Same-day surgeries on the rise in NWI

MUNSTER — The surgeon hammered into the patient's bone before extracting stem cells with a large syringe. He then handed it off to an assistan…

Eric Hicks, of Cedar Lake, had a rare condition called stiff-knee syndrome that left him unable to bend his knee. He has had nine surgeries and procedures to correct it and is rehabilitating every day at Great Lakes Orthopedics in St. John.