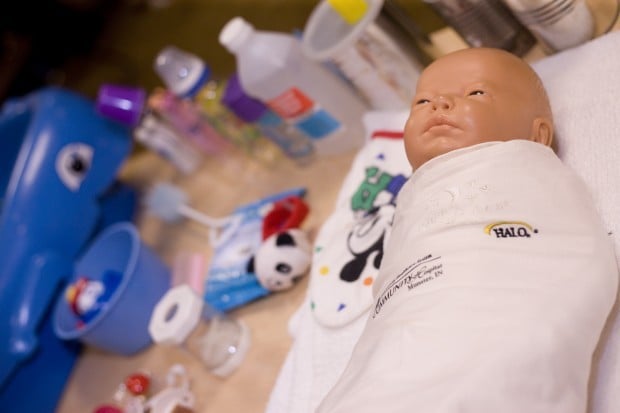 The Community Healthcare system is beginning to use swaddling sacks by Halo in its hospitals. They are considered safer than blankets. 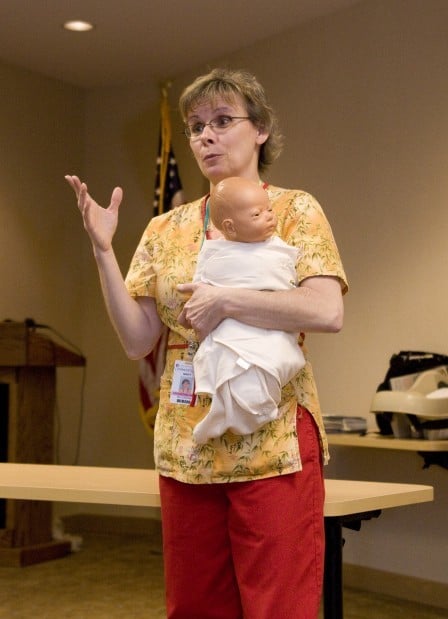 Mary Puntillo, an educator with the Community Healthcare system, describes to class participants the importance of a safe sleeping environment for infants. 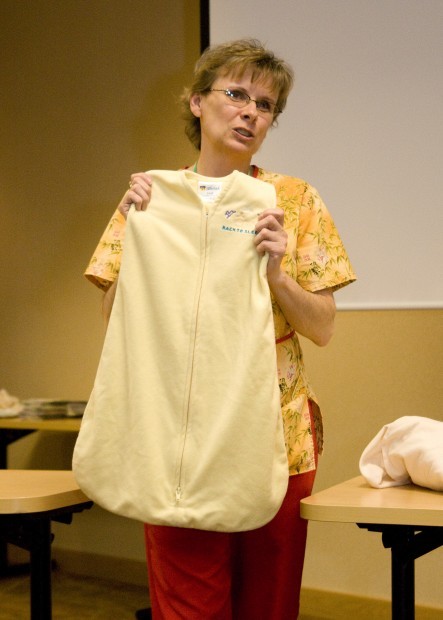 Mary Puntillo, an educator with the Community Healthcare system, explains various alternatives to blanketing infants while they sleep.
By Kathleen Quilligan , (219) 662-5331

ST. JOHN | Chrisanne Terry said she was pretty clueless about what would be unsafe for a baby until she got pregnant and began doing research.

"We have a bumper pad in the crib that he wants to keep, but I don't," said Terry, gesturing to her husband John Terry, both of Munster, sitting next to her. "But I think after tonight, we'll take it out."

That's a checkmark in the "new parents reached" box for Mary Puntillo, an educator and neonatal nurse clinician at The Community Hospital, who was teaching the Taking Care of Baby class that the Terrys were sitting in. Puntillo had just finished a portion of the class discussing safe sleeping practices for infants in an effort to move Lake County out of the position as the Indiana county with the most Sudden Unexpected Infant Deaths, or SUIDs.

Sudden Infant Death Syndrome, SIDS, is a specific type of SUID. According to firstcandle.org, there are 4,500 SUIDs a year in the U.S., and of those more than 2,200 are SIDS deaths. While researchers believe SIDS deaths are a result of a brain stem abnormality, SUIDs can be caused by a variety of things. However, statistics from First Candle show that 80 to 90 percent of these deaths are the result of unsafe sleeping practices.

Puntillo and Community Healthcare System are working with new parents, grandparents, physicians and nurses to reduce the number of SUIDs by emphasizing that healthy, full-term infants should sleep on their backs, by themselves and in a naked crib -- one without bumper pads, blankets or soft toys.

In the three Community Health System hospitals, the nurses in delivery have begun practicing what they're asking caregivers to do and using Halo SleepSacks, or zippered wearable blankets, so new parents can model their behavior.

A report on Sudden Unexpected Infant Deaths in Indiana between 1999 and 2006 released by the Indiana State Department of Health looked at SIDS and SUIDs in Lake, Allen, Marion, Elkhart and St. Joesph counties. The report found of all the SIDS and SUIDs deaths during that period, in Lake County 8 percent were identified as SIDS, but 84 percent were other SUIDs, the highest amount of SUIDs of the five counties. Eight percent were labeled as unknown causes.

Puntillo's push for safe sleeping practices began after she received a packet of information from Dr. Janice Zunich, director of the Genetics Center at Indiana University School of Medicine Northwest. Zunich was delivering information to area hospitals that had been compiled in a project from students at Purdue University Calumet about safe sleeping practices in 2009. The project came up when a liaison from Franciscan St. Anthony Health Crown Point asked Zunich if she had any ideas for a student project.

"With Community leading Lake County in deliveries, we're in a great position to have an impact on the numbers," Puntillo said.

A week after the Terrys changed their minds about a bumper pad in the bed, Puntillo was hosting another class, this time for grandparents.

"I'm sure you all put your babies on your bellies," said Puntillo as the future grandparents in the room nodded. Puntillo said she did too, for two of her children, and she resisted the idea of back sleeping with her third child, who was prone to throwing up. But Puntillo said babies will naturally turn their heads if they throw up while on their backs so they don't choke.

Rebecca French, whose daughter is due in June, considered not attending the class, but she changed her mind because she knew that's what her daughter wanted. As Puntillo talked about a naked crib, French wrote down "no blankets, no bumper pads, no pillows, no stuffed animals," in her notepad. It was all new to her.

"I've got to return some stuff to the store now," she said.

There was no other way Mary Puntillo could lay it out except to be blunt.

The Community Healthcare system is beginning to use swaddling sacks by Halo in its hospitals. They are considered safer than blankets.

Mary Puntillo, an educator with the Community Healthcare system, describes to class participants the importance of a safe sleeping environment for infants.

Mary Puntillo, an educator with the Community Healthcare system, explains various alternatives to blanketing infants while they sleep.
© Copyright 2021 NWI Times, 601 W. 45th Ave. Munster, IN | Terms of Use | Privacy Policy
Powered by BLOX Content Management System from TownNews.com.
You don't have any notifications.