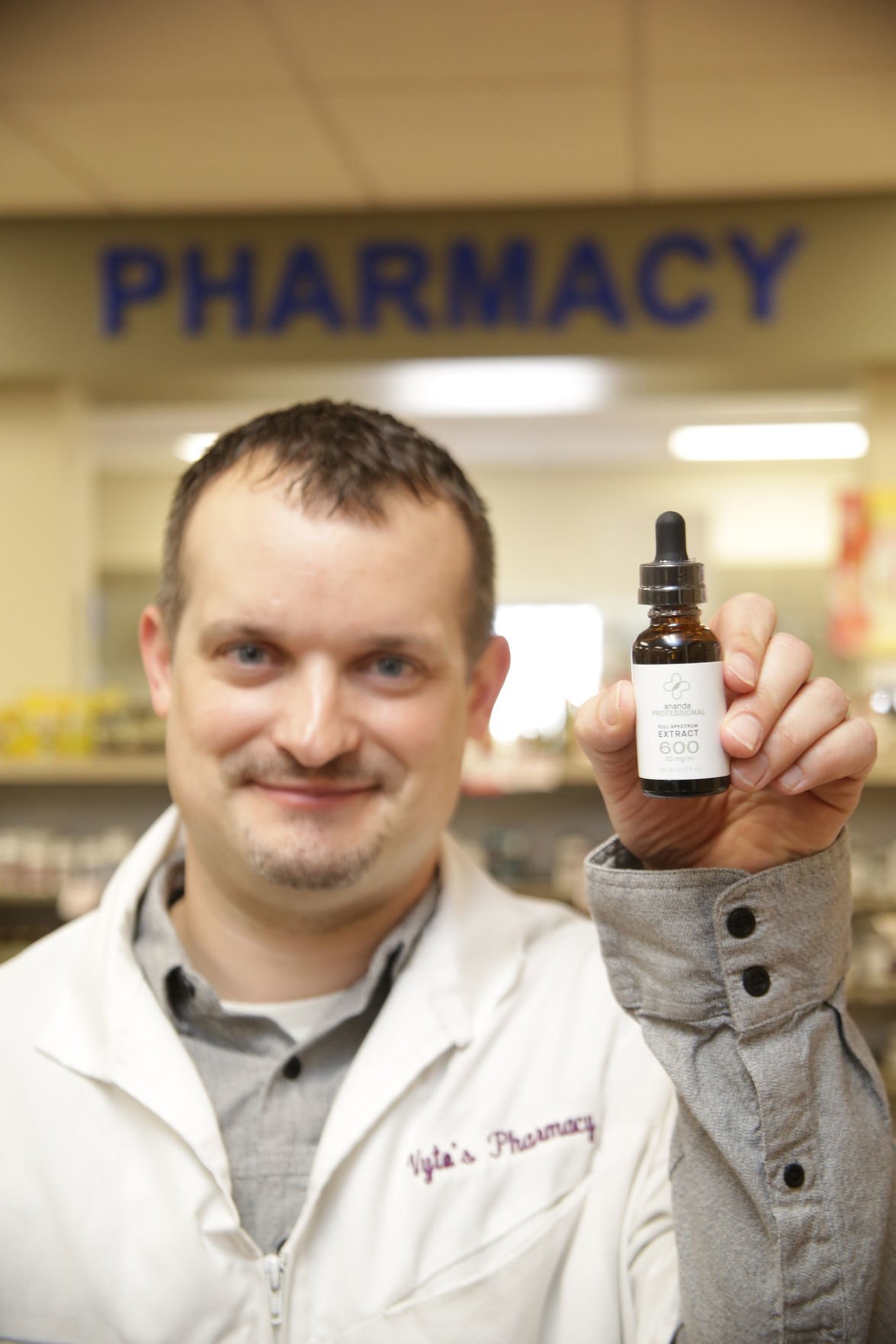 Nathan Damasius, pharmacist and co-owner of Vyto’s Pharmacy, with the CBD oil it offers. 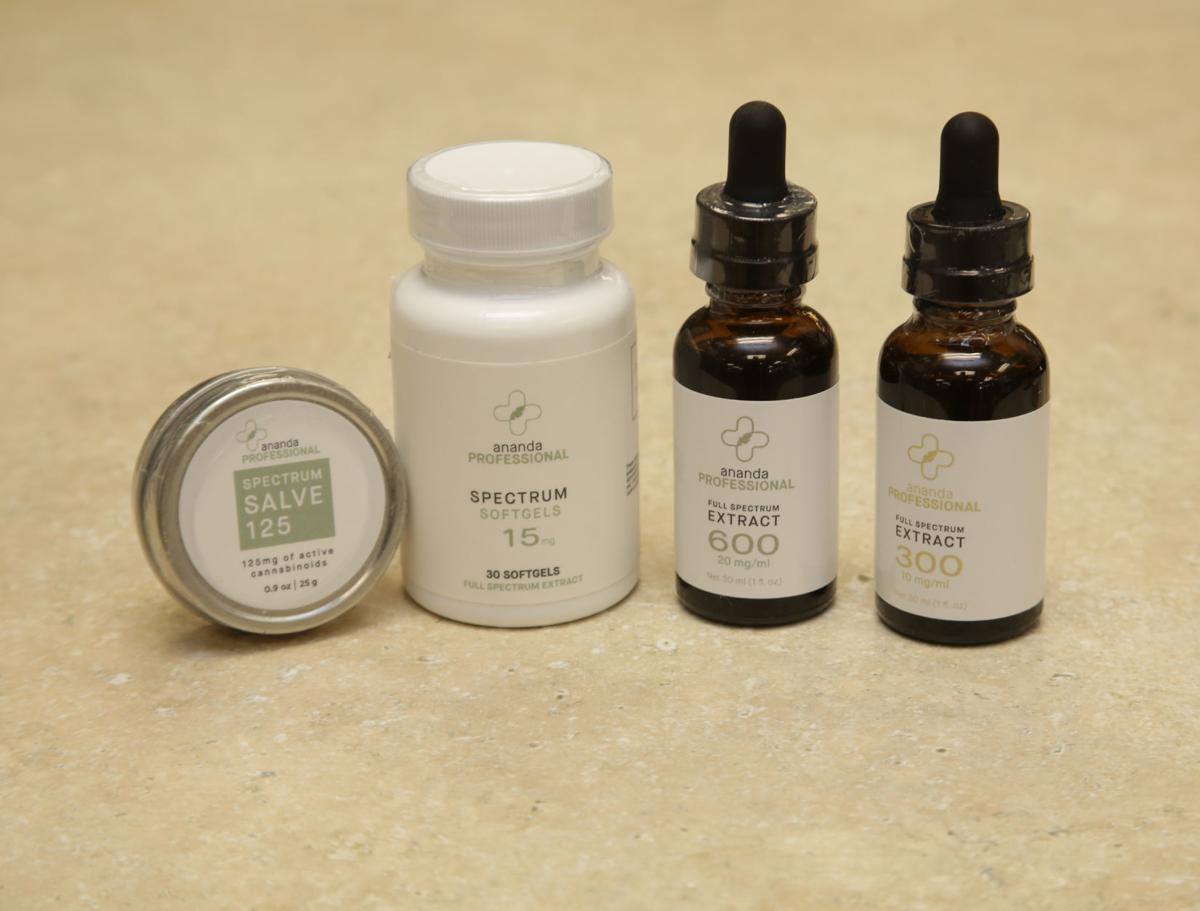 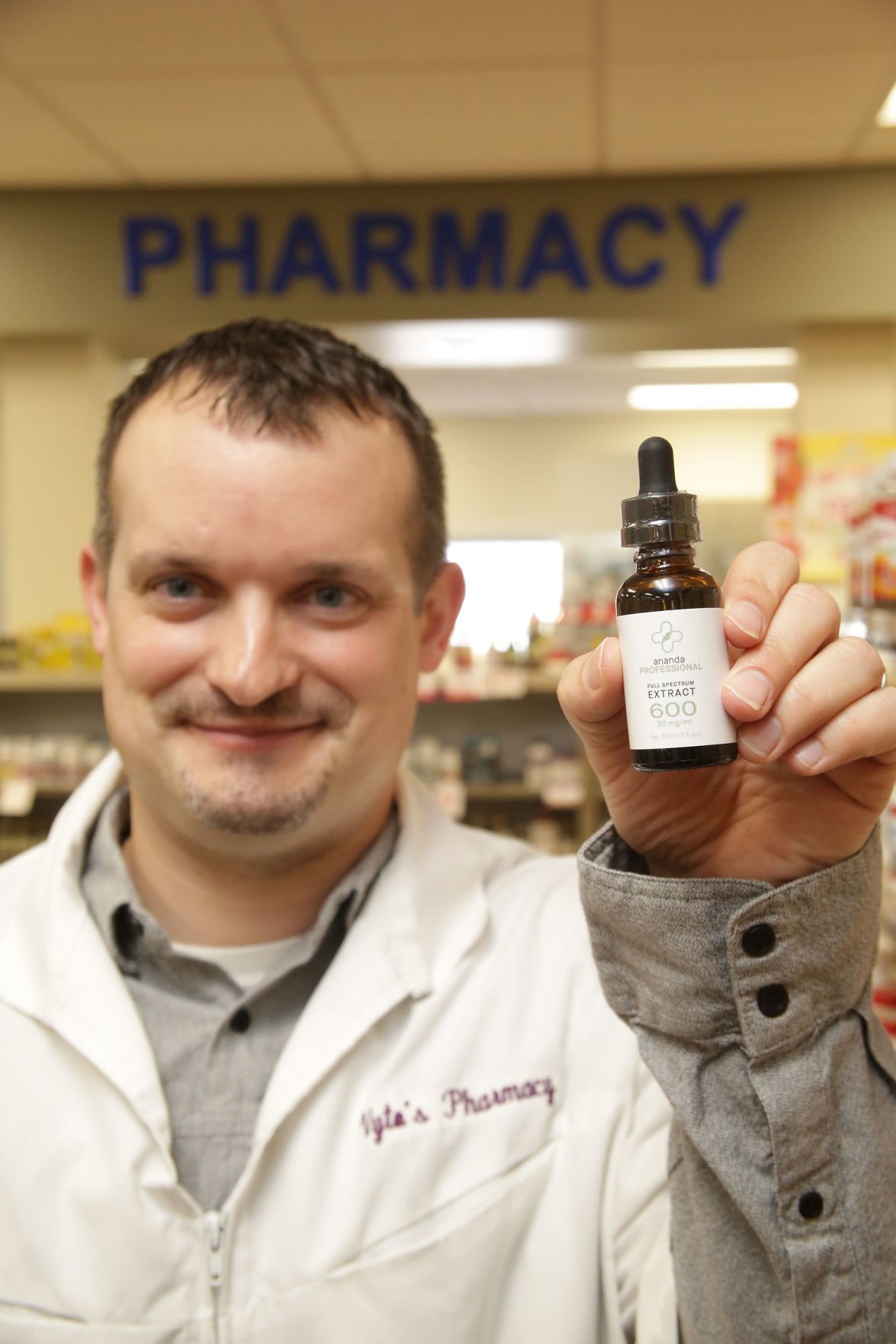 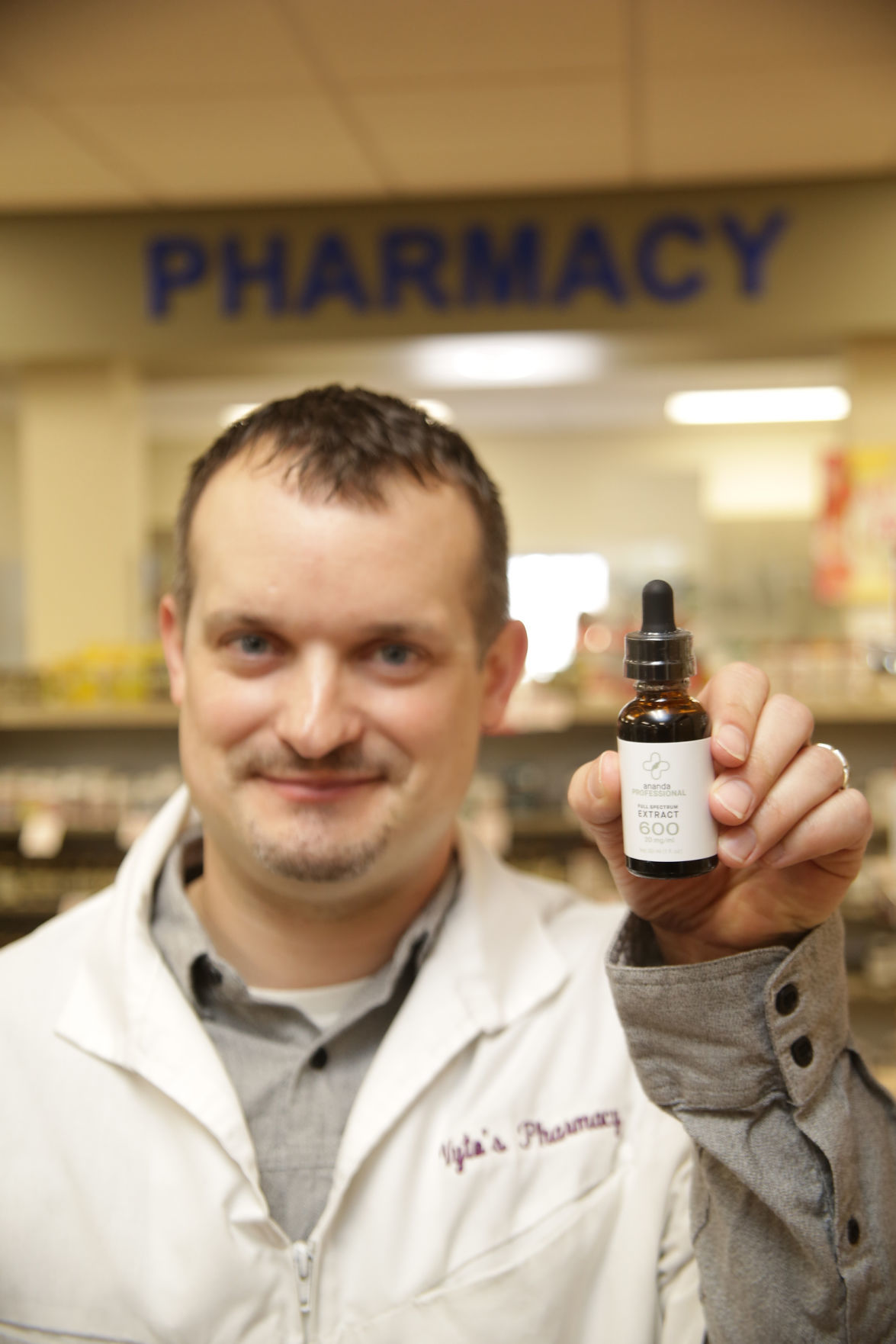 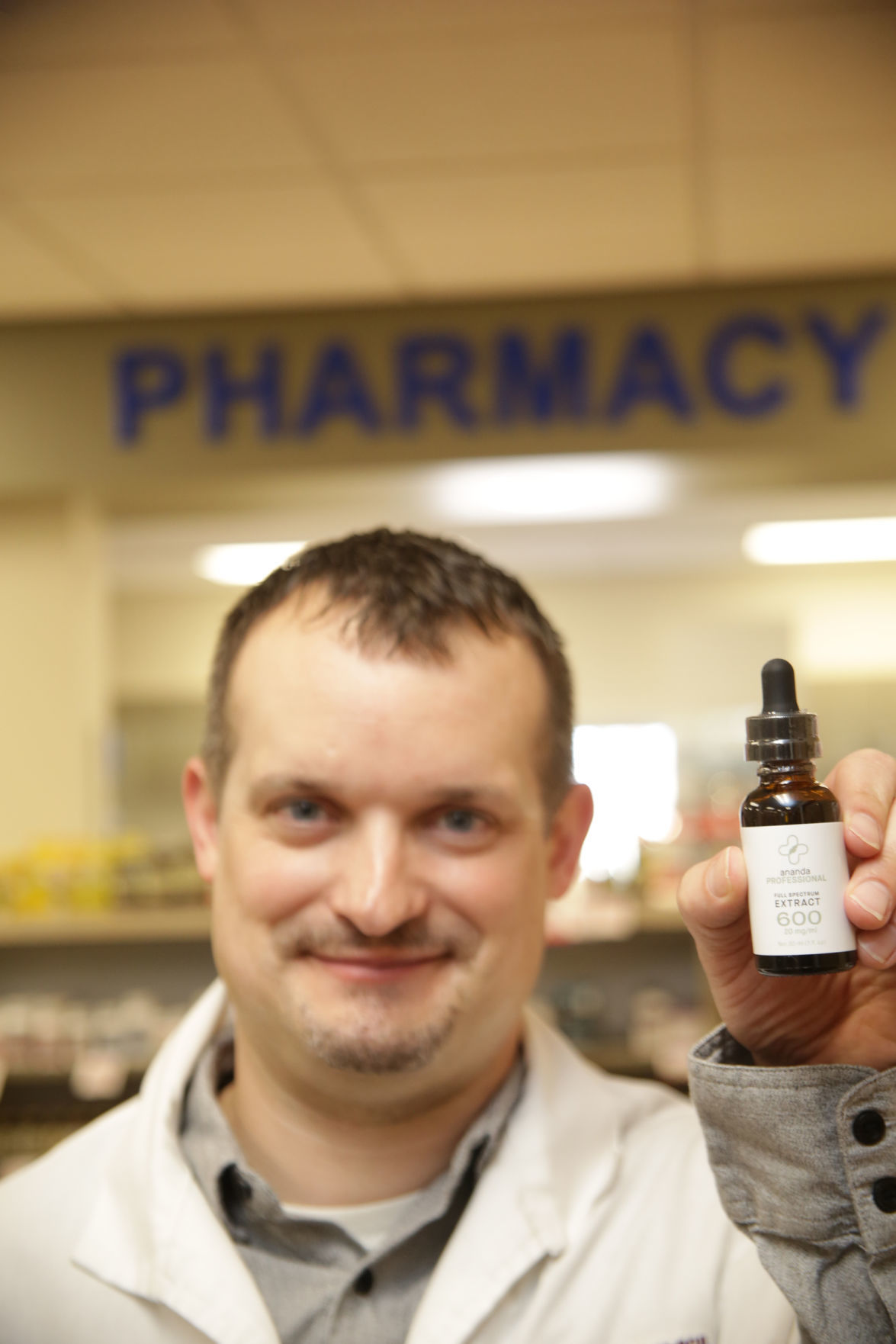 On March 21, Indiana Gov. Eric Holcomb signed into law Senate Enrolled Act 52, which legalized cannabidiol oil in Indiana. Both houses of the state Legislature had voted overwhelmingly in favor of the measure.

CBD hemp oil, derived from the hemp plant but with a lower concentration of high-producing THC than other cannabis products, is known to have pain-relieving and other health benefits. Now that it is fully legal to sell the oil in Indiana, the full range of its uses can be explored.

“We’ve been selling cannabidiol for over a year,” said LeeAnn Schreiner, a certified nutritional consultant at Nature’s Remedies in Valparaiso. “Just like we do with every product we sell, we thoroughly researched its risks and benefits.”

Schreiner explained that CBD oil has been around since 1940. “Earlier versions of the oil still contained high doses of THC, the compound that produces a high,” she said. “It took quite a while to refine a version that provided the benefits without that issue.”

Benefits include relief from pain, inflammation and anxiety, Schreiner said, backed by a report published in Medical News Today. How it works is interesting to researchers and medical personnel who want to understand such herbal remedies.

“The human body produces certain cannabinoids on its own,” said Nathan Damasius, pharmacist and co-owner of Vyto’s Pharmacy. “The body has two receptors for cannabinoids, called CB1 receptors and CB2 receptors.” Damasius explained that CB2 receptors are more common in the immune system and that they affect inflammation and pain. “CBD oil influences these CB2 receptors so that the body uses more of its own natural cannabinoids.” In effect, the CBD oil helps the body help itself.

Schreiner said many natural supplements and herbs behave in a similar fashion. “Flax seed and rosemary are two examples of natural supplements that trigger positive responses in the body,” she said. “CBD is a natural-growing herb, so it’s not a surprise that it works the same way.”

Damasius and his brother and co-owner, V.J., visited the farm in Kentucky where the hemp for their oil is grown. Like Schreiner and other medical professionals, they stay involved in the processing of CBD to feel comfortable about the quality of product they are selling.

CBD oil's effectiveness in combating inflammation is a major reason medical personnel turn to it, according to Dr. Jeffery Smith, a physician at Healing Arts Center in Valparaiso who specializes in the treatment of Lyme disease. “Children who suffer from epilepsy have found relief from seizures because of CBD,” he said. “Adults suffering from migraines, those with arthritis, and many similar maladies find relief because of the powerful anti-inflammatory properties of CBD.”

Smith cited epilepsy as an example: “Scientists have learned that some forms of epileptic seizures occur because brain inflammation causes a disruption of brain waves. The seizure happens when the brain waves can’t connect. CBD oil reduces the brain inflammation, and the connection is made properly. Seizures are reduced or even eliminated.”

In mid-April, an advisory panel recommended that the Food and Drug Administration approve a prescription form of CBD oil to treat two rare and severe types of epilepsy. The drug would be limited to treatment of seizures stemming from Lennox-Gastaut syndrome and Dravet syndrome in patients 2 and older. The FDA has indicated it would approve the drug, Epidiolex, for this limited use.

Type 1 diabetes is another disease linked to inflammation arising from immune system attacks on cells in the pancreas. Recent research posted in Clinical Hemorheology and Microcirculation found that CBD may ease the inflammation related to Type 1 diabetes. This may be the first step in finding a CBD-based treatment for the disease.

Initial research published in the Journal of Alzheimer's Disease found that CBD prevented a loss of social recognition memory, so those in the early stages of Alzheimer's won't lose their ability to recognize the faces of people that they know.

While it might sound like a miracle drug in the making, Damasius said it doesn’t work for everybody. “It’s really no different than any medication,” he said. “What works for one doesn’t mean it works for all. People’s makeup and chemistry is different, and results can vary.”

He also noted that regulation of CBD oil may be on the horizon. “We envision that one day it will be available through a prescription,” he said. “The dosage and quality would be regulated, which would be a good thing.”

To better understand all the risks and benefits, more research funding is needed, and Smith said several such efforts are underway. “We’ve only opened the door a little,” he said. “Hopefully, we’ll learn much more in the next few years.”

SOUTH BEND, Ind. — Indiana's efforts to eradicate wild industrial hemp will soon come to an end and cultivation of the plant could soon follow.

Here's a recap of the 10 most-read health stories of the year.

Jean Stevens' granddaughter called on a Friday and asked what she was doing the following Monday. Nothing, Stevens said. The granddaughter sai…

Marijuana-based drug gets positive review from US agency

SALT LAKE CITY — The push for legalized marijuana has moved into Utah and Oklahoma, two of the most conservative states in the country, furthe…

Approved for use in Indiana in 2018, CBD oil is easing pain and anxiety, improving sleep and treating specific medical conditions. Region doctors and pharmacists discuss its benefits.

Nathan Damasius, pharmacist and co-owner of Vyto’s Pharmacy, with the CBD oil it offers.