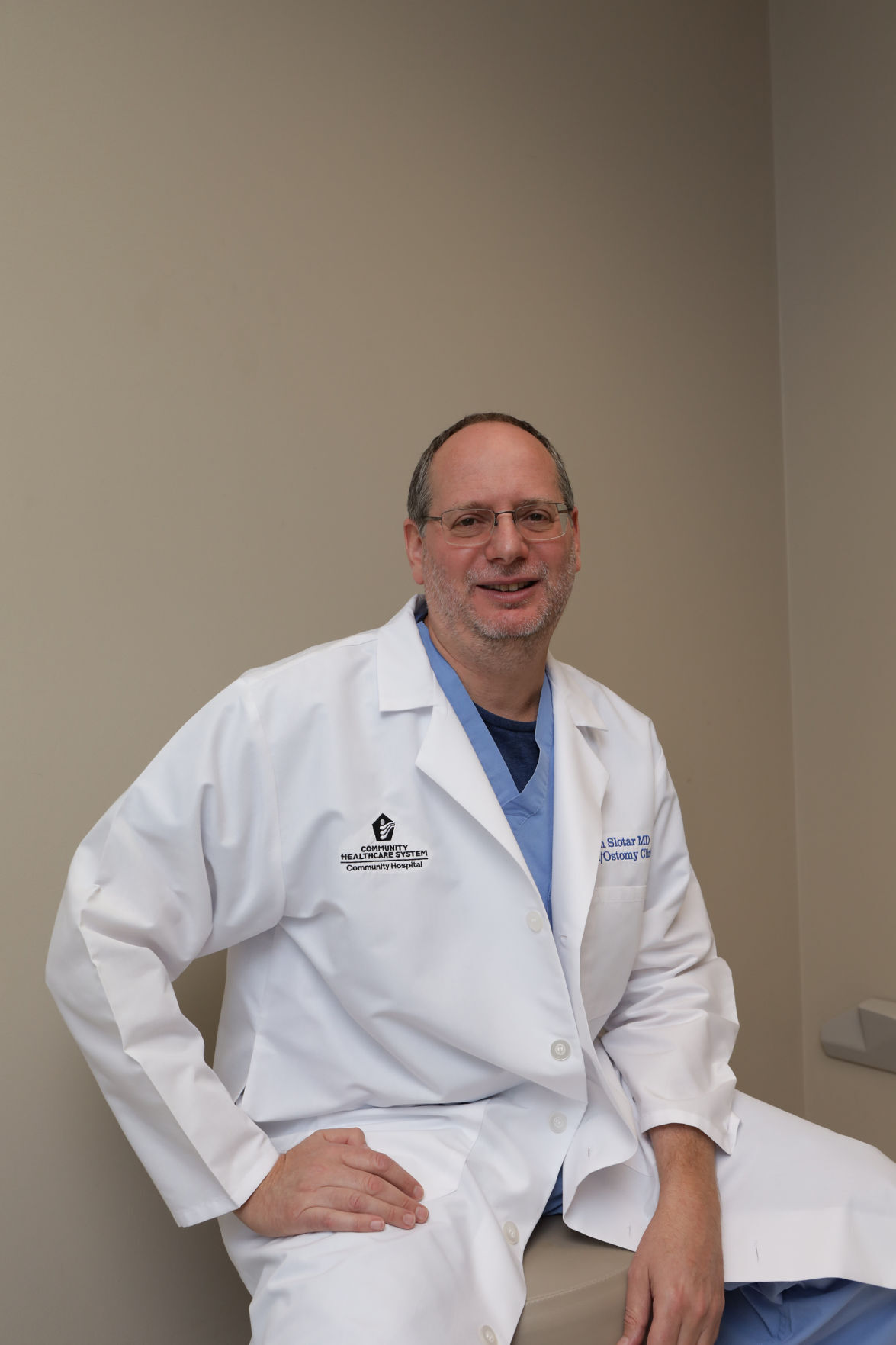 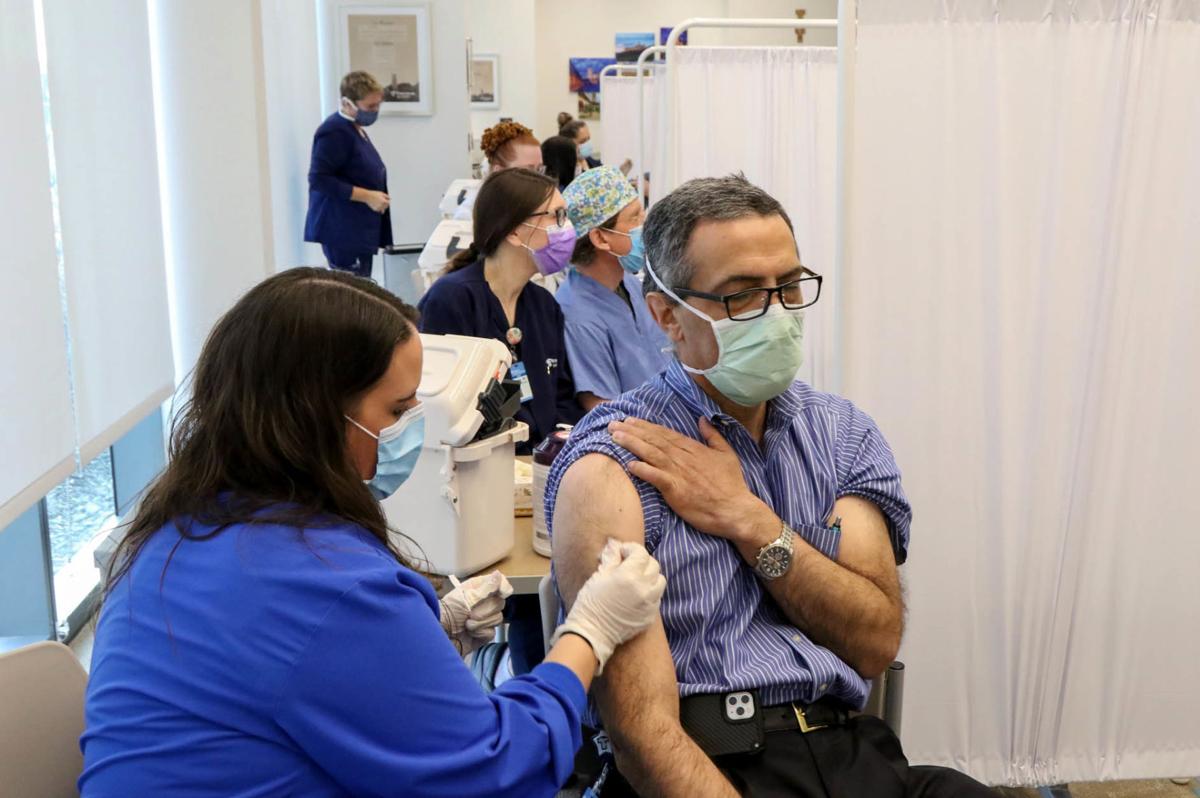 Dr. Dafer Al-Haddadin, an infectious disease physician at Franciscan Health Michigan City, rolls up his sleeve for a COVID vaccine.

Waking up to a cough, runny nose and fever can get the day off to a bad start.

It’s clear something is amiss, but what exactly has invaded the body and caused it to feel achy and run down isn’t always clear at first.

It's often a virus. But what is a virus?

We reached out to area infectious disease specialists to answer some commonly asked questions about viruses, how they affect people differently and how they are treated.

How does a virus infect a person?

A virus can enter a human in a variety of ways, whether through the mouth, eyes, nose or open wounds, says Dr. Dylan Slotar, a Community Care Network infectious disease physician on staff at Community Hospital, St. Catherine Hospital and St. Mary Medical Center.

“They can also be ingested via contaminated food or water,” he said, as well as animal or insect vectors.

“This allows the virus to then enter a human cell and program it to produce more versions of the same virus,” he said. “Eventually, the newly made virus kills and leaves the original cell to go on and infect more neighboring cells.”

The process repeats itself over and over, leading to sickness, he says.

How does a virus differ from a bacteria?

When causing an illness, most bacteria can survive and replicate by themselves outside of human cells, Al-Haddadin says.

“All viruses need to take over the cells of another living being in order to replicate and therefore survive,” he said.

Viruses can be thought of as microscopic parasites, Slotar says.

“Like all parasites, they lack the ability to reproduce outside of the host body,” he said. “While they contain the same types of genetic material — DNA or RNA — found in all life forms, viruses are unable to independently read and act upon the information contained within that genetic material.”

Instead, to reproduce, viruses must invade host cells and reprogram the host’s complicated machinery to make new viruses, Slotar said.

Why do viruses affect people differently?

Many factors go into why a virus impacts one person differently than another, says Chris Russo, a researcher at the University of Chicago who studies the immune system, viruses and viral transmission.

“Depending on the virus, age can be a big factor,” he says. “Influenza is very bad for the elderly, but also for very small children.”

“If and when you’ve been exposed to that particular virus or a similar virus in your life can affect your susceptibility,” he said.

How can doctors tell whether a person has a bacterial or a viral infection?

Many types of infections produce similar symptoms whether they are caused by bacteria or a virus, Russo says.

“In most cases, the only real way to know is a test,” he said. “The symptoms alone are not always enough to distinguish.”

How does a virus change in the body?

Think of the living being where the virus is replicating as a factory with poor quality checks, Al-Haddadin says.

As the virus replicates, or copies, mistakes are made. These are mutations that lead to a different genetic code, he said.

In the case of COVID-19, Russo says the virus will take advantage of some of the molecular machinery in the cell to replicate. “New viral particles will exit the cell and continue to replicate,” he said.

Can someone develop a natural immunity to a virus?

It depends on the virus, Al-Haddadin says.

“For example, the common cold and the flu have mutations that change the proteins on the virus surface,” he said. “Some viruses could provide natural immunity, such as hepatitis A, hepatitis B, chickenpox and measles.”

How does the body fight a virus?

The immune system is activated, eventually creating antibodies to neutralize the virus and prevent further infection of cells, Al-Haddadin says.

“Additionally, these antibodies ensure the next time the virus enters the body, it is targeted for destruction prior to it causing systemwide disease,” he said.

Can viruses be treated?

Most viruses cause self-limited illnesses, Al-Haddadin says. Some, such as influenza, herpes, cytomegalovirus and HIV, can be treated with medication.

“Other viruses do not have such targeted treatment and so the symptoms are treated instead, such as the common cold and gastrointestinal viruses,” he said.

When is it necessary to treat a fever?

The human immune system employs multiple layers of defense to fight this cycle of viral invasion and replication, Slotar says.

“Fever is part of a broad inflammatory immune response within the body triggered by viral or other types of infection,” he said. “A higher body temperature helps to create an inhospitable environment for the invading pathogens.”

“For these reasons, it can actually be counterproductive to treat fever,” he said.

However, persistent or high fevers in young children, the elderly or those who are immunosuppressed often will require medical attention, he said.

When the patient can't talk, these are ways to know your pet is ailing

Pets make wonderful companions and can be a welcome addition to any household. But what happens if your pet is under the weather?

Your body type can help determine your dietary needs

The eating plan is the one that works for you — your body type, activity level, genetic makeup, health and weight goals.

Raking, gardening and even pumpkin carving can help you keep in shape

With fall almost here, many of us want to know: How can we get the most out of fall activities?

Even people who've managed to steer clear of the COVID contagion face the stress and confusion of trying to manage the constant flow of shifting information.

Dr. Dafer Al-Haddadin, an infectious disease physician at Franciscan Health Michigan City, rolls up his sleeve for a COVID vaccine.