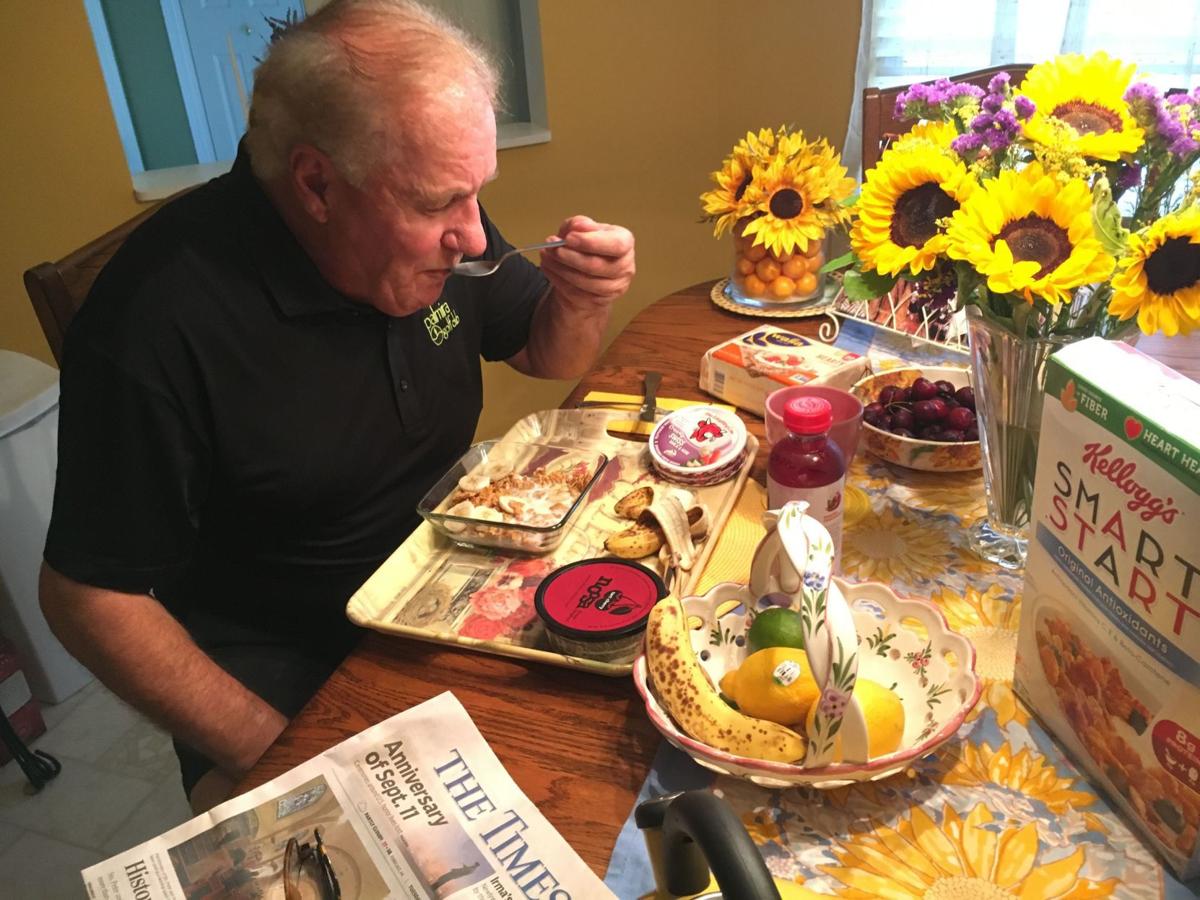 Tim Lawhead, a contestant in The Times' Lose 17 in '17 weight-loss challenge, eats a healthy lunch Wednesday at his Schererville home. 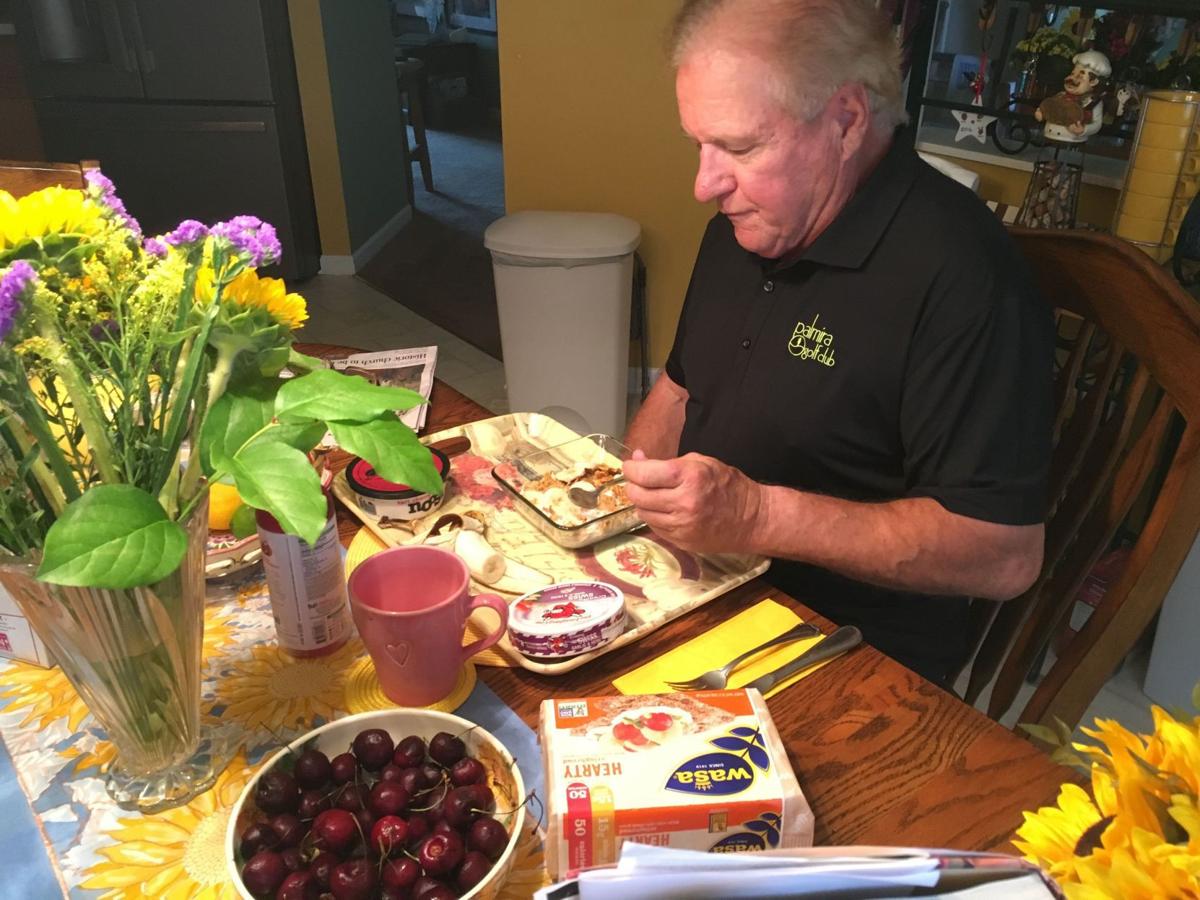 Tim Lawhead, a contestant in The Times' Lose 17 in '17 weight-loss challenge, sits down to eat a healthy lunch at home.

Tim Lawhead admits it's not easy losing weight when you're married to a gourmet French chef.

Yet he's done it.

Lawhead, a contestant in The Times' Lose 17 in '17 weight-loss challenge, has dropped 20 pounds since the beginning of the year, despite the temptations of his wife's cooking.

"The diet is very important, and exercise ... but the diet is probably No. 1," said Lawhead, 67, a Schererville estate manager.

"Because living with a French gourmet chef, food is very important to us. I grew up in a big family. My mother was pregnant 10 times, and seven survived. We never had a lot to eat. I never knew what good food was until I met Emily 33 years ago."

Lawhead's weight loss started off slow to begin the year. He'd lose a few pounds then put them right back on. He became motivated after reading recent Lose 17 in '17 stories in The Times.

"I finally got in gear once I saw your newspaper articles," he said. "I ran into a woman I met at the first weigh-in. She lost 43 pounds. I used the other 16 contestants as incentive."

He and his fellow participants have lost more than 400 pounds in 2017 in large part by switching to more nutritious diets. Some have made subtle changes while others have radically altered what they eat.

Ashlee Johnson, programs supervisor for Franciscan Health Fitness Centers in Chesterton, said it's important that people trying to lose weight to vary their diets so their bodies "don't get bored." And once people are at their ideal number, she said, they won't require as big a calorie deficit but should still pay attention to how much food they're consuming.

"I tell people that have reached their goal to try to eat good 90 percent of the time and allow yourself that 10 percent of not worrying about it," she said. "Just always make sure that if you are going to have a day where you know you might be eating more or not as well, that you still watch your portion sizes and try to exercise that day, too."

For the past few months, Schererville retiree Barb Swanson, who has lost 27 pounds this year, has been trying so-called intermittent fasting. She goes 14 hours before eating her last food at night before her first bite in the morning.

"I simply note each night when I finish eating, and then adjust my first food the next morning to 14 hours past that time," said Swanson, 69. "So if I am with friends and eat until 9 p.m., then I eat nothing the next morning until 11 a.m."

Traci Hanley, a Griffith stay-at-home mom who has shed 44 pounds, has cut out fast food, second helpings and every-night ice cream. She eats veggies in place of pasta, makes rice out of cauliflower, and portions out her snacks ahead of time so she doesn't overdo it.

"I have my cheat days, but during the week it's clean eating and mindful eating," said Hanley, 47.

Ray White, of Griffith, has dropped 49 pounds by walking more and eating better.

"It's definitely a combination of both," the 52-year-old funeral home operator said. "You've got to watch what you're eating — I eat more vegetables now — but you have to exercise. You end up feeling better when you do it."

But the changes to his diet have been crucial to his weight loss.

"Carbohydrates — I've either cut them out or reduced them so much. I may have a potato once a month, but it's only half," he said. "I eat a lot more vegetables, chicken, fish. I cut out all the pop. I drink more water and stuff like that."

And the results have been palpable. For one, he's been able to stop taking his 100-milligram, twice-a-day blood pressure medication because of the improvement in his health.

"I actually wake up in the morning and I don't ache," he said. "I used to ache every morning getting out of bed."

The arrival of apple season is a worthy consolation prize for the departure of summer.

The Unnatural-born Athlete: A compromise

It's been nearly three months since I last filled you magnificent readers in on my unnaturally-born athletic gifts.

Brady in TV interview: Concussions part of 'the physical nature of our game'

Selena Gomez recently received a kidney transplant from television actress Francia Raisa due to her struggle with lupus, the actress-singer re…

Darin Bensinger doesn't believe he could have completed a 5K a year ago.

Ready to get healthy? Enter The Times' Lose 18 in '18 weight-loss contest

In 2017, The Times challenged 17 Region residents to lose at least 17 pounds, with the person dropping the highest percentage of his or her bo…

When Barb Coggins, a contestant in The Times' Lose 17 in '17 weight-loss contest, went in for her monthly weigh-in for August, she was disappo…

Darin Bensinger went on a 30-mile bike ride the other day, as well as a three-mile run. He says the warm weather has helped get him more activ…

Marlene Biesboer recently returned from a trip to Wisconsin. She leaves soon for Walt Disney World. In August, she heads to Branson, Missouri.

Tim Lawhead, a contestant in The Times' Lose 17 in '17 weight-loss challenge, eats a healthy lunch Wednesday at his Schererville home.

Tim Lawhead, a contestant in The Times' Lose 17 in '17 weight-loss challenge, sits down to eat a healthy lunch at home.