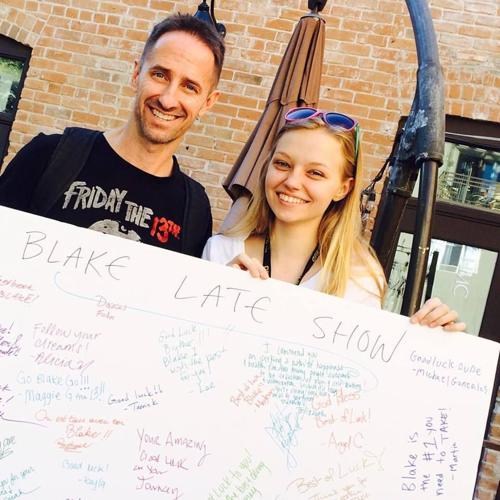 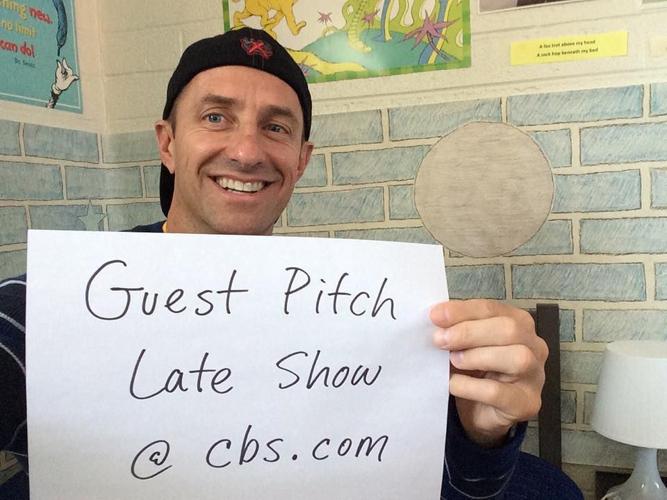 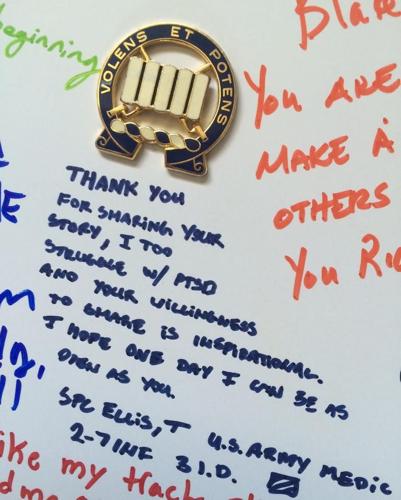 A soldier who also has post-traumatic stress disorder wrote this message on one of Ron Blake’s boards.

A year ago, Ron Blake was suicidal, still dealing with the trauma of being sexually assaulted years earlier.

He was watching television one night, when "The Late Show with Stephen Colbert" came on. Blake laughed. He realized it had been a long time since he had done so.

It was a breakthrough moment for Blake, a Gary and Hobart native who now lives in Phoenix. He acknowledged that he needed to laugh more and get out of his house. He made it his goal to reach other people who may be isolating or suicidal from post-traumatic stress disorder. He planned to try to get on "The Late Show."

"I used to be gregarious, very social, but because of my PTSD I became somebody absolutely different," said Blake, 47, a former Hobart city councilman. "In the last year, it's like I had to learn how to walk again. I forced myself to go out every day and talk to people."

Blake, who was born in Gary and graduated from Hobart High School in 1987, started traveling and speaking about PTSD, bringing with him large message boards to have people sign. Across a half-dozen states, he has since filled roughly 300 boards and gotten about 20,000 signatures in more than 80 languages, including from members of Congress, mayors and professional athletes. He posts photos of his journey on his Facebook and Instagram accounts, both called Blake Late Show.

He has spoken at colleges and before civic organizations. Students at Arizona State University did a documentary about him. His story has been told on the local TV news. He has been invited to speak before the Arizona governor's commission on sexual assault.

During his travels, he has heard from people with PTSD who said they hoped to one day garner the courage to speak out as well. Sexual assault survivors have shared their stories with him.

"If people understand PTSD better, they're going to be able to better help people with PTSD," he said.

Last year around this time, Blake was contemplating suicide because he no longer wanted to burden his friends and family with the symptoms of his PTSD. But what a difference 12 months makes. Blake said he's doing much better now, including going to therapy on a regular basis. He recently got married.

Blake still hasn't been invited on "The Late Show," but said that mission is more symbolic than anything else. It's about, when you're struggling, striving toward a goal and finding something in your life that you enjoy.

"'The Late Show' is going to come and go, but it's more about what it represented for me," Blake said. "During tough times, there's usually something close to us that helps us get through it. It can be a book, a spouse, a pet, a food. We're looking for a miracle to get us through it, but it usually turns out to be something close to us.

"You have to grab onto those moments. I realized there was hope for me because I was laughing, now what am I going to do with this? Why not try to get on the show? It's a huge ambitious goal. It was more so that I recognized there was something hopeful in my life and I grabbed onto it."

It’s that time of year when turkeys are stuffed, tables are adorned with all the fixings, and a piece of pie is the perfect way to top off you…

VA doctor to Portage veterans: 'Resilience is the norm'

PORTAGE — While the war in Vietnam has been over for 40 years, more of that era's veterans are seeking help for mental health issues.

Sandy Roth, a nurse at Franciscan Health hospital in Crown Point, thought she had the flu.

HAMMOND — When Michael Vela started losing patches hair after serving in the first Gulf War, his doctor said the likely culprit was post-traum…

VALPARAISO — “My being was hurt from having to engage in combat. Those scars are in your conscience and morality and faith and understanding o…

Medical marijuana an option for some in the Region, not others

CROWN POINT — Carla Wirick’s doctor says she would be a perfect candidate for medical marijuana.

A soldier who also has post-traumatic stress disorder wrote this message on one of Ron Blake’s boards.