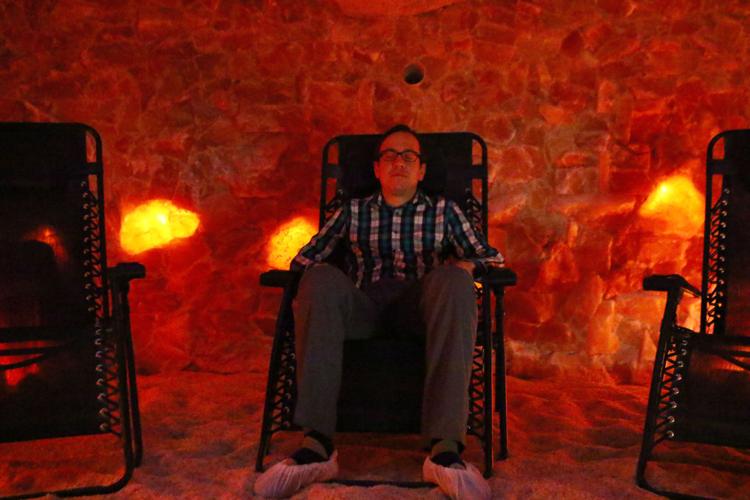 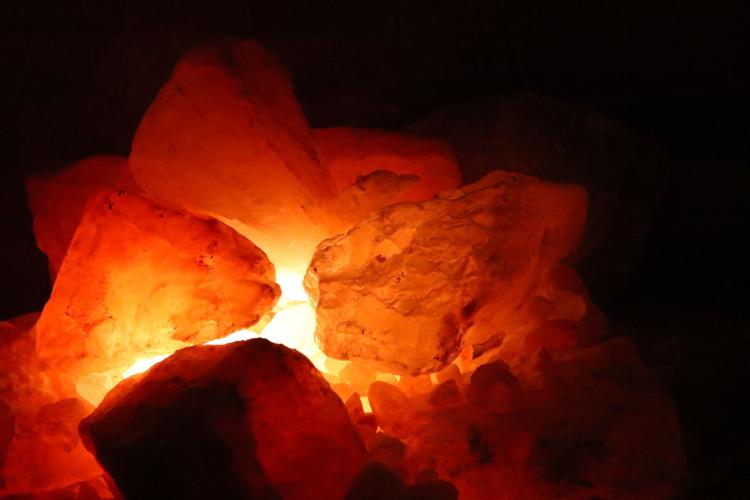 Salt rocks are shown inside the salt cave at Halotherapy of St. John. 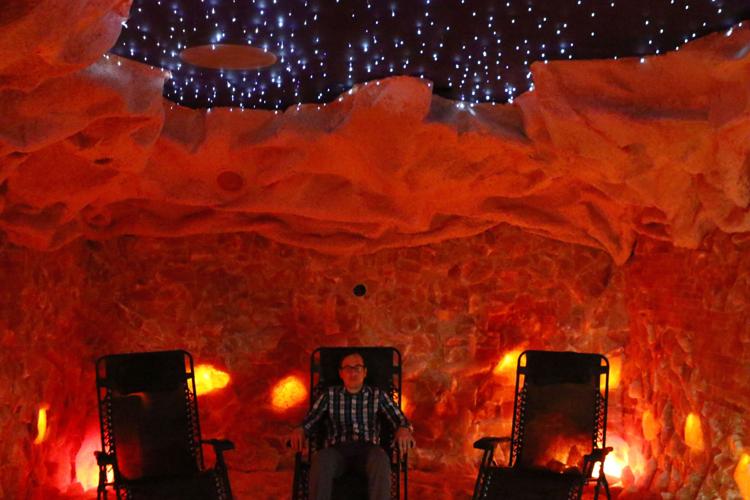 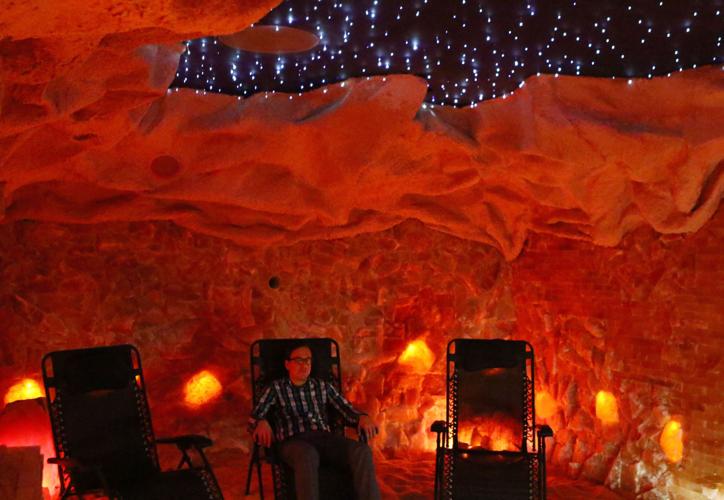 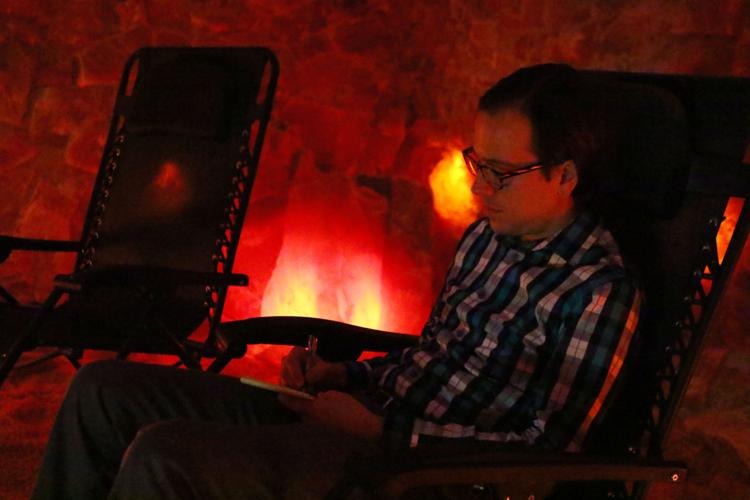 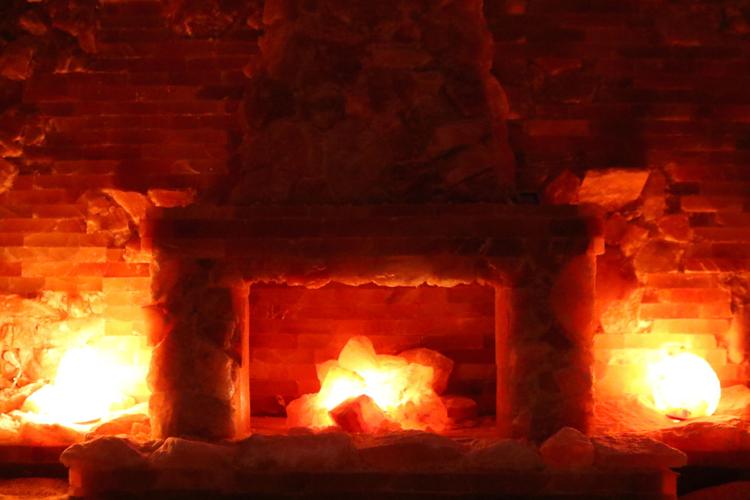 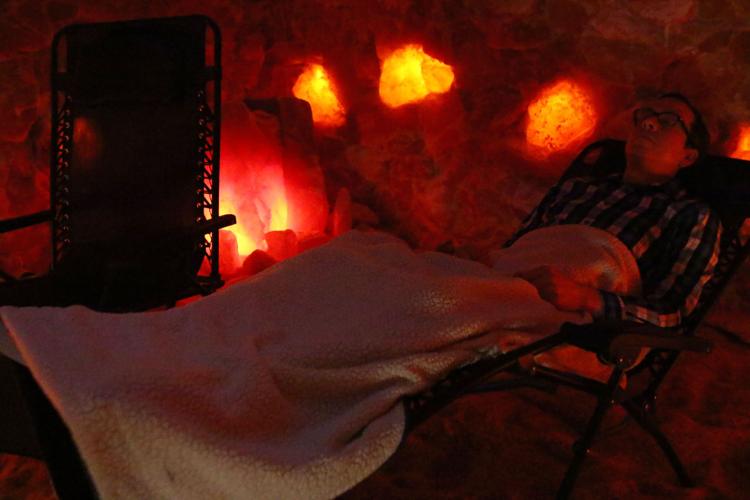 Times health reporter Giles Bruce takes in the experience of the salt cave in St. John. 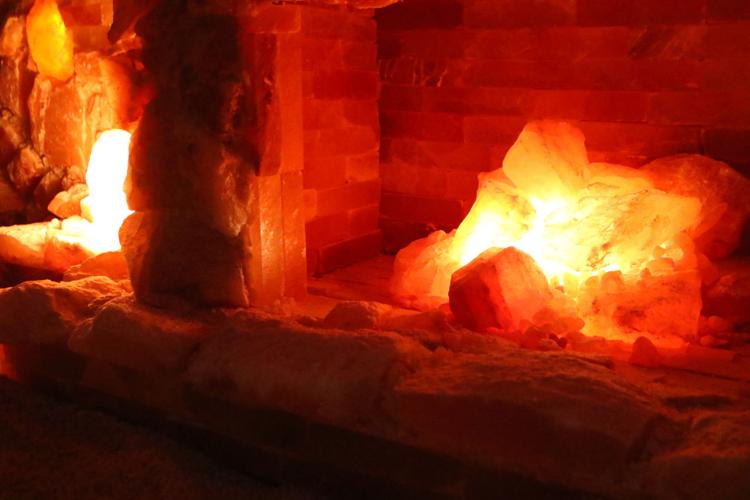 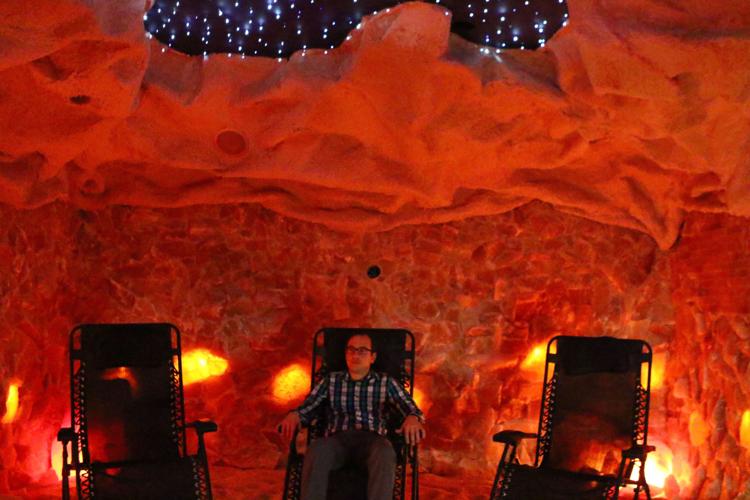 ST. JOHN — I sat on a reclining lawn chair surrounded by 20,000 pounds of salt shipped in from the Himalayan mountains, salt underneath my feet, salt on the walls, salt being pumped into the air, salt lamps providing the light.

I didn't want to leave.

I was trying halotherapy, a form of alternative medicine involving exposure to salt-laden air, at Halotherapy of St. John, the Region's first salt cave.

"Lay back, let the music play and let the salt take you over," employee David Dunning said before shutting the door to the cave.

I reclined back in my chair, classical music pumping through the speakers, fake stars on the ceiling, and let the salt cave engulf me.

One of the first things I noticed was that I was able to breathe more deeply than I had in some time. It's that time of year for allergies and colds, so this came as a welcome relief.

I could see the clouds of salt pumping from the vents. I could taste it if I breathed through my mouth.

I don't know whether it was the salt or the ambiance, but I felt relaxed. So much so I drifted in and out of sleep.

Salt therapy may be new to the Region, but it's been around for more than 150 years. It originated in the 19th century, when a Polish physician discovered that people who worked in salt mines had fewer lung and skin problems than coal miners. About a century later, a German doctor noticed that World War II soldiers hiding out in salt caves had improved health.

Now, the spa versions of salt caves exist all over the world.

There have been no clinical studies of halotherapy in the United States, though research in the New England Journal of Medicine in 2006 found that people with cystic fibrosis who inhaled hypertonic saline had improved lung function. On the flipside, the Asthma and Allergy Foundation of America says breathing in salt could constrict the airways.

Regardless of what the research says or doesn't say, some people in Northwest Indiana swear by salt therapy.

Two women from Highland — Peggy Franiak and Donna Zehner — sat across from me during the recent session.

"When I came in here I was huffing and puffing," Franiak said afterward, taking off her sock covers and putting back on her shoes. "And now" — she took a deep breath — "I can breathe."

She said that usually when she lays on her back, she feels like she's choking. Not on this day.

"I have asthma," Zehner said. "When I'm in there, I can actually take that deep breath and feel the lungs expand."

She already has done a few sessions and says the effects last for days after, when she is less reliant on her inhaler.

Beyond that, she said the treatments are simply relaxing, akin to a massage. She said her mind stops racing when she's in the cave.

On these last two points, I can attest.

Co-owner Allan Updike opened the business after looking for treatments for family members with allergies. He learned about halotherapy and visited a salt cave in Illinois. After he walked out, he said, his sinus headache was gone.

The 45-minute sessions cost $30 a piece. Updike said the business treats lifelong smokers, young people with acne problems, and athletes who want improved breathing function. He noted that insurance pays for the therapy in countries like the United Kingdom and Canada but not the U.S.

"I would be out of breath by now," Franiak said after her session, walking back from the bathroom. "That short little trip."

The science on salt therapy may be unsettled. But anecdotally, during my treatment I could breathe better and felt super relaxed. And I didn't want the session to end.

Northwest Indiana residents use hypnosis to improve their health

I sat on the comfy, velvety recliner, nervous, as I was told to relax. Deeply relax.

Northwest Indiana residents use hypnosis to improve their health

I sat on the comfy, velvety recliner, nervous, as I was told to relax. Deeply relax.

DYER — It's easy to feel intimidated and judged at the gym, amid the bodybuilders and toned bodies.

It's that time of year again, when people look in the mirror at their post-holiday waistlines and racoon eyes — and decide they need to get ba…

For those 2019 New Year's resolutions, try these 11 workouts and health treatments in Northwest Indiana

It's that time of year again, when people look in the mirror at their post-holiday waistlines and racoon eyes — and decide they need to get ba…

I found heaven in a whirlpool in Michigan City.

Northwest Indiana's first salt cave, a spa-like setting where people sit and breath in salt air for relaxation or for therapeutic purposes, ha…

SCHERERVILLE — I, apparently, am a warrior.

Ommmmmm ... neighhhhhh ... You can do yoga on a horse in LaPorte

Salt rocks are shown inside the salt cave at Halotherapy of St. John.

Times health reporter Giles Bruce takes in the experience of the salt cave in St. John.