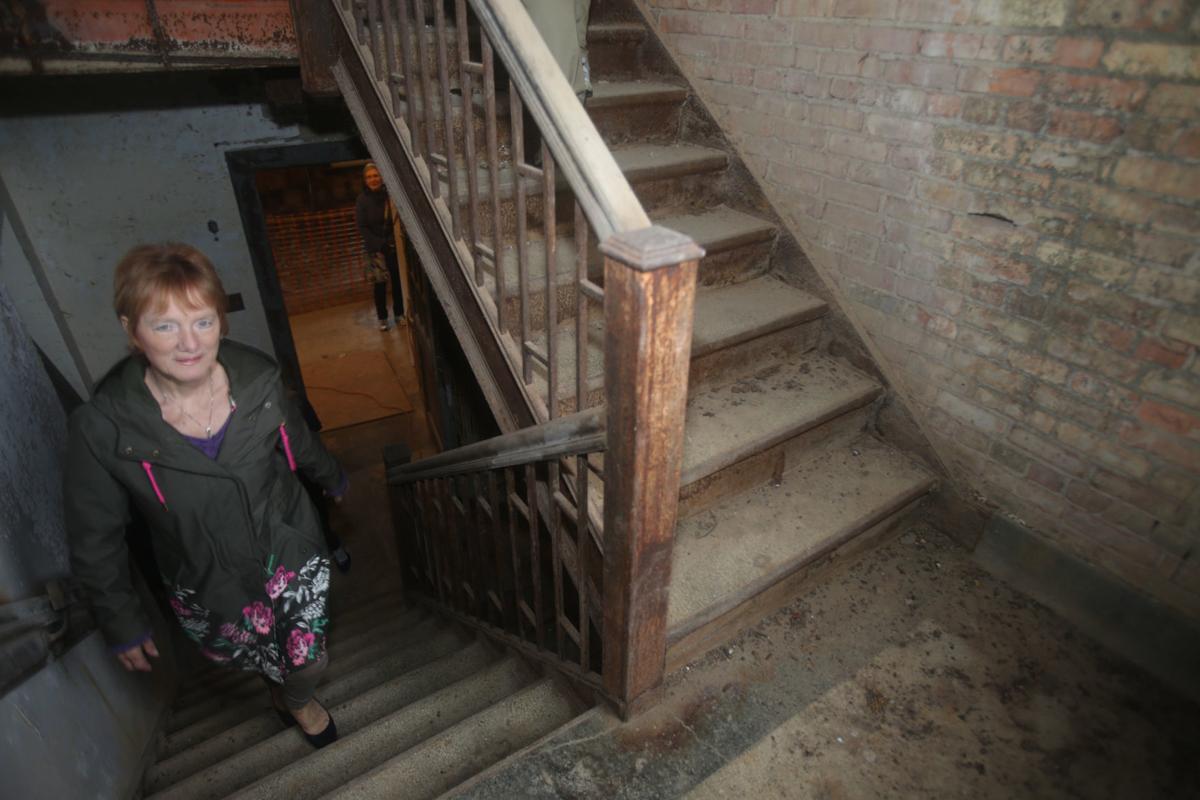 CEO Gloria Tuohy ascends the stairway of what will be the new home of the Indiana Ballet Theatre in a 2017 photo. 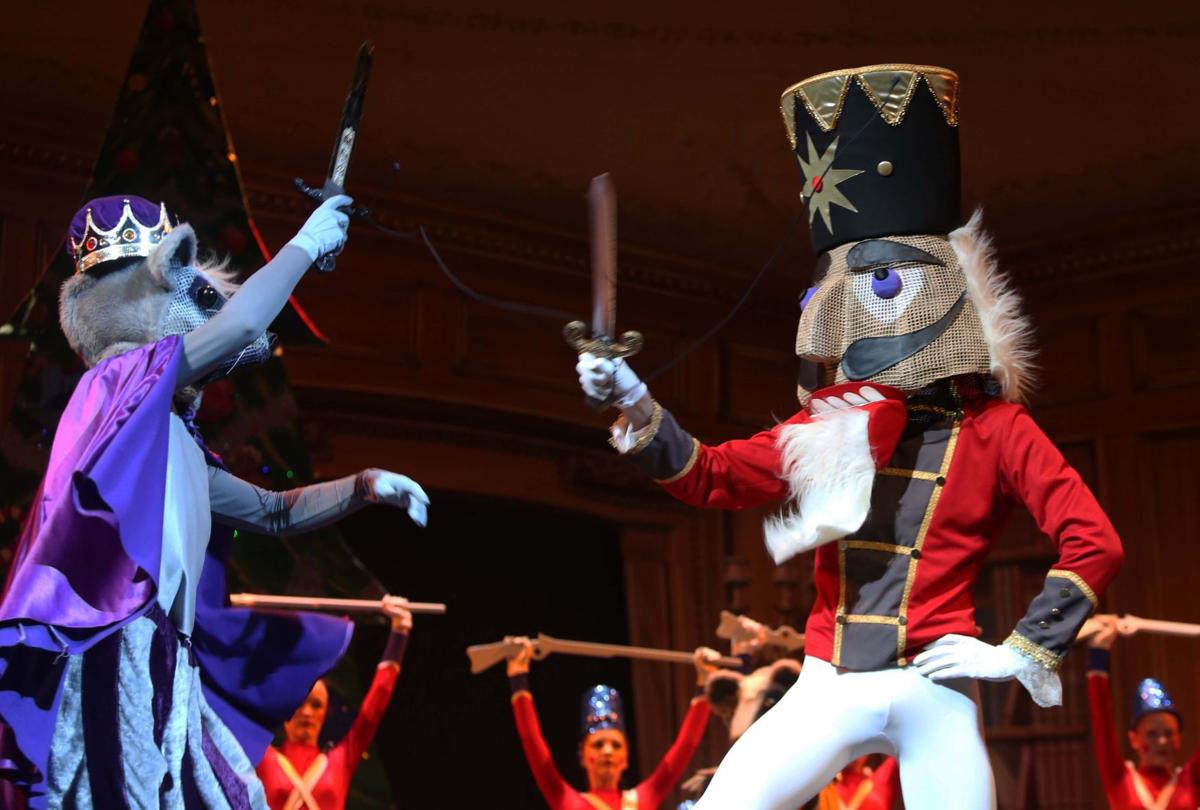 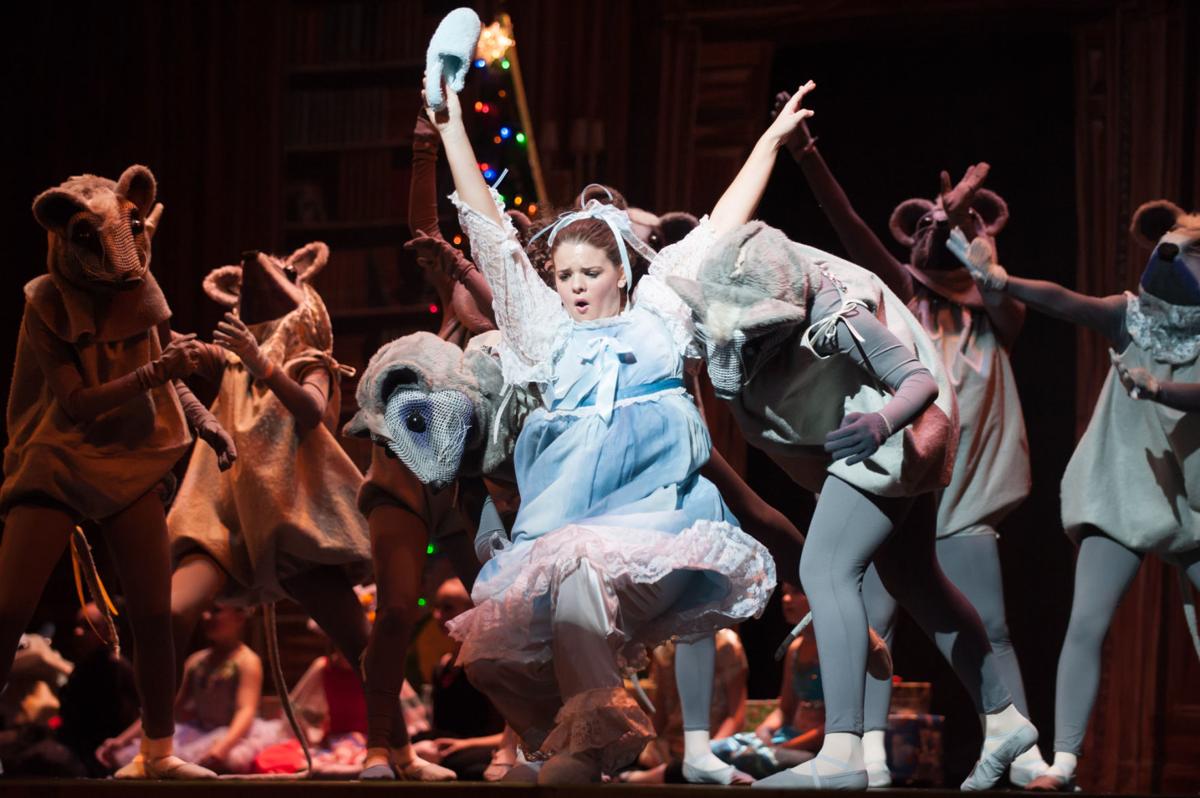 Dancer Lindsey Lanham, playing Clara, is thrown about by the Rat King's minions during a 2014 Indiana Ballet Theater performance of "The Nutcracker." Lanham is now a student at Loyola University Chicago. 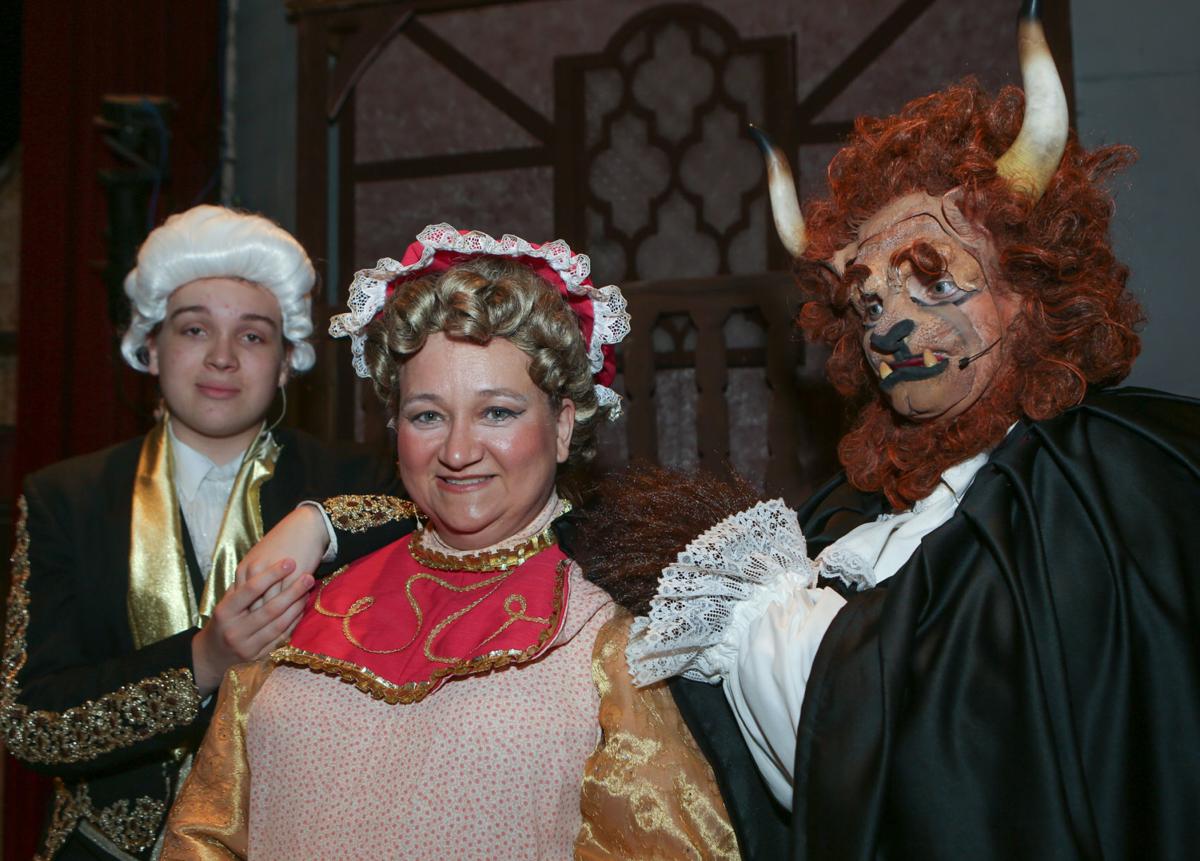 Melinda Reinhart poses with her sons Lucas and Jacob Reinhart in character for a Ross Music Theatre production of "Beauty and the Beast." 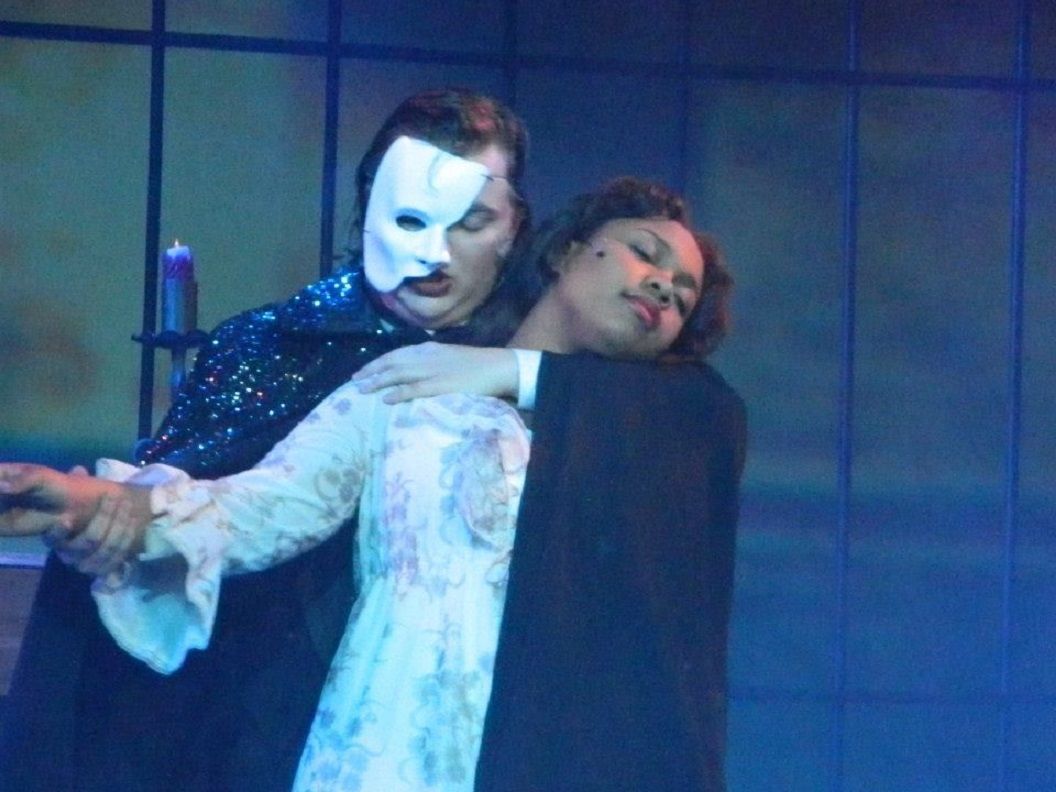 The Phantom (Jacob Reinhart) tries to convince the object of his affection, Christine (Scarlett Smith), that they belong together in a 2015 Ross Music Theatre production of "Phantom of the Opera" at Merrillville High School. 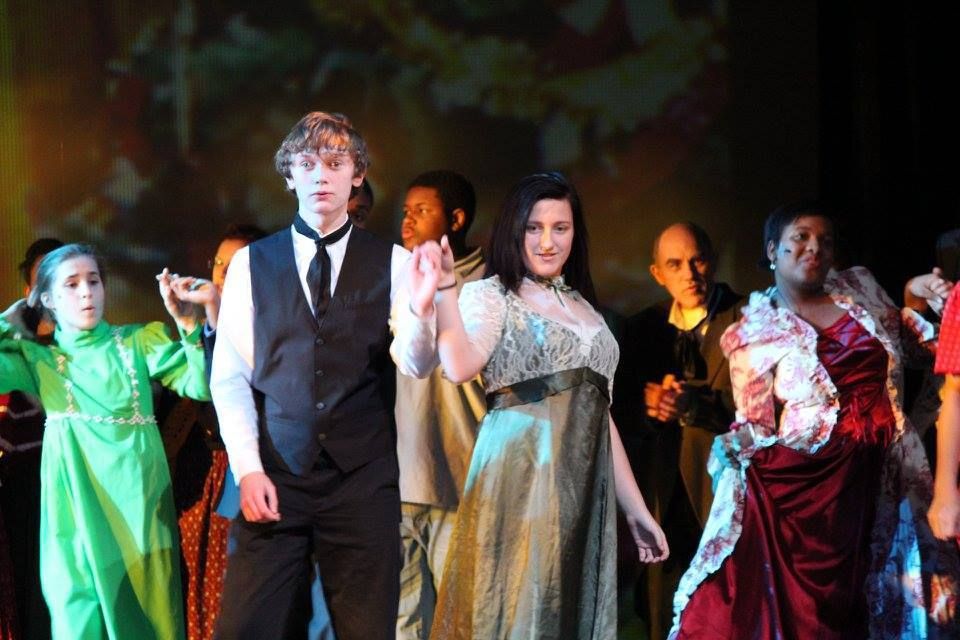 A scene from Ross Music Theatre's 2015 production of "Scrooge, the Musical."

The performing arts are alive and well in Merrillville thanks to the Indiana Ballet Theatre and the Ross Music Theatre.

Gloria Tuohy started the IBT 40 years ago because she needed money to go home and visit family in England. She moved to the U.S. in 1973 and settled in Illinois. In 1978 she moved to Lakes of the Four Seasons. She started what was then called Imperial Ballet in her basement, teaching children ages 3 and up.

The name came from a syllabus of ballet methods of teaching called The Imperial Society of Teachers of Dance. The class grew, and she added tap and modern jazz. She also got more teachers and a new location, moving to a storefront at Lakes of the Four Seasons in 1992 and adding other locations in Merrillville, Valparaiso, and DeMotte.

The big change came in 1998, when she went to the Star Plaza and asked whether she and her students could stage the holiday favorite “The Nutcracker” at the theater.there. Her request was timely because the Arie Crown Theater’s production of the ballet in Chicago had lost its funding and ended that year.

“I had no funds and no sponsors,” Tuohy said. “I put the deposit for using the theater on my charge card.”

Planned as one show, it quickly sold out and two more shows were added for the first day and another for the following day.

“I was able to repay the charge card with no problem,” she said.

She’s been staging “The Nutcracker” every year since, but, with the  demolition of the Star Plaza this year, she’s had to move the production to three locations: Crown Point High School, Valparaiso High School and Indiana University Northwest. Instead of four shows in front of a total of 6,000 people, her students will be doing 12 shows in somewhat smaller venues.

In the spring, the IBT does one of nine ballets at area schools, this year traveling to Lake Central High School to present “Sleeping Beauty.” Other ballets in the series include “Swan Lake,” “Cinderella,” and “The Gay Parisienne.”

The IBT also does a modern contemporary dance concert each year that Tuohy described as similar to Chicago’s Hubbard Street Dance. The students keep busy performing Irish dancing and recitals, and each August they do “A Touch of Dutch” with wooden shoes. Tuohy now includes classes for youngsters with autism, Down syndrome and other special needs.

Among her students is Lindsey Lanham, of Dyer, who began taking classes when she was 3 and has continued on after graduation from high school.

“It’s a big part of me, and I can let it go,” said Lanham, now 21 and a student at Loyola University Chicago. “When you graduate from high school, it seems like people move away. It’s very therapeutic to come back and dance. I also enjoy mentoring the girls and teaching.”

She is getting a law degree but plans to continue dancing. Lanham will be in one of the three casts for “The Nutcracker,” one cast for each location, and she said. “It’s mentally exhausting, but it’s a euphoric feeling being on stage that makes it all worthwhile.”

Another fall tradition is the Sugar Plum Tea Nov. 17 at the Lake County Fairgrounds. It features the Sugar Plum Fairies from “The Nutcracker” along with Mr. and Mrs. Claus. More information is available at the IBT Web site ibtnw.org.

The Ross Music Theatre was launched in 1964 by Jerauld Reinhart, Merrillville High School choir director, to keep students singing through the summer. What began with a production of “Annie Get Your Gun,” sponsored by the Optimists Club of Merrillville, has continued to the present day under the direction of Reinhart’s son Michael and Michael’s wife, Melinda.

The early productions were done in the gymnasium, but, in 1973, the Reinhart Auditorium was built. Melinda said Jerauld called on experts to help design the state-of-the-art facility so it now is the gold standard other schools use to design their auditoriums. On a handful of occasions, the summer productions were interrupted by school construction projects, but Jerauld continued to work with his son and daughter-in-law after his retirement until shortly before his death in 2014.

“Dad was way ahead of his time with (the auditorium design),” Melinda, the school’s current choir director, said of Jerauld. “He taught me how to draw scenery, and I learned so many other aspects from him.”

She said the quality of the shows are such that people think adults are brought in to assume the rules instead of the students or that the cast is lip-syncing the songs. Some have even claimed the orchestra fakes playing the music.

“We’re very proud of the quality of the shows,” Melinda said. “We’re one of the best kept secrets in Northwest Indiana. Our spring musicals are not the typical high school musicals. We’ve done ‘Phantom of the Opera’ with the same score you’d hear if you went to New York.”

They were the first to take two of their musical productions to the Star Plaza, but Melinda said the Star Plaza wasn’t big enough to hold the production the way the students did it at the Reinhart Auditorium. The couple also operates the Center Stage Studio Theatre in downtown Hobart, where they do smaller shows a couple of times a year when the auditorium is busy.

The students have done “Scrooge, the Musical” for several years at Center Stage with one show the Friday after Thanksgiving and three more the following weekend. Melinda plays Mrs. Cratchet, and she said one of her sons played Tiny Tim until he was no longer tiny. They also put on a radio show version of “It’s a Wonderful Life” called “Merry Christmas, George Bailey” and, starting last year, a radio version of “Miracle on 34th Street.” Both will be presented Dec. 15.

“We don’t get grants or handouts to support the shows. We need community support to continue,” she said. “Our shows go above and beyond, and people need to come out and try it for themselves.

Are high school students ready to determine their career paths?

Merrillville's Parks and Recreation Department has something for everyone.

Get ready to shop, lunch and watch local models walk the runway at the TradeWinds annual Luncheon and Style Show.

Alice Flora Smedstad’s relatives crossed the Atlantic aboard the Mayflower and other ships of the time, and by the early 1800s some were on th…

Merrillville officials put it all together to spark growth

With a population of more than 35,000, Merrillville has grown 16 percent since 2000, according to City-Data.com.

CEO Gloria Tuohy ascends the stairway of what will be the new home of the Indiana Ballet Theatre in a 2017 photo.

Dancer Lindsey Lanham, playing Clara, is thrown about by the Rat King's minions during a 2014 Indiana Ballet Theater performance of "The Nutcracker." Lanham is now a student at Loyola University Chicago.

Melinda Reinhart poses with her sons Lucas and Jacob Reinhart in character for a Ross Music Theatre production of "Beauty and the Beast."

The Phantom (Jacob Reinhart) tries to convince the object of his affection, Christine (Scarlett Smith), that they belong together in a 2015 Ross Music Theatre production of "Phantom of the Opera" at Merrillville High School.

A scene from Ross Music Theatre's 2015 production of "Scrooge, the Musical."