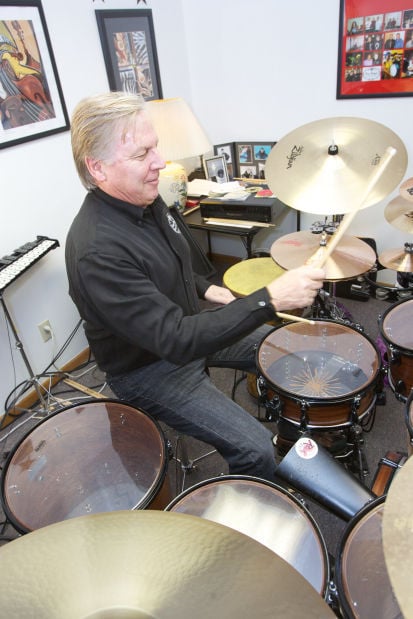 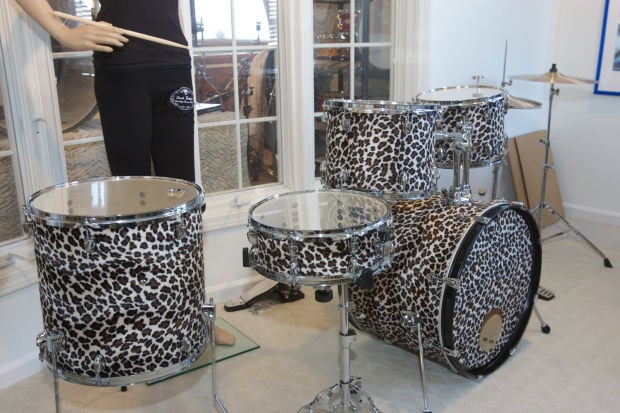 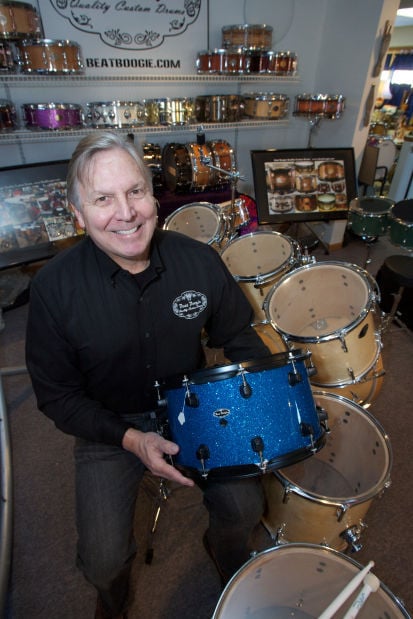 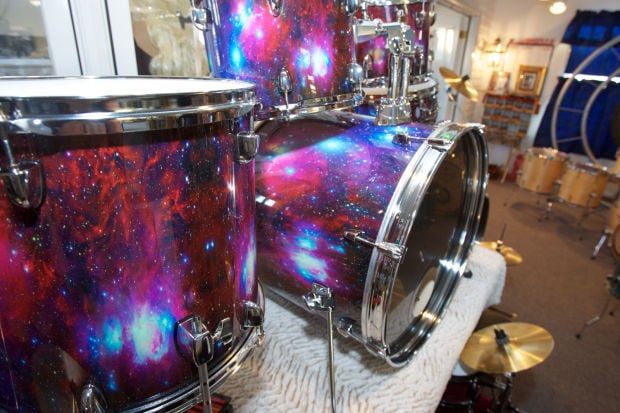 A drum kit at Beat Boogie Drums displayed in the Schererville store showroom. 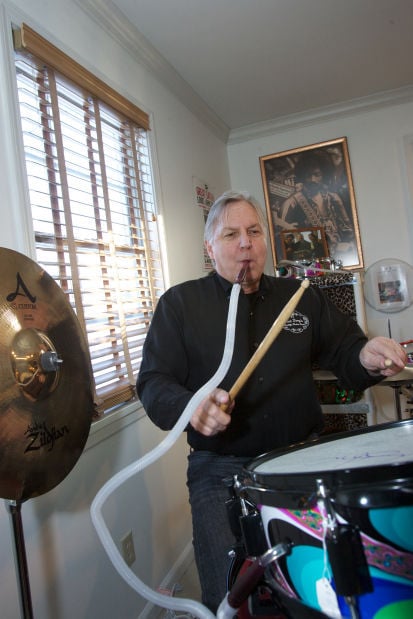 Steve Crabtree plays one of the breath-controlled snare drums he invented.

Beat Boogie Quality Drums owner Steve Crabtree has loved drums since he was a young boy and heard Sandy Nelson’s classic “Let There Be Drums” for the first time.

“I was smitten and now Sandy Nelson is playing a snare drum that I built for him,” Crabtree explains.

Growing up during the golden era of rock and roll, Crabtree received his first snare drum in the early 60’s. Five decades later Crabtree has become a custom design drum builder, percussionist and drummer who has made drum sets for many celebrities.

Crabtree said his first snare drum was held together with springs.

“Being one of ten living in a house on the south side of Chicago taught me the persistence to stick with it. This was just prior to the ‘British Invasion.’ There was a group of musicians who would get together and jam in a garage near our house. The drummer had a maestro snare and high hat.”

“It was like throwing gas on a fire,” Crabtree says. “Gene Krupa and Buddy Rich were a big influence. That maestro snare became my next level drum for about $7.50 cents.”

The first wave of classic rock had landed on American soil: the Beatles, Rolling Stones, Dave Clark Five and the Zombies.

“My next snare was a jump to a silver sparkle Ludwig,” Crabtree says. “Soon it was a red sparkle Kingston drum-set. It was The Who, Cream, Jimi, The Doors, Big Brother, just non-stop great music.” After that there was a Ludwig kit and set of Premiers.

“I played in a few rock bands in the later 60’s and began working with original rock bands in the `70s and `80s but the brass ring was nowhere to be found. Later I worked for a gear manufacturer in Chicago and became a product manager for a gear line that I sold through distributors. I enjoyed the challenge of seeing the production of parts to the packaging and shipping, the cold calls and selling to a bigger and bigger distributor base.”

Crabtree took what he learned along the way and put his efforts into the Beat Boogie Drum line. He likes working directly with the musicians. “I network with them on-line, in person, from my trunk, whatever it takes. I have an opportunity to make a rim-shot heard round the world with my Beat Boogie Psychedelic Air Drum.”

A video of the Psychedelic Air Drum is available on the company website at http://www.beatboogie.com.

“If it works out it will send ripples throughout the industry,” Crabtree says. “If it doesn’t, I’ll continue to be a boutique drum builder. My dad once told me that I have this little target way out in outer space and that it’s going to be difficult to hit it. He said to bring it in closer and make it a bigger target.”

Crabtree's passion for drums led him to become a boutique drum builder.“In March of 2010 I created my first snare drum and wanted to offer an affordable primary or alternate snare drum that has bling and pop,” he says. “Most drummers own more than one snare drum as they are the most integral part of a set. It requires a lot of work and time to build and assemble drums, for example a typical snare drum uses over 240 components depending on the type of lugs used. It requires over 40 holes to be precisely drilled. I’ve taken a similar approach to the drums sets I build and use wood, steel, assorted retro wraps and wood veneers." On account of what started as a hobby, Crabtree now provides drums for many regional musicians---who play in many musical genres---as well as other drummers as "far away as Germany.”

The Beat Boogie drummers list continues to grow including a number of well-known names who perform with Prince, Kansas, Styx and the Buddy Rich Big Band.

Crabtree knew the founding drummer of Styx, the late John Pannozo, back in 1973 when he was still working a second job at Just Music on Halsted Street in Chicago.

“I bought a big set of Premier Drums, Keith Moon style, from him,” Crabtree says. “After 1978 I lost touch with him and they went on to be a world-wide success.”

Percussion is the heart and soul of any song, Crabtree believes. Whether it's a pulse-pounding heavy metal track or cool and classic rock and roll, the drums are there, setting the pace for the entire band and injecting energy into the sound. With such a vital role to play in the performance, the right acoustic drum kit is one of the most important investments a drummer can make. Beat Boogie Quality Drums’ custom snares come in a variety of colors, wraps and wood and metal shells.

Crabtree is proud to play a small part in an industry he loves.

“The people you meet, the things you learn from drummers, the various drum manufacturers and master-drum builders throughout the world,” Crabtree says. “It’s truly a small, tight-knit world that I’m grateful to be part of.”

Crabtree will have a booth at the Chicago Drum Show in May, the world's biggest and longest running show of its kind.

The Beat Boogie Quality Drums Schererville showroom is accessed by appointment only. There is a link on the website for contacting Crabtree or he can be reached by e-mail at BeatBoogie@BeatBoogie.com.

A drum kit at Beat Boogie Drums displayed in the Schererville store showroom.

Steve Crabtree plays one of the breath-controlled snare drums he invented.