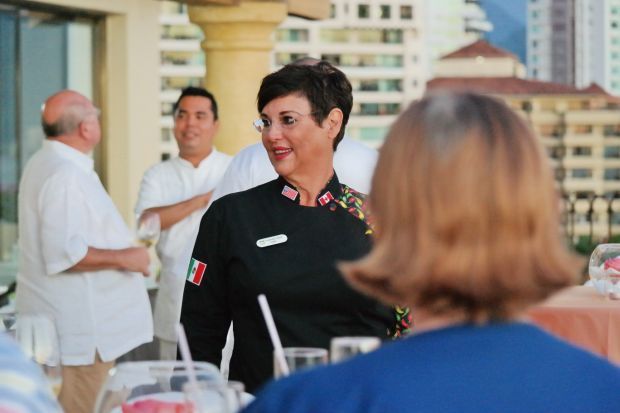 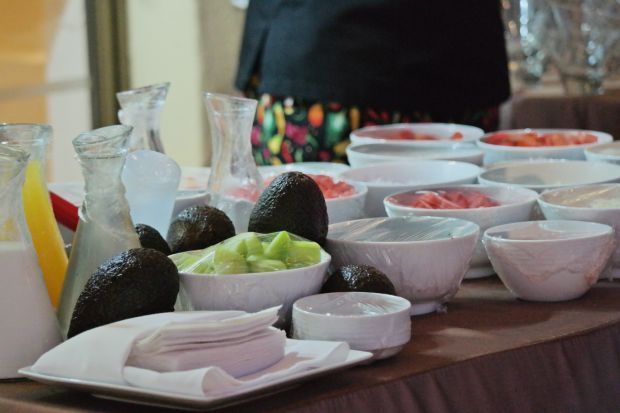 The sun is setting over Banderas Bay in Puerto Vallarta, turning the rooftop at the magnificent Velas Vallarta Resort into bands of sherbet colors as we sit holding Margaritas in one hand and notebooks in the other while watching Yolanda Yanar as she begins a cooking demonstration. Yanar, a Mexican TV personality who studied at the American Culinary Institute in Napa Valley California as well in Barcelona and at Le Cordon Bleu Paris, says her upbringing near El Paso and Ciudad Juárez taught her the duality of foods from two different cultures. She’s one of those people who make even intricate cooking look easy.

We’ve come to Puerto Vallarta for the 20th Anniversary of International Gourmet Festival where guest chefs from around the world partner up with Puerto Vallarta’s restaurateurs and chefs, to showcase sophisticated and wondrous haute cuisine. But Yanar, who teaches weekly cooking demonstrations as Velas Vallarta, shows us how to keep it simple.

“I’m like everyone else, when I get home I want something good to eat that can be made quickly, “she says as she peels and then mashes ripened and lush avocado.

“Avocados are the mother of all fruits,” Yanar tells us as we scribble down every word she is saying. “We don’t want it too smooth.”

But Yanar isn’t just making the classic guacamole dish with onions, tomatoes, cilantro and lemon juice. As delicious as that is, she wants to show us how guacamole recipes can be tweaked to showcase different culinary influences.

“Now we’ve going to show you ways to use other ingredients as well, says Yanar as we use pork strips and tortilla chips to scoop up the first round of guacamole. “I like to use red onions instead of yellow as they’re not as harsh and they look so pretty. I also like to add small strips of peppers.”

For her next version, she takes tiny squares of panella cheese and folds them gently into the guacamole, along with a touch of olive oil and then sprinkles the mixture with finely chopped cilantro. The light, fresh cheese offers a counterpoint to the rich heaviness of guacamole.

“We also could add cranberries as well or dried figs to guacamole,” Yanar tells us.

But we’re not stopping there. Because so much of Yanar’s cookery has been based on melding food cultures, she now adds an Asian twist by adding chopped peanuts, pecans, sesame oil and soy sauce to her original recipe. Asian-style guacamole? Who would have guessed? But it is delicious, we all agree, and take seconds and even thirds when the bowl and chips come around again.

For those who sometimes have difficulty finding ripened avocados at the supermarket, Yana recommends wrapping hard avocados in newspapers and putting them in an unheated—and not to be heated during this process.

The avocados will be ready to use the next day,” says Yanar. “Just be sure not to turn the oven on.”

1 jalapeno pepper, minced (to make it less hot, remove the seeds before mincing)

Salt and pepper to taste

½ cup nuts such as peanuts or pecans, chopped

Tortilla chips (to be used for dipping into the guacamole)

Pork skins (to be used for dipping into the guacamole)

Create your own guacamole by choosing which ingredients you want to add.