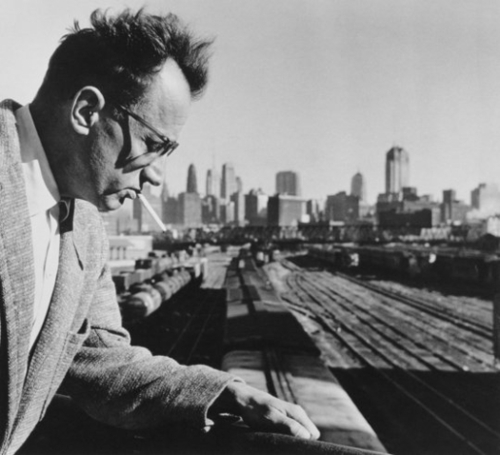 Writer Nelson Algren and his 1951 published essay "City on the Make" offer over his view of Chicago. 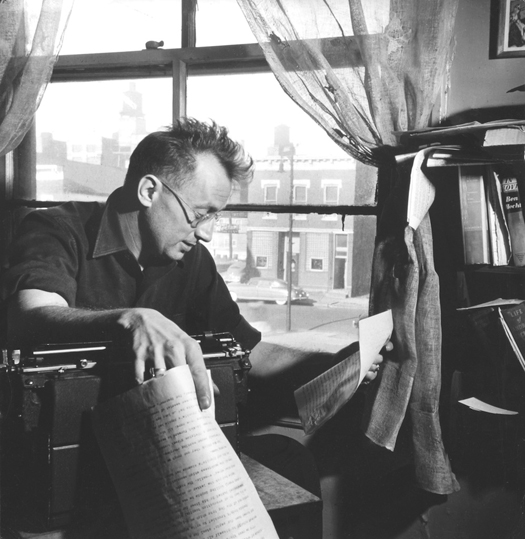 Denise DeClue is both excited and moved by news that some performances are already sold out for this month's relaunch of her partnership play with Columbia College Theatre Department's staging of "City on the Make."

The quick run Oct. 24 to Nov. 3 on campus at the Classic Studio Theatre 72 E. 11th St. in Chicago, showcases selected stories adapted from the works of Nelson Algren from his 1951 published essay.

"It's a great feeling to have this kind of interest generated by a work that began so long ago," said DeClue, who lives in Beverly Shores and whose other writing credits include the 1986 film "About Last Night," written with her Second City pal Tim Kazurinsky.

"Columbia College has taken this stage project to a whole new level."

DeClue wrote the stage work with Jeffrey Berkson and the late John Karraker, when it was first performed at Northlight Theatre in Evanston in 1984 starring Northwestern alum, turned star of NBC's "Will and Grace," Megan Mullally opposite actor Kevin Dunn.

This season's new incarnation of the work is directed by Sheldon Patinkin with musical direction by Andra Velis Simon.

"While working with Jeff to bring this to Columbia College, we went through so many boxes of the originally materials we kept from the Northlight run, which back then, is what led to it also going to an off-Broadway production in New York after Chicago," DeClue said.

"Having the music department at Columbia College to work with for creating a new score is what has made the process this time around even more amazing."

She describes "City on the Make" as an adaptation of Algren's lyrical essay of the same name with tales of two-bit hustlers, gangsters and corrupt politicians, all painted with scenes and words rich with imagery and passion.

Today, Algren's writings of the Windy City remain considered by scholars as the definitive prose portrait of the city of Chicago.

DeClue says the stage adaptation introduces audiences to "the city's heart, located in the 'nobodies nobody knows.' "

"We set the first act in a police station line-up and the second act is based in bar, because these are the places where people's stories are shared with one another," she said.

Some of the favorite selected prose of Algren highlighted in the production include "How the Devil Came Down Division Street," "Is Your Name Joe?" and "A Bottle of Milk for Mother."

Director Patinkin, Columbia's Theatre Department chair emeritus, has a stage resume that reads like a history of Chicago theatre since the mid-1950s, having directed hundreds of productions for spaces ranging from Steppenwolf and Northlight to his artistic consultant work for The Second City. He was Columbia College Theatre Department Chair from 1980-2009.

According to the University of Chicago Press, which issued a new edition of the essay for the 50th anniversary in 2001, "City on the Make" remains "one of Chicago's most popular local books."

As described for the book's anniversary re-release, the publisher described Algren written account of the Windy City as: "A 12,000-word lyrical essay summarizing 120 years of Chicago history as a tangle of hustlers, gangsters, and corrupt politicians, ultimately declaring his love for the city with these famous lines: 'Once you've become a part of this particular patch, you'll never love another. Like loving a woman with a broken nose, you may well find lovelier lovelies, but never a lovely so real.' "

The essay also includes Algren's account of the 1919 Black Sox scandal, when eight Chicago White Sox players were accused of accepting bribes to throw the world series, with Algren adding "the whole city has always been a rigged ballgame."

"City on the Make" adapted from the works of Nelson Algren and written by Jeffrey Berkson, John Karraker and Denise DeClue in the Classic Studio Theatre of Columbia College, 72 E. 11th Street Chicago

HOW MUCH: $10 General Admission, $5 Senior citizens

Writer Nelson Algren and his 1951 published essay "City on the Make" offer over his view of Chicago.