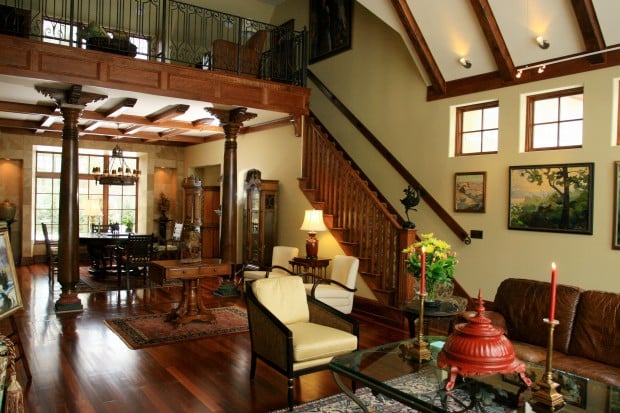 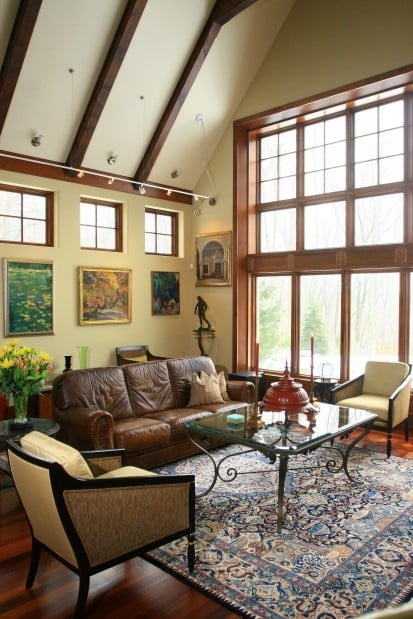 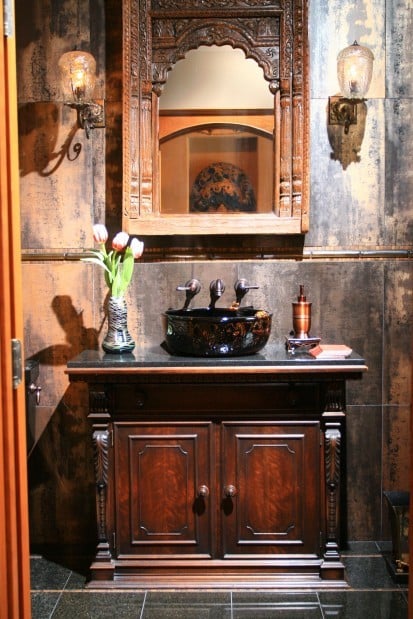 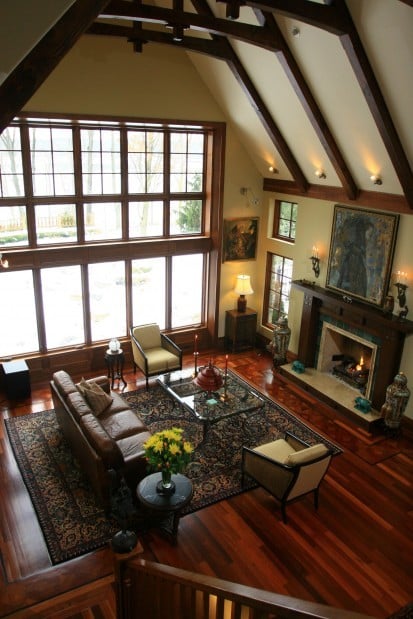 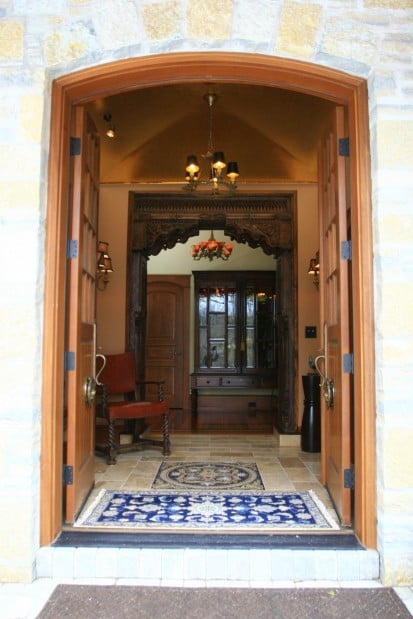 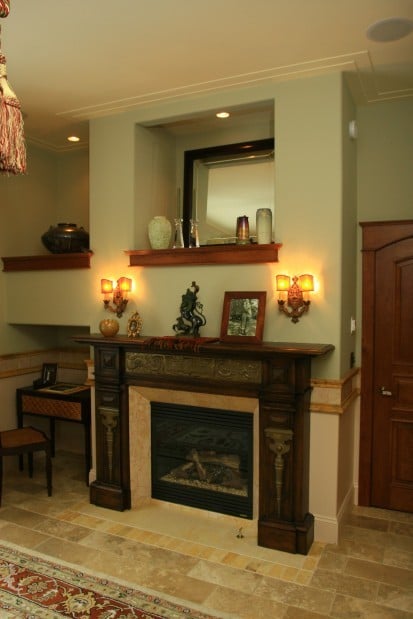 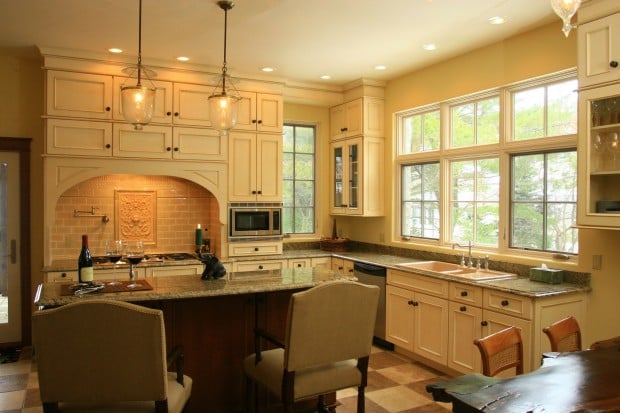 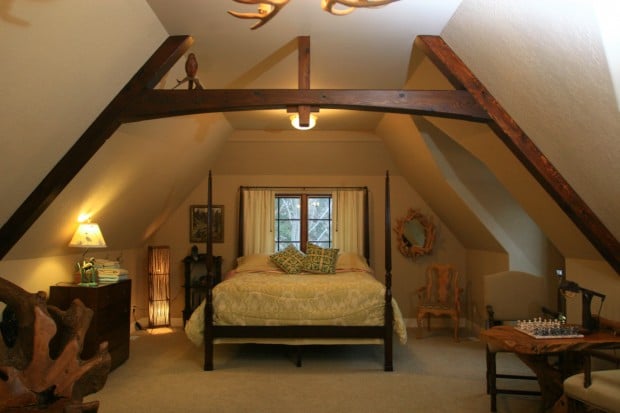 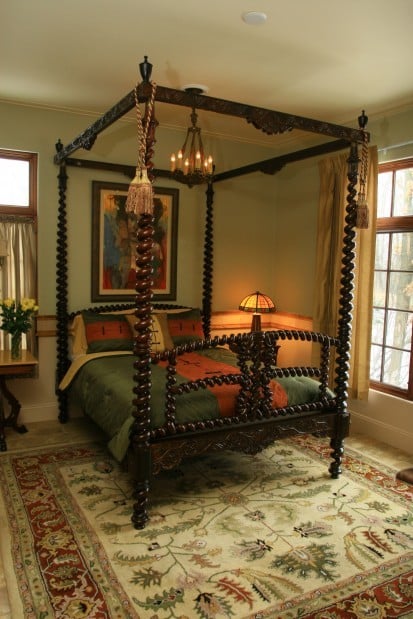 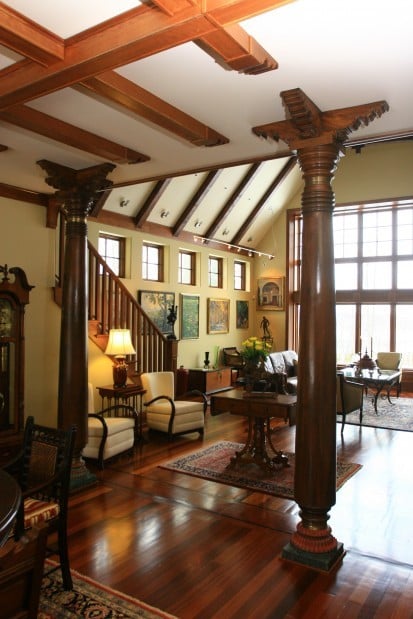 Many intriguing artifacts decorate the life paths of Dick Waskin and Larry Hanlin.

The two have lived in, renovated and built several homes in Michigan. For a decade, they owned a furnishings import shop. In addition, their careers include police work, human resources, general contracting and real estate.

They also discovered and bought some 30 acres of land about five or six blocks from downtown Saugatuck and Douglas on the Kalamazoo River. Here, they created a 17-lot development called Heron Bay, where they now live in an English-style home that brims with all things British-Colonial.

How's that for lives that are as varied and ever-changing as the river on which they live?

The men's home reflects their passion for Asian craftsmanship and English architecture. "We wanted the design of the home to be traditional English on the exterior, and British-Colonial on the interior," says Waskin, a Realtor who owns RE/MAX Saugatuck-Douglas.

A British-Colonial look typically features the influences of British colonists who in history marched around the globe and blended the rich dark woods of exotic faraway places with their traditional British finery. Dark furniture and flooring were signatures of the style.

Down by the River

These homeowners are just as savvy about what's outside, as what's inside. The Kalamazoo River views are awesome, say the two men. The river, which is the harbor for the city of Douglas, empties into Lake Michigan beyond the Blue Star Bridge. "We can boat out to Lake Michigan or up the river. It's a wonderful natural wetland here," Hanlin explains.

The gardens and a backyard koi pond are Waskin's pride and joy. With two waterfalls and fish caves (for hiding from herons), "It's the koi pond of all koi ponds," Waskin says with a laugh.

Hanlin, a retired Detroit police officer and former HR director for the Private Industry Council of Berrien-Van Buren County, was the general contractor for their Heron Bay home's construction. A man of many talents, he has been involved in building and home design for several years. "When we lived in Detroit, we would buy homes, renovate them and sell or rent them," Hanlin explains.

One of their favorite life chapters involves meeting an eye surgeon who lived in one of the Heron Bay homes and had an eye for Indian adornments. One day he arrived at the Hanlin/Waskin residence with a big British-Colonial-style chair.

"It was a plantation chair," Hanlin recalls. Over a "nice bottle of port," the men talked about their desire to open a gallery/store with these types of furnishings. And voila, they became business partners and opened an import store called the Elephant's Trunk in Douglas. "Our friend was our inspiration to import British-Colonial furniture—he provided us with the necessary contacts to begin our importing business," Waskin explains.

For 10 years, they imported unusual architectural items and furnishings, mostly from Southeast Asia. The store is no longer in business, but their home reflects an exotic and worldly sensibility through and through, with items and embellishments from Burma, Thailand, Hong Kong and beyond.

Every design feature has a story behind it. For example, if you look straight up as you approach the home's front doors (beneath a cathedral roof over the porch), you'll see hand-glazed tiles made in Thailand and a bronze stag head that they bought at LaBarge Furniture & Accessory Co., which was formerly located in Holland, Michigan.

"It's a very English look," Hanlin says. That tile also was used for a fireplace surround. In the kitchen, a three-piece tile installation of a lion's head, made by a ceramic artist in Texas, reigns supreme. Then there's the charming powder room sink. "A potter in Thailand impressed a pattern on the sink, and then sculpted frogs for it."

Visitors sometimes even feel a bit like Harry Potter as they take in Potter-esque lighting and magnificent stone and woodwork. "We drew a lot of our inspiration from when we went to England and saw where some of the Potter movie scenes were filmed," Waskin says.

The home's exterior stone is from a quarry in Michigan's Upper Peninsula near Escanaba and was ordered through Halquist Stone in Wisconsin. The two also worked with Wisconsin-based Port City Studio Architects. "Port City was great," Hanlin says. "They even photographed all of our unique furniture so that they could design places for it," he adds. "We wanted our home to look and feel like it's been here for at least 50 years, and we've achieved that."

Another home-design chapter finished. What's next? The men say they may take on a new project soon and create a whole different look. "Stay tuned," Waskin says with a laugh.