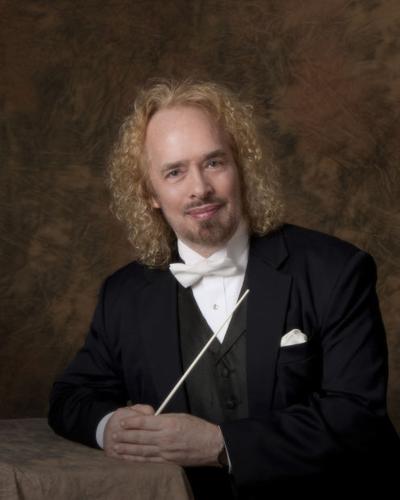 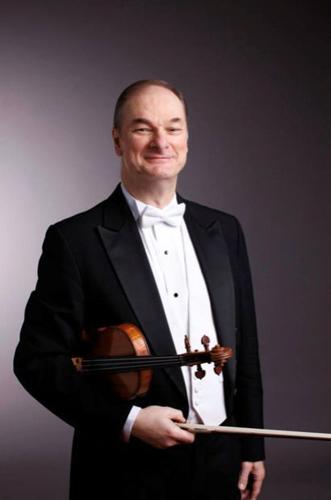 As you know, our past two classical concerts were sold out, and I am expecting our concert Friday will be, too. Please be sure to order your tickets today, OK?

One reason the concert will be sold out is that our guest artist is David Taylor, assistant concertmaster of the Chicago Symphony Orchestra. I have known David for a very long time. His sister and I had the same teacher in Philadelphia while we were working on our master's degrees in piano. For over 10 years now, David and I have trying to find a week when David could get off from the Chicago symphony, our hall was available, and we could plan a concert.

Finally last season we worked it out.

I have been studying this piece for weeks now, and there is something remarkable that I want to share with you. I find myself smiling the entire time that I am studying the score and hearing the music in my head. Sometimes, my face even hurts after I have sat and studied it for an hour or so.

The second piece that David will perform is Vaughn Williams’ "The Lark Ascending." A few years ago, in Great Britain, they took a poll asking the nation which one piece they would like to hear if left alone on deserted island.

They chose "The Lark Ascending." It is a soaring, thought-provoking, dolce piece that in all its floating gentleness belies the fact that it can only be performed by a super virtuoso. Also, we are going to have a camera on David’s violin during this piece and show him on the big screens at Bethel. It’s our new violin-cam.

The final piece that David will play is the opening movie music to "Fiddler on the Roof." Originally scored by John Williams and played by Isaac Stern for the movie in 1971, it has lain dormant on a shelf at MGM for over 40 years.

When David would work with John Williams at the Chicago Symphony, he would "bug" Mr. Williams to please publish this opening violin music. Each year, they had a running joke: David would ask John Williams if he had rearranged the music and published it, and John would reply, “Not yet!"

Then a few years ago at Ravinia, David was sitting in the concertmaster chair, John Williams was conducting and he came up and said, “David, come to my dressing room after rehearsal, I have something for you."

And ... there was the finished score and parts to the violin arrangement to "Fiddler on the Roof!" We are playing from the actual parts that John Williams gave to David.

This concert is going to be great fun! Oh! Did I mention that we are playing the boisterous, wild Scottish symphony of Mendelssohn on the second half? (No kilts though ...) and, by the way, there MIGHT just be an encore!

I hope that you will purchase your tickets before they are all sold out and that David and I will have a chance to greet you all after the performance!

Opinions are solely those of the writer's. Kirk Muspratt is the conductor of the Northwest Indiana Symphony Orchestra. Muspratt's column is an occasional feature during symphony season.

The Northwest Indiana Symphony Orchestra presents "Spirited Violin," at 7:30 p.m. Friday at the auditorium at Bethel Church, 10202 Broadway in Crown Point. The concert will feature Chicago Symphony Orchestra assistant concertmaster David Taylor. There will be a free pre-concert discussion for all ticket holders with Maestro Kirk Muspratt beginning at 6:15 p.m. Tickets are $25 to $65; students' tickets are $10. This concert is sponsored by Crown Point Community Foundation, the Dr. Henry Giragos Family, Joanne and Rick Svetanoff and anonymous donors.