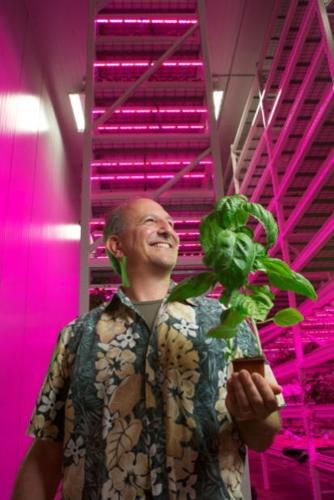 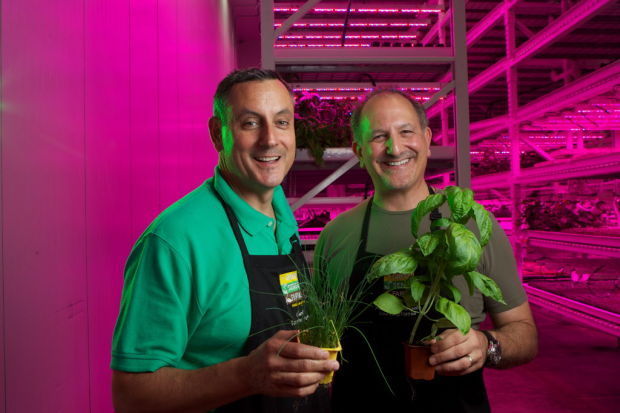 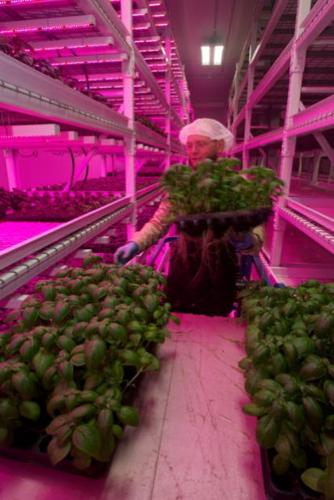 Lane Patterson "harvests" flats of basil two stories in the air on a scissor lift at Green Sense Farms in Portage.

The thermometer said -40 Fahrenheit. Schools were canceled. Cars refused to start. Yet this cold February morning in 2014 marked the first harvest of leafy greens and aromatic herbs at Green Sense Farms… in Portage. Located in the Ameriplex business park, Green Sense Farms is the nation’s largest indoor vertical farm.

“We’ve created Groundhog Day in here,” says Robert Colangelo, president of Green Sense Farms. “By growing indoors, we’re able to take the weather out of the equation. Instead of searching for a plant that can adapt to the environment, it’s now possible to adapt the indoor environment to the plant,” he says. Inside a plain gray industrial building, thousands of happy plants grow in towers 25-feet high, bathed in soft LED lights. Picture endless fields of crisp kale and peppery arugula, fragrant herbs, and micro greens – all fit for the finest kitchens – all non-GMO, and grown without herbicides or pesticides.

This ambitious urban farm began with an idea. Scientist, author and environmental entrepreneur Robert Colangelo and Businessman Carl Wenz saw an opportunity to create a sustainable year-round farm that would use a small footprint to feed a large area. With his financial background, Wenz got busy shaping a business model. “We realized that to be successful, the farm had to be big,” says Wenz, chief financial officer of Green Sense Farms. There were many details to work out, such as where and what to grow, and how best to create photosynthesis indoors.

Originally from Barrington, Founding Farmers Colangelo and Wenz chose Portage, because of its central location near highway hubs, making it possible to serve a five-state area. It didn’t hurt that Whole Foods Markets had its Midwest Distribution Center in nearby Munster, reaching 48 stores in eight states. The future farmers had to look further to find the ideal plant manager. They found him in Lane Patterson. Yet there was an obstacle: Patterson was in the South Pole where he had spent nine seasons operating an indoor growth chamber. His job was to grow food in a land that sees absolutely no sunlight for half the year.

“My purpose was to provide a bright, warm, aromatic, green environment for the station and crew isolated in Antarctica over the austral winter,” says Patterson who was accused of bringing the cold with him when he arrived in Indiana last winter. Accustomed to conditions of -50 to -80 degrees Fahrenheit, Patterson was delighted by the temps of just -20 in Northwest Indiana. “My van had difficulty handling the cold, but I sure didn’t,” he grins. He immediately set to work planting seeds.

Green Sense farmers had to learn the special needs of each plant. “We started out giving everyone the same portions and then watched to see who was crying. We learned that every single plant has its own nuances,” says Patterson. “Now we know to irrigate the basil on a different cycle than the lettuce, and so on. Once we found the solutions…boom!” says Patterson. These days they’re harvesting nearly every two weeks.

Green Sense farmers even play music for the plants. Patterson prefers classical, but rock often rules when the staff of six weighs in. “The plants could care less about the music choices, but they love it if you sing to them,” he surmises. “The difference is obvious. When you sing, you’re breathing. You’re providing the carbon dioxide the plants use to grow.”

Upsides for the Environment

Green Sense Farms is also the nation’s largest user of Philips LED lights, custom-designed for the plants. Before you cringe at the thought of the energy bill, Patterson explains the efficiencies. “We’re only providing enough light necessary for photosynthesis. That’s not white light, but red and blue light. This allows us to grow far cheaper, because we’re not bathing the plants in light they don’t need.” The red and blue combination results in a whimsical purple hue. Removed from the light, each plant is perfectly green, fragrant, nutritious and delicious.

“Our mantra really is ‘reduce, reuse, recycle,” says Colangelo. “We produce very little waste as we recycle our water, our nutrients, even the coconut coir we use instead of soil. Plus we create minimal greenhouse gases, because the plants are grown near where they’re consumed.” Add that to the fact that they grow on a footprint that’s one-tenth the size of a traditional farm and you have a winning solution to the world’s growing needs.

Retailers and restaurateurs are taking notice. Already Whole Foods Markets has become the largest customer. Strack & Van Til features Green Sense Farms produce in its Family Farms initiative. “For us, working with Green Sense means we can create year-round dishes using ingredients that were formerly available only by shipping them in from across the country or internationally,” adds Diana Twyman, co-owner of Miller Bakery Café in Gary.

“We’re at the beginning of the beginning for indoor farming,” predicts Colangelo. The United Nations (UN) predicts the world’s population will grow by some 2.5 billion people by 2050, and 80 percent of the world’s population will live in cities. At the same time, 80 percent of the land suitable for growing food is already in use. “This farm represents doing more with less and doing it closer to where it’s needed,” says Patterson.

Green Sense Farms continues its growing plans, setting its sites on new applications. “We’re working with the military to see about creating farms near bases. We’re also talking with hospitals about applications for their needs. There are so many possibilities to grow near where people live,” Wenz says.

In the meantime, Green Sense Farms continues to take root in Portage. On Tuesdays, every employee works side by side on the packing line. “It builds camaraderie and the staff likes it,” says Wenz. “There’s no other place like this. People pay for aromatherapy. Here, it’s free,” laughs Colangelo.

Lane Patterson "harvests" flats of basil two stories in the air on a scissor lift at Green Sense Farms in Portage.