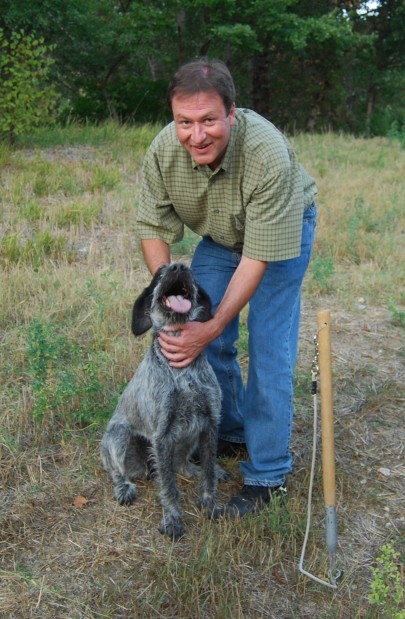 Rick Kaempfer bonds with the most famous truffle hunting dog in the entire region, Chicca. 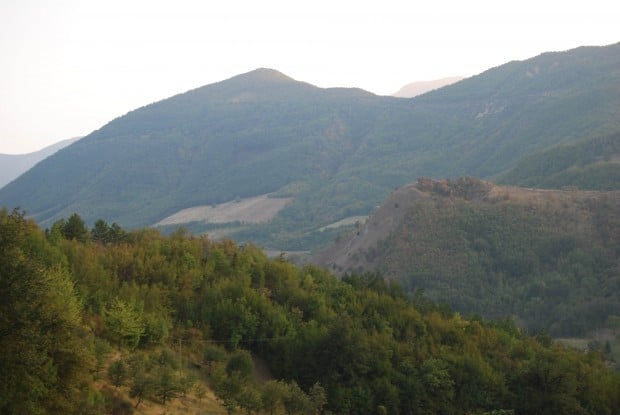 Truffles aren't grown. They are found. So when our hosts from the Italian Tourism Bureau promised us a truffle hunt, the entire group was excited about the adventure. We were only briefed that we'd need to wear the proper footwear—preferably boots we didn't mind getting muddy--and that we'd be traveling to the village of Acqualagna.

A quick look at the map let us know that the ride might be a bumpy one, and it certainly was. Acqualagna is seemingly in the middle of nowhere, but the journey from our hotel on the Adriatic Coast of Italy's Marche region to our destination was an incredibly picturesque ride through the spectacular Furlo River Gorge, and the rolling hills of Italy.

When we arrived in the village, it was obvious we were in a place that was famous for its truffles. References to truffles could be seen everywhere. Acqualagna hosts three different truffle festivals each year: the Regional Superior Black Truffle Fair the second-to-last weekend in February, the Regional Summer Black Truffle Fair in August, and the most famous of the truffle festivals, the national White Truffle Fair in October and November.

During those seasons, it is also possible to take a truffle hunting tour, like the one all of us were so excited to begin. The Gilligan-esque "three-hour tour" was only $35 an hour; a very reasonable price for truffle fans to watch the masters in action.

We pulled into the compound of our truffle hunter, Giorgio Remedio, who also doubled as the town's Chief of Police, and immediately heard the dogs barking. Giorgio had dozens of them, all in various stages of truffle hunting training.

He filled us in on the training technique as his assistant fetched his prize truffle dog. "The dogs have very developed senses of smell," he told us through the interpreter, "but they also have a very good sense of taste." He was smiling as he spoke. "They know good truffles when they smell them, so the trick is to make sure they don't eat them, too. With the finest white truffles going for $3,000 a kilo, that's like eating money!"

He showed us how he buried little film canisters filled with truffles for the dogs to find before letting them graduate to actual truffle-hunting. After he demonstrated the technique, we met the star of today's truffle hunt, the most famous truffle hunting dog in the entire region, Chicca. Her travels have taken her around the world, including a visit to the White House at the tail end of the Clinton Administration.

"How much is Chicca worth?" one of the members of our tour asked.

"She is not for sale!" Giorgio replied.

"Not for sale," Giorgio said once again. He looked like he had been asked to part with one of his children.

Giorgio released Chicca from her leash, and we all followed.

Our amazing truffle hunting dog stopped abruptly at the base of a small oak tree and started digging. Giorgio saddled up beside her and crouched on a knee. "Aha, see here, she has found one."

After he wiped the dirt off, he held it up for all to see. It still looked like a black clump of mud in his hand, but when he passed it around, we could immediately smell the fine musky aroma of the black truffle.

For the next thirty minutes or so we followed Chicca around as she dug for gold. We began to figure out where to look, so we started hunting for them, too.

"I found one!" one of the ladies in our party said.

Giorgio looked at the clump she had in her hand. "Ah," he said with a twinkle in his eye. "That is a brown truffle."

"A brown truffle?" she asked.

"Yes, probably the droppings of a porcupine or a wild boar."

She dropped it immediately.

Perhaps it was best to leave the truffle hunting to the professionals.

Rick Kaempfer bonds with the most famous truffle hunting dog in the entire region, Chicca.