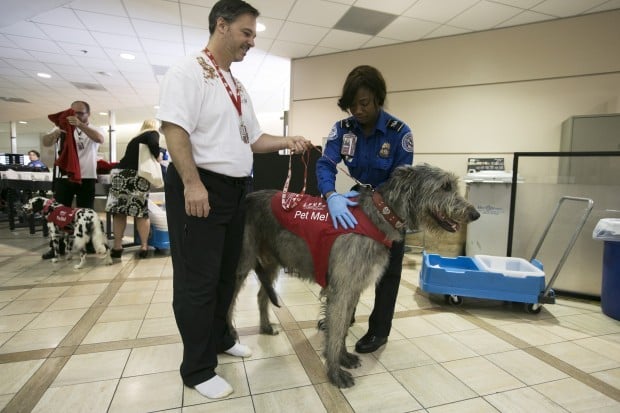 Volunteer Brian Valente, left, and his dog, Finn, with Pets Unstressing Passengers (PUPs) are search as they go through security check point at the Los Angeles International Airport terminal. The Los Angeles International Airport has 30 therapy dogs and is hoping to expand its program. The dogs are intended to take the stress out of travel: the crowds, long lines and terrorism concerns. 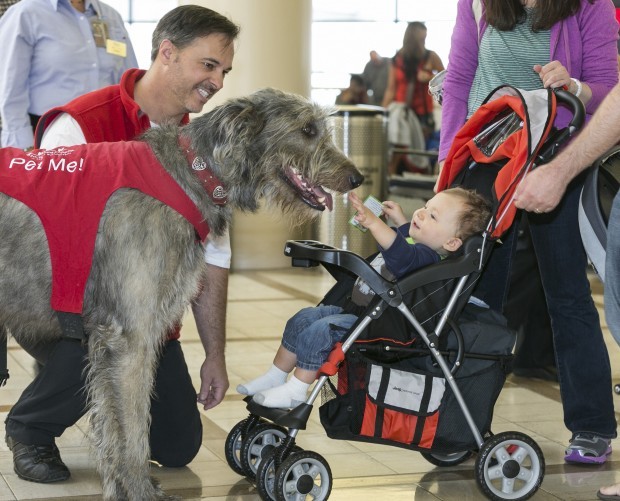 LOS ANGELES (AP) — There's a new breed of airport dog. They aren't looking for drugs or bombs — they are looking for people who need a buddy, a belly to rub or a paw to shake.

"His job is to be touched," volunteer Kyra Hubis said about Henry James, her 5-year-old golden retriever that works a few hours a week at the San Jose airport. "I am just standing there with him. They are talking to him. If I need to answer for him, I do. But I am at the end of his leash, he's not at the end of mine."

Mineta San Jose International Airport is widely credited with introducing the first airport therapy dog in the days after Sept. 11, 2001, when flights were grounded, passengers were stranded and reaching friends and relatives in the East was nearly impossible. Passengers were anxious and afraid.

The dogs are intended to take the stress out of travel — the crowds, long lines and terrorism concerns.

You never know why people are flying, said Heidi Huebner, director of volunteers at LAX, which launched Pets Unstressing Passengers (PUPs) in April. Travelers might be in town for a vacation, a funeral, to visit a sick family member or to attend a business meeting.

"You can literally feel the stress levels drop, people start smiling, strangers start talking to each other and everybody walks away feeling really, really good," Huebner said.

Dogs have to be healthy, skilled, stable, well-mannered and able to work on a slack 4-foot leash, said Billie Smith, executive director of Wyoming-based Therapy Dogs, Inc., which certifies the LAX animals. They have to be comfortable with crowds, sounds, smells — and they need to pass through security like all airport workers.

Handlers are taught to watch for people who fear or dislike dogs or those who might have allergies. In most cases, people approach the dogs, identifiable by the vests or bandannas they wear.

Los Angeles' dogs, which are featured on trading cards, are as varied as its airport passengers. There's a long-haired Dalmatian, a Lab-pointer mix, a field spaniel, a poodle, three Australian Labradoodles, a Doberman and a 150-pound Irish wolfhound named Finn who has two tricks.

"He looks you in the eye and lays down on the job," said owner Brian Valente. "When I'm around Finn, it makes me feel like things are OK. When Finn's around other people, they are OK. It's almost instant, even if just for a moment," Valente said.

Miami's sole dog, Casey, a 4-year-old golden retriever, is a star. She has her own website, fan mail, business cards and a role on "Airport 24/7: Miami," a weekly reality show on the Travel Channel.

"Casey is so pure and genuine," explained Dickie Davis, director of terminal operations and customer service. "She's not asking for anything or selling anything. She is just a love magnet."

When Claudia McCaskill's family recently flew home from vacation in Brazil she requested Casey meet the plane to greet her 5-year-old daughter, Carina, who is autistic. She knew Carina would be low on energy and patience and they still had a 2.5-hour drive home to St. Lucie.

Casey and handler Liz Miller were there with a gift basket and Carina fell in love with the dog.

"Thank you for visiting us at the airport so I would be happy," Carina said in a video the family made for Casey.

Now Carina wants to go back and see Casey again.

"I can't say how much we appreciate what they did for us. It not only helped our daughter, but us too," McCaskill said.

Despite all the smiles, there are also hard moments.

Before departing from San Jose, a soldier kneeled down and told Henry James: "OK, buddy, you take care of the house while I am gone," Hubis said.

A woman who said her husband of 40 years told her he wanted a divorce that morning wept on Henry's shoulder.

Volunteer Brian Valente, left, and his dog, Finn, with Pets Unstressing Passengers (PUPs) are search as they go through security check point at the Los Angeles International Airport terminal. The Los Angeles International Airport has 30 therapy dogs and is hoping to expand its program. The dogs are intended to take the stress out of travel: the crowds, long lines and terrorism concerns.