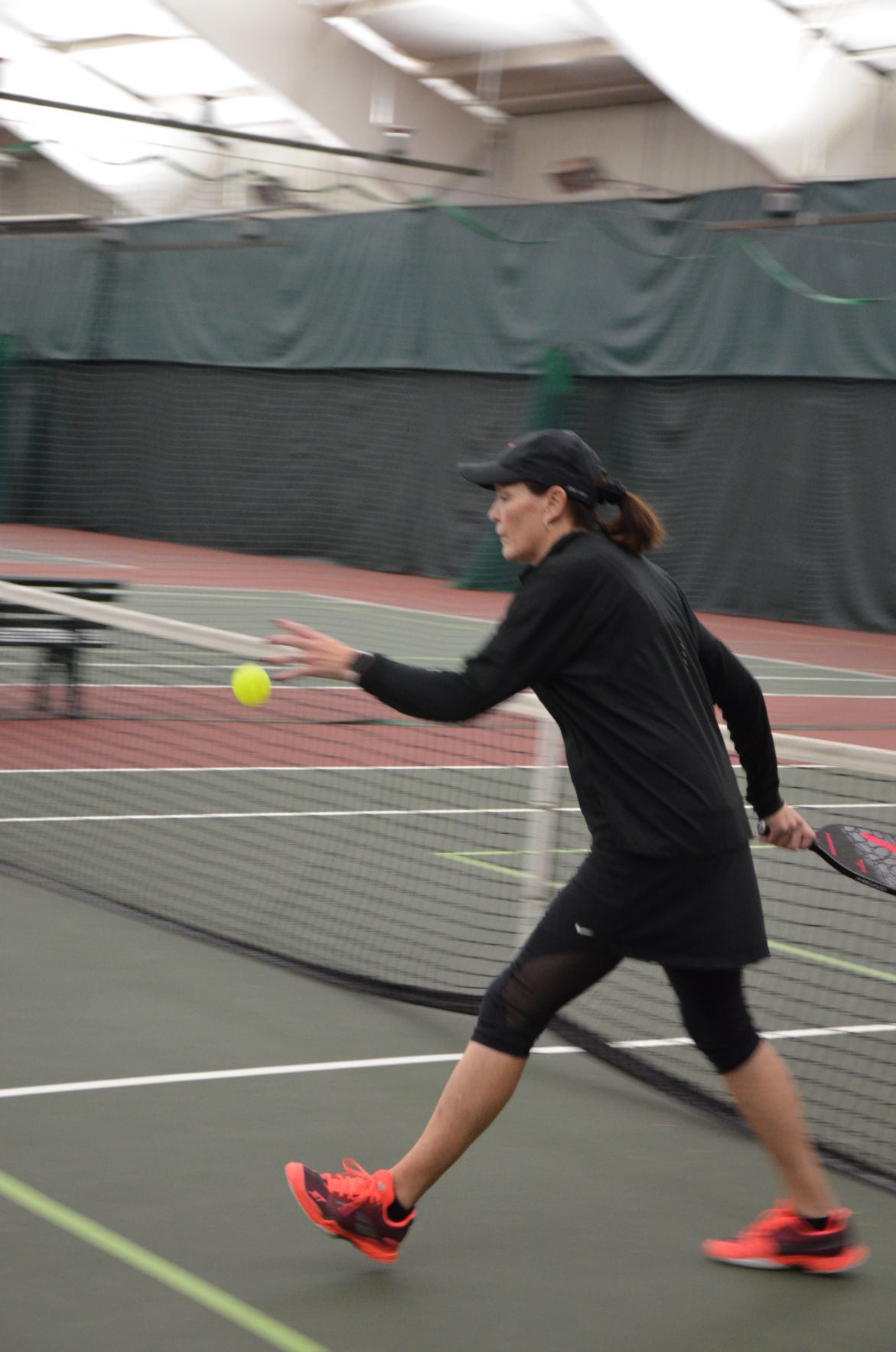 Nancy Bowman serves the ball during a pickleball match at Match Point in Griffith. 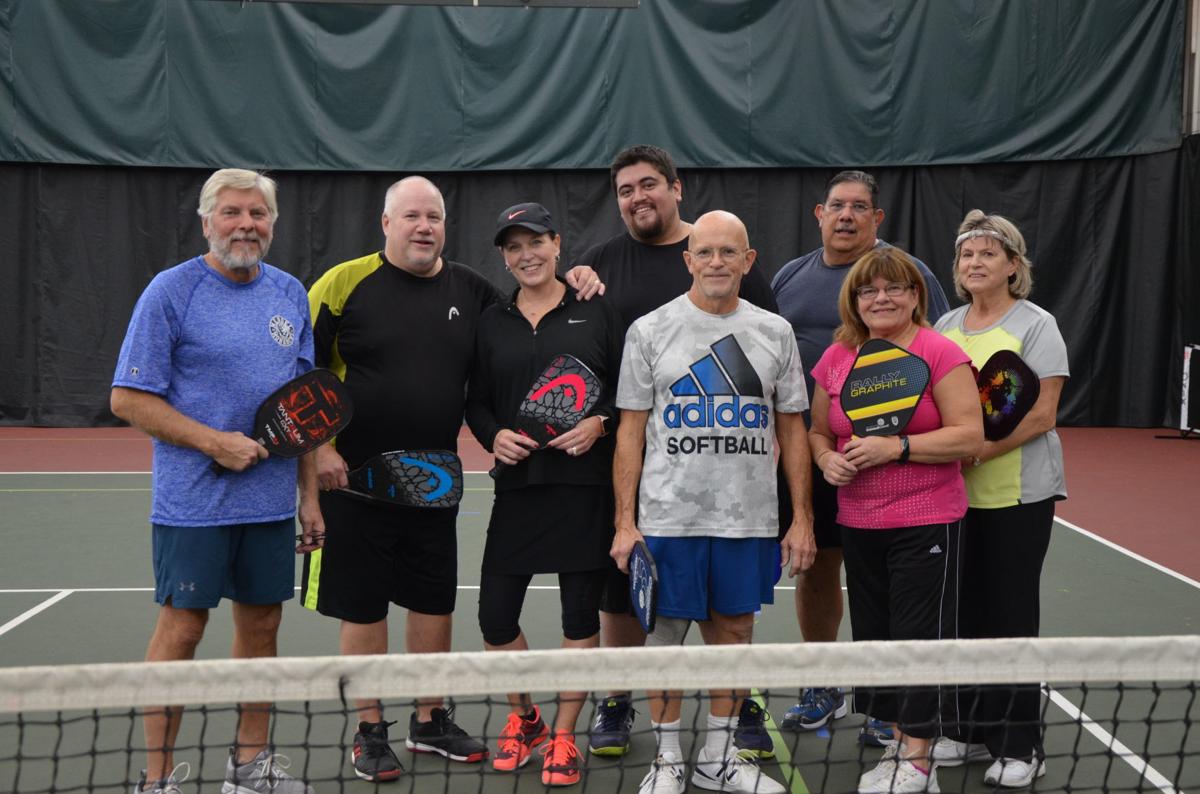 Players of all levels and ages are welcome to join the group of pickleball players at Match Point in Griffith. Players say it's a good family game because older players can make up in strategy what they may lack in strength and speed. 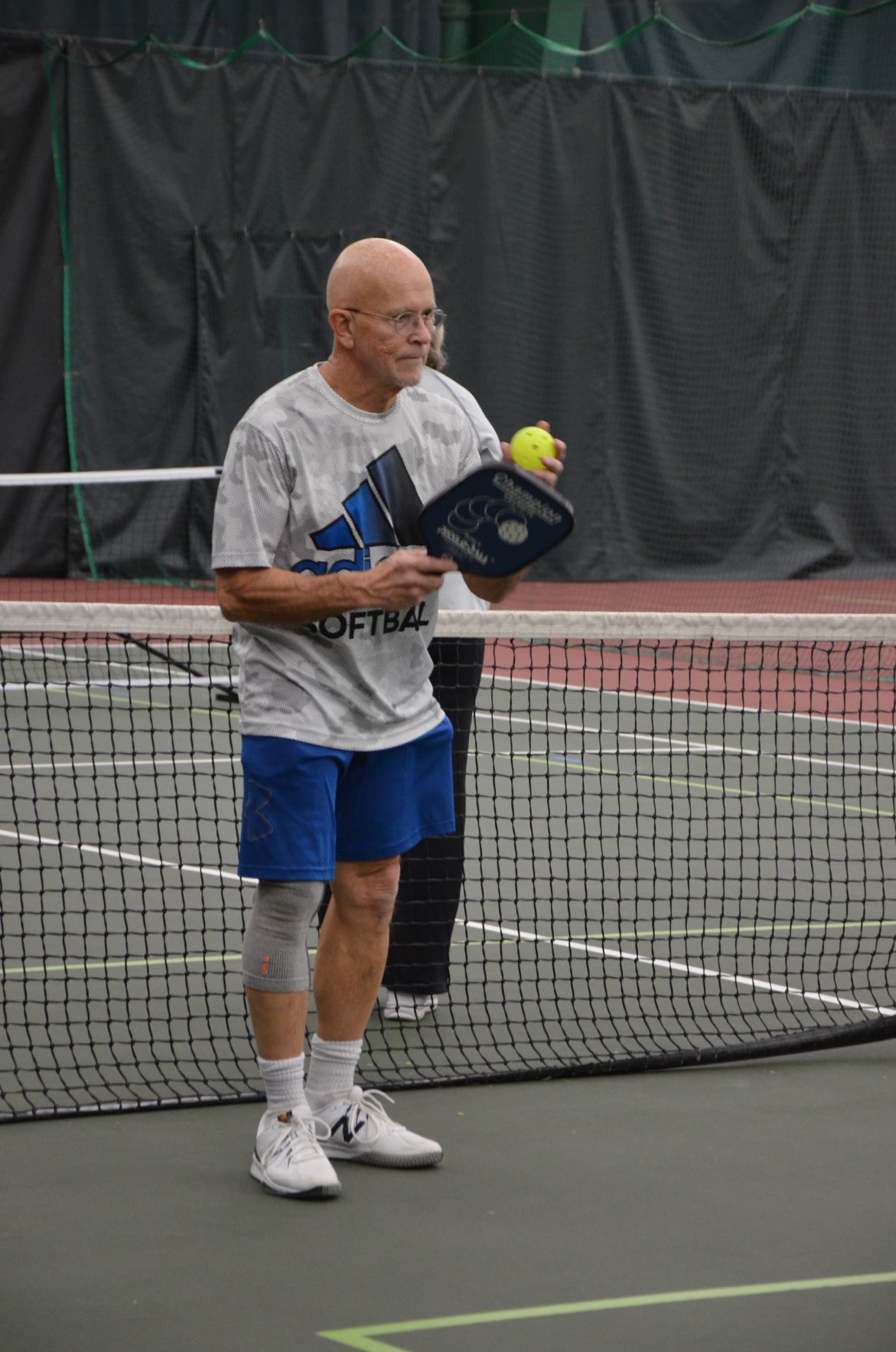 Gary Matthews, of Homewood, prepares to serve during a pickleball match.

Mixing elements of tennis, racquetball and ping pong, pickleball is a sport that has been gaining popularity in our area in recent years.

Invented in 1965, a trio of dads in Washington state came up with the game while trying to occupy their kids on a summer day when they weren’t able to visit the beach.

With ping pong paddles, wiffle balls and a badminton court, the game was born. It took a while, however, for pickleball to catch on in the Midwest.

You’ll find outdoor courts all over Florida where the annual U.S. Open Pickleball Championship is held. In Northwest Indiana, you’ll find a few outdoor courts, but there also now are several indoor courts, so you don’t have to put the game on hold when winter hits — and can get your kids to go with you this month for a fun family outing.

It is a game that draws a large number of older players, because it is known to be easier on the joints than tennis. However, it’s a fast-paced game that can be fun for any age, young, old or in-between.

It’s also a great activity for families to do together where parents may not be at a disadvantage over youngsters who may be more active and quick. It’s also very much a mental game, said Shannon Krzeminski, of Lansing.

“It can be mentally and physically challenging and a very demanding physical workout if you have competitive opponents who understand the strategy of the game,” said Krzeminski, who has played pickleball both indoors and outdoors throughout the Region. She also is a high school physical education teacher who has taught the game to teens, and her sons played the game in their junior high P.E. class.

Krzeminski’s son, Tyler, 12, has been playing the game since he was 8. “It really helps his reaction time and allows him to anticipate and predict where to put the ball,” she said.

Rich and Nancy Bowman, of St. John, were on a trip to Florida last year when they were introduced to the game of pickleball. They got hooked and when they returned to Northwest Indiana wanted to keep playing. They found a few places where it was available, but decided to bring pickleball to a new venue.

They purchased nets, paddles and balls for Match Point in Griffith and worked out open play times. The courts are open Tuesday, Wednesday and Thursday mornings from 8:30 to 11 a.m., and Friday and Sunday nights from 6 to 8 p.m. for $5 per person.

“We really want to help grow the sport in Northwest Indiana,” Nancy said.

For parents or grandparents who might not think it’s for them, retired physical therapist Gary Matthews, of Homewood, verified that it isn’t as hard on your body as other sports. He has been an avid player for the past five years and recommends it for all ages.

“It’s terrific exercise, and it’s a lot easier on your knees and all the joints than tennis,” he said. “It’s great for hand-eye coordination and it’s a very social game.”

The Courts of NWI

(Be sure to call ahead. Pickleball courts may have limited hours. Use of some courts may require membership or have higher cost for non-members.)

Where to play pickleball

The Courts of NWI

(Be sure to call ahead. Pickleball courts may have limited hours. Use of some courts may require membership or have higher cost for non-members.)

GRIFFITH — Len Sporman used to be an avid racquetball player, taught it for many years. But later in life, after his joints started breaking d…

Have a ball curing cabin fever: 10 indoor attractions in the Region to keep kids busy during winter break

What's this pickleball craze all about? Times reporter investigates

HIGHLAND — Pickleball is, apparently, expanding quicker than my waist line after a steak dinner.

Nancy Bowman serves the ball during a pickleball match at Match Point in Griffith.

Players of all levels and ages are welcome to join the group of pickleball players at Match Point in Griffith. Players say it's a good family game because older players can make up in strategy what they may lack in strength and speed.

Gary Matthews, of Homewood, prepares to serve during a pickleball match.