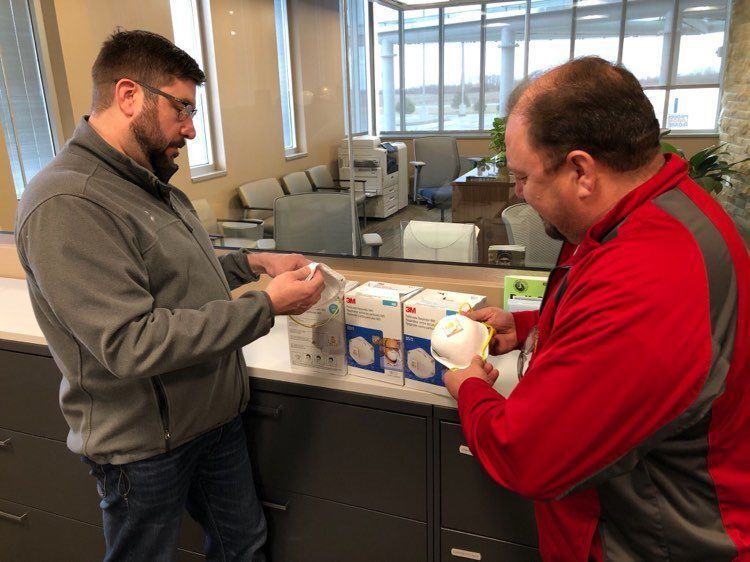 If there’s one thing I have learned in my years in Northwestern Indiana’s building trades it is that you should never expect things to go smoothly. Every project has its curve balls, so adapting to sudden surprises is one of the things we train for. But nothing compares to the hand we were dealt early this year when COVID-19 burst onto the scene.

Obviously, we were not alone. COVID-19 has impacted just about everyone and everything. Masks, hand sanitizer, and disinfecting wipes have all become as common (and in some cases as mandatory) as hard hats and safety vests on a construction site. The phrase “personal protective equipment“ or “PPE,” long familiar to construction workers, is now familiar to everyone.

In many ways, the Region’s building trades were fortunate. We had PPE at the ready. A lot of construction activity takes place outdoors and in situations where social distancing is not difficult. And thanks to years of strong bargaining and good relationships with our contractors, our members have the resources to help if they or a family member contract the disease.

Not all our union brothers and sisters have been so lucky. Those in the health care and food service industries have been on the front lines of the pandemic, and it has taken a heavy toll. The 300,000 hospitality and food service workers at places like hotels, casinos and sports stadiums reported in April that 98% of their membership was out of work.

In Minneapolis, Iron Workers Union Local 512 Business Manager Barry Davies told the local CBS station in August that construction in the city is “shot” for 2020 due to COVID-19 stopping big projects at the Minneapolis-St. Paul International Airport and the Mall of America.

Thanks to Indiana Gov. Eric Holcomb designating the trades as essential workers, our members have had the opportunity to keep working and doing our part to keep the local economy alive. For the most part, construction has been moving forward.

While work has slowed at the Region’s steel mills and refinery, most projects have not shut down outright. Public works initiatives have been advancing as scheduled and in the case of the Indiana Department of Transportation actually accelerated to take advantage of decreased traffic. The Hard Rock Casino and Data Center are also worth mentioning.

As we wait for activity to ramp back up, the trades have been helping out around the Region as best as we can. Earlier this year when first responders reported a shortage of PPE, we put out the call to our trade unions and contractors for any PPE they could spare. Support poured in and were passed along to help keep our police and firefighters safe while they fought to save lives.

We are also thinking about the future. Though no one expected a new virus to strike this year, many of the things that have come about in its wake are things that unions have fought for for years, and which have made the pandemic much easier for working families to bear thanks to the basic ability to organize and collectively bargain.

The COVID-19 pandemic has put a spotlight on the value of LOCAL businesses and working families to our economy and the knife-edge all too many exist on.

They need strong unions that can stand up for them to ensure that when those sudden unwelcome surprises appear, they will be ready to work and at the same time, able to take care of themselves and their families. We also need elected officials to continue to pass policies that ensure all projects are built by a trained local workforce.

Most importantly, we need to look out for each other. The last thing we need is an untrained workforce coming to NWI from a state with a high COVID-19 rate taking our jobs!

Randy Palmateer is business manager for the Northwestern Indiana Building & Construction Trades Council. The opinions are the writer's.

Richard Kyte: It's time to start talking to one another

Why are Americans so polarized right now? I’m not sure what the answer is, and I’m not sure it matters that much. What defines us is not so much our reasons as our attitudes.

SCOTT SHELLADY: Could some be chaos junkies?

I can’t help but think we are living through some of the most interesting times of our lives. However, I am not so self-centered that I think …

The Ethical Life podcast: Why we should care about ethics

Topics discussed include confirmation bias, the role social media plays in how we consume information and the important questions we need to ask each other to hopefully get at the truth.

GUEST COMMENTARY: Use Paris Climate Accord to compel China cleanup

There’s been plenty of debate about the Paris Climate Accord in recent years.

Take a moment to think about your favorite childhood memory and the sights and smells, the people who are with you and the way it makes you feel.

The academic achievement gap between Black and white students has proven resistant to most educational policy changes. Some say that education…

SCOTT SHELLADY: When will the fat lady sing?

Well, I guess it isn’t over until the fat lady sings – and it doesn’t even look like she has ordered her appetizer(s) yet. The election looks …

You present to a physician with severe abdominal pain. He examines you and concludes that your ingrown toenails are the cause of your abdomina…

It is finally here. By the time I write my next missive, there will have been some movement as to whom our next president will be. Obviously, …