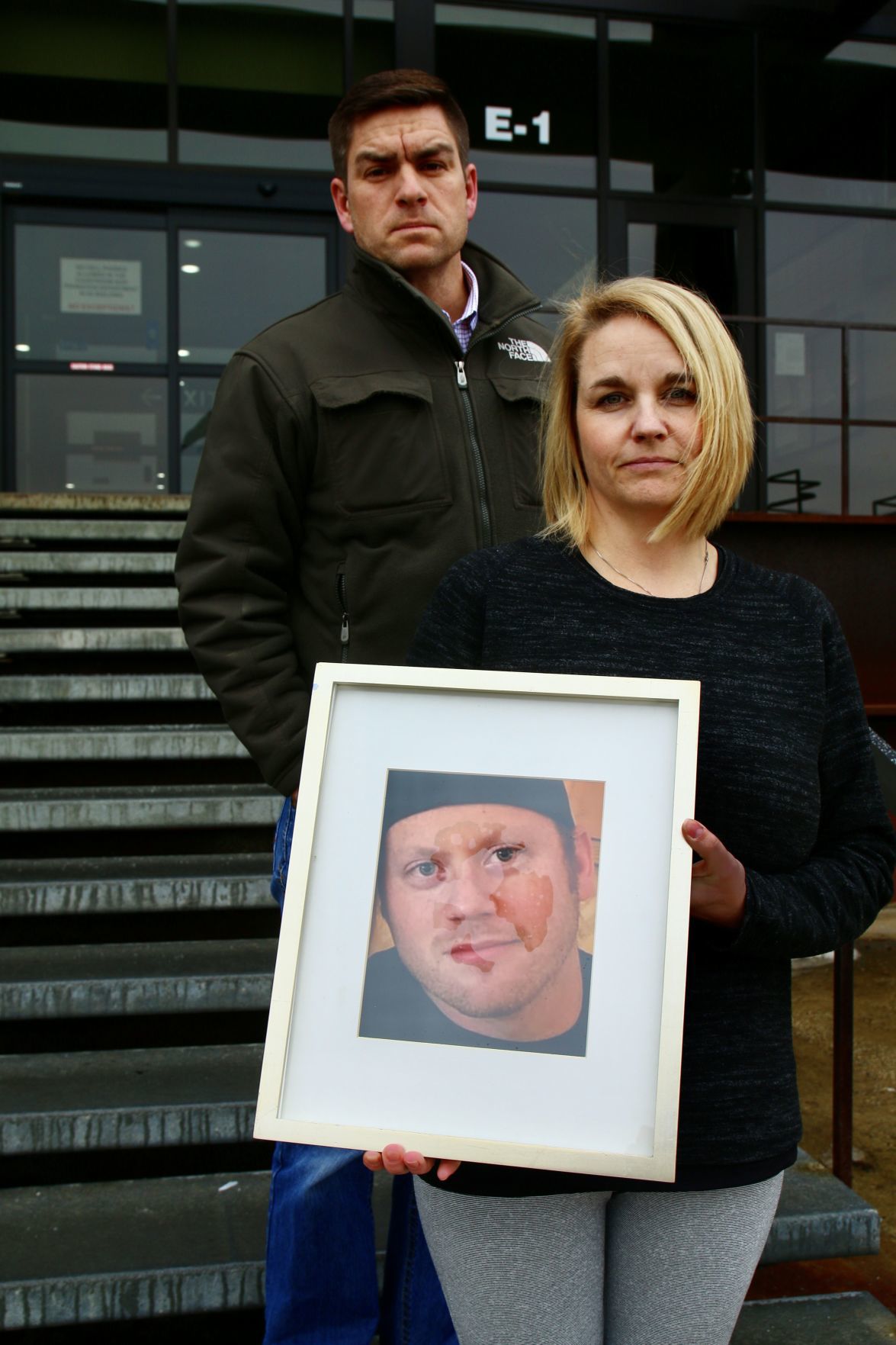 Brian DeVries, of Cedar Lake, and Keri DeVries, of Lowell, hold a portrait of Nick DeVries on the steps of the Lake County Government Center, where for the past nine months they've pursued answers in Nick's death. 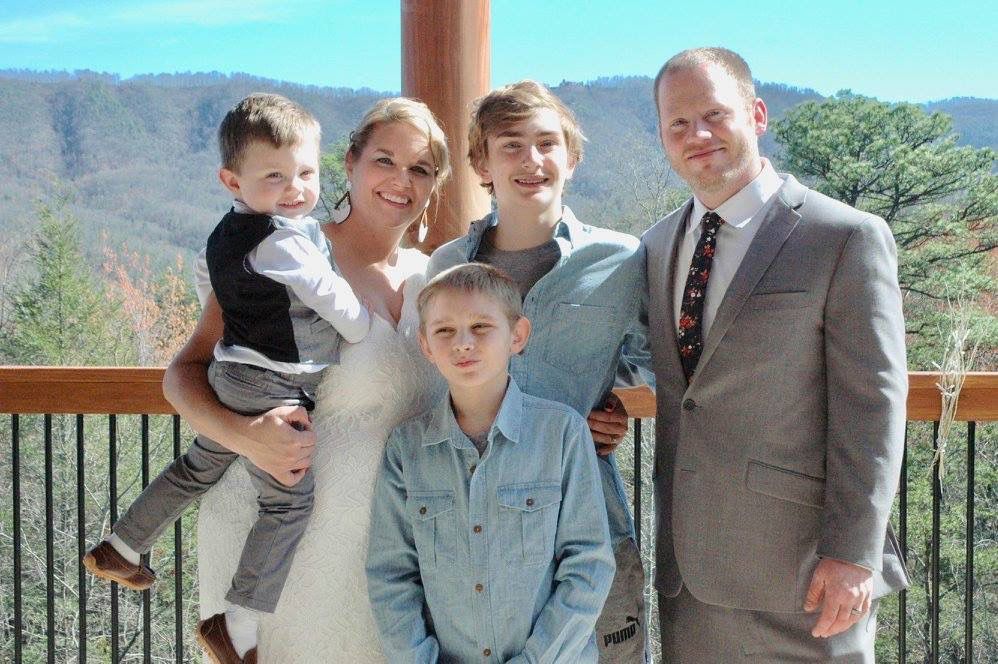 Keri and Nick DeVries, of Lowell, take a family photo with three of their four children.

In the death of Lowell's Nick DeVries, such answers appear to be stalled in the same spot where a pickup truck crossed the center line of U.S. 41 in Cedar Lake, killing the 32-year-old husband and father.

The four children, wife, brother and other close family Nick left behind deserve those answers more than anyone.

Nine months have passed since Nick's death, and key evidence in the case appears to be locked away in one or perhaps two hospitals. Meanwhile, real questions exist regarding how aggressively that information has been pursued.

CL Vending employee identified as victim in crash on U.S. 41

The case affords a moment for all of us to put ourselves in the shoes of surviving family who just want to know what caused the wreck and if justice should be sought.

And it reminds us to demand more responsiveness of an often slow-moving legal system in sifting through facts to provide those answers — and justice if warranted.

Tears well in the eyes of Brian and Keri DeVries as they recount the life cut tragically short of their brother and husband, respectively.

Brian's memory drifts back to childhood, with recollections of an ornery 8-year-old Nick trying to get a rise out of his older brother.

It was a never-ending attempt to induce a bout of brotherly roughhousing with Brian.

That ornery kid worked much of his life to overcome a speech impediment, eventually growing into a confident adult, Brian said.

Nick excelled at baseball as a young man, and then became a hardworking delivery driver for a Cedar Lake vending company, working long days that started before 4 a.m.

"We often caught up throughout the workday, talking about baseball and discussing family life," Brian told me recently. "I miss sharing stories with him about our beloved Cubbies."

Keri DeVries misses the man Nick had become as a husband and father to their four children.

Two of those children, Ryder and Adley, now ages 1 and 4, came into the lives of Keri and Nick by birth. Two others, Gabriel and Nolan, now ages 11 and 16, were Nick's stepsons, but in name only. Nick was raising them as nothing short of a father.

Keri remembers Nick, her husband of eight years, crying for the first time in her presence when their two biological children were born.

Baseball always will be Keri's favorite sport because it's how she met Nick, when he was helping coach her son Nolan's team.

Throughout their married life, "He would work hard all day, and when he walked through the door, the first thing he did was scoop his babies up and love on them. And then he would wrestle with Ryder, our 4-year-old, for at least a half-hour," Keri said.

"It didn’t matter how tired he was. His playtime with his kids always happened. He also made sure that every morning and after work he kissed me. That never failed after the eight years of us together."

Those kisses stopped nine months ago, though not through the failing of Nick's great love for his wife and family.

It was about 4:15 a.m. May 21, and Nick had just begun one of those early morning vending truck shifts that so aptly defined his work ethic.

His box truck was heading north in the 12200 block of U.S. 41 when a southbound pickup truck, driven by a 23-year-old Cedar Lake woman, crossed the center line and plowed into the front of Nick's vehicle, killing him.

There may be nothing nefarious about Nick's death.

Keri and Brian both accept that it could be the result of a tragic accident.

But nine months later, the case remains open, and no answers have been provided that would put this matter, and the family's uncertainties, to rest.

The Lake County Sheriff's Department reports it has requested toxicology reports from Franciscan Health hospital in Crown Point and University of Chicago hospital, where the woman who caused the accident was airlifted shortly after the crash.

Such reports would be the key to noting whether drugs or alcohol were involved in the crash that took Nick's life.

To date, neither hospital has complied with police requests for the information, the investigating officer said last week.

It's also important to note, by law, hospitals aren't permitted to discuss the care of any patients with the public at large.

But questions remain about how aggressively authorities actually are pushing for these answers.

Family members say they have reached out to police numerous times, even making in-person visits to the Lake County Government Center in Crown Point, seeking closure in the case.

Police and Lake County Prosecutor Bernard Carter point the finger at the hospitals not complying with police requests.

But the family finally received what could be a crucial breakthrough this past week.

On Monday, Carter invited the family into his office to discuss their concerns.

He informed them he would be serving formal subpoenas for toxicology results that may have been collected by both hospitals.

As of Friday, Carter and Nick's family were awaiting results of those subpoenas.

Carter acknowledges it shouldn't have taken nine months to get to the point in which formal subpoenas were filed and also notes he only became personally aware of the matter when I began calling him about it two weeks ago.

"I apologize on behalf of the Lake County prosecutor's office and law enforcement," Carter told the family.

Brian and Keri DeVries are grateful for the personal meeting with Carter on Monday, but they're also entitled to the frustration they feel with how long it took for the justice system to aggressively pursue answers in the case.

It's good the family finally may be on the road to garnering those important answers.

And it's clear they're not just out for punishment.

"If this was a horrible accident, we will accept that," Keri told me. "But the fact is, my husband is dead, and no one has answered the important questions."

Those answers are owed to the DeVries family and to all of us.

A man is dead, and we all should be clamoring for more urgent pursuit of the truth, wherever that pursuit may lead.

"We all deserve extremely harsh judgment if we continue to dishonor our front-line health care workers."

MARC CHASE: We fight on for the Region through any crisis; please support the battle

We pledge that all of Northwest Indiana will continue to benefit from our work, even as we face steep economic challenges. But we can't do it without your help.

Amanda and Matthew Bell are spending silent nights this holiday season, mourning the loss of their baby in the wake of an allegedly unlicensed midwife, according to state regulators.

MARC CHASE: Help Valpo 2-year-old in the fight of his life

No couple should have to discuss end-of-life scenarios with their doctor — for their 13-month-old child.

The parents among us know the sweet exhilaration of our children's victories.

Few things are more relaxing and transformative — in one fell swoop — than a good haircut.

Brian DeVries, of Cedar Lake, and Keri DeVries, of Lowell, hold a portrait of Nick DeVries on the steps of the Lake County Government Center, where for the past nine months they've pursued answers in Nick's death.

Keri and Nick DeVries, of Lowell, take a family photo with three of their four children.