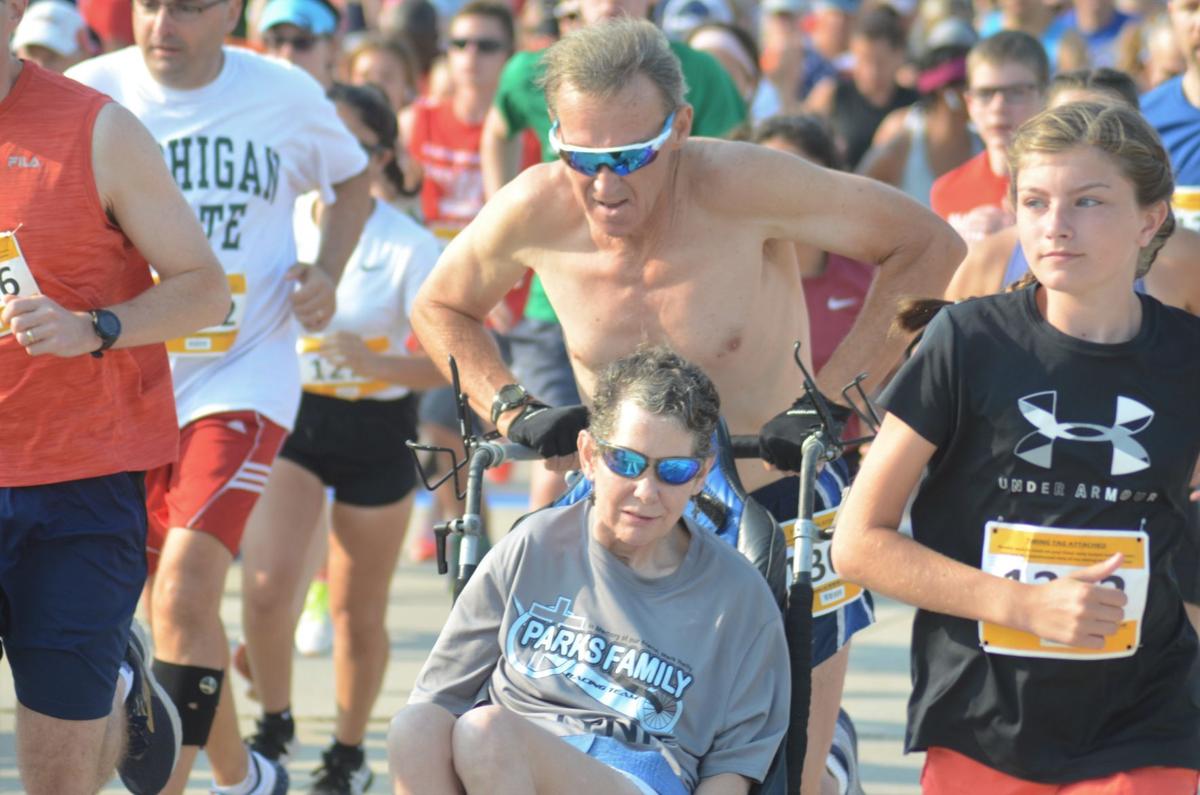 Jamie and Lynn Parks participate in their 300th race on Fourth of July in Tinley Park. 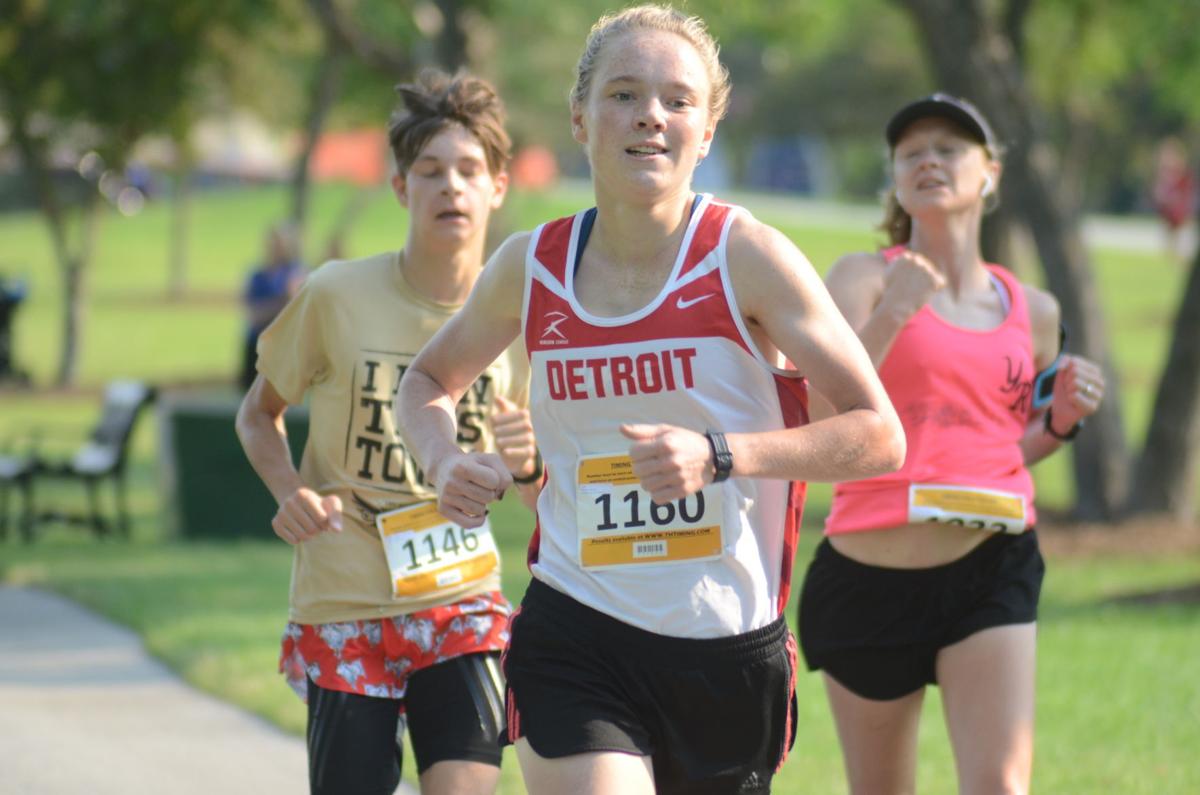 Tinley Park native Rebekah Harden was the top female finisher at the Stars and Stripes 5K. 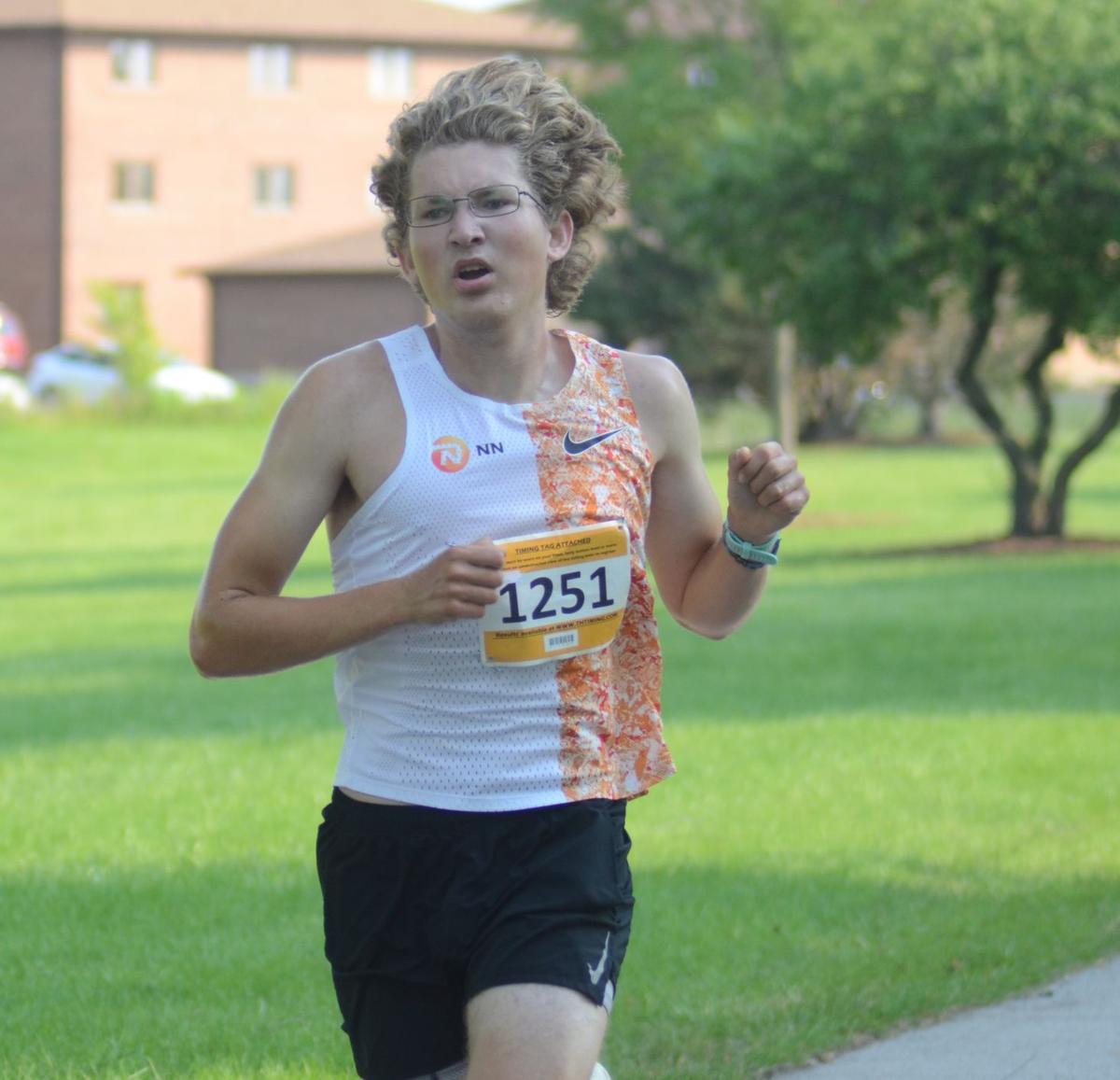 It seemed like nothing could stop the legendary Tinley Park husband-and-wife team of Jamie and Lynn Parks.

The couple hit a milestone of 300 races on the Fourth of July with Jamie pushing Lynn in a wheelchair at the Stars and Stripes 5K run in his hometown.

When asked how much longer the 59-year-old Jamie could continue to push his 58-year-old wife’s chair in competition, he said that “I think 500 would be great.”

He added however, “hopefully my body will stay in one piece. Lately it’s been a hamstring. It’s one thing or another as you get older.”

The couple might be stopped for the time being.

Two days after hitting the 300-race milestone, he broke his right elbow doing a project at home, and it's up in the air how much they will be able to compete in the near future.

A look back at the first 300 races has found the Parks logging more 20,000 miles, competing in the Boston Marathon twice, carrying the Olympic torch in the 2002 relay, giving speeches and having a Discovery Channel documentary made about them in 2008.

The two were set to be wed in 1987, and Lynn suffered severe injuries after a car accident and was in a coma for more than two weeks. When she came to, could not walk, but made a vow that when she took her vows, she would walk down the aisle.

After seven years of rehab, that big moment came in 1994.

For years, the pair had been inspiring people with their story and their daughter, Annalyn, joined the team and has been competing with her parents.

“Marathon Love,” the Discovery Channel documentary that was first broadcast on Dec. 14, 2008, is now more than a dozen years old and the premise of the show was the couple’s journey to the Boston Marathon.

Before Jamie’s elbow injury, they were eyeing another marathon this year. After a drawing placed them as alternates in the 2021 Chicago Marathon, they were mulling a marathon in Milwaukee.

Those plans are on hold.

Not only do the two compete in races, Jamie is almost always training with Lynn all over Tinley Park.

The former mailman said he cherishes the time he spends with Lynn and that’s why he does this.

“After what happened with Lynn’s accident, we came upon this idea to run together,” he said. “It lets us spend even more time together. It takes one of my passions in life — running — and my main passion in life — which is my wife — and puts those together.”

Morgan was a two-time state qualifier for Marian Catholic High School in Chicago Heights in the Illinois High School Association Class 2A track meet in 2018 and 2019, but his senior season was wiped out by the pandemic.

He gave up competitive track at Marquette University but continues to run on his own and was impressive in his first race in more than a year.

“I was like alone the whole race,” he said. “It was nice to know I could run a decent time pretty much running alone.”

The female champion was Tinley Park’s Rebekah Harden, a Lincoln-Way North graduate who attended the University of Detroit Mercy and transferred to Illinois Wesleyan, where she qualified for the Division III nationals in the 1500-meter run in track this spring and finished 12th with a 4:40.11.

She said it was her first road race.

“It was fun,” she said. “It was fun to see all of these runners compete. It was a competitive race.”

Sgt. Leanne Bender-Chelepis has been sworn in as the new police chief of Frankfort.

Orland Park's plans for the historic Boley Farm include rehabbing some buildings and demolishing others.

Sandburg athlete leaps hurdles to excel on field, in classroom

Trinity Christian volleyball player a hero on and off the court

In August 2016, Mokena’s Brooke Veldman had to be rescued from Lake Michigan and later taken to a hospital.

At 16, Declan Schatz, an Andrew junior, becomes one of the youngest to win the Tinley Turkey Trot.

Jamie and Lynn Parks participate in their 300th race on Fourth of July in Tinley Park.

Tinley Park native Rebekah Harden was the top female finisher at the Stars and Stripes 5K.