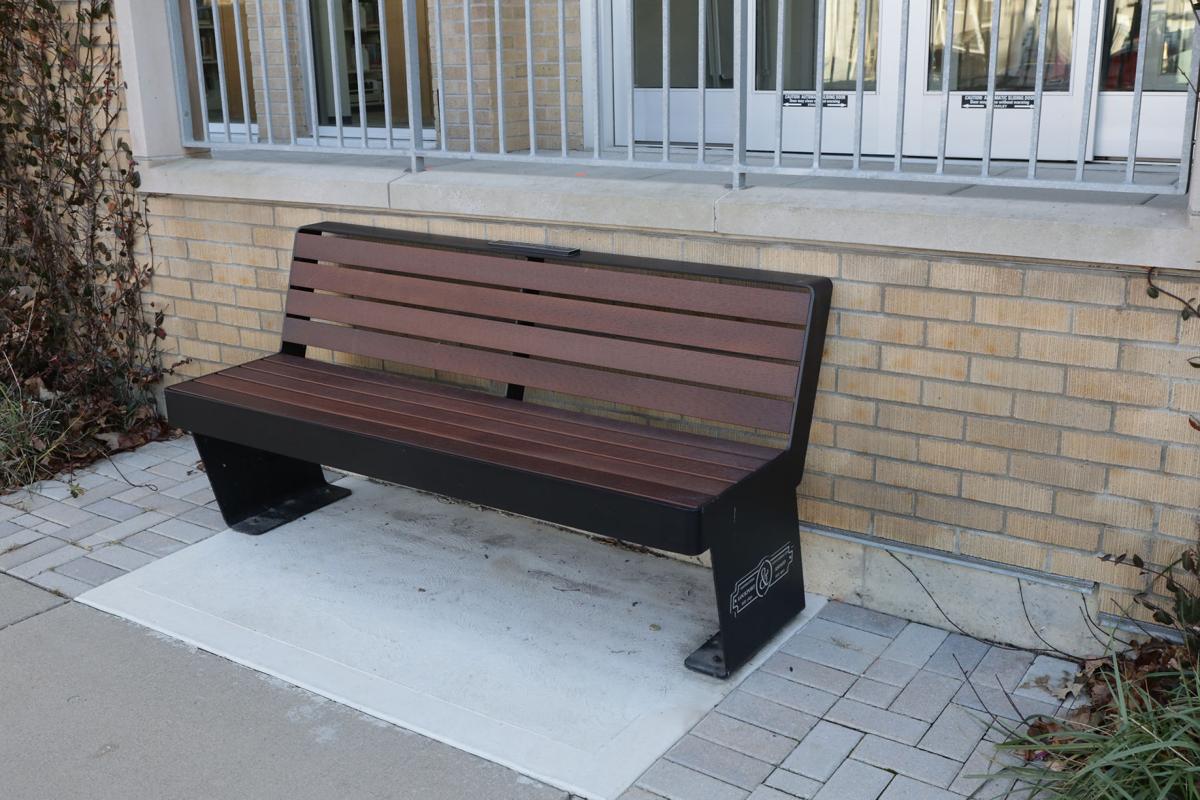 Benches from Asiago, Italy, in Lockport are part of the Sister Cities exchange. 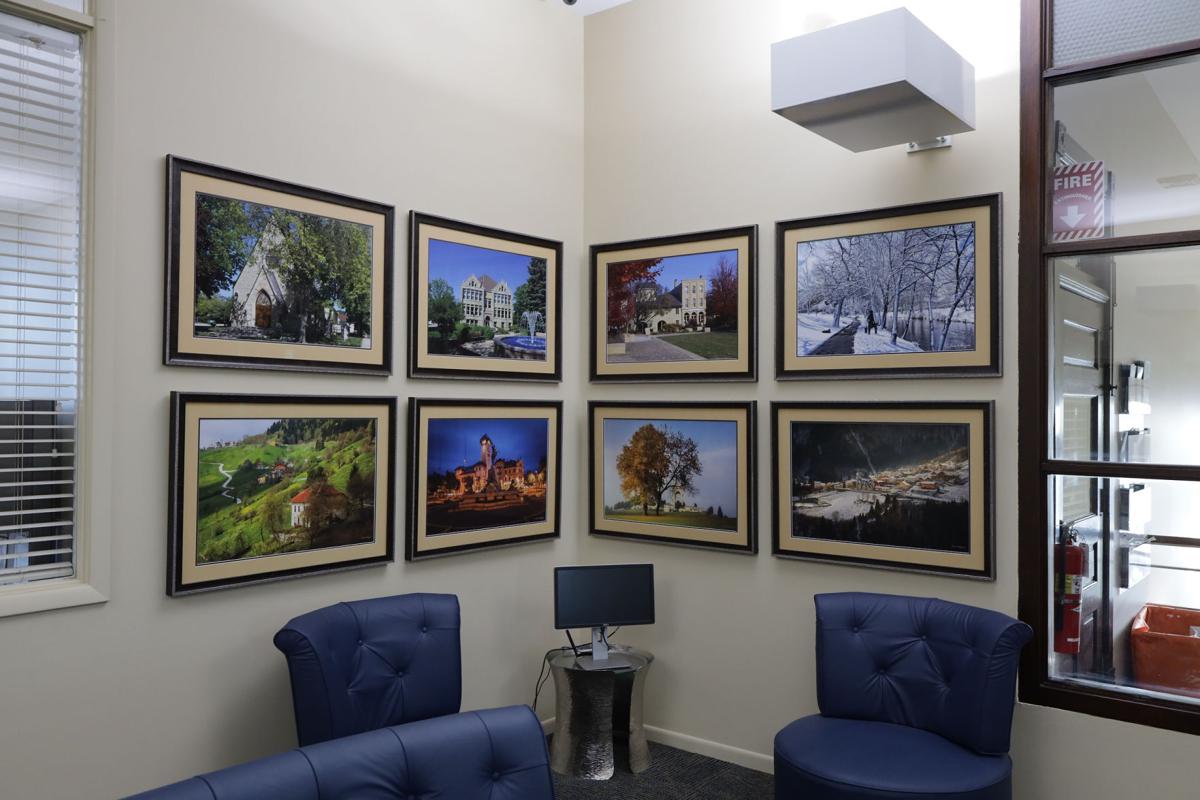 The third floor of Lockport City Hall contains a display about the Sister Cities of Lockport and Asiago. 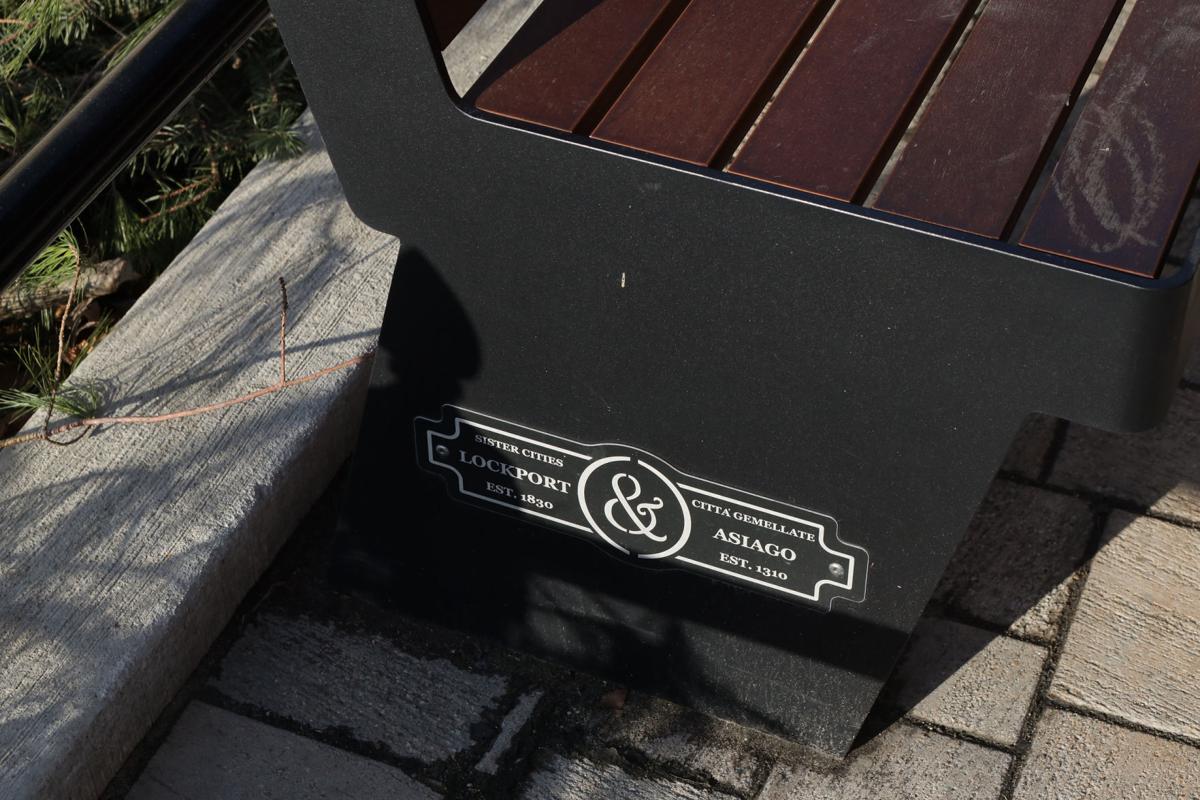 The benches from Asiago, Italy, show their provenance. 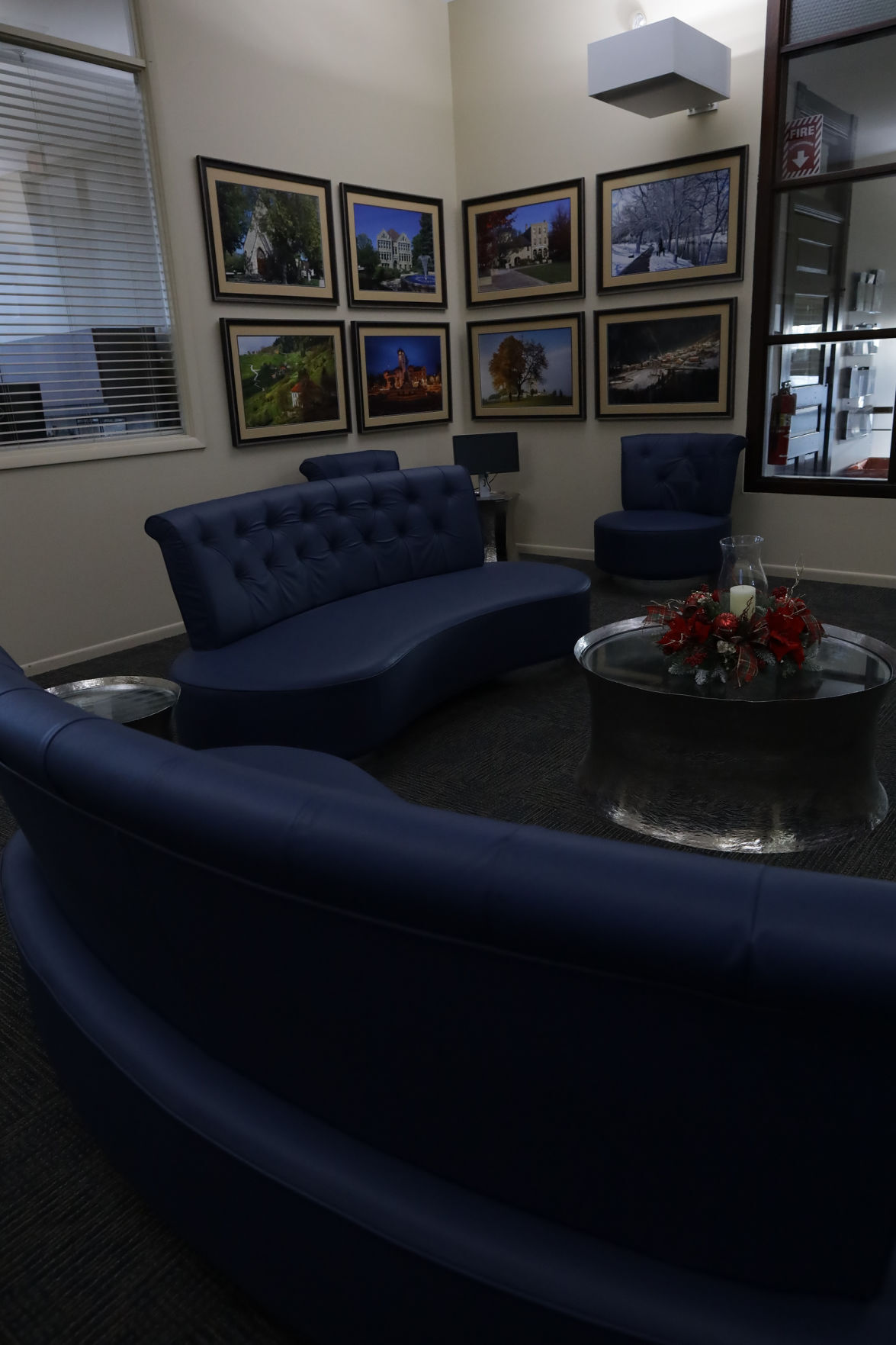 The furniture in the lobby of Lockport's City Hall is from Asiago, Italy. 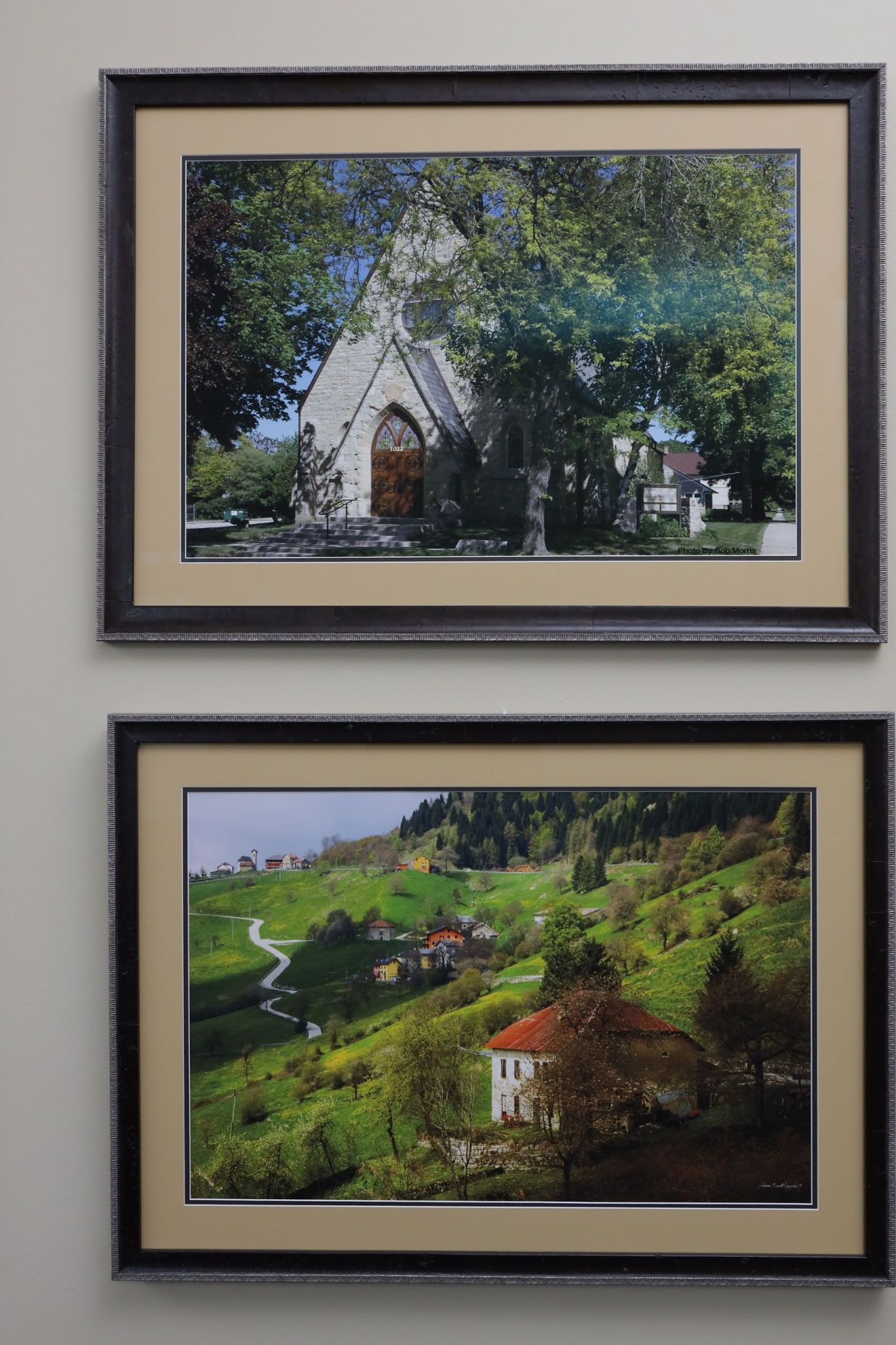 Photos of Lockport, top, and Asiago show sights of spring in the Sister Cities. 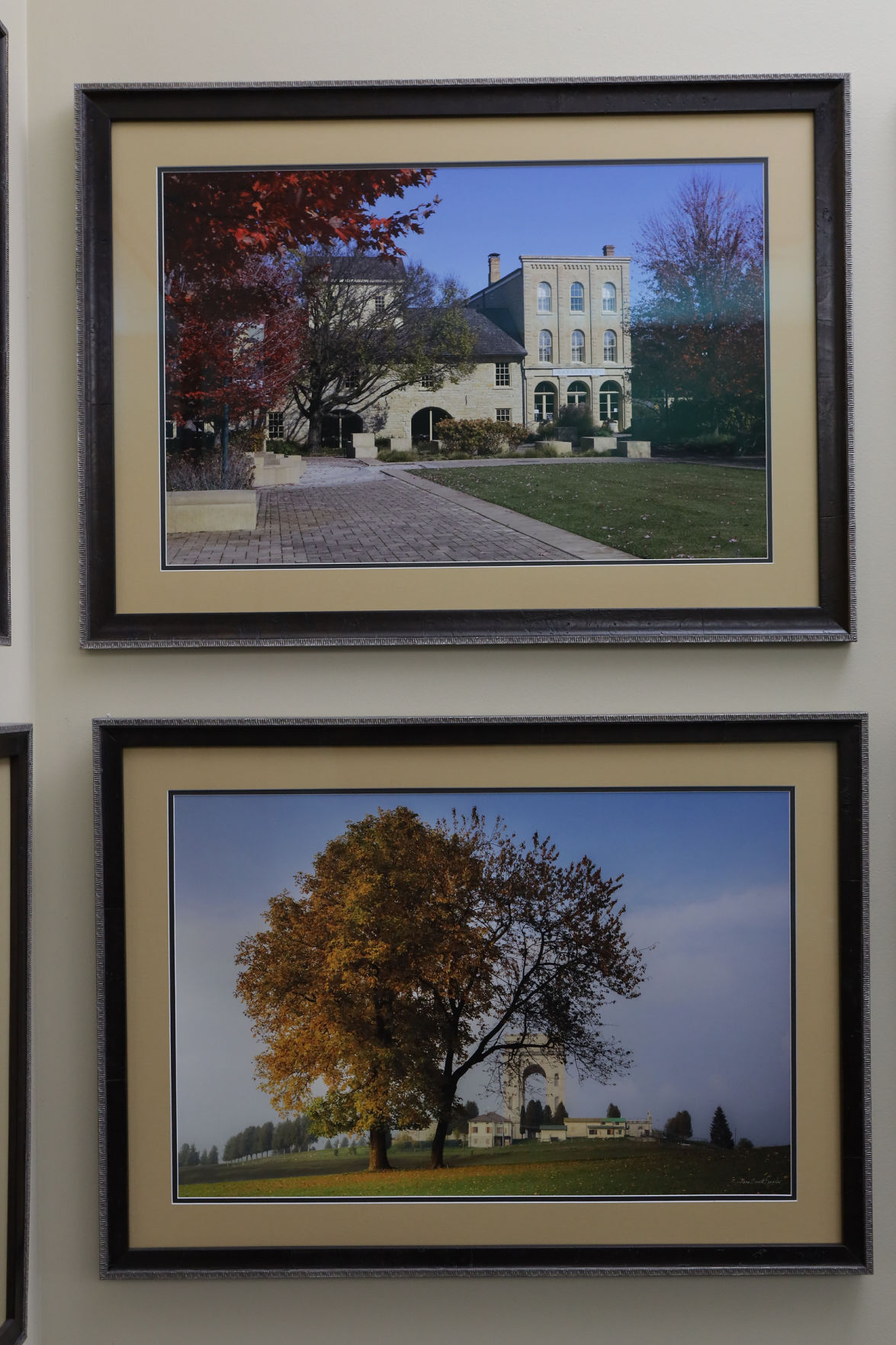 Photos of Lockport , top, and Asiago depict fall in the towns that have been Sister Cities since 2014.

Most people probably wouldn’t see any notable connection between the Midwest prairie town of Lockport and the plateau hamlet of Asiago in the foothills of the Italian Alps. But Patti Pastore isn’t most people.

With family roots in the area, Pastore made sure to include Asiago as a stop on her Italian vacation in 2011. While there, not only did she manage to track down some long-lost cousins (with the help of the very friendly and accommodating townsfolk), she also noticed many names of people and businesses that were similar to those in Lockport. Back in the States, her overseas experience and that sense of warm familiarity led Pastore to explore more about the town and the Sister Cities International program.

“I knew I had heritage there and wanted to learn more about Asiago,” Pastore says. “So I started doing some research and found that there were around 30 families who had ancestors immigrate to Lockport from Asiago. And that was when the idea began to come into focus.”

In 2013, Pastore approached Lockport Mayor Steve Streit about the possibility of forging a transatlantic bond between the town and her ancestral home of Asiago through the Sister Cities program — a partnership that came to fruition in October of 2014 with an agreement signing via Skype between Streit and Asiago Mayor Roberto Rigoni Stern. The Lockport Sister Cities Committee was formed (with Pastore serving as president), and the program was slowly rolled out to the community, first by selling cheese, craft beer, organic jams and other items imported from Asiago from a tent at the Old Canal Days festival in 2015.

“That first year was a huge success,” Pastore says. “It really gave our program an opportunity to introduce more people to our Sister City program.”

That introduction included transforming the third-floor lobby of City Hall into the centerpiece of the Sister City program. The committee contacted a photographer in Asiago who gathered photos of various areas throughout the plateau to create a display of museum-quality images highlighting the four seasons of Asiago and the four seasons of Lockport. The display also includes a video screen scrolling scenes from around Asiago, as well as a digital copy of an ancient protected map of the plateau mounted on canvas.

Pastore and her committee look for new opportunities to build the connection between the two towns. For instance, after a storm in October 2018 devastated the forest plateau in Asiago, Lockport had a tree, a bench and a plaque placed in a park there to show support and demonstrate the towns’ bond.

The committee also works to get Lockport citizens more involved in the partnership. Money raised from selling plaques for those downtown benches helped fund two trips that sent a student from Lockport Township High School to the Sister Cities International leadership conference to meet dignitaries and other students from around the world and share their interests and ideas. After the pandemic has subsided, the committee would like to organize a trip to Italy for approximately 20 LTHS students — with a few days in Asiago, of course.

It's all part of strengthening a bond that has become a part of the fabric of      Lockport and Asiagos. And Pastore couldn’t be more happy about the way it’s all played out.

“I can’t say enough about the support we’ve received from the City of Lockport. Not only have we been welcomed, we’ve been embraced.”

Built in 1881, The John Humphrey House has plenty to say about Orland Park and one if its first families.

This is the life.

Treading the dangerous waters of the 2020 pandemic is exhausting. Small businesses are struggling to stay afloat as they deal with restriction…

Even at 13, Nick Ketchen is no stranger to leadership.

Benches from Asiago, Italy, in Lockport are part of the Sister Cities exchange.

The third floor of Lockport City Hall contains a display about the Sister Cities of Lockport and Asiago.

The benches from Asiago, Italy, show their provenance.

The furniture in the lobby of Lockport's City Hall is from Asiago, Italy.

Photos of Lockport, top, and Asiago show sights of spring in the Sister Cities.

Photos of Lockport , top, and Asiago depict fall in the towns that have been Sister Cities since 2014.