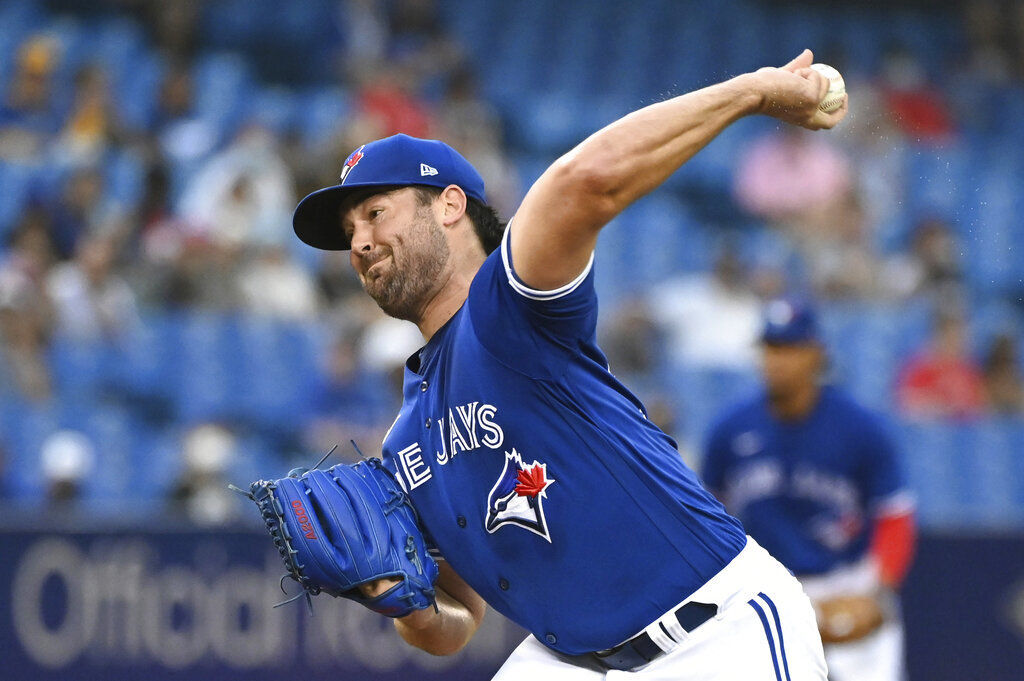 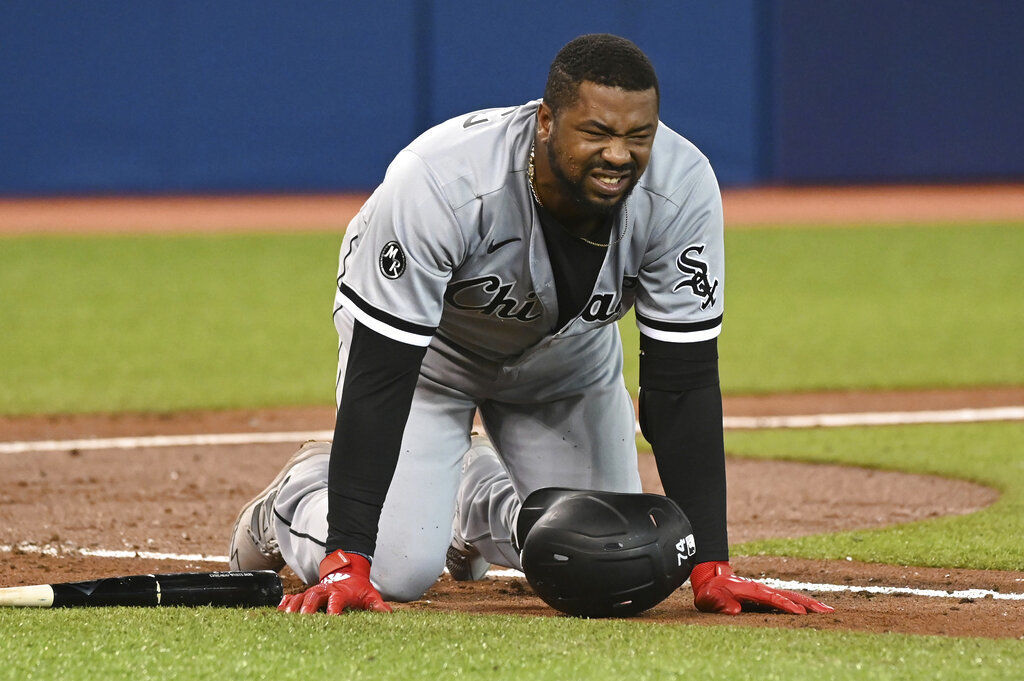 Chicago White Sox's Eloy Jimenez grimaces after being hit on the foot by a pitch from Toronto Blue Jays' Robbie Ray during the sixth inning of a baseball game Wednesday in Toronto.

TORONTO — Alejandro Kirk broke a tie with an RBI single in the eighth inning and the Toronto Blue Jays beat the Chicago White Sox 3-1 Wednesday night.

After Blue Jays starter Robbie Ray matched his career high by striking out 14 over seven innings, Tim Mayza (4-1) worked a perfect eighth and Jordan Romano finished for his 13th save in 14 chances.

White Sox left-hander Aaron Bummer (2-5) struck out the first two batters he faced in the eighth before giving up singles to Teoscar Hernández, pinch-hitter Breyvic Valera, and Kirk.

José Ruiz replaced Bummer, and Toronto loaded the bases when Lourdes Gurriel Jr. reached on an error by Yoán Moncada. Randal Grichuk followed with a four-pitch walk, making it 3-1.

White Sox shortstop Tim Anderson went 0 for 4 in his return after missing four games because of tightness in both hamstrings.

Anderson's second strikeout was the 14th for Ray. That boosted Ray's season total to 192, one more than the New York Yankees' Gerrit Cole for the AL lead. Philadelphia's Zack Wheeler leads the majors with 204 after fanning 10 Tampa Bay batters Wednesday.

Ray is the first left-hander in Blue Jays history to strike out 14 in a game.

Chicago opened the scoring in the third when Leury Garcia led off with a single, stole second and third, and scored on a two-out hit by Moncada.

The Blue Jays tied it in the fourth on Corey Dickerson's two-out RBI triple.

White Sox right-hander Lucas Giolito allowed one run and five hits in six innings. He walked one and struck out six. Giolito has struck out 175 this season, fourth most in the AL.

Blue Jays: OF George Springer (sprained left knee) is eligible to come off the injured list but likely won't return until the weekend, manager Charlie Montoyo said. … INF Cavan Biggio has been diagnosed with a sprained left elbow after he was injured diving for a ball in a rehab game at Triple-A Buffalo last Friday. Biggio went on the injured list Aug. 3 because of tightness in his back. ... The Blue Jays activated RHP Joakim Soria (right middle finger) off the injured list and optioned RHP Connor Overton to Triple-A.

The Northern League, which was known as the Midwest Collegiate League before its recent rebranding, announced on Thursday the addition of a Crown Point franchise.

CLEVELAND (AP) — Doug Jones, a five-time All-Star reliever who had his best success closing for the Cleveland Indians, has died. He was 64.

Purdue rolls in second half to top Northwestern at Wrigley

PITTSBURGH (AP) — Bill Virdon, the steady centerfielder who won the 1955 National League Rookie of the Year for St. Louis and guided the Houston Astros to three straight postseason appearances as a manager, has died. He was 90.

MLB is operating under a business as usual idea, though the league knows things could soon get very unusual

The prevailing line right now across MLB — a league facing a lockout if a new collective bargaining agreement isn’t signed by Dec. 1 — is that things are business as usual.

AP source: Pirates bring back 1B Tsutsugo on 1-year deal

With a possible lockout on the horizon, it's been mostly business as usual on the free agent market — so far.

Chicago White Sox's Eloy Jimenez grimaces after being hit on the foot by a pitch from Toronto Blue Jays' Robbie Ray during the sixth inning of a baseball game Wednesday in Toronto.