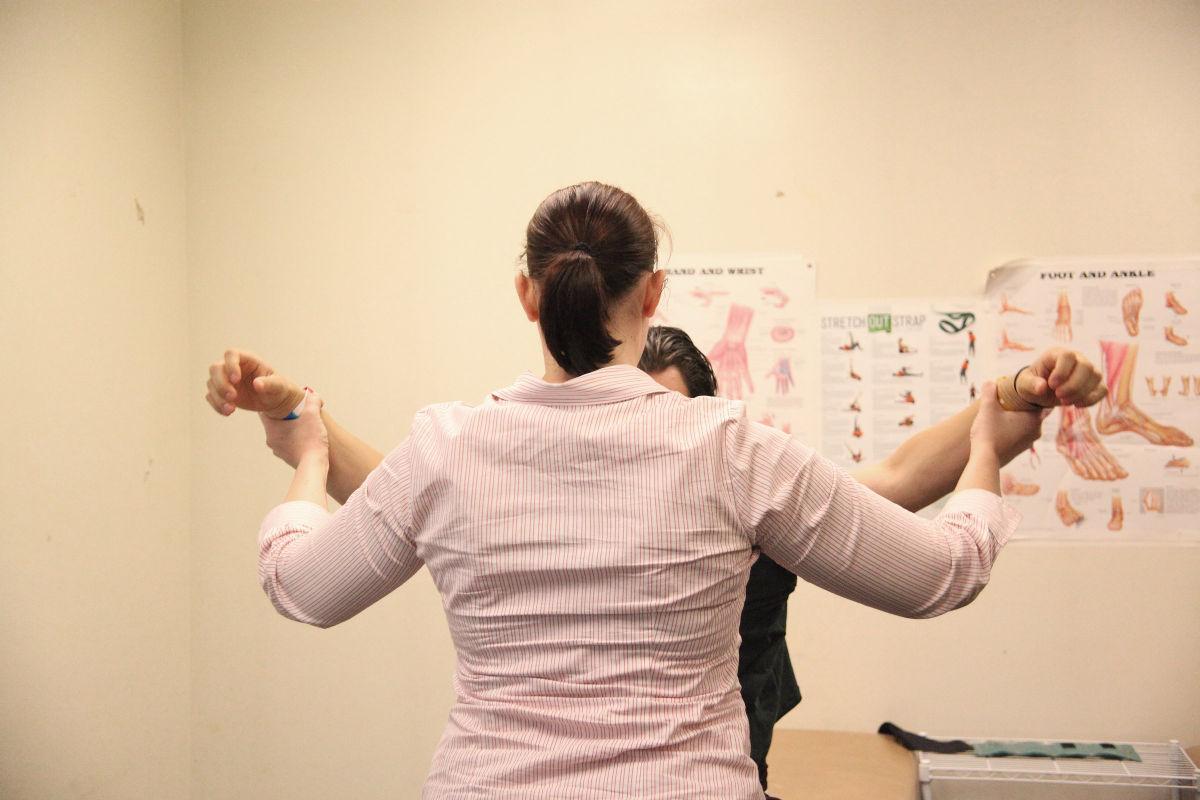 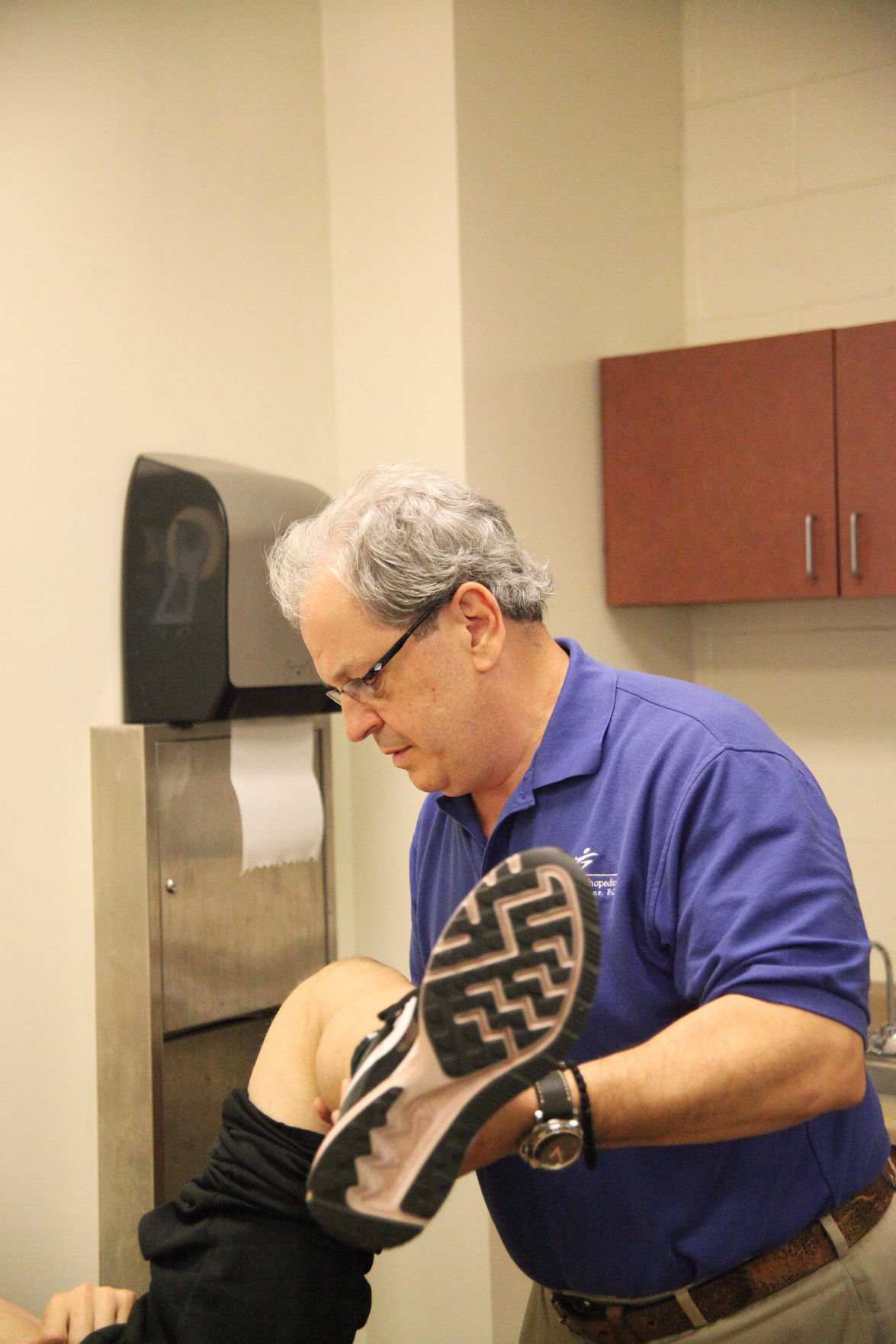 Dr. Keith Pitchford examines a player's leg. Staff members from Great Lakes Orthopedics and Sports Medicine perform physicals for the RailCats before the start of the season. 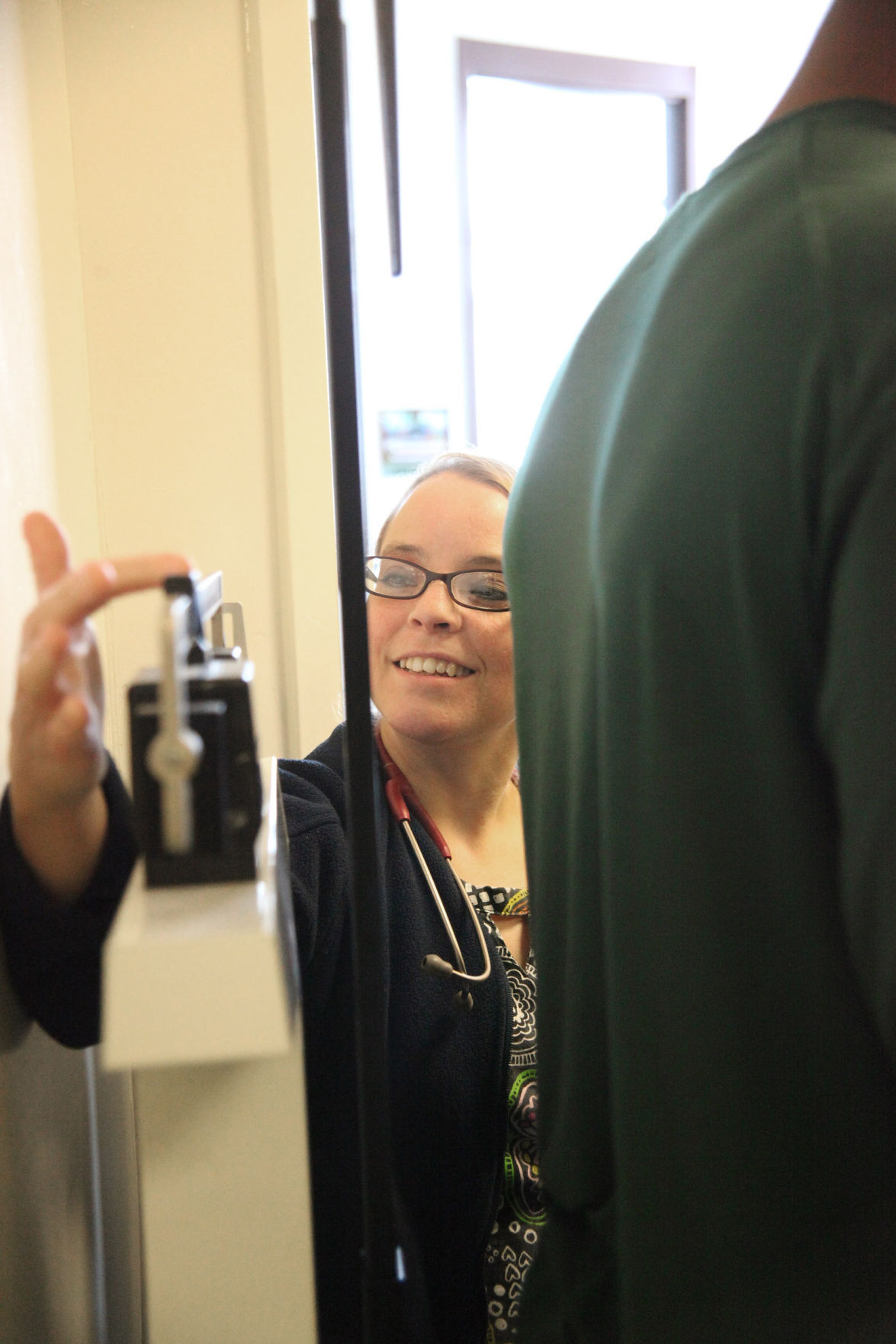 Brenda Erickson measures the players weight and height. Staff members from Great Lakes Orthopedics and Sports Medicine perform physicals for the RailCats before the season starts. 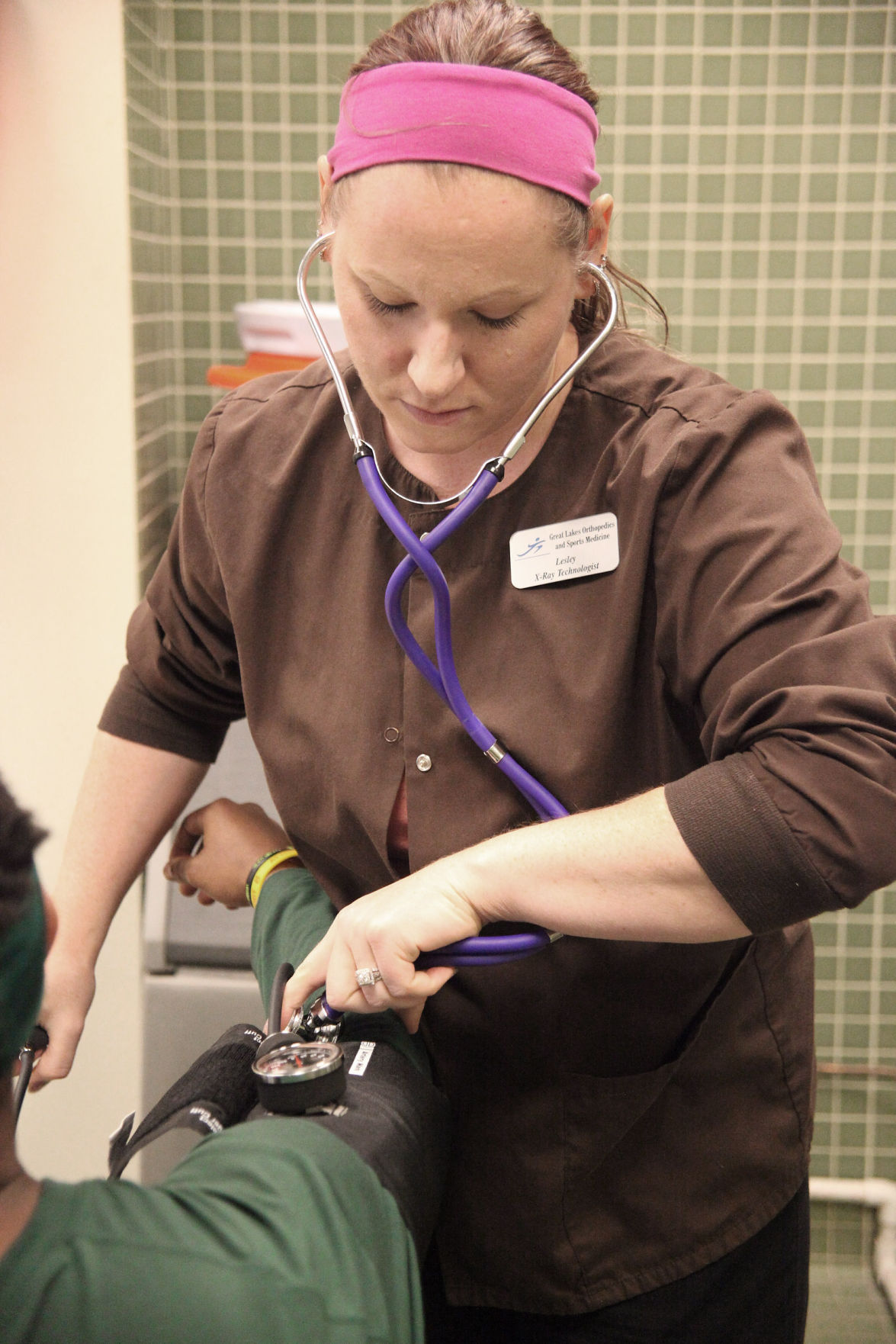 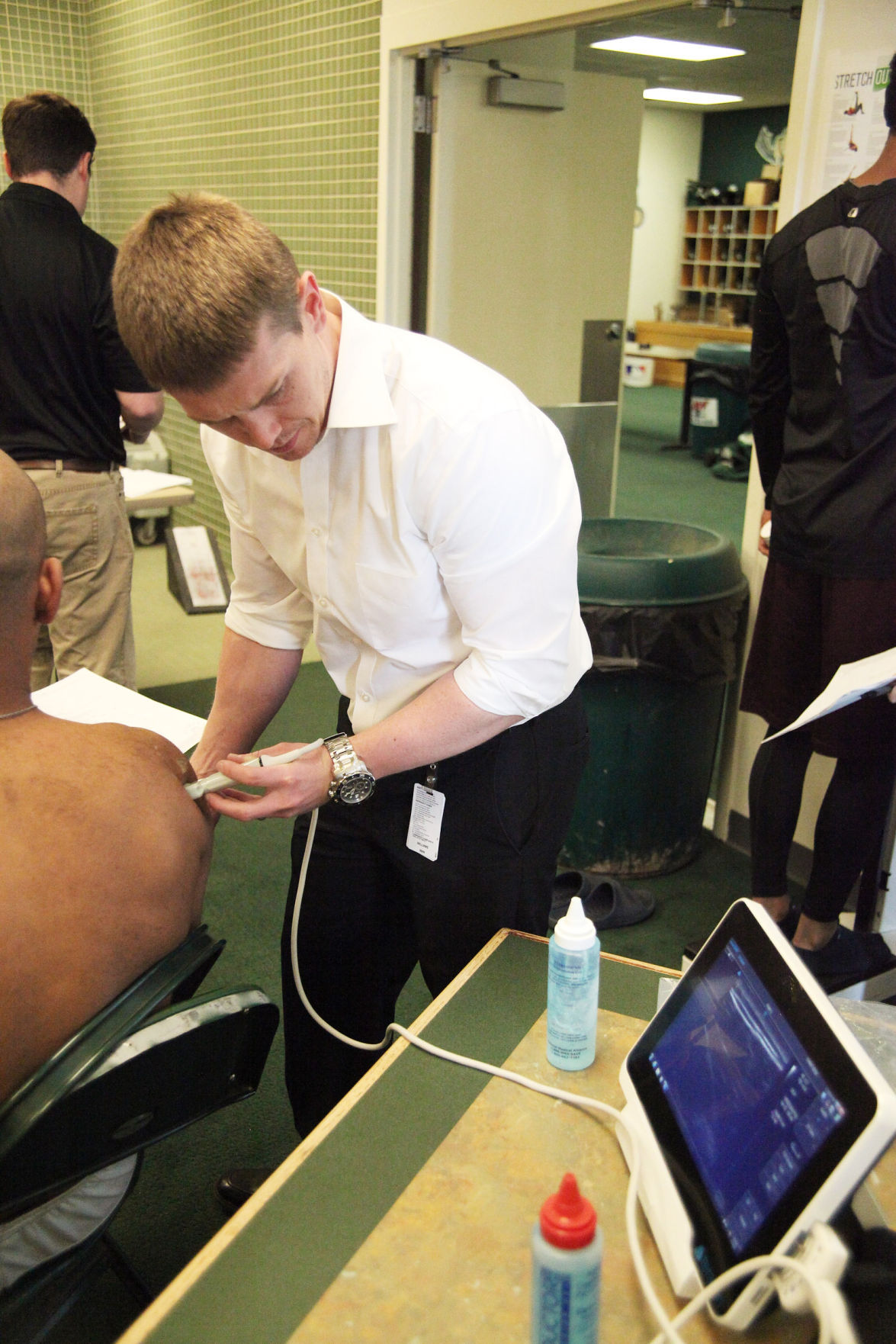 Tim Williams does Ultrasound checks on RailCats pitchers and catchers. Staff members from Great Lakes Orthopedics and Sports Medicine perform physicals for the RailCats before the season begins.

The RailCats chief doctor, who practices at Great Lakes Orthopedics and Sports Medicine, has been with the franchise since its first season in 2002. When a player is injured, he's in charge of giving manager Greg Tagert a summation of what to expect with recovery, and how long the player will likely be out of the lineup.

When the season starts, as it will with today's kickoff to spring training, he performs physicals on each incoming player. This isn't the average insurance physical.

Often, players formerly of affiliated baseball have been dropped after injury or surgery.

Before the RailCats accept the player to a contract, he'll run through a physical. This is standard in baseball as any player joins a club.

"What I'm looking for are any lingering injuries," Pitchford said. "If one of our players has had surgery, I want to find out if it has resolved as we hoped it would. New players coming usually come with a bit of history. They left their last team for one reason or another, and we need to know if they're fit to play."

In affiliated baseball, the physicals can last hours, said Eric Eadington, a pitcher in his first season with the 'Cats. Previously in the L.A. Dodgers organization, he reached as high as Double A Chattanooga in 2014 before he was sidelined with Tommy John surgery, his second.

He said that he underwent everything from blood tests to urine tests before starting spring training with the Dodgers as the team tested everything from hitter's eyesight to cholesterol.

"These are standard," said Eadington, who has gone through seven in his pro career. "With me, they'll pay a little extra attention because I've had surgery."

Pitchford said he particularly pays more attention to problem areas with players how have had nagging injuries. He admits to asking questions and talking to players about their offseason preparation and rehab to learn where concerns could pop up.

"I drill down on an injury," Pitchford said. "If it was a thumb injury, I ask who was the doctor that performed the surgery, what was the procedure and how the rehab went."

There have been players that have failed a physical whom Tagert has sent home. The last that Tagert could remember came before the 2013 season when the RailCats won their first American Association title.

"Players with health issues know the situation," Tagert said. "It's not as hard to have that conversation with them as it might be at the end of camp when you have to tell a player that he isn't the fourth outfielder."

Physicals come before players take the field after a trade, too. Players can be passed by one team, but not by another, sometimes voiding a trade.

In the case of Alex Gunn, he joined the team from Laredo in a trade near the end of last season, but was immediately placed on the disabled list with tendonitis.

"We had the ability to send him back, but we liked him so much we wanted to see what he'd do for us this year," Tagert said.

Gunn is one of four lefty pitchers on the roster.

After the day of physicals is done — with ultrasounds for the pitchers and catchers to check their shoulders and elbows — Pitchford discusses the results with Tagert to let him know who and what to watch for.

"He lets me know what he's seen and a few things to be cognizant of," Tagert said. "These things can be difference makers. Everything goes into the equation when we decide who to keep on our roster. We want it to come down to performance."

Fresh off of nearly six weeks in spring training with the Arizona Diamondbacks, Portage grad Anthony Cheky takes another swing at his baseball career.

GARY — Thomas Anderson needed a little prodding to make his way to the RailCats open tryout.

RailCats manager Greg Tagert gives his team a speech at the beginning of every season.

Open Tryouts for the RailCats Baseball team on Wednesday.

The 2016 winner is Nancy Riley of Griffith Indiana. The 2016 Win a Chevy Malibu Sweepstakes put on by The Times Media Co. and Northwest Indian…

Dr. Keith Pitchford examines a player's leg. Staff members from Great Lakes Orthopedics and Sports Medicine perform physicals for the RailCats before the start of the season.

Brenda Erickson measures the players weight and height. Staff members from Great Lakes Orthopedics and Sports Medicine perform physicals for the RailCats before the season starts.

Tim Williams does Ultrasound checks on RailCats pitchers and catchers. Staff members from Great Lakes Orthopedics and Sports Medicine perform physicals for the RailCats before the season begins.