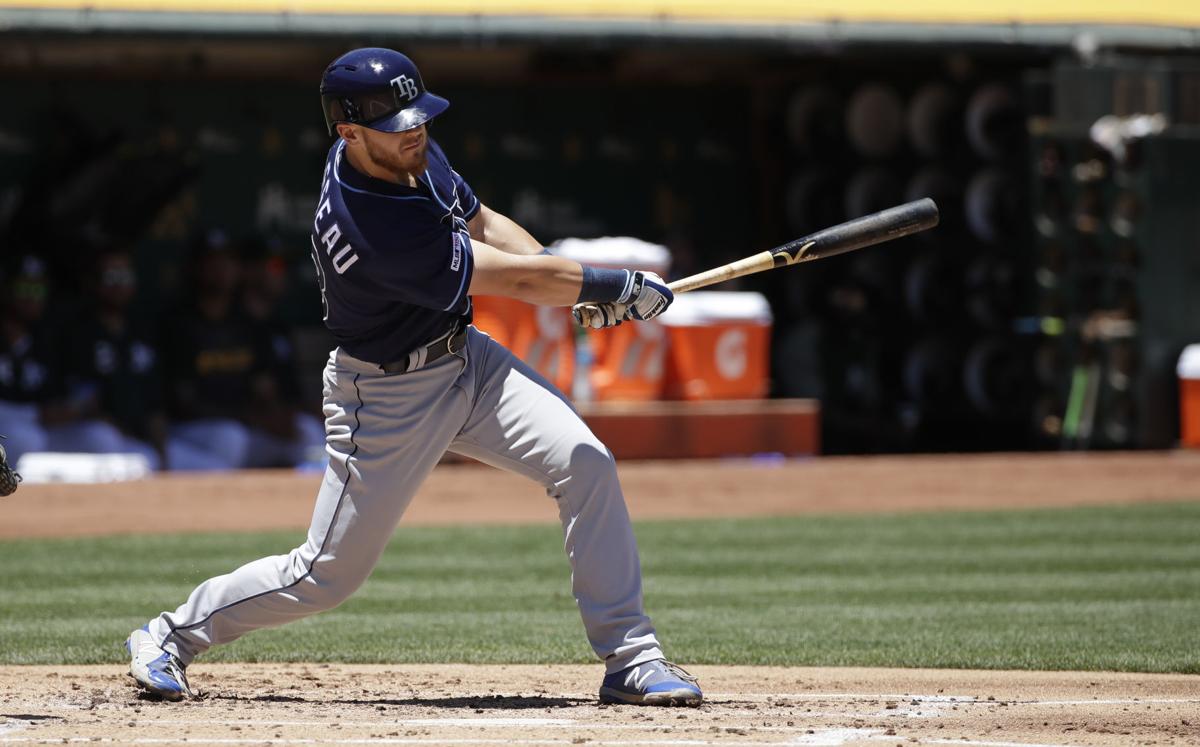 The Tampa Bay Rays' Mike Brosseau hits a single against the Oakland Athletics during the second inning Sunday in Oakland, Calif. 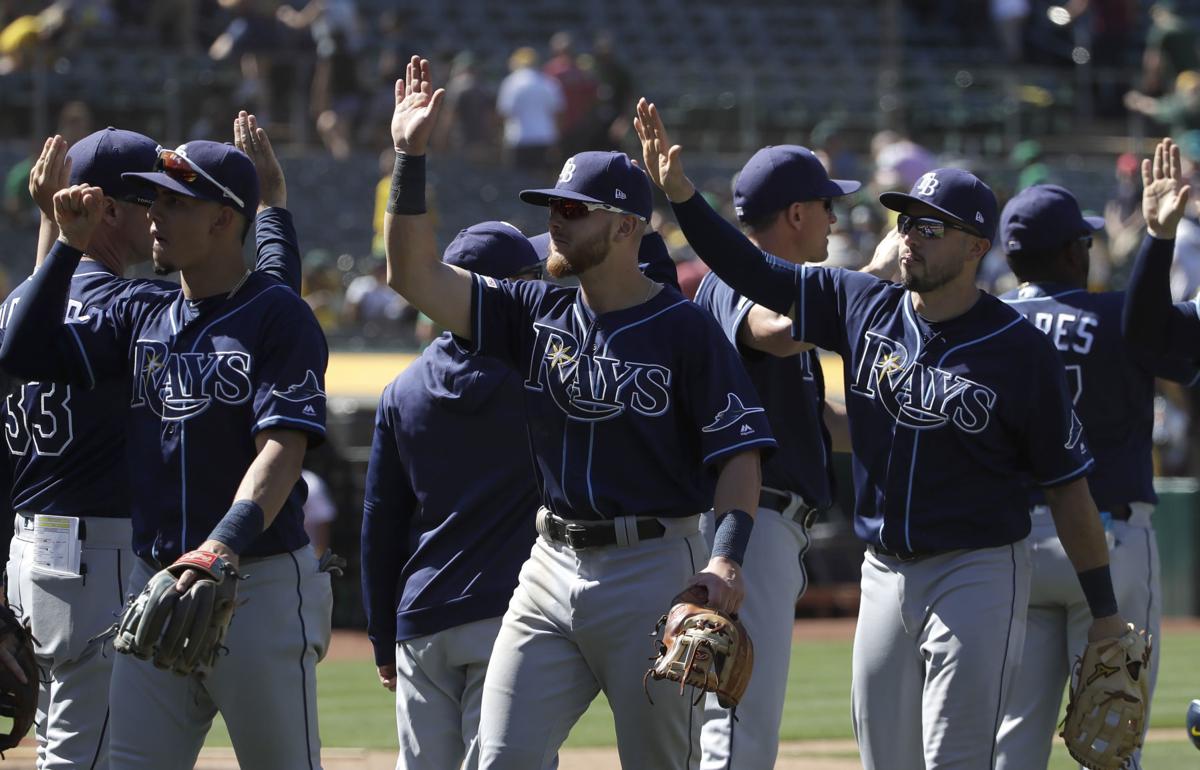 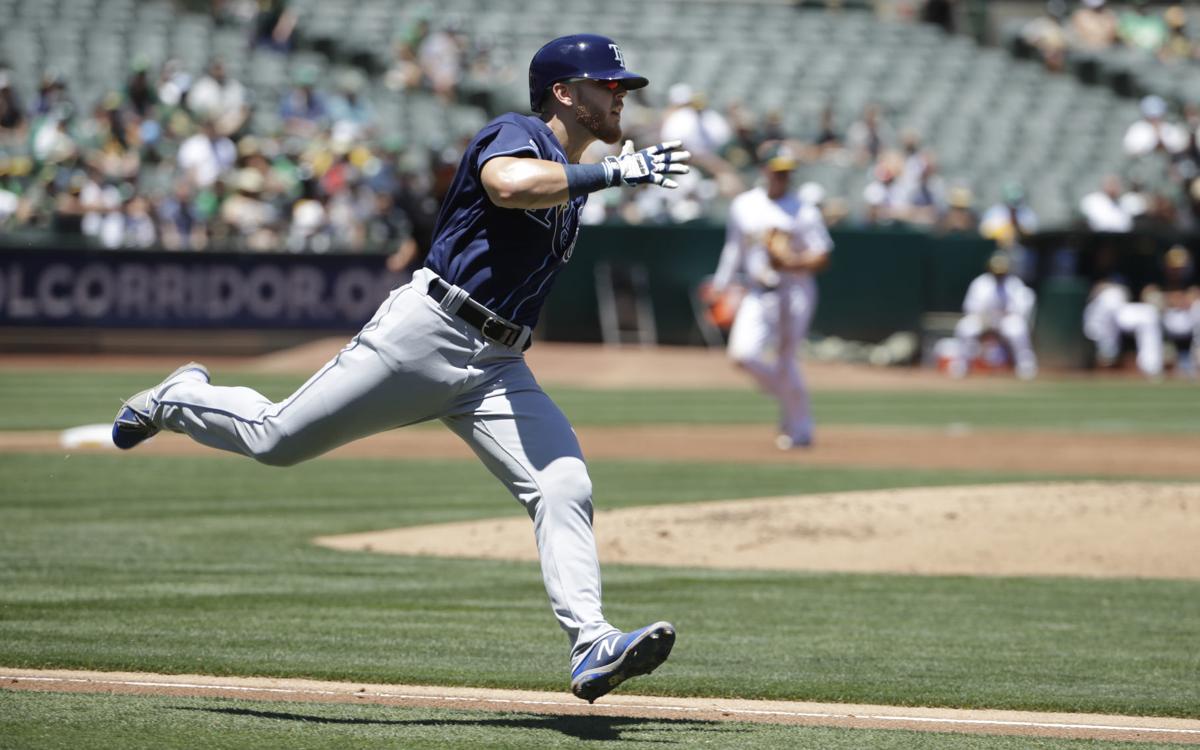 The Tampa Bay Rays' Mike Brosseau runs to first base on his single against the Oakland Athletics during the second inning.

A line drive the other way.

“That’s who he was for three years that I watched him in college,” Healey said.

Except this time, the Andrean alumnus and Portage native wasn’t playing for Oakland University. He was playing against the Oakland Athletics in his major league debut for the Tampa Bay Rays.

On the fourth pitch he saw Sunday, Brosseau notched his first major-league hit.

“It was a pretty surreal moment walking up to the plate for sure,” Brosseau said in a video interview provided by the Rays. “It was definitely pretty cool to see it go through. ... I got the jitters going a little bit, but luckily it fell through and (I) felt a big monkey off the back.”

For Rays manager Kevin Cash, it was a new and welcome sight.

“For him to go up there, stay on a ball, it looked like it was a ball or two off the plate and he stayed on it and smoked it to right field,” Cash said in a quote provided by the Rays. “(He) made some nice plays at third base. It’s really encouraging.”

“He’s playing in a major league ballpark for the first time,” Healey said. “He’s playing in front of 20,000 to 30,000 people. He’s got a ton of people watching him on TV, not that he can’t handle the pressure, but the nerves of that to go up there on your (fourth) pitch of your major league career, hit a ball probably 100 miles (an hour) off the bat, it speaks volumes about him.”

His first hit in Oakland came dizzyingly fast — much like his climb from Oakland to Oakland.

As Valparaiso University coach Brian Schmack put it, Brosseau was “the one that got away.”

But there was something special about him, which Oakland quickly found out.

“He was just a hard-working kid and a good athlete, but just a passion,” Pishkur said. “He was probably 160 pounds when he graduated from Andrean and (that) might be generous.”

When Brosseau got to Oakland University, all he did was hit. In just his sophomore year of college, he hit .321, earning first team All-Horizon League at shortstop. He spent the rest of his career as one of the top hitters in the Horizon League, one Schmack got to see firsthand.

“He was very confident and that went a long way,” Schmack said. “Whatever the matchup was, different guy on the mound, we just couldn’t get him out, and he would hit good pitches, he would spoil them, and then he would hit a mistake and he’d hit it pretty far and hard.”

Brosseau wasn’t even drafted out of Oakland University.

“He was called up as a free agent to fill out a roster, no more than that,” Pishkur said. “There’s no way they were going to think he was going to be this type of player. Fill out a roster, give some guy a rest once in a while. Every time, he had to literally wait for someone in front of him to fail to get an opportunity, and every time he got an opportunity he better produce, and he did.”

That didn’t stop him from racing his way to the major leagues. Everywhere he went, he hit.

After three seasons and change in the minor leagues, just 1,094 at-bats, he learned he was MLB-bound on the side of the road as Durham traveled from Pawtucket to Scranton.

“He’s worked extremely hard. He’s been passionate about the game since before I’ve known him. He’s just an extremely hard worker. He eats, sleeps, drinks baseball since he’s probably been about 6 years old and he achieved the dream of playing Major League Baseball.”

Starter on opening day or not, Samardzija is definitely being counted on to be a leader in the clubhouse and help guide the Giants’ younger pitchers and bring them along.

Darvish: Astros should be stripped of '17 World Series title

Yu Darvish got hit hard by the Houston Astros during the 2017 World Series — both his ERA and reputation took quite a beating.

MESA, Ariz. — Theo Epstein claims there are "no hard feelings on either side" in the relationship between the Chicago Cubs and Kris Bryant.

Reynaldo Lopez saw the success Lucas Giolito had after adopting a more focused approach to pitching for the Chicago White Sox. He wants to find a similar solution.

GLENDALE, Ariz. — The rebuild may not be quite over yet but the Chicago White Sox hope the fun is already beginning.

Cubs 3B Bryant: No hard feelings on losing grievance

MESA, Ariz. — Cubs star Kris Bryant realized all along his service-time grievance against the team would be tough to win, and he still believe…

The Tampa Bay Rays' Mike Brosseau hits a single against the Oakland Athletics during the second inning Sunday in Oakland, Calif.

The Tampa Bay Rays' Mike Brosseau runs to first base on his single against the Oakland Athletics during the second inning.