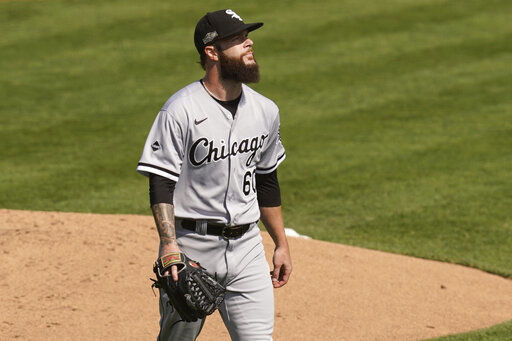 White Sox pitcher Dallas Keuchel walks to the dugout after retiring the Athletics during the first inning of Game 2 of an American League wild-card series on Wednesday in Oakland, California.

OAKLAND, Calif. — Oakland's long-reliable regulars Marcus Semien and Khris Davis powered a couple of home runs, Mark Canha made a game-saving catch against the wall and red-hot right-hander Chris Bassitt delivered the start of his life.

Now, the slugging A's are right back in a familiar fall position: one winner-take-all postseason game with the season on the line.

Semien and Davis connected early and Oakland's bullpen barely held off José Abreu and the Chicago White Sox late for a 5-3 win Wednesday that sent the AL playoff series to a deciding Game 3.

The A's lost in the AL wild-card game each of the past two seasons, providing added motivation to win the division and earn a longer series.

Game 3 is Thursday at the Coliseum.

“It feels good. We're hungry for more wins,” Semien said. “Tomorrow, anything can happen. It's just like Game 7."

A's reliever Jake Diekman walked home a run in the ninth, then retired the big-hitting Abreu on a sharp grounder to end it and even the best-of-three wild-card matchup at 1-all.

The White Sox went 14-0 in the regular season against left-handed starters and beat southpaw Jesús Luzardo in the playoff opener. A’s manager Bob Melvin acknowledged it might make him reconsider who to start with the season on the line — perhaps righty Mike Fiers over lefty Sean Manaea, an Andrean grad.

“I'm pretty sure we're pretty dang confident in anyone we throw against the White Sox,” Bassitt said. “The numbers don't mean anything. It's the postseason. I thought they put absurd at-bats against me, and I'm a righty."

Bassitt allowed one run on six hits in seven-plus innings during an impressive postseason debut as the AL West champion A's snapped a six-game postseason losing streak dating to 2013.

The right-hander, drafted by the White Sox before being traded to Oakland in December 2014, came in on a nice roll with an 0.34 ERA in September.

Things got interesting when Bassitt gave way to Liam Hendriks after a leadoff single to Tim Anderson in the eighth with a 5-0 lead. Yasmani Grandal hit a two-run homer one out later.

Hendriks surrendered a pair of two-out singles in the ninth and walked Yoán Moncada to load the bases. Diekman relieved and walked Grandal to bring home a run.

Abreu, a leading candidate for AL MVP, hit a hard grounder to second base as Diekman earned a tough save.

He couldn't hold down the slugging A's as Lucas Giolito did a day earlier taking a perfect game into the seventh inning of Chicago’s 4-1 Game 1 victory.

“The biggest thing is carry that momentum from the last inning into tomorrow’s game,” Madrigal said. “Even going into today’s game everyone felt good. We had some good innings just didn’t cash in. No one’s really worried, we know what we can do. We don’t have to overthink it, just go out there and play our game.”

Oakland’s six-game playoff skid matched the longest in A’s history — also done from Oct. 10, 2006-Oct. 7, 2012. This marked the club’s first postseason win since Game 3 of the 2013 AL Division Series, a 6-3 victory against Detroit at Comerica Park.

The A's lost the wild card game to the Yankees in 2018 then Tampa Bay last year after winning 97 games both seasons but finishing second to the rival Houston Astros.

“Hopefully that experience helps a little,” said Canha, whose leaping catch in the fifth robbed Anderson.

Davis, who led the majors with 48 home runs in 2018, cleared the fences for only the second time since Sept. 4 after playing in only 11 games down the stretch.

He went just 3 for 18 against the White Sox last season.

White Sox: LF Eloy Jiménez was out for a second straight playoff game as he nurses a sprained right foot that kept him out of the final three games of the regular season. Jiménez went through extensive baseball work Monday and still experienced soreness.

Jiménez was still receiving treatment to determine his status, with manager Rick Renteria noting he wasn't available as designated hitter because “you need to be able to run.”

“Right now he's about the same, no worse,” Renteria said. "Hopefully that can calm down a little bit more."

With another noon start, some of the A's chose to hit on the field after not doing so Tuesday — which was treated more like a day game after a night game. Melvin said many of his players didn't want to go two straight days without batting practice.

Both managers planned meetings with their staffs to determine who would take the mound.

Oakland kept six starting pitchers on the roster to have options for a deciding game.

“It's all hands on deck,” Renteria said, not providing specifics on who he might start. “TBA.”

White Sox look to future after playoff loss to Oakland

“It’s just the start of something. I think it was good for us to get in," shortstop Tim Anderson said. “Guys got a taste of it, and I think it’s just going to make them more hungry to get back there.”

“It’s a tough one to swallow but we've got to keep going,” Anderson said. “It’s just the start of something that could be great.”

White Sox pitcher Dallas Keuchel walks to the dugout after retiring the Athletics during the first inning of Game 2 of an American League wild-card series on Wednesday in Oakland, California.