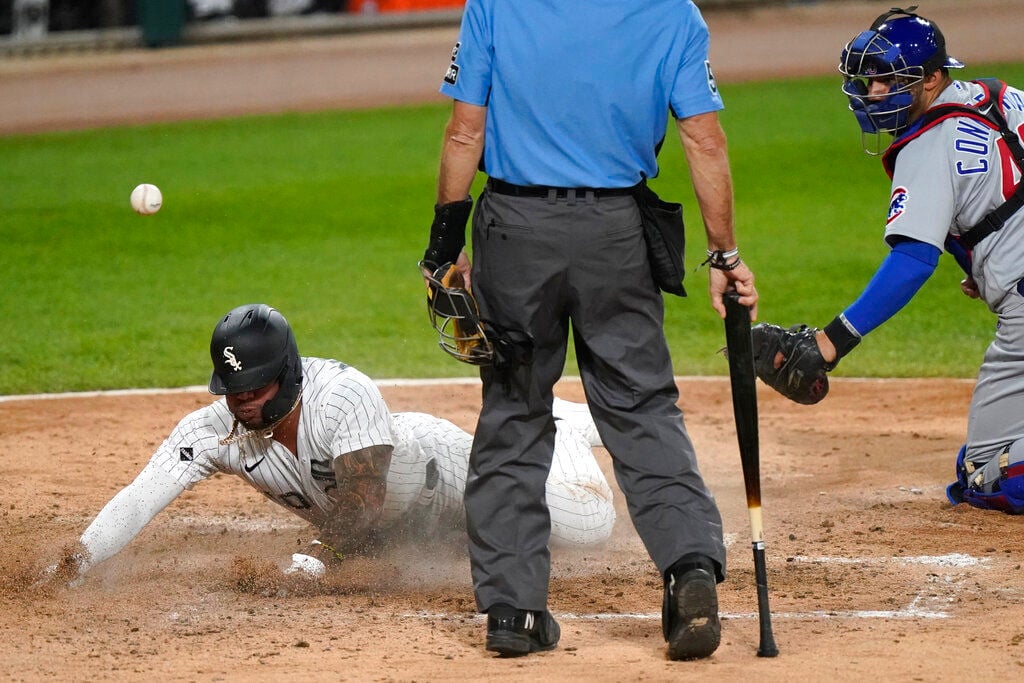 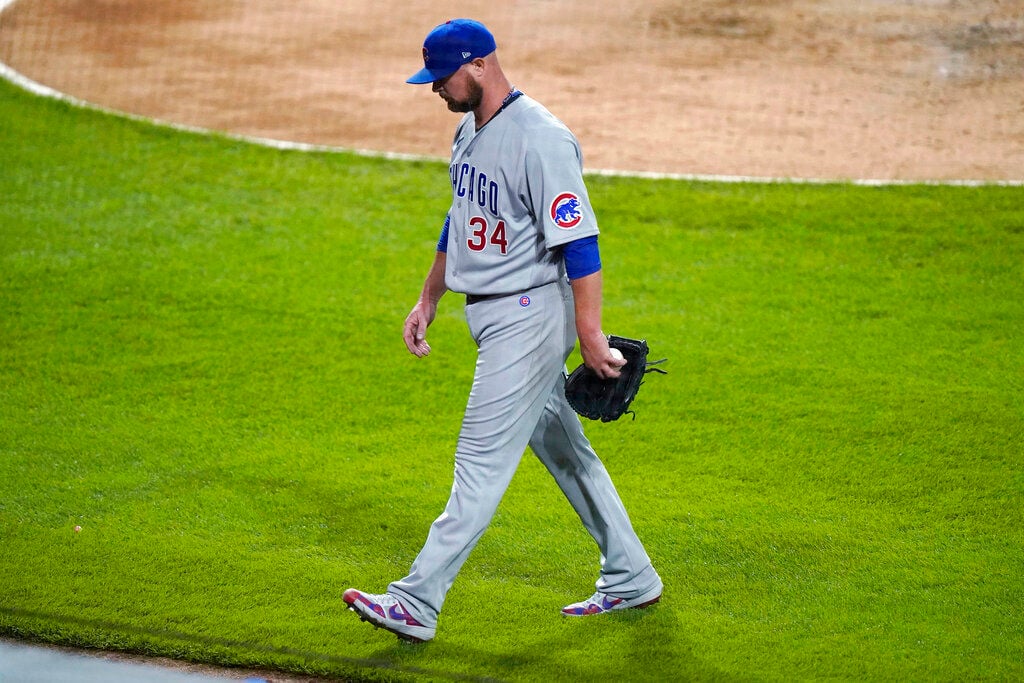 Chicago Cubs starting pitcher Jon Lester heads to the dugout after being pulled by manager David Ross during the fourth inning of the team's baseball game against the Chicago White Sox on Saturday in Chicago.

The Cubs clinched their third division title in five years when the St. Louis Cardinals lost 3-0 to Milwaukee.

The White Sox were on their way to a win they sorely needed by then and remained a game behind AL Central leader Minnesota, with the Twins beating Cincinnati. Chicago also took sole possession of second place, with Cleveland losing to Pittsburgh.

The White Sox need another victory Sunday over the Cubs and a Minnesota loss at home to Cincinnati to win the division title by virtue of the tiebreaker Chicago holds over the Twins.

Kris Bryant propelled the Cubs to a 5-2 lead, hitting a single and scoring in the second inning and launching his fifth career grand slam in the third — a long drive down the left-field line against rookie Dane Dunning.

But the South Siders took advantage of some shaky defense while chasing Jon Lester (3-3) in a five-run fourth. Abreu made it 7-5 when he greeted Ryan Tepera with a three-run double to left.

Moncada bumped the lead to four with his two-run drive against Jason Adam in the sixth. James McCann hit a solo homer in a two-run second, and five relievers combined to hold the Cubs to two hits after Dunning lasted just three innings.

The 25-year-old right-hander gave up five runs — four earned — and three hits. He walked three and hit a batter with a pitch.

Matt Foster (6-1) worked a perfect fourth and got the win.

Lester got tagged for seven runs in 3 2/3 innings and gave up six hits in another rough outing against the White Sox. The five-time All-Star gave up a season-high eight runs against them in a 10-1 loss at Wrigley Field on Aug. 21. And with his six-year, $155 million contract expiring, this could be his final regular-season start with the Cubs.

White Sox: OF Eloy Jiménez (sprained right foot) is "progressing positively" and the White Sox "remain optimistic" he will be ready for the start of the playoffs, manager Rick Renteria said. Jiménez, batting .296 with 14 homers and 41 RBIs, was out of the lineup for the second straight game after he was hurt sliding across home plate at Cleveland on Thursday.

“It’s a tough one to swallow but we've got to keep going,” Anderson said. “It’s just the start of something that could be great.”

Ramírez hit a three-run homer with two outs in the 10th inning, giving Cleveland a 5-3 win over the White Sox that clinched a postseason berth Tuesday night.

White Sox look to future after playoff loss to Oakland

“It’s just the start of something. I think it was good for us to get in," shortstop Tim Anderson said. “Guys got a taste of it, and I think it’s just going to make them more hungry to get back there.”

Rick Renteria had a 236-309 record in four seasons as manager of the White Sox.

Down 4-0, the White Sox, who had early chances against Civale, tied it with a two-out rally in the fifth on Abreu's two-run single and Eloy Jiménez's 14th homer.

Chicago Cubs starting pitcher Jon Lester heads to the dugout after being pulled by manager David Ross during the fourth inning of the team's baseball game against the Chicago White Sox on Saturday in Chicago.