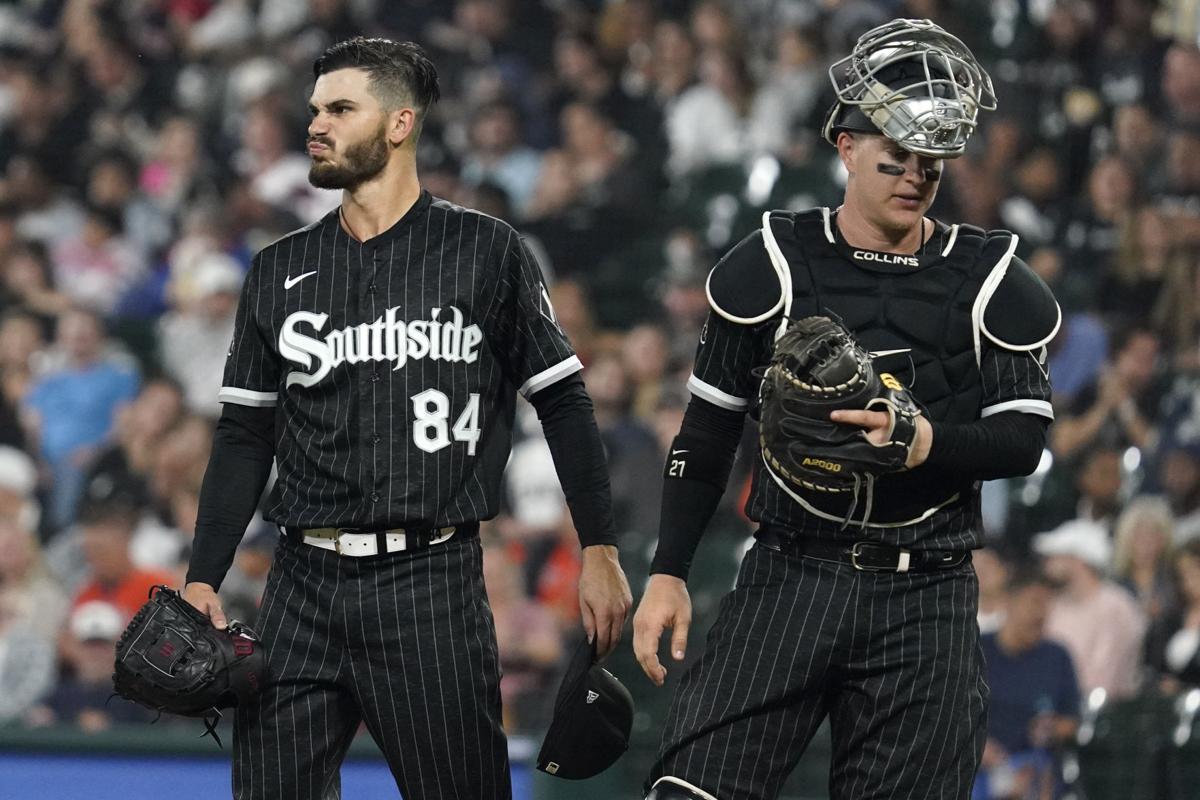 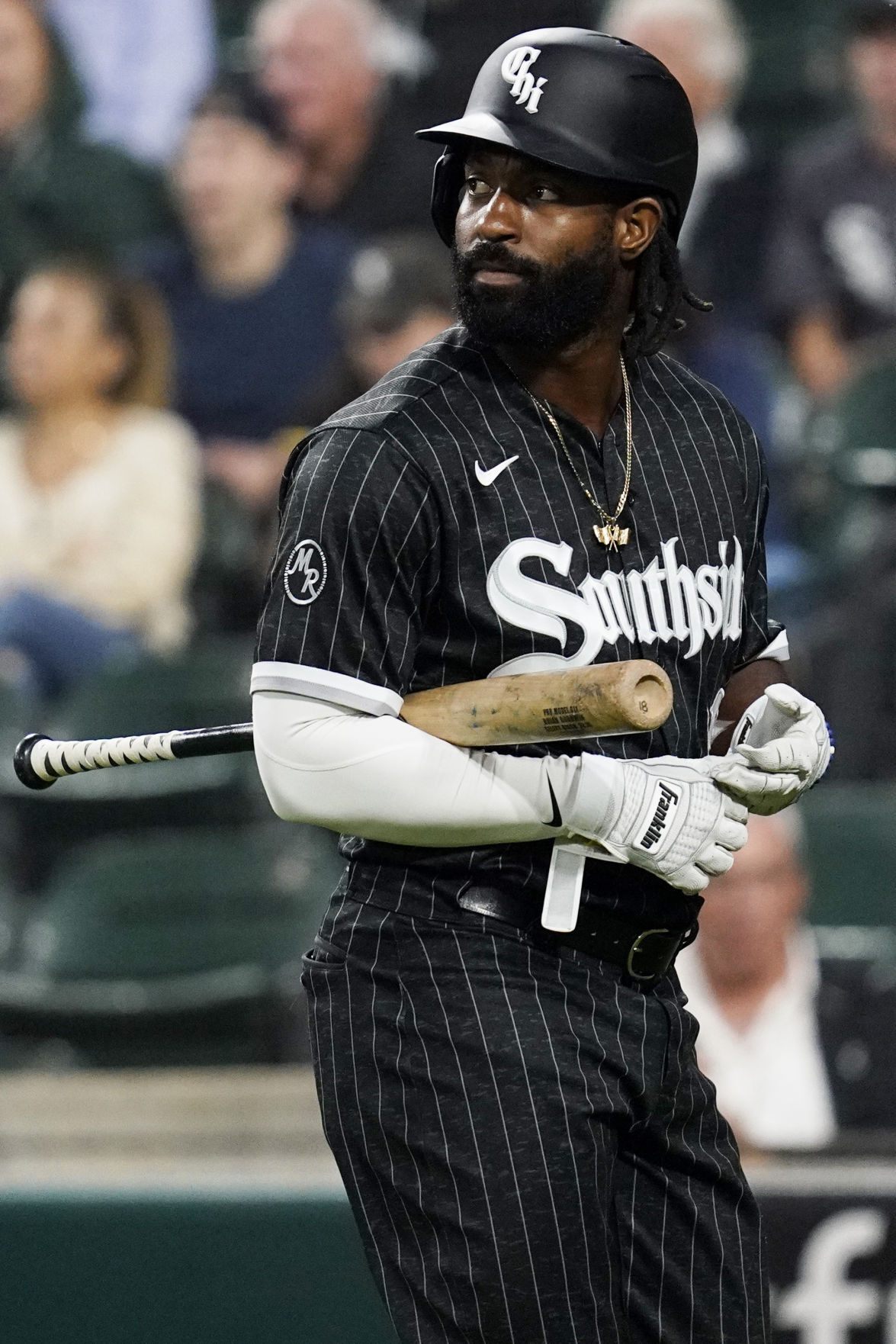 The White Sox's Brian Goodwin looks to the field after striking out swinging during the fourth inning Friday against the Houston Astros in Chicago.

CHICAGO — Lance McCullers Jr. pitched seven sparkling innings, and the Houston Astros beat the White Sox 7-1 on Friday night in the opener of a weekend series between AL division leaders.

Michael Brantley homered and Myles Straw drove in three runs as the Astros improved to a big league-best 43-22 against teams with a .500 or better record — including a 5-0 mark against the White Sox. Yuli Gurriel added three hits and two RBIs.

McCullers (7-2) surrendered hits on each of his first two pitches: a leadoff triple for Tim Anderson that extended his hitting streak to 13 games, and an RBI double for Yoán Moncada. But that was it for Chicago against the right-hander, who struck out 10 and walked two.

The White Sox won five in a row before the All-Star break, closing out a 6-3 road trip. But they were outplayed again by the Astros, who rolled to a four-game sweep in their first meeting of the season last month in Houston.

While the Astros have played well against baseball's best teams, the White Sox dropped to 16-25 against opponents that currently have a .500 or better record.

Dylan Cease (7-5) struck out 10 in 5 2/3 innings for Chicago. The right-hander permitted three runs and six hits in his first loss in nine home starts this season.

Cease caught a bad break when Anderson looked to second on Jose Altuve's two-out grounder to shortstop with a runner on first in the third. Second baseman Leury García wasn't on the bag and Altuve was credited with an infield single.

After Brantley was hit by a pitch, Gurriel lined a two-run double into right field.

Brantley added a two-out solo drive in the fifth, and the Astros broke it open with four more two-out runs in the seventh. Straw had the big blow, a three-run double to right that made it 7-1.

Bummer, 27, had been sidelined by a strained right hamstring. The left-hander is 1-4 with a 3.26 ERA and two saves in 32 games heading into Friday night's series opener against Houston.

López has been working as a starting pitcher, but he will work out of the bullpen with Chicago. The 27-year-old right-hander made five relief appearances in his first 92 big league games.

“He earned a spot. His velocity is up, making a lot of good pitches,” manager Tony La Russa said, “and he gives us some length in the bullpen.”

La Russa also said López could start one of the games in Monday's doubleheader against Minnesota.

The White Sox also announced that veteran utilityman Jake Lamb is going to Charlotte to begin a rehab assignment. Lamb, 30, is coming back from a strained right quadriceps.

The 28-year-old Fry opened this season on the IL after he had an offseason microdiscectomy. He made two appearances with the White Sox, allowing three runs in two innings.

Bummer, who had been sidelined by a strained right hamstring, recorded two outs in the seventh and was charged with four runs. López worked two scoreless innings.

Astros: All-Star SS Carlos Correa was activated from the injured list. Correa was placed on the IL last week due to health and safety protocols. ... RHP Austin Pruitt was activated from the 60-day IL. Pruitt was acquired in a January 2020 trade with Tampa Bay, but he missed last season with an elbow injury. ... Manager Dusty Baker said 3B Alex Bregman (strained left quadriceps) is progressing and could start a minor league rehabilitation stint soon. ... RHP Josh James (hip surgery) got two outs in a rehab appearance for Triple-A Sugar Land.

The White Sox's Brian Goodwin looks to the field after striking out swinging during the fourth inning Friday against the Houston Astros in Chicago.