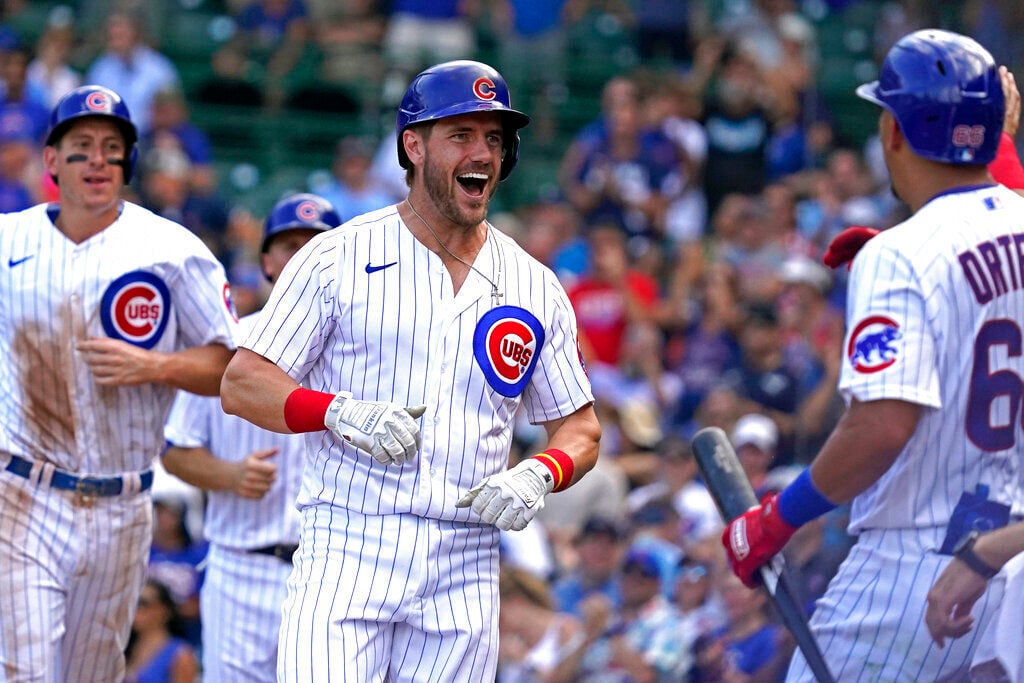 Chicago Cubs' Patrick Wisdom smiles as he runs to the dugout after hitting a three-run home run during the fifth inning in the first baseball game of a doubleheader against the Colorado Rockies on Wednesday in Chicago. 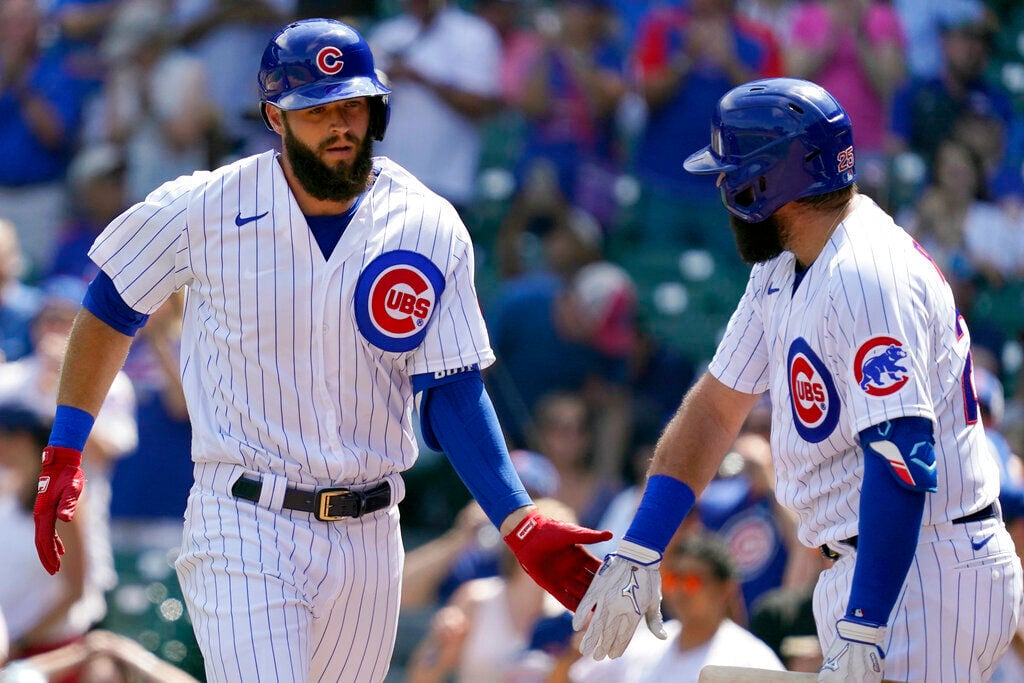 Chicago Cubs' David Bote, left, celebrates with Austin Romine after hitting a solo home run in the second inning in the first baseball game of a doubleheader against the Colorado Rockies on Wednesday in Chicago.

CHICAGO — Patrick Wisdom cracked a tiebreaking three-run homer in the fifth inning, and the Chicago Cubs beat the Colorado Rockies 5-2 in the first game of a doubleheader on Wednesday.

Wisdom launched a 1-1 slider from Austin Gomber over the left-field bleachers and onto Waveland Avenue for his 21st home run. He entered the year with four homers in 48 games over three seasons with the Cardinals, Rangers and Cubs.

Although he turns 30 on Friday, Wisdom still has rookie status. Cubs manager David Ross said Wisdom would get his vote for NL Rookie of the Year.

"I know Wiz is right there in the conversation," Ross said while also mentioning Cincinnati's Jonathan India. "If I really had to vote, I'd vote for my guy."

Wisdom struck out in his first two at-bats before taking Gomber deep.

"The third time you face a guy, you get a little more familiar with him," Ross said. "I think the power's real, 21 homers now. He knows he's going to punch out from time to time, but he works at it. He's doing a lot of good things at different moments."

"That's a guy in the lineup who can change the game," Davies said.

C.J. Cron hit his team-leading 22nd homer for the Rockies, who have lost three straight following a five-game winning streak.

Davies allowed two runs on three hits and struck out six in 4 2/3 innings. The wiry right-hander went 0-4 with an 8.25 ERA in his previous five starts.

Codi Heuer (5-2) got the next four outs for his first win as a Cub. Adam Morgan pitched a perfect seventh for his first save and second of his career.

Gomber (9-8) allowed five runs on five hits in 4 2/3 innings. The lefty struck out eight and walked one.

"I thought he was fine, but the fifth inning came back to bite him," Rockies manager Bud Black said.

The twinbill was scheduled after Tuesday night's game was rained out.

Cron homered to center off Davies' 3-0 sinker with one out in the second to give the Rockies a 1-0 lead. Bote went deep to left in the bottom half to tie it.

Brendan Rodgers singled in a run in the third to put the Rockies back ahead, 2-1.

Romine lined his first homer in 13 games this season down the left-field line to tie it in the fourth.

The Rockies recalled INF Joshua Fuentes from Triple-A Albuquerque as the 27th man for the second game of the doubleheader. The Cubs recalled RHP Jake Jewell from Triple-A Iowa.

Rockies: LF Connor Joe collided hard with CF Sam Hilliard and dropped to the ground after Joe caught Frank Schwindel's flyball in the first. Joe remained in the game after being checked by a trainer. He was back in the lineup in the leadoff spot for the second game. ... OF Raimel Tapia (toe sprain) will report to Triple-A Albuquerque this weekend for a rehab assignment and could return next week at Texas, Black said. Tapia has been on the 10-day injury list since Aug. 8.

Cubs: Ross doesn't know when C Willson Contreras (sprained right knee) will be back behind the plate, but the two-time All-Star could be in the lineup as a DH this weekend against the crosstown White Sox.

Marcus Stroman rushed to the airport and caught a flight from Los Angeles to Chicago as soon as he got the word from his agent.

The Northern League, which was known as the Midwest Collegiate League before its recent rebranding, announced on Thursday the addition of a Crown Point franchise.

Teams spend $1.4B in 1 day, then MLB locks out players

NEW YORK (AP) — Before getting locked out, players loaded up Wednesday as big league teams unlocked their coffers for an unprecedented spending spree.

PITTSBURGH (AP) — Mario Lemieux and Ron Burkle rescued the Pittsburgh Penguins out of bankruptcy more than 20 years ago, a decision that helped turn the team into one of the NHL's marquee franchises.

CHICAGO (AP) — Marcus Stroman rushed to the airport and caught a flight from Los Angeles to Chicago as soon as he got the word from his agent.

DETROIT (AP) — Javier Báez hopes he's a big part of a turnaround with the Detroit Tigers, too.

CLEVELAND (AP) — The Cleveland City Council voted Monday to approve a lease agreement that will keep the Guardians at Progressive Field through 2036.

Chicago Cubs' Patrick Wisdom smiles as he runs to the dugout after hitting a three-run home run during the fifth inning in the first baseball game of a doubleheader against the Colorado Rockies on Wednesday in Chicago.

Chicago Cubs' David Bote, left, celebrates with Austin Romine after hitting a solo home run in the second inning in the first baseball game of a doubleheader against the Colorado Rockies on Wednesday in Chicago.