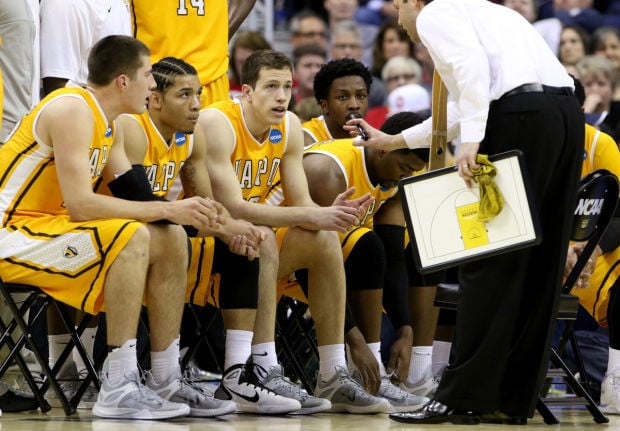 The Valparaiso men's basketball team listens to coach Bryce Drew during a time out in Maryland's 65-62 win in the NCAA tournament Friday in Columbus, Ohio. 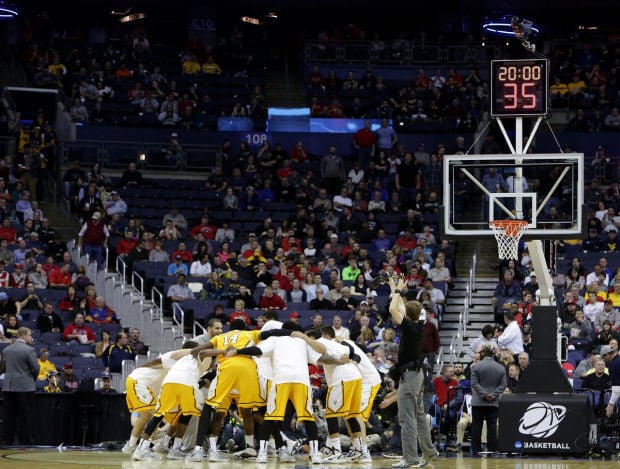 Valparaiso takes the court in Maryland's 65-62 win in the NCAA tournament Friday in Columbus, Ohio. 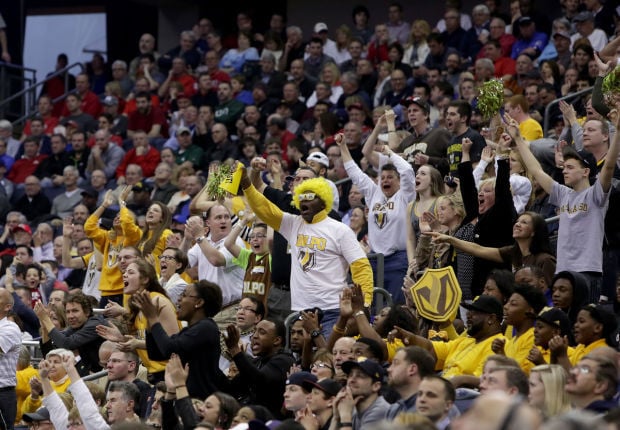 Valparaiso fans cheer on the team against Maryland in Maryland's 65-62 win in the NCAA tournament Friday in Columbus, Ohio.

COLUMBUS, Ohio | The painful loss was not yet an hour old and members of the Valparaiso men’s basketball team were already making their plans for the 2016 NCAA tournament.

“We know we’re going to be back here next year,” junior point guard Keith Carter said. “We’re going to work our tails off over the summer to not experience this feeling again.”

Carter was sidelined because of transfer requirements during Valparaiso’s 2013 tournament appearance against Michigan State, but he remembers the finality that came over the team following the game. Six seniors walked out of the Palace at Auburn Hills knowing they had just played their final game and come to the end of their collegiate journey.

Carter feels that Valparaiso’s journey is just beginning with a large contingent of the roster set to return next season.

“That’s big knowing that everyone is coming back,” Carter said. “Everybody hates to lose in this locker room. We’re going to work and work to get back here next year.”

The Crusaders lose Horizon League Defensive Player of the Year Vashil Fernandez to graduation along with reserve forward David Chadwick. It appears that the rest of the team will remain intact, but Valparaiso has lost a scholarship player to transfer every year dating back to 2003.

If the Crusaders are in fact in the NCAA tournament next year, the biggest question is whether or not Bryce Drew will be the one coaching the team. The two-time Horizon League Coach of the Year has a long-term contract with Valparaiso, but his name is consistently linked to other coaching positions. The buzz among national reporters in Columbus on Friday night was that Valparaiso’s strong showing against Maryland will do nothing to temper the hot stove.

Valparaiso’s players don’t live under a rock and they’re plenty aware of the hype that surrounds Drew. That doesn’t mean they expect their coach to leave anytime soon.

“He’s the coach at Valparaiso University. That’s his title and that’s what he is,” sophomore Alec Peters said. “There’s going to be rumors, but he’s the coach of this basketball team and that’s the bottom line.”

With much of the team expected to return this season, including 184 minutes of court time from Friday’s game, the Crusaders are expected to beef up their schedule in hopes to garner at-large consideration should Valparaiso fall in the Horizon League tournament.

“We talk about that with Coach (Drew) all the time, letting him know we want to play (bigger schools),” Carter said.”He tells us it’s hard to schedule and we know that. There isn’t anything we can do about that.”

Regardless of Friday’s result, the Crusaders got plenty of good experience in the NCAA tournament. It took Drew’s teams three years to get a win in the tournament when he was a player and this season’s team is setup to be together for another two years.

“We know that we have a bright future here with being one of the youngest teams in the tournament,” Peters said. “At the same time we’re going to miss two tremendous seniors that you can never replace.”

COLUMBUS, OHIO | The Valparaiso men’s basketball team walked into Nationwide Arena on Friday afternoon wanting to prove that it belonged on th…

The Valparaiso men's basketball team listens to coach Bryce Drew during a time out in Maryland's 65-62 win in the NCAA tournament Friday in Columbus, Ohio.

Valparaiso takes the court in Maryland's 65-62 win in the NCAA tournament Friday in Columbus, Ohio.

Valparaiso fans cheer on the team against Maryland in Maryland's 65-62 win in the NCAA tournament Friday in Columbus, Ohio.