Purdue fails at free-throw line late, loses in OT
Share this
1 of 2 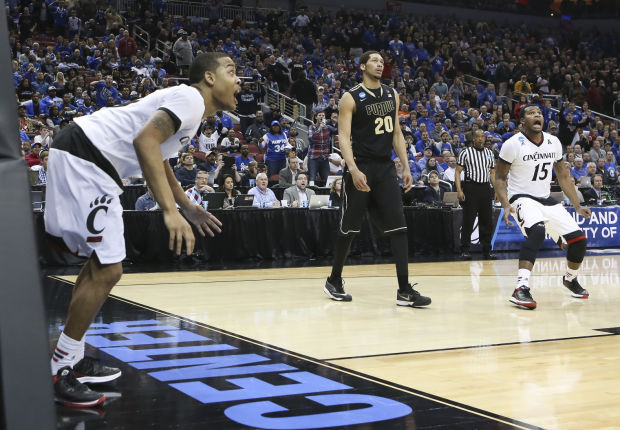 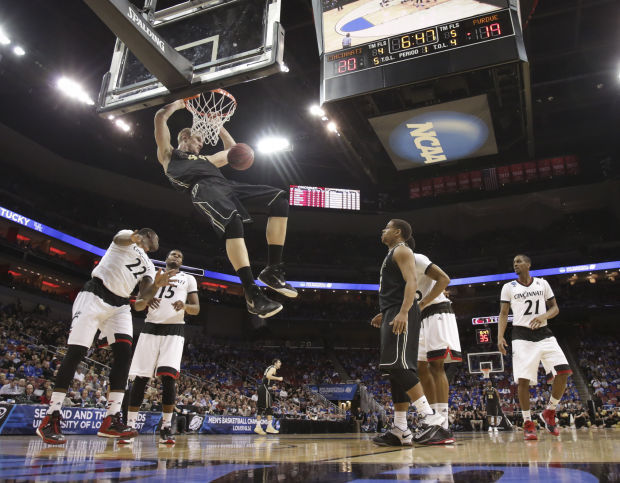 Purdue center Isaac Haas dunks during the first half against Cincinnati in Louisville, Ky., on Thursday.

LOUISVILLE, Ky. | Troy Caupain got Cincinnati to overtime with his buzzer-beating layup, then Coreontae DeBerry helped the eighth-seeded Bearcats beat Purdue 66-65 Thursday night in their opening game in the NCAA Tournament.

The Bearcats trailed by seven with 48.5 seconds left in regulation and forced overtime with a 10-3 run. Caupain's driving layup banked off the glass, rolled around and hit the glass again — staying on the back rim for a moment — before falling through. That sent the Bearcats celebrating while officials reviewed the play to make sure Caupain did beat the buzzer.

In overtime, DeBerry scored four of his 13 points helping Cincinnati take a lead it wouldn't lose again as the Bearcats outscored Purdue 7-6 in the extra time.

Vince Edwards' would-be tying 3 hit off the rim at the buzzer for the Boilermakers (21-13).

The Bearcats (23-10) will play either No. 1 Kentucky or Hampton on Saturday in the Midwest Region. Farad Cobb led Cincinnati with 14 points.

Cincinnati won for the sixth time in seven games and also won their NCAA opener for the first time since 2012 after Purdue failed to put away the game leading 59-46 on a pair of free throws by Jon Octeus.

But when Octeus hit only one of two free throws with 7.4 seconds left, Caupain drove to the basket to force overtime. Caupain crouched underneath the basket briefly waiting for officials to rule he beat the buzzer.

Purdue snapped a 14-game winning streak in its NCAA openers. The Boilermakers last led 63-61 on a dunk by A.J. Hammons with 3:48 left. They didn't score again until Octeus' layup with 7 seconds left. Caupain missed a free throw, allowing Purdue one final chance that didn't go down to force another overtime.

Hammons finished with 17 points for Purdue, and Edwards had 14.

This was destined to be a defensive showdown with Cincinnati sixth nationally allowing 55.3 points a game and Purdue having led the Big Ten holding opponents to 39.3 percent shooting. The tight game had 16 lead changes.

Purdue center Isaac Haas dunks during the first half against Cincinnati in Louisville, Ky., on Thursday.