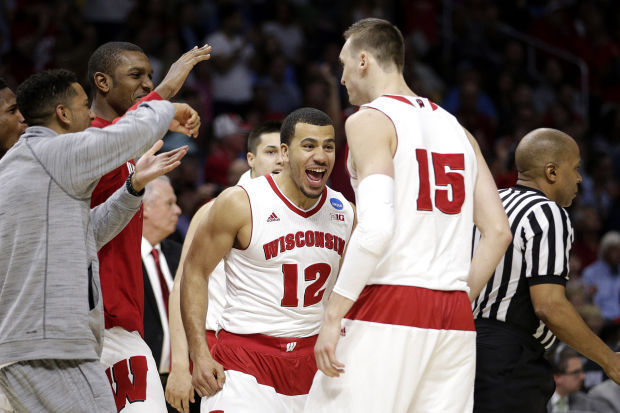 Wisconsin forward Sam Dekker is greeted by guard Traevon Jackson and teammates at the bench during the second half of Thursday's regional semifinal against North Carolina in the NCAA tournament in Los Angeles. 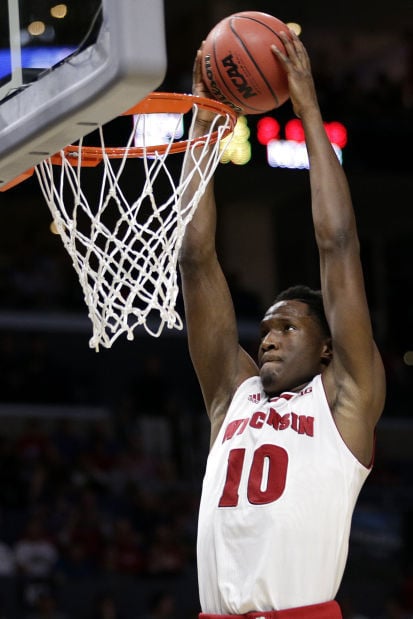 Wisconsin forward Nigel Hayes dunks against North Carolina during the second half of a regional semifinal in the NCAA tournament on Thursday in Los Angeles.

LOS ANGELES | Sam Dekker scored a career-high 23 points, Frank Kaminsky added 19 and top-seeded Wisconsin rallied in the final 10 minutes to hold off North Carolina 79-72 Thursday night and advance to the final eight of the NCAA tournament.

Zak Showalter came off the bench to score six points in the Badgers' 19-7 comeback run that sent them into the West Regional final Saturday against either No. 2 seed Arizona or sixth-seeded Xavier.

Brice Johnson and Justin Jackson scored 15 points each for the fourth-seeded Tar Heels (26-12), who got within one with 4:21 remaining but couldn't retake the lead they owned for much of the second half.

Marcus Paige hit consecutive 3-pointers that drew Carolina within one with 54 seconds to go, but Wisconsin (34-3) made all eight of its free throws — four by Kaminsky — over the closing seconds.

The teams shot exactly the same — 46 percent — for the game, but the Badgers improved to 58 percent in the second half and made 20 of 23 free throws to keep their hopes of a second straight Final Four berth alive.

The Tar Heels were trying to reach a regional final for the first time since back-to-back appearances in 2011 and '12. They appeared to have the game in hand when they were up by seven and Kaminsky went down with his hands covering his eyes.

Turns out "Frank the Tank" was just getting his team revved up.

With Kaminsky on the bench, his right eye reddened after being hit by Isaiah Hicks, the Badgers launched the 19-7 run that put them back in front, 65-60. Kaminsky quickly returned to hit a 3-pointer, and Showalter scored four straight, including a layup off his own steal, putting the red-clad Wisconsin fans in full-throated cheers.

Carolina's Kennedy Meeks returned from a sprained left knee last weekend to bother Kaminsky early before getting in foul trouble.

Trailing by one, the Tar Heels outscored the Badgers 14-6 to take their largest lead, 53-46. Berry and Hicks had four apiece while the Badgers struggled to make a shot.

Kaminsky got hit in the eye by Hicks on his layup that ended Carolina's run. He covered his face, but eventually got up and played the rest of the game with an eye that was open even less than his usual sleepy appearance.

Dekker carried the Badgers offensively with 15 points in the first half, including a layup that just beat the buzzer to pull Wisconsin within 33-31, just the sixth time the Badgers trailed at the break this season. Carolina threw a trio of big bodies on Kaminsky, with Meeks, Jackson and Joel James keeping the lanky 7-footer tied up. He had four points and five rebounds.

Neither team led by more than five points in the first half, when Carolina shot 50 percent.

Dekker sparked an 8-0 run by twice driving into the heart of Carolina's defense and scoring to give Wisconsin a 25-20 lead. Carolina closed the half by outscoring the Badgers 13-6 and holding them to 1 of 9 field goals down the stretch.

Frank Kaminsky had 19 points for the Badgers.

Wisconsin forward Sam Dekker is greeted by guard Traevon Jackson and teammates at the bench during the second half of Thursday's regional semifinal against North Carolina in the NCAA tournament in Los Angeles.

Wisconsin forward Nigel Hayes dunks against North Carolina during the second half of a regional semifinal in the NCAA tournament on Thursday in Los Angeles.