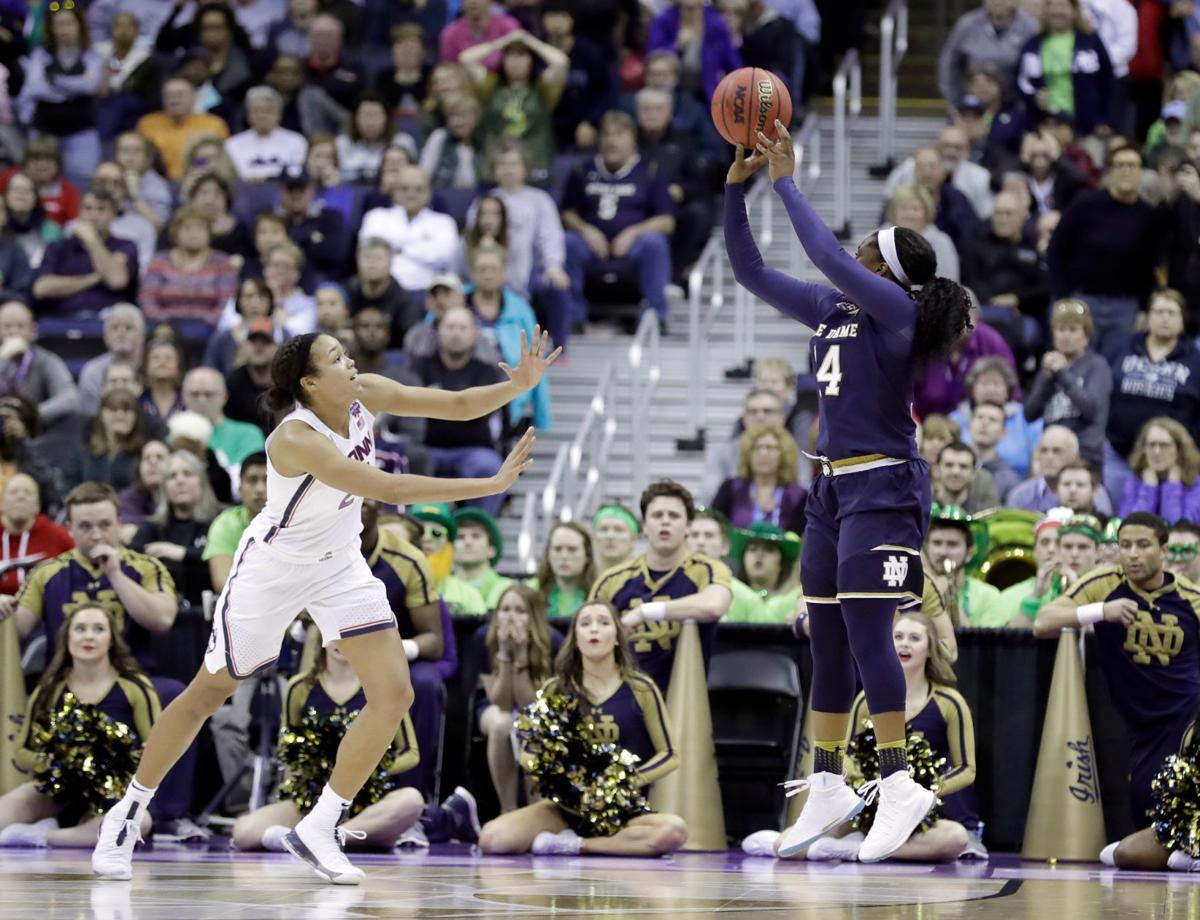 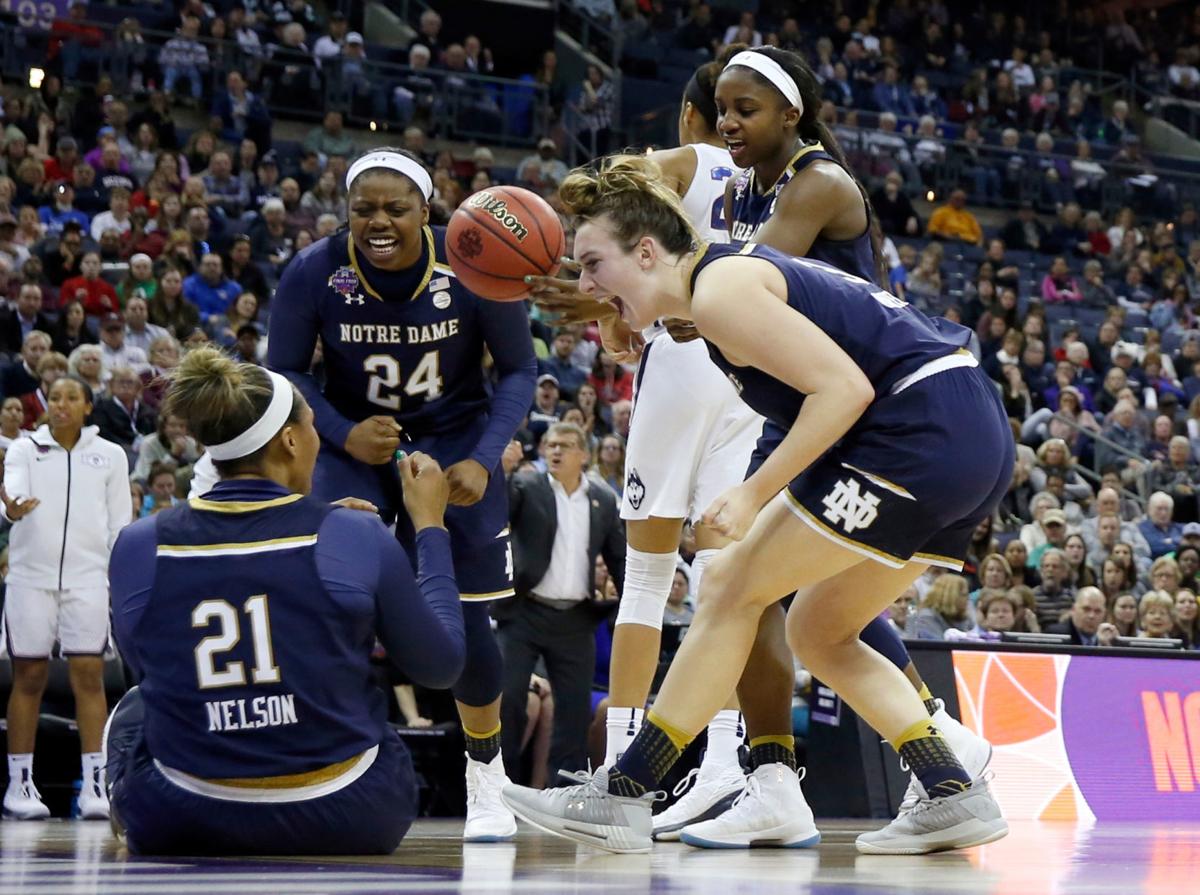 Notre Dame's Kristina Nelson (21) celebrates with teammates after taking a charging foul during the second half against Connecticut in the national semifinals Friday in Columbus, Ohio.

COLUMBUS, Ohio — Notre Dame's Arike Ogunbowale swished her jumper with a second left and jumped to celebrate. In one joyous moment, she knew exactly how Mississippi State's Morgan William felt one year earlier.

It's an incredible feeling to beat the best in overtime.

And now, the teams that are already part of Final Four lore for pulling off the big upsets of UConn will play each other for a title of their own.

Ogunbowale hit a jumper from just inside the arc with a second left — nothing but net in the clutch — for a 91-89 overtime victory over previously unbeaten UConn in the women's semifinals on Friday night. The Fighting Irish (34-3) will play for their second national title on Sunday after years of being denied by the Huskies.

"I mean, this one's really special," coach Muffet McGraw said. "It's got to be the best one."

They're facing a kindred spirit.

Mississippi State (37-1) ended UConn's record streak of 111 wins last year on a last-second shot by William in the semifinals. The Bulldogs then lost to South Carolina in the title game. They got back there by rallying to knock off Louisville 73-63 in overtime in the first semifinal on Friday.

"I don't have the words, y'all, for when this is over," coach Vic Schaefer said.

It's not over yet for the Fighting Irish and the Bulldogs.

For UConn? Another stunning exit.

"For a long time, we made it look like it was easy," coach Geno Auriemma said. "But it's very, very difficult, as it's played out the last two years."

This women's NCAA tournament followed form all the way to the Final Four, with the top four teams all advancing. They turned the semifinals into an extravaganza of comebacks and improbable shots. It was the first time in NCAA tournament history that both games went to OT.

First, it was the Bulldogs' turn against Louisville, a team that had reached the Final Four twice and lost to UConn both times — part of the Huskies' run of six titles in eight years. Roshunda Johnson's 3-pointer with 5.7 seconds left in the fourth quarter sent it to overtime, and Mississippi State pulled away behind center Teaira McCowan, who had 21 points and a Final Four-record 25 rebounds — more than half the Bulldogs' total of 46.

She played all 45 minutes and got the better of whoever Louisville put in her way.

"They were subbing them out, so I didn't really know who I had," she said. "So I guess I was wearing them pretty good."

That loss in the title game last year became one of their biggest inspirations to get back to the Final Four and finish it off.

"It drives us," McCowan said.

The Fighting Irish know that disappointment, too. They won their only national title in 2001 and have settled for runner-up four times in the last seven years — 2011, 2012, 2014 and 2015. The last two came against UConn, which won a championship game between unbeaten teams in 2014 and had won eight straight in their rivalry.

The most recent UConn win was 80-71 on Dec. 3, when the Huskies overcame a 12-point deficit — their biggest this season. The Fighting Irish got up by 13 in the first quarter on Friday night, let it slip away again, and then wasted a five-point lead in the last 21 seconds in the fourth quarter.

Notre Dame is a most improbable team to reach the title game. The Irish lost four players to ACL injuries during the season, leaving them with only seven healthy scholarship players. They rallied from second-half deficits in their last three games to reach the final one.

"I didn't think we'd have more ACL tears than losses," McGraw said. "I think it's just an amazing accomplishment for this team and the resilience they've shown all year."

COLUMBUS, Ohio — It took a historic comeback and an epic shot to give Notre Dame its second national championship.

Notre Dame's Kristina Nelson (21) celebrates with teammates after taking a charging foul during the second half against Connecticut in the national semifinals Friday in Columbus, Ohio.