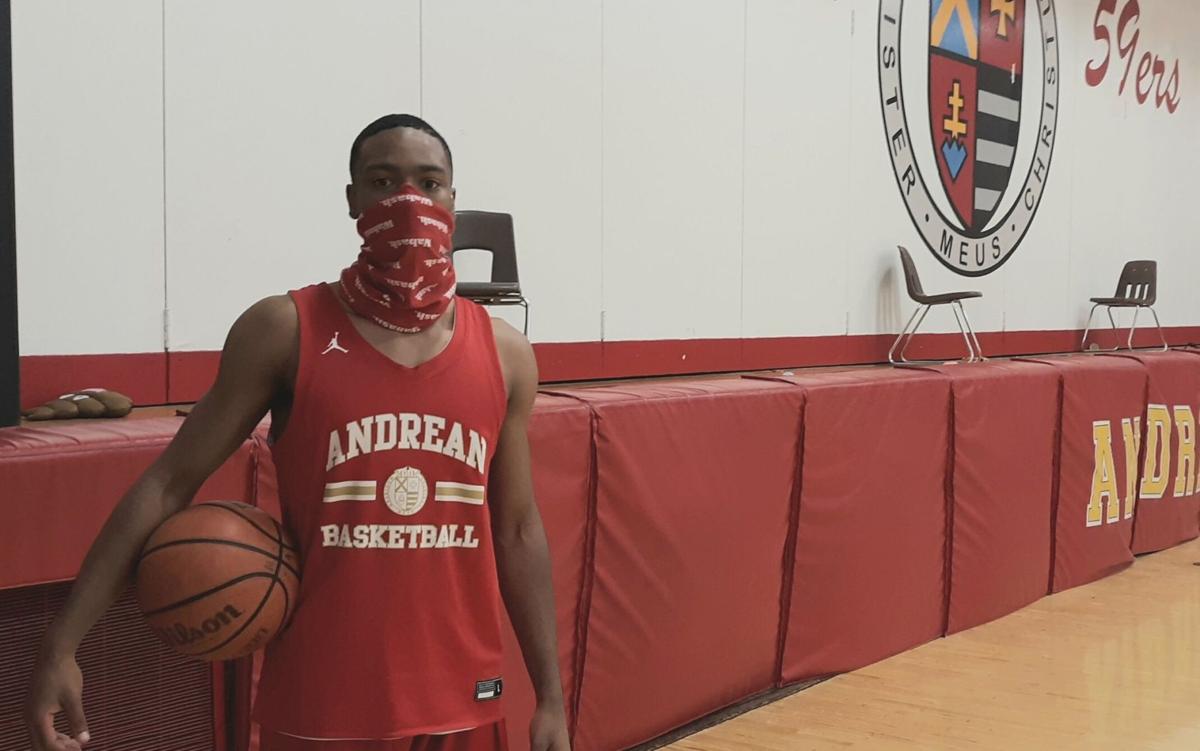 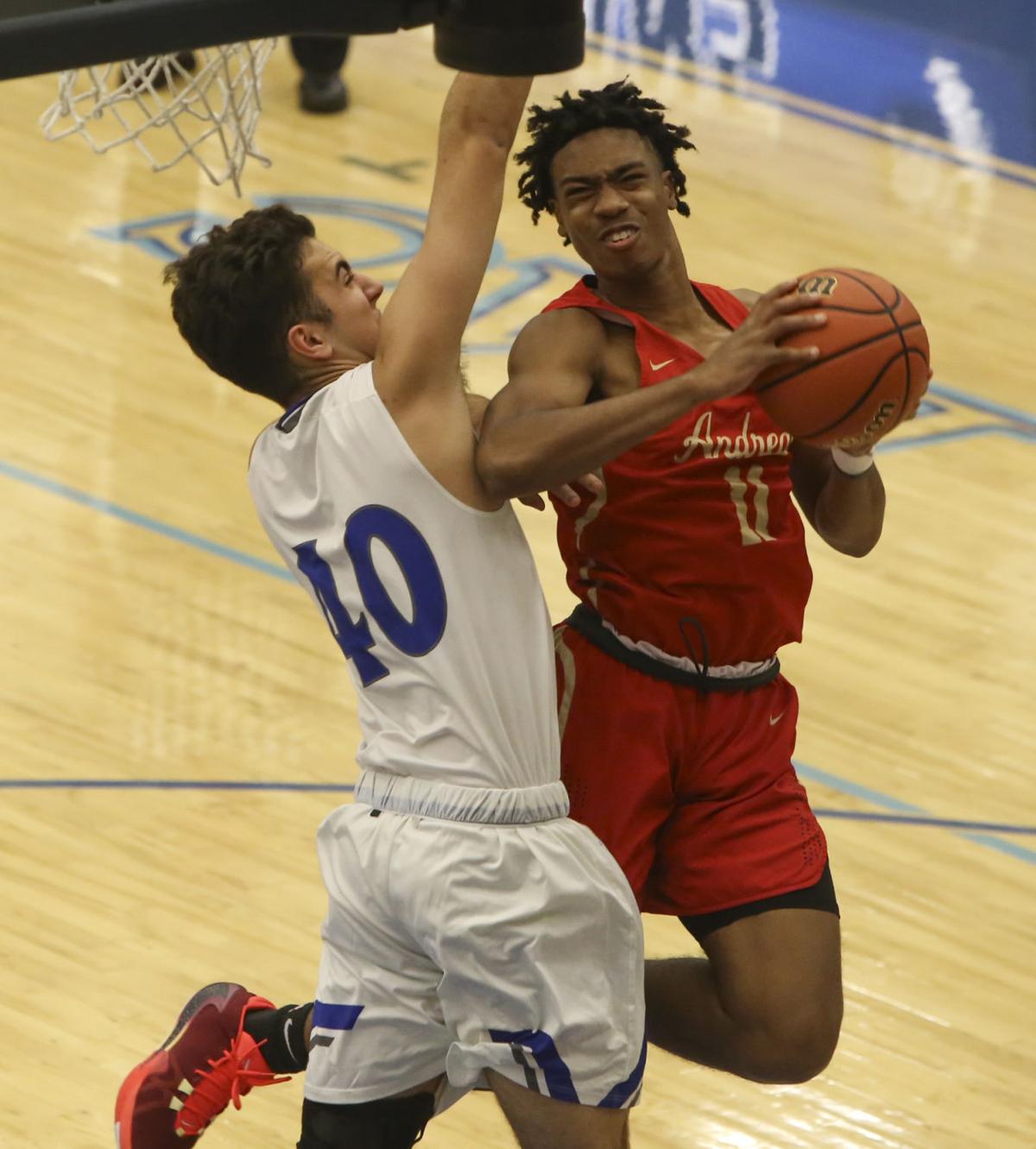 Andrean’s BJ Jones drives against Lake Central during a game in 2019.

MERRILLVILLE — BJ Jones is the kind of player some coaches call a “program builder.”

“He doesn’t get too upset about things and doesn’t get too excited about things. He stays pretty even keel, and he’s great for us to have in this program for all the young guys,” Andrean coach Brad Stangel said. “If they work like Ben Jones, they’re going to have a chance to play excellent basketball.”

Jones says his role is as a leader and to distribute the basketball. The 59ers senior is all over the stat sheet. As a juinor, he was second on the team with 12.2 points per game, third with 4.4 rebounds, fourth with 1.1 steals and he paced Andrean with 2.2 assists per game. Guarding the perimeter may have been the priority, though.

“I help my teammates. When they’re down I pick them up,” Jones said. “I feel like when we need certain plays to be made, I can go make those plays.”

This season, he’ll be asked to score a little more, Stangel said. A big part of that will be improving his consistency as a shooter.

Jones had the team’s most 3-point shot attempts last year but only made 21% of them. There were games like the win over West Side when he made four of six, but also like the loss to Chesterton when hit one of 11.

He believes it was partly a concentration issue. The transfer early last year of Kyle Ross to Lake Central left him in a scoring role for which he wasn’t quite mentally ready.

“It’s just being more confident in myself,” Jones said. “This year, I’m coming in more confident and I know that I have to score for us to win games.”

To that end, Jones spent a lot of time in the gym getting up shots over the summer. He made some slight adjustments to his form.

“He’s gotten better each and every year and I expect a big year from him,” Stangel said. “He’s worked hard. He’s put the time in.”

The mid-range jumper that’s become a less popular shot in the game, in general, is where Jones makes his biggest impact. He’s also athletic enough to get to the rim. Stangel said if the outside shot becomes more reliable for Jones, it will open things up even more.

He’s seen interest from some mid major Division I schools, along with several Division II and III programs. He’s been in “solid contact” with Franklin College and Wabash, he said.

The 59ers have a few goals to accomplish before Jones leaves, though.

Andrean is an experienced group that believes it knows how to win. Several players own championship rings from 2019, led by the senior trio of Jones, Nicky Flesher and Deshon Burnett. The group learned a few more lessons in a disappointing 11th grade campaign.

“Sophomore year, there was a lot of adversity but last year there was way more. We learned how to fight through that adversity and stay positive,” Jones said. “I think it really paid off for this year. The goal is obviously to try to do what we did two years ago.”

“I know my role is a 3-point specialist, but it doesn’t matter if I’m playing 40 minutes a game or not (playing) at all,” Jackson said.

“What a privilege it was to have Tommy Lasorda associated with Valparaiso University,” Drew said. “He was the ambassador for baseball and he was an ambassador for life.”

TOM KEEGAN: Tommy Lasorda a 'shoe'-in as best manager ever

Tom Keegan covered the Dodgers, managed by late Hall of Famer Tommy Lasorda, on a daily basis in 1988 and 1989.

“I’ll space out,” Bakker said. “My brain will just kind of disassociate when I’m under pressure and I won’t realize I’m racing until it’s almost over."

'We took four steps back': Merrillville coach Amy Govert not satisfied with win at Chesterton

"We didn't do well in not one category. We expect much more out of them. Our caliber of play is better than what we showed (Friday). We're not happy."

“I’ve just been down on myself for a little while,” the returning state qualifier said. “I was just trying to get a break.”

Andrean’s BJ Jones drives against Lake Central during a game in 2019.