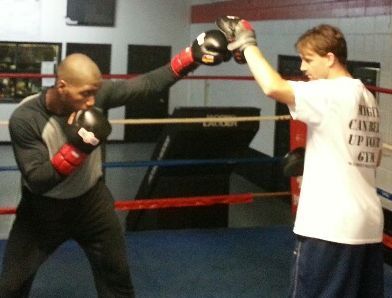 Cedric "L.O.W." Agnew, left, trains for his upcoming fight against light-heavyweight champion Sergey Kovalev. Orginally from Chicago, Agnew has been training in Houston for the past two years. 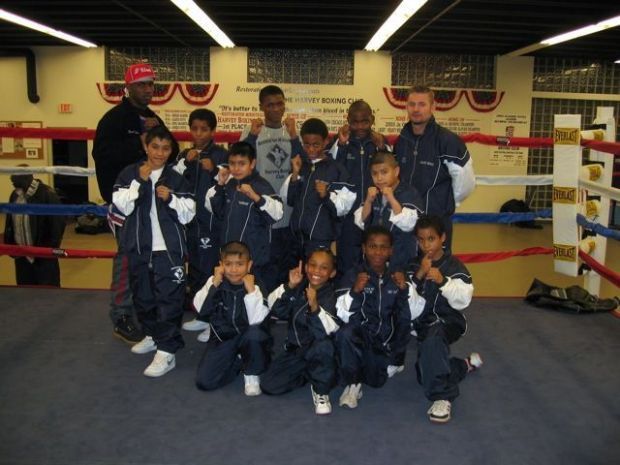 Cedric Agnew, back row, far left, was among the first group of fighters that trained at the Restoration Ministries Harvey Boxing Club, which was founded in 2002.

Cedric Agnew's next opponent is not only dangerous, he's deadly.

Only two fighters have breached the seventh round against Sergey "Krusher" Kovalev. Only one is around to tell about it.

Roman Simakov, who at the time (Dec. 5, 2011) rivaled Kovalev for the distinction of being Russia's top light heavyweight, sustained a brutal seventh-round TKO beating from Kovalev before slipping into a coma and dying several days later.

Agnew, 27, of Chicago, will challenge Kovalev for the WBO light heavyweight championship in the main event of HBO's "Boxing After Dark" on March 29 in Atlantic City.

"I know what happened, but that can happen in any fight," Agnew said of the tragedy. "Each time you step in the ring, there's always a chance it will be your last.

"It's just one of those things that happen in the sport. And it doesn't have to be from a guy who hits like Mike Tyson. Even fighters with less punching power are dangerous if they're professionals. You've just got to be prepared and go in there with a positive attitude."

It's been reported that several contenders have been avoiding the undefeated Kovalev (23-0-1, 21 knockouts). When Agnew was offered a title shot at him, it was like a belated Christmas gift.

"It's finally here ... I finally got the call I was waiting for," said Agnew, who is undefeated himself (26-0, 13 knockouts). "I was able to beat the quality of opponents I needed to put me in this position."

Agnew is currently ranked 16th in the world, and is one of only three Top 20 boxers in the weight class with an unblemished record.

Kovalev's draw against Grover Young was due to an accidental foul that prevented Young from continuing.

Agnew has been boxing since he was 8 years old. He was among the original stable of amateur fighters representing the Restoration Ministries' Harvey Boxing Club when it opened in 2002.

Another fighter from that group, Alex Martin, has also turned professional and is undefeated (4-0, four knockouts) in the welterweight division.

After a stellar amateur career that included several national and Junior Olympic championships, Agnew went pro in 2007 and quickly compiled an 11-0 record in a little more than two years.

Agnew did feast on inexperienced and below-.500 fighters while building up his resume, but as of late has upped his credability with wins over Daniel Judah and Otis Griffin to respectively attain and defend the WBC United States light heavyweight title. In his last fight, April 13, 2013, Agnew earned a convincing unanimous decision over Yusaf Mack for the USBA light heavyweight title.

For the past two years, Agnew has been training out of Houston under the tutelage of Bobby Benton.

"The weather is a lot better year-round, and I feel I can get a lot more done down here," Agnew said.

In a sport where slights are often magnified for motivation's sake, you can't help but wonder what Agnew thinks about all the talk regarding Kovalev's next fight, a would-be unification bout against WBC light heavyweight champion Adonis Stevenson.

"I don't pay much attention to that stuff," said Agnew who, like Kovalev, will be making his main-event debut on HBO. "All I know is that I'm completely focused on this fight."

Cedric "L.O.W." Agnew, left, trains for his upcoming fight against light-heavyweight champion Sergey Kovalev. Orginally from Chicago, Agnew has been training in Houston for the past two years.

Cedric Agnew, back row, far left, was among the first group of fighters that trained at the Restoration Ministries Harvey Boxing Club, which was founded in 2002.