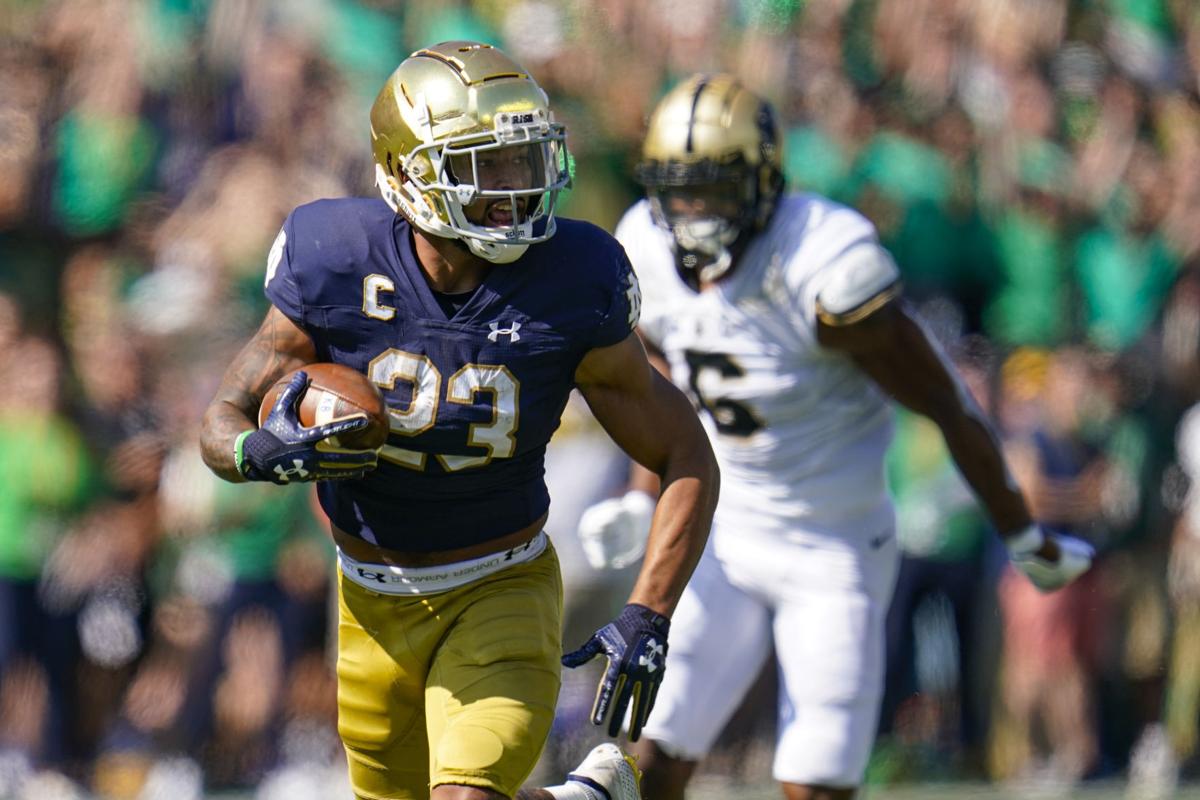 Notre Dame running back Kyren Williams (23) runs in for a touchdown in front of Purdue linebacker Jalen Graham (6) during the first half of Saturday's game. 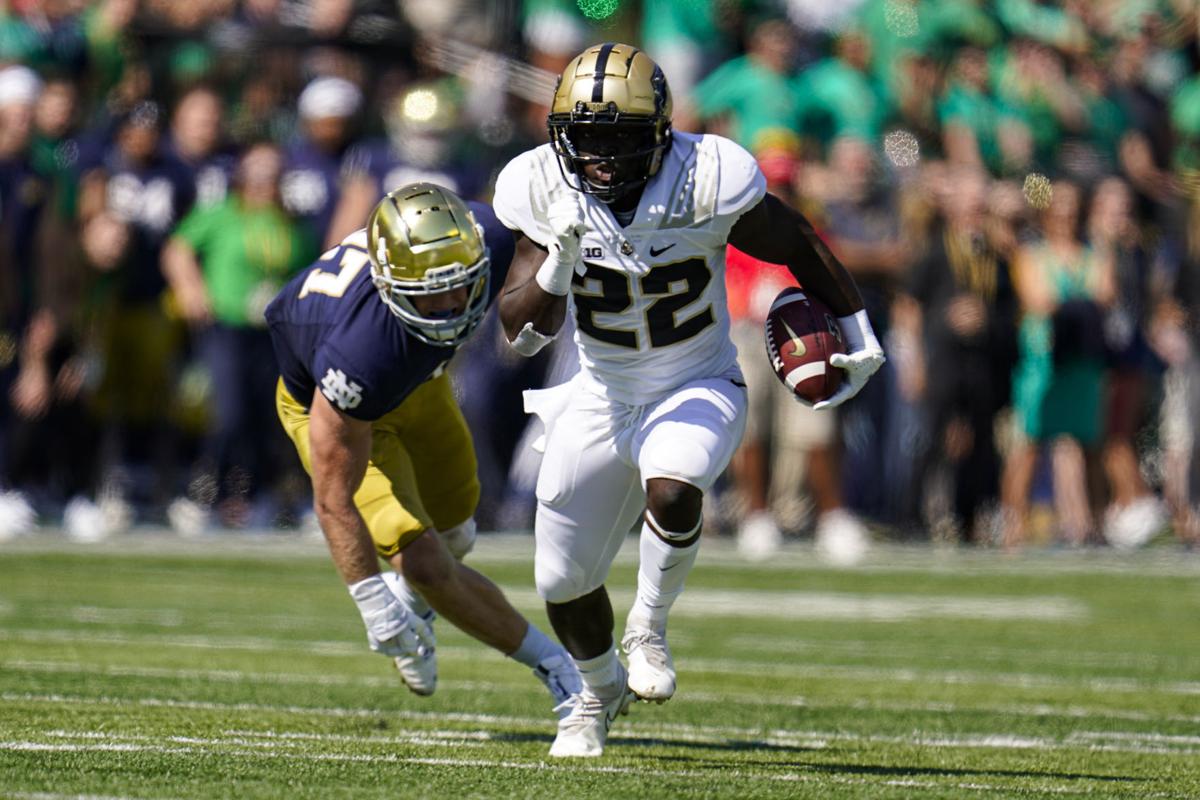 Purdue running back King Doerue (22) runs past Notre Dame linebacker JD Bertrand (27) during the first half of Sunday's game.

SOUTH BEND — No. 12 Notre Dame got big three big plays from two of its offensive captains and helped coach Brian Kelly match Knute Rockne for the most victories in program history.

Kyren Williams scored two long touchdowns, the second a 51-yard run with 6:05 remaining, and Avery Davis scored on a 62-yard reception as the Fighting Irish beat Purdue 27-13 and improved to 3-0.

Victory No. 105 for Kelly in his 12-year career at Notre Dame was also the 26th straight for the Irish at home. The Fighting Irish won their eighth straight over Purdue and first since 2014.

"It takes a lot of things to be in place for that to happen," said Kelly, whose first victory at Notre Dame was a 23-12 victory over Purdue at Notre Dame during the 2010 season. "Father John (Jenkins, the university president) and (athletic director) Jack (Swarbrick) have been on this journey. Consistency, leadership and alignment — all those things have to come together to get to this point."

Williams, who scored on a fourth-and-3 pass play of 39 yards from Jack Coan early in the second quarter to give the Irish their first lead 7-3, finished with 86 yards on 11 carries and two receptions for 47 yards.

Davis, who had five receptions for 120 yards in the game, had a field view of Williams' game-clinching TD run.

"He's insane, his ability to maneuver, his strength to stay up," Davis said of Williams. "Just watching him for a second, I forgot I had to block for him. He's so entertaining."

Kelly, whose team had struggled in victories over Florida State (41-38 in overtime) and Toledo (32-29), was glad the play did after an intense week of practice for coach Jeff Brohm's Boilermakers (2-1).

"I liked the way our guys prepared this week," Kelly said. "Our level of preparation rose and so did our performance. It wasn't the best by any means. But we developed some players today. They got grittier."

Coan, who was sacked four times and struggled with his accuracy, completed 15 of 31 for 223 yards and two touchdowns. His TD pass to Davis in the third quarter put the Irish up 17-6.

"I thought we did a good job in the first half, kept them in check, got to the quarterback," Purdue coach Jeff Brohm said. "The second half, they made some adjustments and we gave up some big plays."

The Boilermakers outgained the Irish 348-343 thanks to a 291-223 edge through the air and got their only touchdown on a 2-yard pass from Jack Plummer to Milton Wright in the third quarter that cut the Irish lead to 17-13.

Plummer completed 25 of 36 passes for 187 yards but left the game after being sacked by Notre Dame's Isaiah Foskey and Myron Tagovailoa-Amosa. He was replaced by Aidan O'Connell, who threw for 104 yards, but with 2:32 remaining was picked off by Kyle Hamilton in the Irish end zone.

"We feel like we got two guys and multiple guys who can play for us," Brohm said. "We're not going to hesitate to play (multiple) guys."

Notes: The Purdue Marching Band performed at halftime inside Notre Dame Stadium without its big bass drum, which Notre Dame did not allow onto the field because the tunnel where Notre Dame enters is reserved for the Fighting Irish and their band. The Purdue band used a formation to resemble their absent bass drum, which remained outside the stadium. The bass drum, which is celebrating its 100th anniversary this season, missed its first game since 1979. ... For the second straight week, the Irish used freshman quarterback Tyler Buchner, who is more elusive than Coan. Buchner gained 24 yards on three rushes and was 0 for 1 passing.

It is unclear when the team will announce the hire.

Running is a family affair for Illiana Christian's Olthof cousins

Illiana Christian coaches should probably be looking for a few more Olthofs.

Notre Dame running back Kyren Williams (23) runs in for a touchdown in front of Purdue linebacker Jalen Graham (6) during the first half of Saturday's game.

Purdue running back King Doerue (22) runs past Notre Dame linebacker JD Bertrand (27) during the first half of Sunday's game.