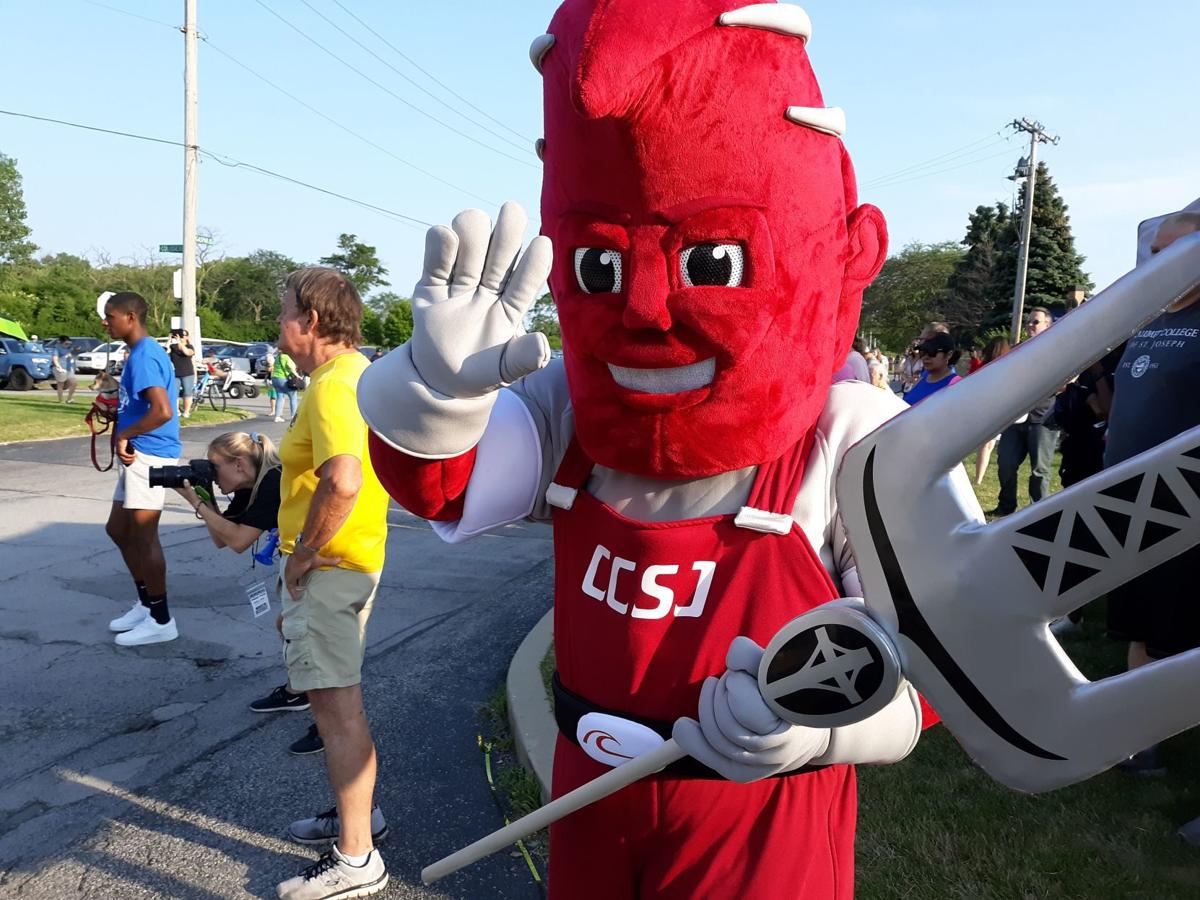 Calumet College of St. Joseph unveiled its new mascot, Crimson Joe, before the Pierogi 5K Stumble in Whiting Thursday. The mascot waived to runners as they started the race. 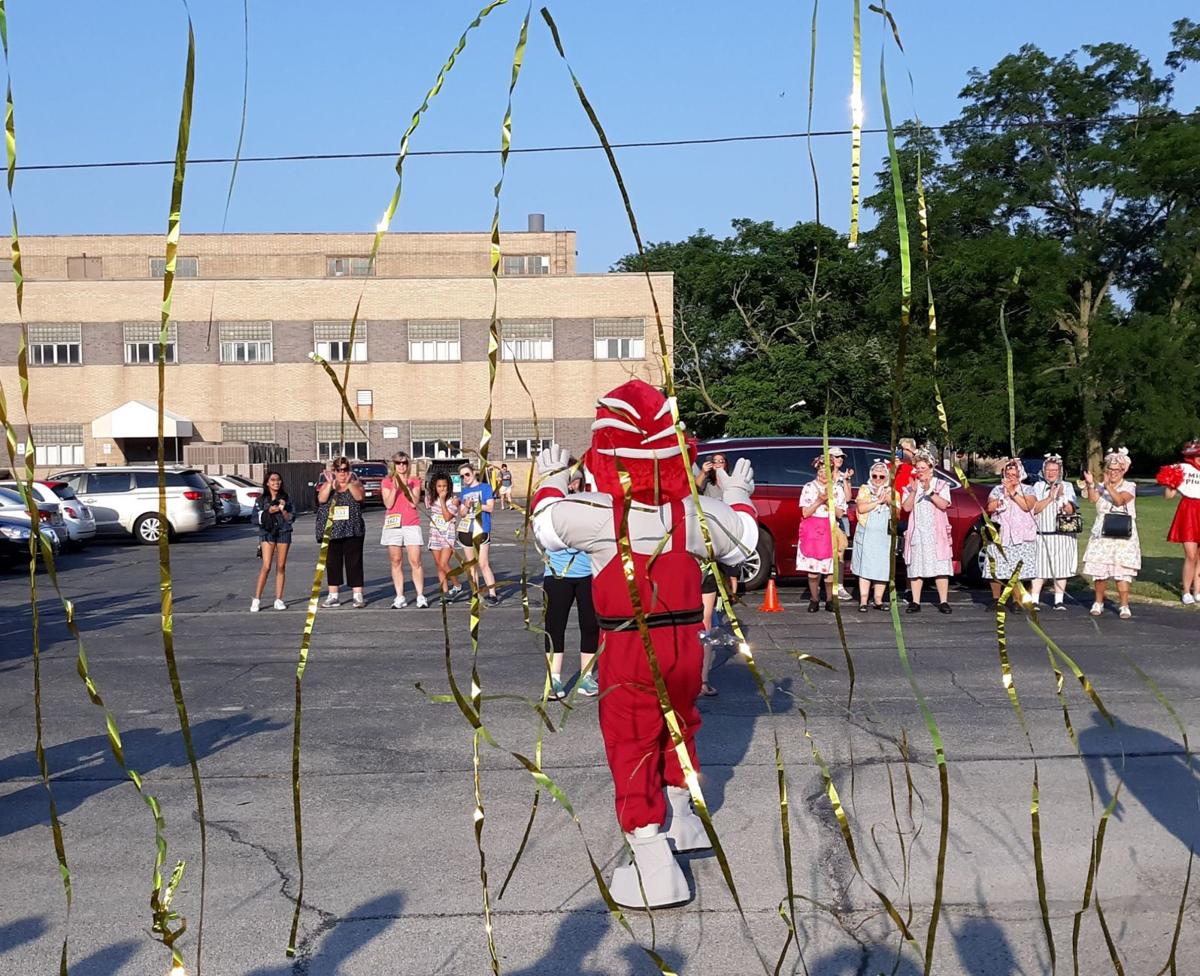 Crimson Joe is introduced under gold streamers as the Pierogi Fest babushkas watch. Calumet College of St. Joseph's new mascot has been in the works for about a year.

WHITING — Crimson Joe's red head crested under gold streamers as he ran out of the tent and met the public for the first time.

Calumet College unveiled its new mascot at the start of the Pierogi 5K Stumble Thursday. Calumet College of St. Joseph President Amy McCormack introduced Joe to the runners and he waved to them as the race began.

“All of our students are hard-working. Many of them are working a second job or working full-time and coming here at night,” CCSJ Public Relations Director Linda Gajewski said. “We wanted it to tie into the Region. We had classes in Hammond, we moved to East Chicago and now we’re here (in Whiting).”

A committee of students, staff, faculty and alumni was formed about a year ago to come up with an outline for Joe and his character traits. They talked with David Raymond, the original Phillie Phanatic, and other representatives from the Mascot Hall of Fame.

Students submitted forms about what CCSJ meant to them. Faculty provided feedback. A consensus was formed.

“Crimson Joe is a representative of who we are, who the Region is and the hard-working people of northwest Indiana,” the school’s Director of Enrollment Management Andy Marks said.

Raymond’s company, Raymond Entertainment, designed Crimson Joe when the committee was ready. Renderings were emailed to the school and a back and forth resulted in the Crimson Joe on display Thursday.

“We took pieces. We liked this belt of maybe those hands,” Gajewski said. “They were very, very different and you could just see that was the one that fit us.”

The idea of a Crimson Wave mascot has been around for a while, Marks said, but the opening of the Mascot Hall of Fame about a mile from the Calumet College campus accelerated the process. Whiting Mayor Joe Stahura wanted the school to be part of mascot events.

The person in Crimson Joe will remain anonymous. Interviews were held, dances were danced and a temporary person was chosen to look though giant eyes. At some point in the future, a student will occupy the costume.

Joe will be at Crimson Wave athletic and community events, starting with the Pierogi Fest this weekend. He’ll be on the children’s stage with Reggie the Party Dude from the Mascot Hall of Fame.

“Our goal is to have him just like anybody else, your Purdue Pete or any other mascot,” Marks said. “That’s your face, everybody recognizes it and associates it with you.”

Voting underway for 2020 class of National Mascot Hall of Fame

Public voting is underway for the next round of mascots to enter the hallowed and furry halls of the National Mascot Hall of Fame in Whiting.

Indiana's first-ever high school mascot was a well-known cartoon character from the silent film era at the beginning of the 20th century.

Calumet College of St. Joseph unveiled its new mascot, Crimson Joe, before the Pierogi 5K Stumble in Whiting Thursday. The mascot waived to runners as they started the race.

Crimson Joe is introduced under gold streamers as the Pierogi Fest babushkas watch. Calumet College of St. Joseph's new mascot has been in the works for about a year.