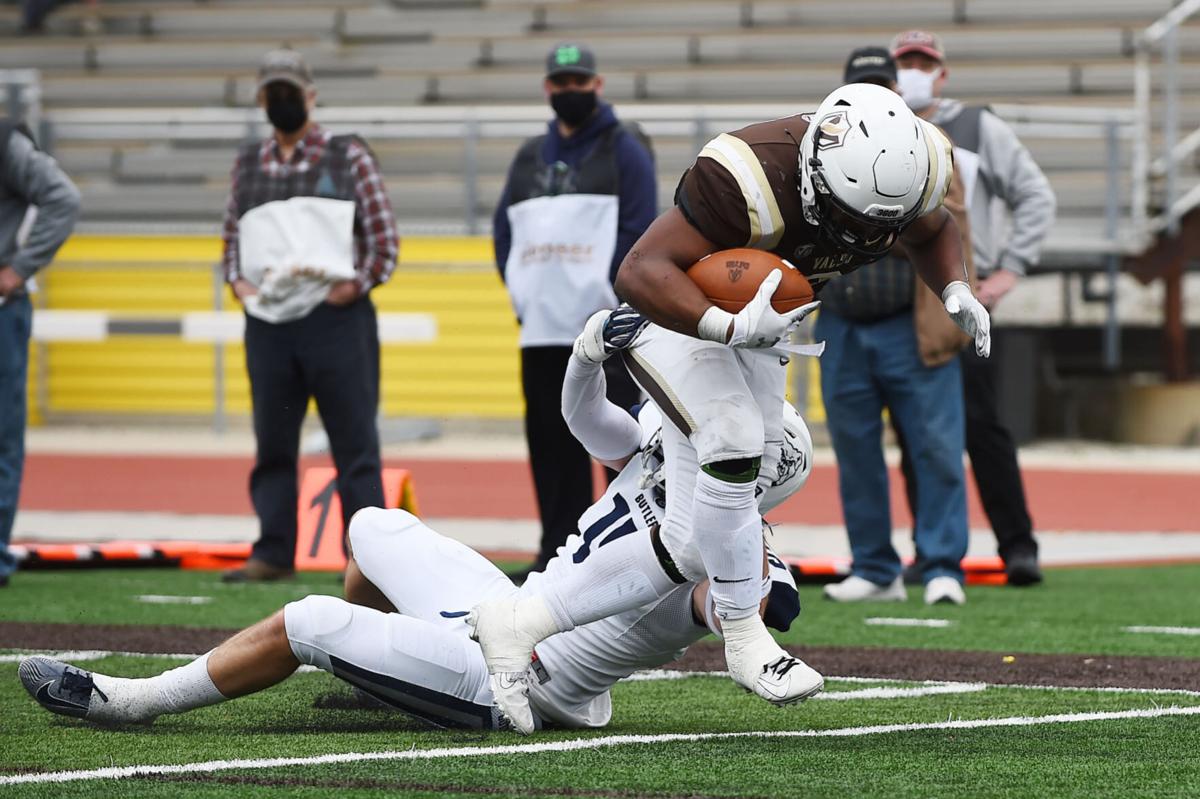 Valparaiso’s Robert Washington sheds a tackle attempt from Butler’s Malachi Pikeon Saturday and scores a touchdown in the fourth quarter at Brown Field. 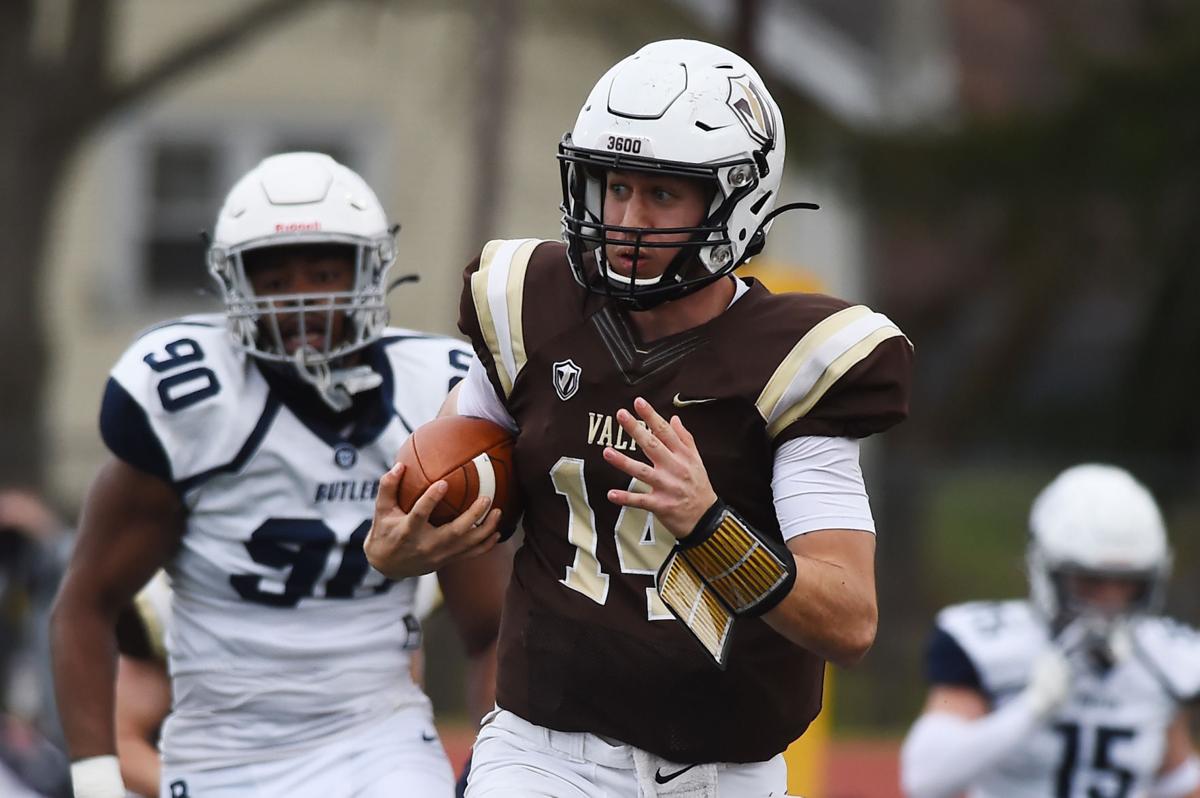 Valparaiso quarterback Chris Duncan runs for yardage in the third quarter against Butler on Saturday at Brown Field. 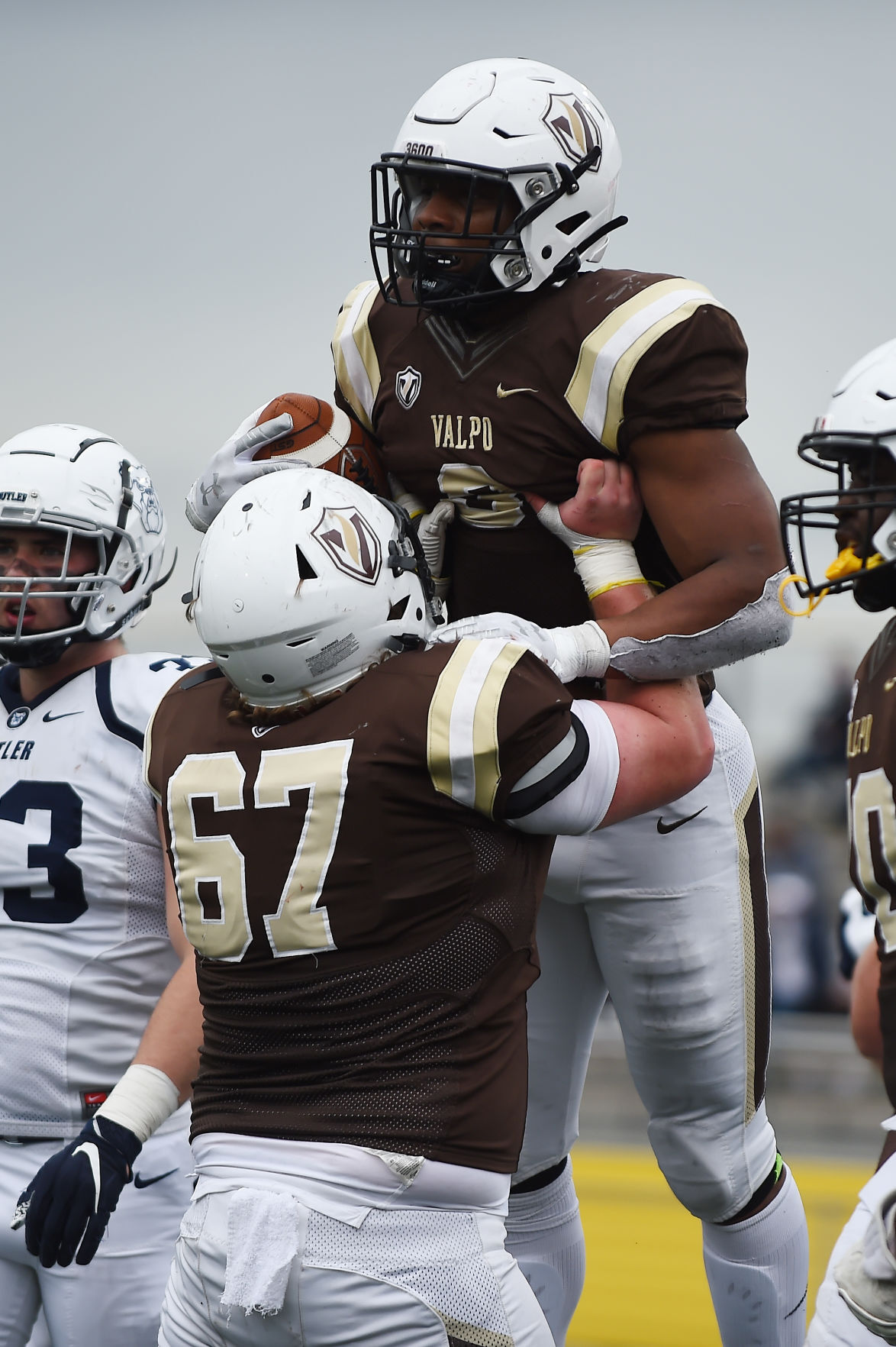 As Duncan snapped the ball in the victory formation for the final play of Valparaiso’s 28-25 win over Butler, a handful of former Valparaiso football players sprinted from the stands toward Brown Field. Duncan met them at the fence and the joyous group began belting out the Valpo fight song while lifting the Hoosier Helmet traveling trophy high in the air.

“That was a really special moment for me,” Duncan said. “At the end of the game, singing the fight song with them. I hugged every single alumni that was there. They were saying ‘this is your moment; this is your thing.’ They were so happy for me.”

Duncan is the lone fifth-year senior on the roster that has spent his entire career with Valparaiso. Saturday’s game was one of the reasons why he came back for a fifth season and battled through a COVID delay that pushed his final collegiate season to the spring. The quarterback ran for 94 yards and added a passing touchdown to Robert Washington early in the fourth quarter that gave Valparaiso (2-1) the lead for good.

“This is one of the main reasons I came back, to play this game, to play them twice and to get two wins,” Duncan said. “It makes my career. It’s incredible.”

Duncan improved to 4-2 against Butler and the fifth-year senior has made key contributions in all four of the victories. While Washington was playing in just his second game against the Bulldogs, he is now no stranger to a rivalry that he didn’t even know about before he transferred to Valparaiso from Old Dominion this year.

Washington ran for 199 yards in the season-opening win against Butler on Mar. 13 and he followed up that performance with 120 rushing yards on Saturday as well as three straight touchdowns that turned a 17-7 deficit into a 28-17 lead.

Duncan and Washington combined for 214 rushing yards, but their biggest play came early in the fourth quarter when Duncan connected with Washington on a 9-yard touchdown pass. Facing a key third down, Duncan dumped the ball to Washington out of the backfield and the junior running back made the first Butler defender miss before capitalizing on excellent blocking from Valparaiso’s receivers.

“They were loading the box and I said to the offensive staff that we should throw the bubble out to Robert,” Valparaiso coach Landon Fox said. “We wanted to get him out in space and with his ability to make people miss, I felt comfortable with the play.”

Saturday’s victory marked Valparaiso’s fourth win over Butler in the last five meetings as well as the first time one team has beat the other twice in one season. The two Indiana programs have met every season since 1951.

“It is something that we talked about all week,” Fox said. “Sixty minutes is a short period of time for a lifetime of memories. It’s a big deal. We’ll never shy away from this game being of the utmost importance in this program.”

Valparaiso trailed at the end of the first three quarters and struggled to get into an offensive rhythm for much of the game. After Washington’s touchdown reception gave Valpo the lead, the defense delivered two takeaways that helped add to the lead and helped Valparaiso bleed down the clock. Butler added a late touchdown and two-point conversion, but Valpo recovered the onside kick to ice the victory.

“We didn’t play our best today and every guy in the program knows it,” Fox said. “But we found a way to win. That was a program win. Maybe it wasn’t our best day, but how good can you be on a bad day?”

Landon Fox is the first to admit that he doesn’t do a good job of handling uncertainty.

“It was nothing about what they did,” Reese said. “It was all about us.”

Instead of going to a prospective kid’s high school or AAU practice, Facetime has become the norm. Instead of bringing a player to campus for an official visit, it’s now a Zoom call.

“I don’t ever despise small beginnings,” Robert Washington said. “I love being part of this program where we can come together and make history."

“I caught it, I swear,”  Braden Contreras said. “My mind was going a million miles an hour. I just kept yelling ‘I caught it, I caught it.’ I definitely got a foot down.”

Valparaiso’s Robert Washington sheds a tackle attempt from Butler’s Malachi Pikeon Saturday and scores a touchdown in the fourth quarter at Brown Field.

Valparaiso quarterback Chris Duncan runs for yardage in the third quarter against Butler on Saturday at Brown Field.