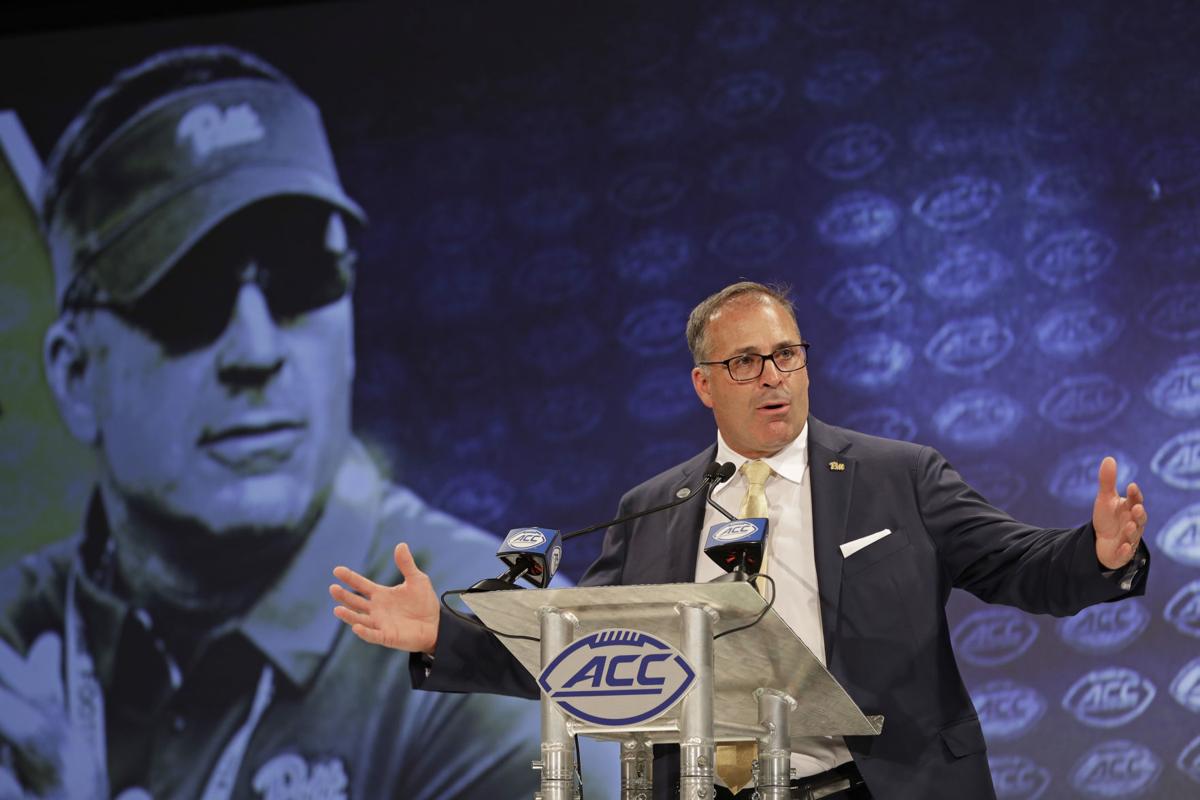 Pittsburgh football coach Pat Narduzzi, who is pictured at the Atlantic Coast Conference media day Wednesday in Charlotte, North Carolina, said his defense could be improved because plenty of starters return. 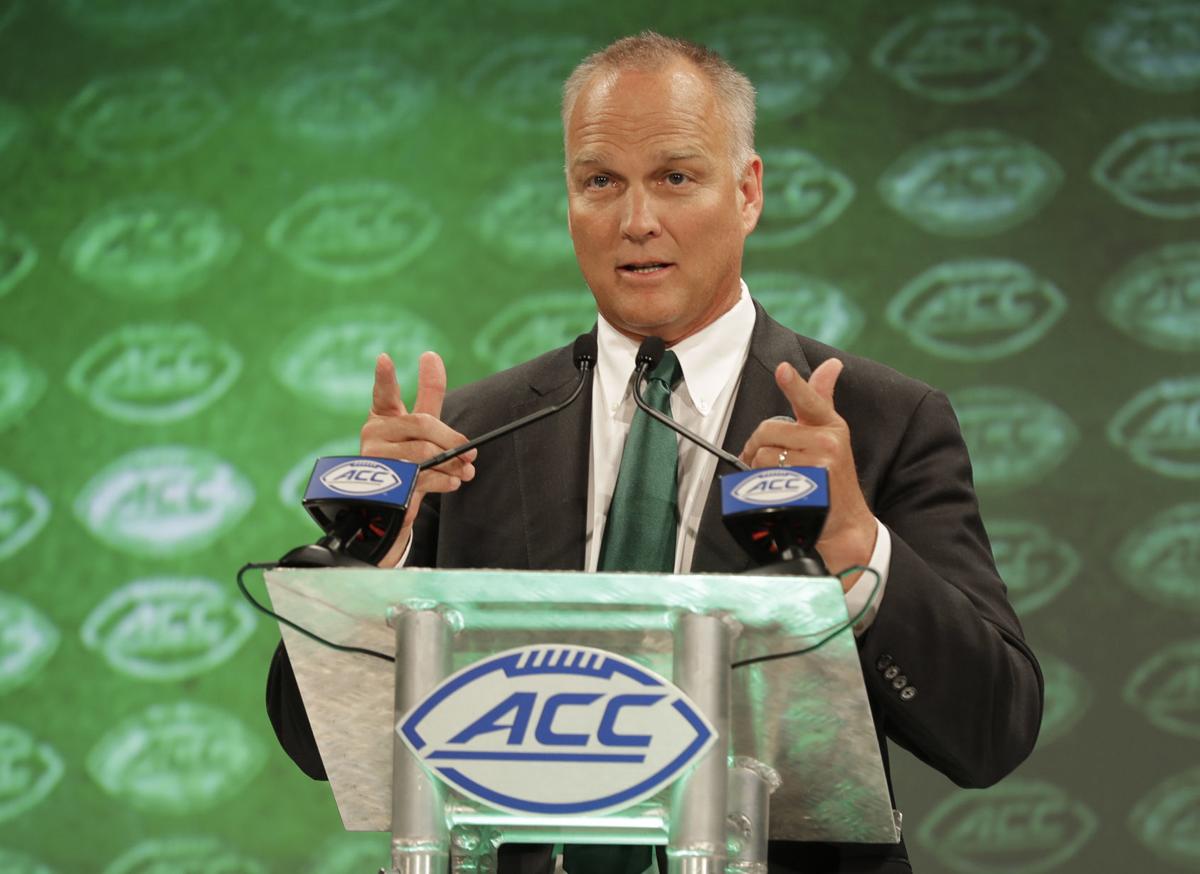 CHARLOTTE, North Carolina — After three years of watching his team struggle to get stops, Pittsburgh coach Pat Narduzzi sees the potential for improvement coming with the return of plenty of defensive starters.

"I walk out there this June, I'm going, 'Whoa, there's a lot of guys there that can play for us,'" Narduzzi said Wednesday during the Atlantic Coast Conference's preseason media days, "which they couldn't play for us a year ago."

It's a feeling that is common through the league's Coastal Division, where defense could be ready to take a step forward by leaning on returning experience.

For the second straight year, five of the seven division teams have at least seven returning defensive starters, including reigning division champion Miami. That formula already led to gains in the division last year, most notably for Duke and Virginia — teams that lean on developing in-house talent more than plugging five-star talent in every season.

Now more teams are hoping to do the same, including for Narduzzi's Panthers with a division-high nine returning defensive starters.

"It definitely matters," said North Carolina defensive tackle Aaron Crawford, whose Tar Heels have seven returning defensive starters. "If you have a good knowledge of the defense, you can know where your help is, where you can lineup, where you can somewhat cheat the scheme while still being in your responsibility and your gap and your fit.

"Having all that maturity and the returners coming back, I think it'll help us a lot."

The goal across much of the division is to at least keep a positive trend going since 2016.

The Coastal teams — Duke, Georgia Tech, Miami, UNC, Pittsburgh, Virginia and Virginia Tech — allowed an average of 26.8 points and 401.2 yards per game that year while surrendering more than 5.6 yards per play. The defensive numbers improved across the board for 2017, down to 24.1 points and 366.7 yards while allowing 5.4 yards per play.

The growth was most pronounced for the Blue Devils and Cavaliers.

Duke ranked 11th in both total and scoring defense for 2016 at 414.7 yards and 28.2 points per game, but finished in the top four in both categories (332.6 yards, 20.2 points) last year. That included a dominating start to the season against the run, where Duke held North Carolina Central, Northwestern and Baylor to a combined 143 yards on the ground to rank among the national leaders.

Now the Blue Devils are bringing back eight defensive starters, including two in linebackers Ben Humphreys and Joe Giles-Harris with 25 career starts. There are also three defensive linemen returning after starting at least 13 games each last season.

"I think one of the things we've really strived to do ... is build a defensive front," Duke coach David Cutcliffe said. "I hear rightfully so a lot of talk here about Clemson's front four — people go to that immediately and you know it's one of the reason's they're consistently successful. ... This is the best defensive line we've had since we've been at Duke, so I think it's going to have a huge impact on our ability to be consistent through a tough 12-game schedule."

Meanwhile at Virginia, Bronco Mendenhall's Cavaliers ranked 12th in 2016 in total defense (446.6 yards), scoring defense (33.8) and yards per play (6.3). That changed behind linebacker Micah Kiser and safety Quin Blanding among eight defensive starters, with the Cavaliers improving against the pass to spark enough defensive improvement to land Virginia in a bowl game.

Virginia still ranked 12th in the league in scoring defense, though it reduced that number significantly (28.4) while climbing into the middle of the league in total defense (365.1).

While the Cavaliers lost Kiser and Blanding, they return eight starters again.

"I made a mistake the first year in putting too much defense in too early," Mendenhall said. "We actually simplified it for Year 2 with the same number of players coming back. I think that led to a significantly better performance and more consistent performance.

"Yes, it helps to have eight guys back and they know that, and they're confident. What's still not clear is who are ... the players that handle the volume of plays to be made that are necessary — even at a higher level because we need to be even better to play."

Pittsburgh football coach Pat Narduzzi, who is pictured at the Atlantic Coast Conference media day Wednesday in Charlotte, North Carolina, said his defense could be improved because plenty of starters return.