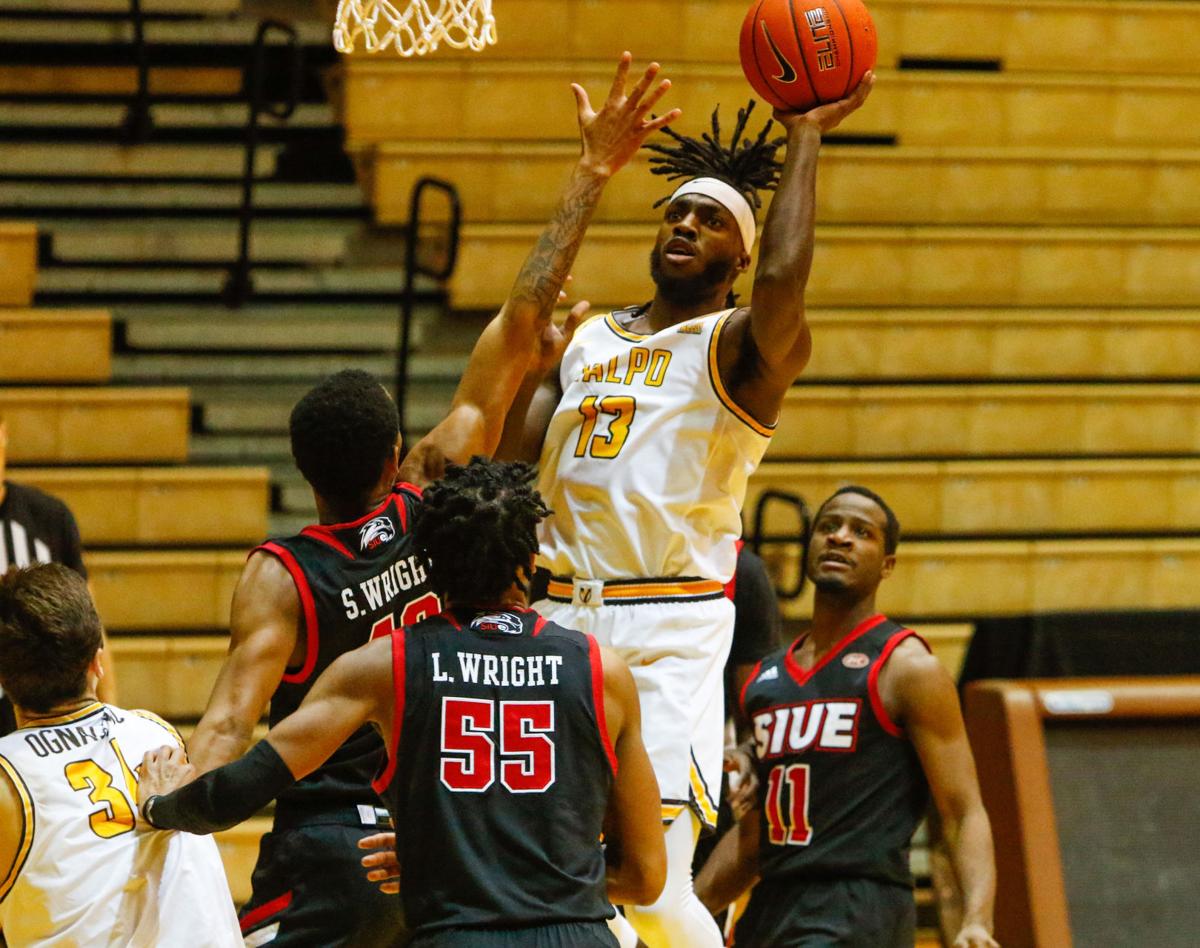 Valparaiso's Sheldon Edwards, right, puts up a shot against Southern Illinois-Edwardsville on Wednesday at the Athletics-Recreation Center in Valparaiso. 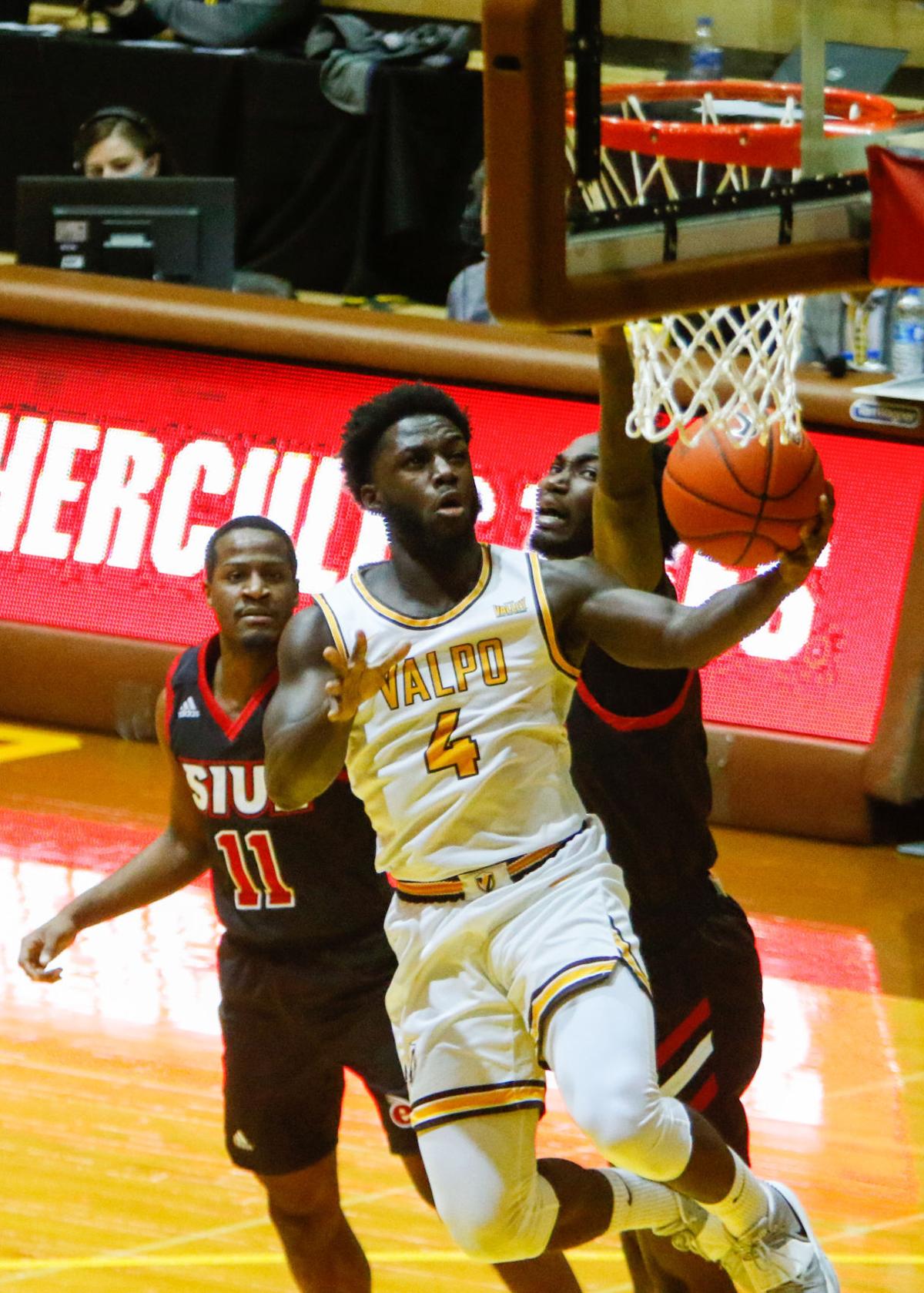 Valparaiso's Daniel Sackey, center, drives through the middle of the lane for the layup on Wednesday at the Athletics-Recreation Center in Valparaiso. 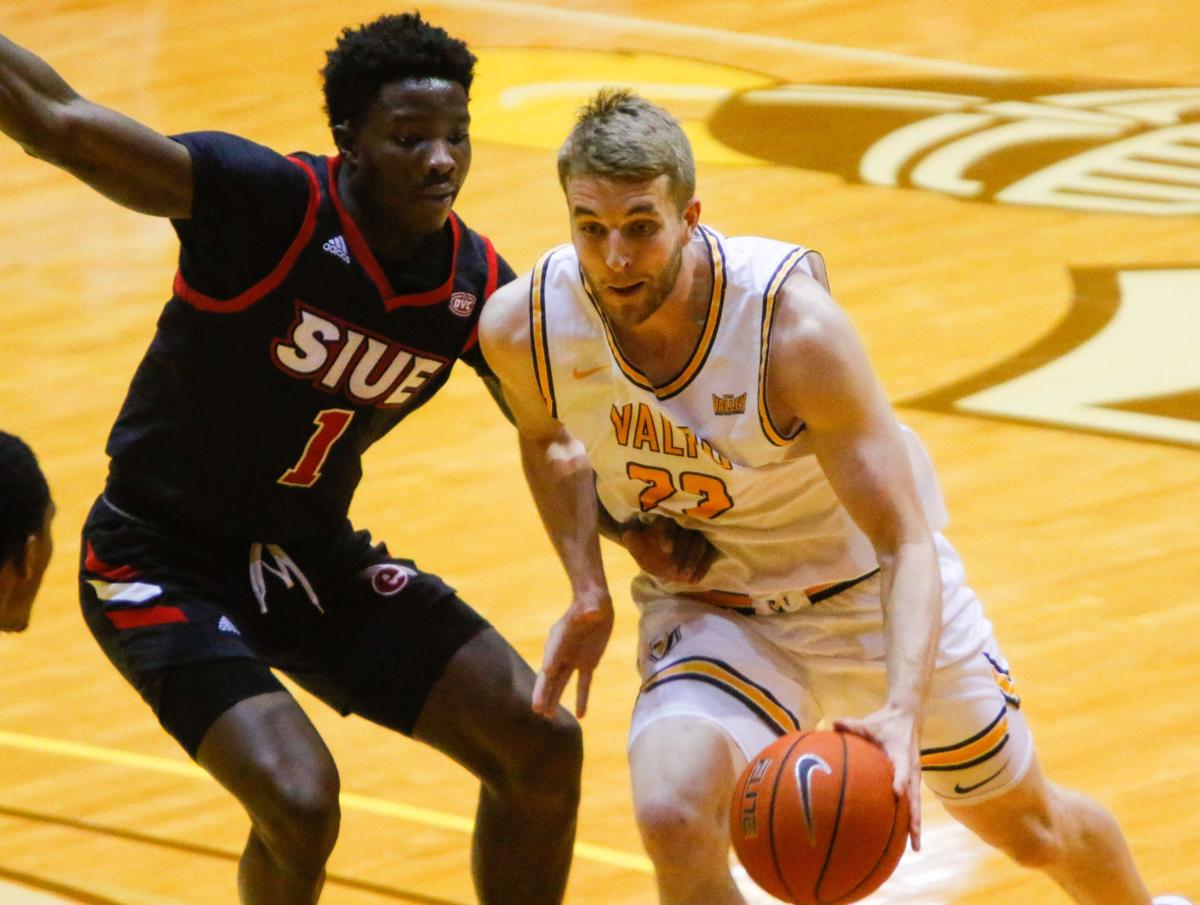 Valparaiso's Ben Krikke, right, is guarded by SIUE's Mike Adewunmi on Wednesday at the Athletics-Recreation Center in Valparaiso.

VALPARAISO — Sheldon Edwards never doubted that his time to break out was coming.

The Valparaiso freshman shook off his struggles from the first week of the season with the kind of performance that he expected to deliver all along. Edwards had a game-high 20 points and eight rebounds to lead the Crusaders to an 80-58 win over SIU-Edwardsville at the Athletics-Recreation Center on Wednesday night.

“These are the times that I live for,” Edwards said. “I just try to get some momentum going for the team.”

Edwards has taken a liking to play at the ARC. After he struggled in his first two starts of the year, Edwards came off the bench last Friday at Purdue and only played 82 seconds. He had 10 points and four rebounds in last Sunday’s home opener against Judson, but even the freshman was quick to downplay that performance against the NAIA program.

“I don’t feel like I played that well on Sunday,” Edwards said. “I shot 5 of 12 from the field. A lot of people were telling me they were proud of me, but I knew that I could do better.”

Edwards showcased his potential with a series of highlight moments, including a pair of 3-pointers and an alley-oop dunk from Daniel Sackey.

“What Sheldon did tonight was let the game come to him,” Valparaiso coach Matt Lottich said. “It’s what we’ve been preaching to him.”

The Crusaders (2-3) got strong contributions across the board, as Sackey had eight assists and four steals while Ben Krikke added nine points in just 11 minutes of action. Lottich moved players in and out of the lineup throughout the night as he continues to look for the right lineup combinations. All 14 available players took the court for Valparaiso and no one played more than 24 minutes.

“(Our depth) is great because at practice, we all can play and it gets super competitive,” sophomore guard Goodnews Kpegeol said. “Everyone wants a spot. We got at it at practice and tonight it translated.”

Kpegeol had a career-high 10 points, including a late flourish in the second half after the Cougars (2-4) cut Valparaiso’s 15 point lead down to five points. The Kansas State transfer added four rebounds and two steals. Eron Gordon had 10 points and two steals and Connor Barrett continued his hot shooting with three 3-pointers and nine points in his first collegiate start.

“The one thing I think we’ve done is we’ve taken coaching well,” Lottich said. “We’re honest with them and they’re responding. That’s all you can hope for. We have a long way to go, but we are improving.”

“I actually thought we did a better job on him today and we didn’t,” Valparaiso coach Matt Lottich said. “I came back and saw 29 on the stat sheet. We’ve got to make good players; we’ve got to make it tougher for them to score.”

Valparaiso will play its third game in a month's time on Saturday.

“It sounds cooler when you talk about a Big Ten win, but it feels great to get this one because (Illinois State) is a better team."

“When we go back and watch the film, we’ll see that we took some possessions off."

“I think she’s a really good player and that’s the best she’s ever played against us. ... I think Shay is a great player and it was a lot of fun watching that matchup.”

The Valparaiso point guard scored 13 of her game-high 20 points in the fourth quarter to lead the Crusaders to a MVC-opening win.

Valparaiso's Sheldon Edwards, right, puts up a shot against Southern Illinois-Edwardsville on Wednesday at the Athletics-Recreation Center in Valparaiso.

Valparaiso's Daniel Sackey, center, drives through the middle of the lane for the layup on Wednesday at the Athletics-Recreation Center in Valparaiso.

Valparaiso's Ben Krikke, right, is guarded by SIUE's Mike Adewunmi on Wednesday at the Athletics-Recreation Center in Valparaiso.