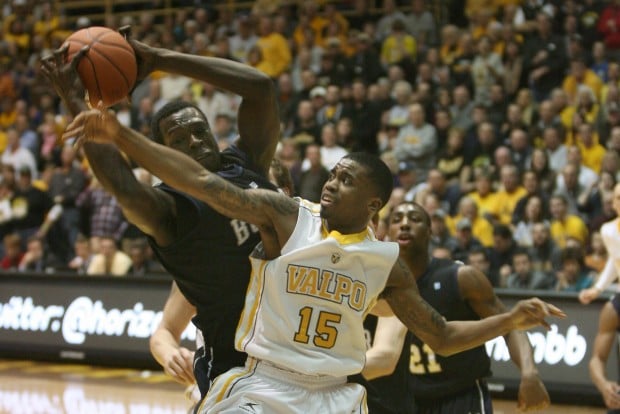 Butler's Khyle Marshall grabs a rebound from Valparaiso's Erik Buggs as Butler takes on Valparaiso in the semifinals of the Horizon League Men's Basketball Tournament Saturday. 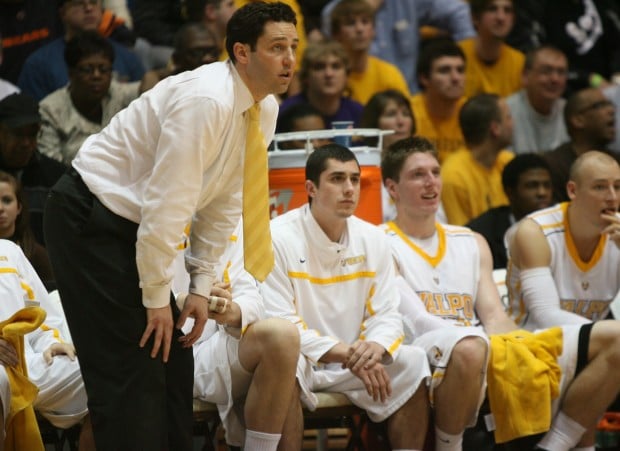 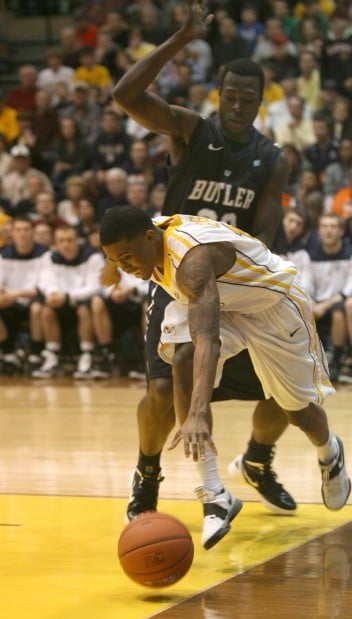 With Butler's Khyle Marshall guarding him closecly, Valparaiso's Erik Buggs tries to keep the ball in bounds as Butler takes on Valparaiso in the semi-finals of the Horizon League Men's Basketball Tournament on Saturday.

VALPARAISO | Beating the Soviet Union was the memorable moment in the 1980 Winter Olympics, but the USA Men's Hockey team didn't win the Gold Medal until a victory over Finland two days later.

A victory over Detroit in tonight's Horizon League title game will send the Crusaders to the NCAA tournament for the first time since 2004, while a loss would take Valparaiso to the NIT.

"We've had goals and one of our goals was to win the conference and host the tournament," Valparaiso coach Bryce Drew said. "As soon as you accomplish one goal, another one pops up. We haven't sat back and reflected on any of this yet and that's something we'll do later."

Drew called Saturday's atmosphere at the Athletics-Recreation Center the best he had seen in all of his time associated with Valparaiso basketball. Tonight figures to be more of the same at the ARC, even with university students on spring break. The Valparaiso ticket office has been flooded with requests while 200 free student tickets were gobbled up in less than 20 minutes on Monday afternoon.

"The crowd has just been excellent here and our guys really feed off their energy," Drew said. "You can see in the opening minutes of the game how exciting it is and how much the crowd impacts the game."

While the Crusaders (22-10) used a strong post offense to derail Butler's dreams of returning to a third straight national title game, Valparaiso will likely have to utilize a perimeter attack against the Titans.

Will Bogan had seven 3-pointers against Detroit on Jan. 6 and Ryan Broekhoff was perfect on all six of his 3-point attempts at the ARC on Feb. 2. The Crusaders won both games by a combined seven points, its slimmest combined margin of victory in five regular-season sweeps against Horizon League opponents this season.

Jay Harris continued to live up to his growing reputation as a clutch postseason player with a pair of big 3-pointers against the Bulldogs on Saturday night. Harris, who scored a game-high 20 points against IONA in the CIT last year, drained a 3-pointer directly in front of Horizon League Defensive Player of the Year Ronald Nored midway through the second half against Butler.

"I was just out there living in the moment," Harris said. "I couldn't even tell you what was in my head. The place was so packed and my head was racing. I just shot it. Then on the next one, well, I had hit that first one, so I just went with it."

Getting good shots will be paramount against a Detroit squad that is known for tenacious defense, in part because of its raw athleticism. The Titans (21-13) will keep the post clogged with long players such as Eli Holman and LaMarcus Lowe, so getting 3-point looks could be the determining factor for a Valparaiso victory.

"They switch all ball screens and play very strong defense in those first 10 seconds of the shot clock," Harris said. "We need to work through that, get a breakdown from them and then take advantage."

Michigan State's Draymond Green was chosen as player of the year in the Big Ten by two panels, one comprised of media, the other made up of coaches, while Spartans coach Tom Izzo was selected as coach of the year for a third time as the Spartans finished 24-7 and 13-5 in the league after starting the season unranked.

There was a split for freshman of the year: the media tabbed Trey Burke of Michigan, and the coaches chose center Cody Zeller of Indiana.

The coaches also honored Ohio State's Aaron Craft as defensive player of the year, and D.J. Byrd of Purdue as sixth man of the year. !~ The Associated Press

Win and VU is in

VALPARAISO | When the Valparaiso University's men's basketball team comes on the floor for lineup introductions, Jay Harris takes his spot in …

Butler's Khyle Marshall grabs a rebound from Valparaiso's Erik Buggs as Butler takes on Valparaiso in the semifinals of the Horizon League Men's Basketball Tournament Saturday.

With Butler's Khyle Marshall guarding him closecly, Valparaiso's Erik Buggs tries to keep the ball in bounds as Butler takes on Valparaiso in the semi-finals of the Horizon League Men's Basketball Tournament on Saturday.