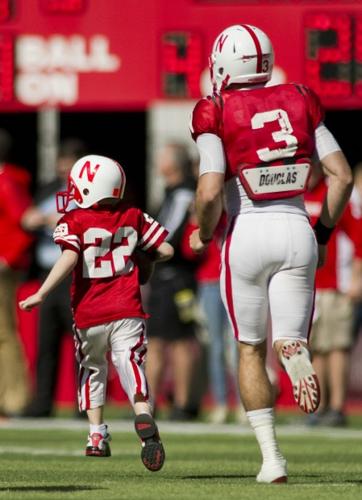 Nebraska's Taylor Martinez (3) guides seven-year-old Jack Hoffman, of Atkinson, Neb., down the field for his touchdown play during a special segment dedicated to the youngster at Saturday's Red-White Spring Game. 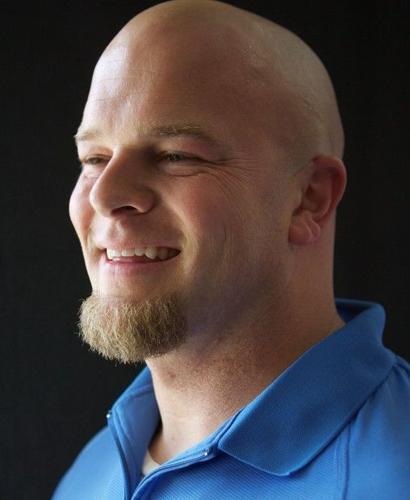 Feel-good stories are as rare as a Cubs winning streak.

Did you see that video clip of 7-year-old Jack Hoffman, dressed in a full Nebraska uniform, charging down the field as 60,000 fans cheered him on at the Huskers' spring game last Saturday?

Little Jack is battling brain cancer, and a 60-week chemotherapy protocol plus two surgeries had made his young life a daily ordeal — until Nebraska coach Bo Pelini intervened.

Jack's inspiring 69-yard touchdown run as Nebraska players cleared a path to the end zone had more than 2 million views on YouTube by Monday. It also aired on ESPN and national news networks.

After the scrimmage, a bald Jack and the team took a knee in the locker room, held hands, and prayed for those who have a cross to carry in life.

America clutched the pint-sized hero to its breast and had a good cry as Twitter went crazy.

"What a great piece," he said of the touching video clip. "I was a mess (emotionally). And what a sense of pride, that being my school."

Tomich's Halo of Hope organization for young cancer victims works with the hospital in Omaha as well as 10 others nationwide. He had been closely following Jack's story on Facebook.

Each year, Tomich and former NFL players Grant Wistrom and Jerry Wunsch pick several kids from their hospital network and treat them to a week at their Circle of Friends Camp in Wisconsin.

"Twenty-five percent of those kids (eventually) don't make it because of their cancer," Tomich said.

What happened over the weekend at the University of Nebraska didn't surprise the 1992 Lake Central grad.

Such humanity is as deeply ingrained in Nebraska athletes and coaches as are its 350 consecutive home sellouts and having the best overall record in college football the last 50 years.

"There, it's just college football," Tomich said. "Everyone's energy is put into one team, one sport."

His senior season at Nebraska, Tomich recalled how a young fan with cancer was brought into the locker room to meet his idols, all of them bald, and had his head shaven as well.

They gave him an official Nebraska game jersey.

They took photos of the boy with his new buddies.

"We helped him 'ease' into the social part of having cancer, and it was neat to see how that helped him at school while being around other kids," Tomich said.

"That was about as cool as it gets."

"That caring nature was one of the things Tom Osborne instilled in his players, and Bo is doing that now," Tomich said.

We need more feel-good stories. They're like sunshine and 70-degree temps.

You can't get enough.

This column solely represents the writer's opinion. Reach him at al.hamnik@nwi.com

Nebraska's Taylor Martinez (3) guides seven-year-old Jack Hoffman, of Atkinson, Neb., down the field for his touchdown play during a special segment dedicated to the youngster at Saturday's Red-White Spring Game.