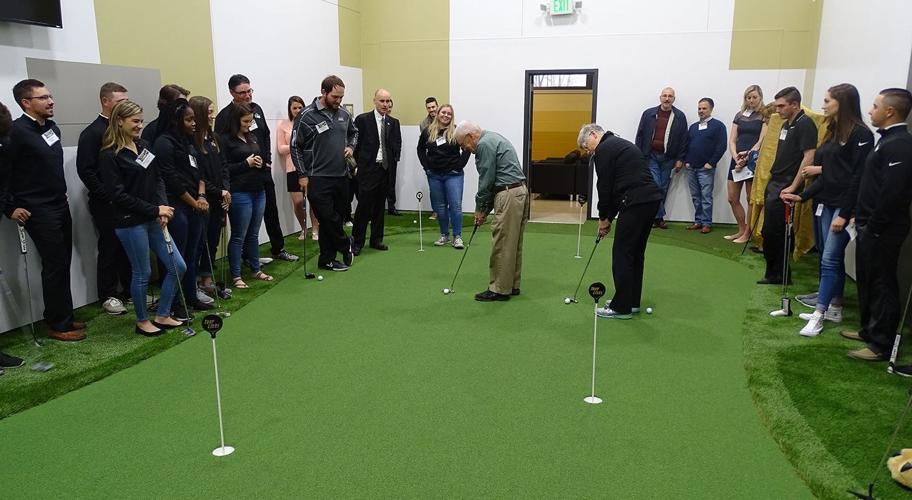 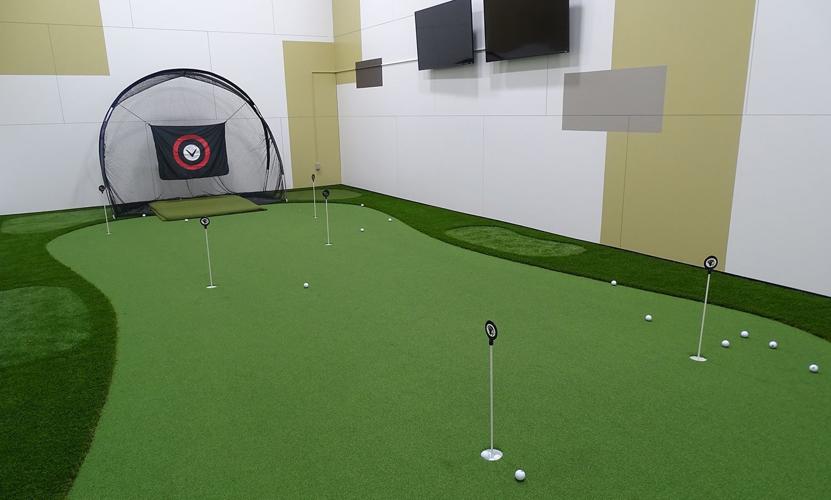 HAMMOND — The key to Purdue Northwest's future golf success may lie in an 800-square foot room.

The impressive indoor facility was made possible through a "generous gift" from long-time supporters Burney and Barb Fischer and features five types of synthetic turf with surfaces for putting, chipping, pitching and full swing.

And you thought golf was just an excuse to hang out with buddies, enjoy some fresh air, and get a tan.

Not at PNW, a serious wannabe in Division II.

A recent survey of golf publications revealed how much focus and commitment the sport demands.

"Thirty-seven and a half hours a week," coach Randy Wexter said. "That's the average time an elite college golfer spends working on their game."

It's been a crazy spring, but forget those rainy, cold, blustery days. PNW golfers now have "A Quiet Place" to work on their game regardless of the elements.

"It's a classroom for our student-athletes to refine their golf skills," athletic director Rick Costello said of the converted racquetball court.

"We're going to keep seeing this (program) grow and get better to where we can compete at the Division II level," added former PNW standout Patrick Mudd, now chasing his dream on the West Florida Coast Pro Tour.

Mike Lalaeff was an accomplished golfer, swimmer, teacher and nationally-recognized handball standout from Hammond, and also a close friend of the Fischers until he passed away in 2011.

It was Mike who taught Burney how to play golf.

Lalaeff was inducted into the Hammond Sports Hall of Fame in 1999 and the Fischers wanted to honor him for his dedication to youth and area golf with the training center, while continuing to support the Mike Lalaeff Scholarship Fund.

"A special day," said Burney, a Hammond grad. "Mike would be amazed (by this facility) and the fact his name is on there ... he'd be stunned."

They anxiously toured the new facility, dubbed "The Clubhouse," and took turns testing it out with their clubs.

"It's huge. It's a game-changer," Wexter said. "Just from a recruiting standpoint and the kids getting enough repetitions, it's probably one of the best things we could do.

"They've watched the whole process as it went along but once it was finished and they got to go in there, they were shocked. It was like: 'Wow! This is cool.'"

PNW features 13 varsity sports and is completing its first year as members of the Great Lakes Intercollegiate Athletic Conference at the NCAA Division II level.

Last weekend, its men’s and women’s teams wrapped up their spring season at the three-day GLIAC Golf Championships at The Virtues Golf Club in Nashport, Ohio.

The women finished 11th and the men — bolstered by top 10 finishes from Jacob Plummer and Chase Picken — were sixth out of 11 teams.

"The goal is always to win an NCAA championship," said Wexter, who recruits nationally. "I'm looking at players in California, Florida, Texas, Arizona, all over.

"It's all about finding the right players who buy into the culture."

The Purdue name and its renowned engineering program also serve as a recruiting magnet.

"The sky's the limit," Wexter said.

That 800-square foot room can only help.

HAMMOND — Being chosen to a sports hall of fame is like scratching off a winning lottery ticket. You need some luck to cash in.

Given that Santa and I go way, way back together, I've been asked to pass out gifts to lighten the load for Fed Ex, UPS and his aging reindeer.