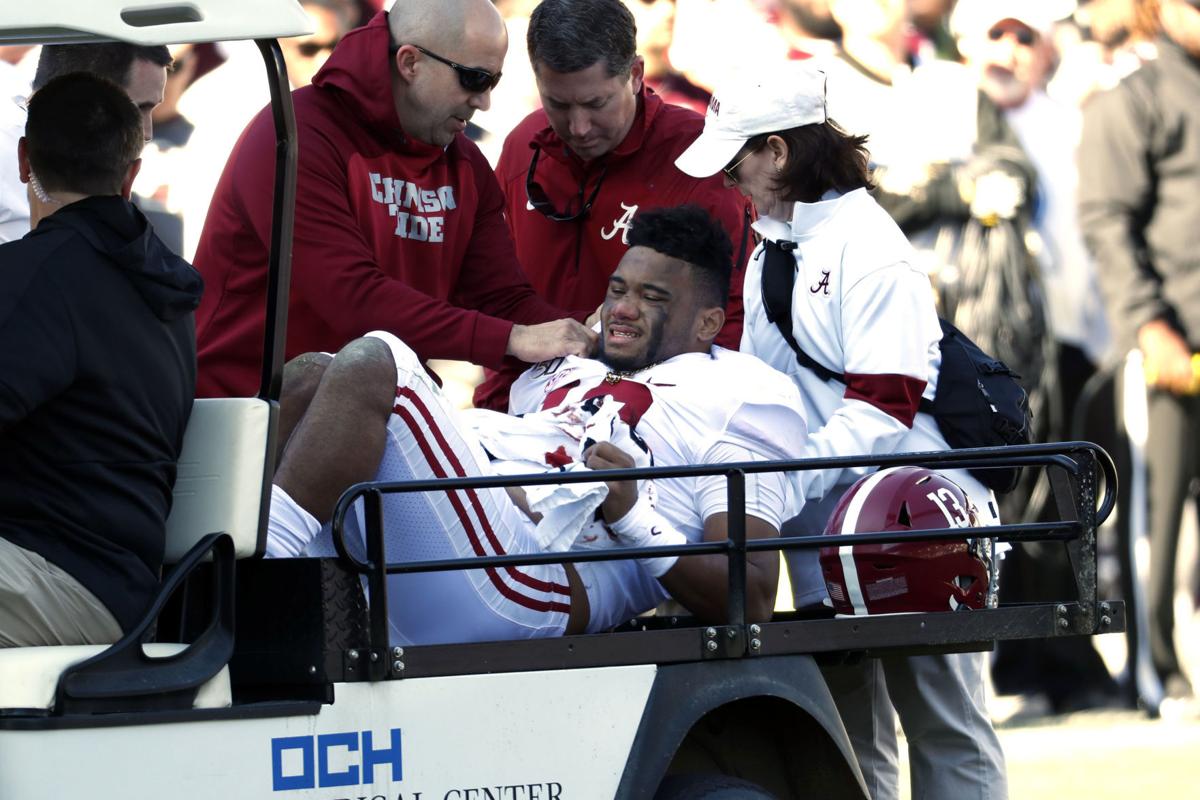 Alabama quarterback Tua Tagovailoa (13) is carted off the field after getting injured in the first half of an NCAA college football game against Mississippi State on Saturday. 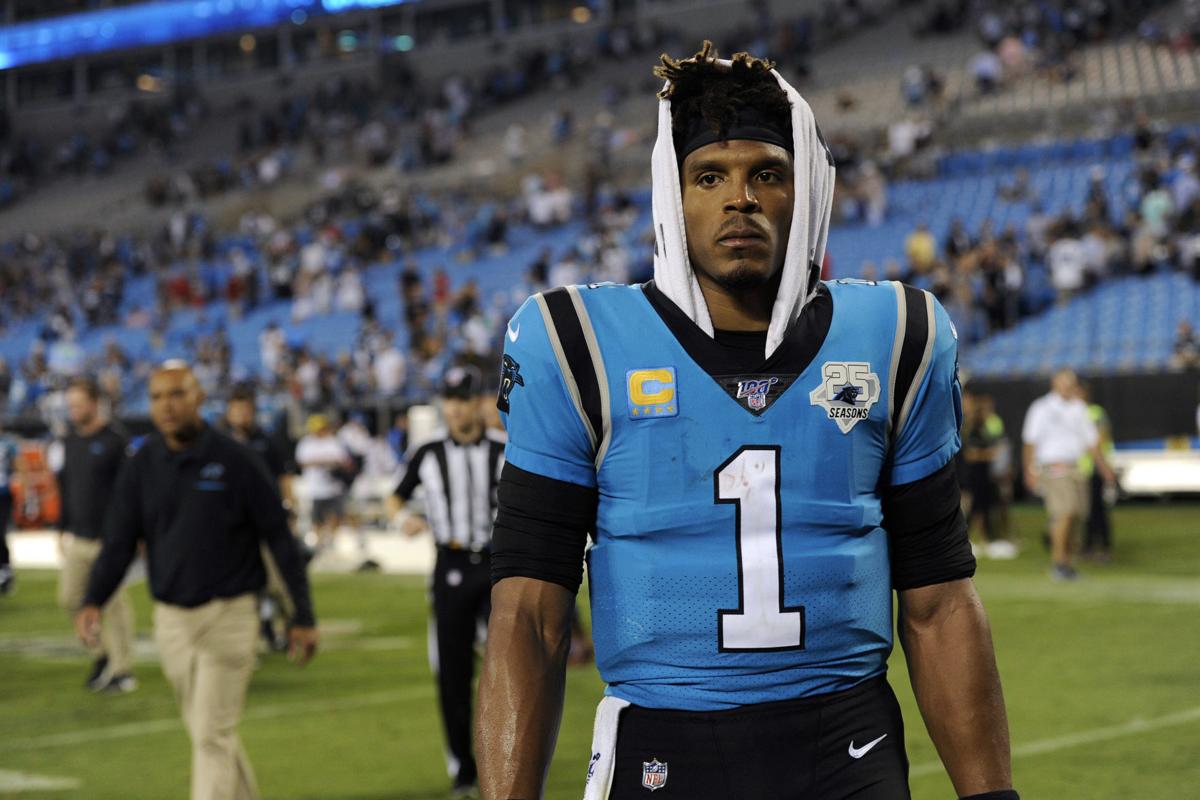 Cam Newton walks off the field following the Panthers 20-14 loss to the Tampa Bay Buccanneers on Sept. 13, 2019. Newton suffered a foot injury that cost him the rest of the 2019 season.

This was going to be the column about Carolina Panthers quarterback Cam Newton. After suffering a mid-foot (Lisfranc) sprain in the third game of the preseason, the 2015 NFL MVP just had to be in the line-up for the season opener two weeks later. The reasoning behind such a rapid return is mystifying for several reasons.

First, the medical literature recommends surgery for almost all Lisfranc sprains. Second, in the rare instances where surgery is not necessary, full weightbearing in a shoe is not allowed until four weeks post-injury. Thus, the only surprise is not that Newton re-sprained the foot in Week 2 of the regular season but that he somehow was not re-injured in Week 1.

Since aggravating the injury, though, Newton has not returned and he was placed on injured reserve by the Panthers earlier this month, thus ending his season.

One would think, then, that other football teams would learn a lesson from Carolina’s recent experience and be cautious when returning a similarly afflicted player.

No such lesson learned apparently by Alabama.

Crimson Tide quarterback Tua Tagovailoa returned against LSU 10 days ago, less than three weeks after having surgery to repair a high right ankle sprain. Any question of whether or not the return was too soon was answered by the pronounced limp with which Tagovailoa played in the second half of that game. And all was for naught, with Alabama losing despite some second half heroics from its gimpy signal caller.

Consequently coming into Saturday’s game against Mississippi State, prohibitive favorite Alabama was expected by many commentators to sit their star, not only against the Bulldogs but this week, too, against FCS foe Western Carolina.

Nonetheless, Tagovailoa warmed up without difficulty and Alabama head coach Nick Saban stuck with his starter, who played well all through the first half — until the final drive.

After some sideline discussion about whether or not to pull the starter with a comfortable 35-7 lead, both quarterback and coach agreed the time was right to practice their two-minute drill. Nobody consulted the Mississippi State defense, linebacker Leo Lewis and defensive end Marquiss Spencer in particular.

With just over three minutes remaining in the second quarter, while Tagovailoa rolled left on a pass play, Lewis and Spencer ran him down, landing on top of him and in the process dislocated his right hip — and his prospects of being the first pick in the 2020 NFL draft.

So, the question remains — even more so, should he have been playing so soon after ankle surgery?

He may not have been limping like he was against LSU but had he been able to run at full speed, do you think Lewis and Spencer would have tracked him down so easily?

Alabama team doctors were able to reduce the dislocation onsite in Starkville before Tagovailoa was airlifted to Birmingham.

Surgery was planned for Monday in Houston but this procedure will result in a recovery lasting longer than weeks. Instead, it will be at least a month or two before it is known if Tagovailoa will be able to resume playing at all.

The hip is an extraordinarily stable ball-and-socket joint that requires extraordinary force to dislocate. A full 70% of such injuries are caused by car accidents when the victim’s knee strikes the dashboard.

The remaining 30% occur in sports — almost exclusively in football and rugby — “when a running player is tackled from behind and falls onto a flexed knee and hip,” according a January 2018 article in Medscape. “As the opposing player falls onto the tackled player’s back, his added weight drives the torso and pelvis to the ground, and the femoral head (the ball of the joint) is thus driven out of the socket posteriorly.”

Fracture to the posterior socket wall, which did occur to Tagovailoa, as well as nerve damage often accompany the injury. Yet, the greatest danger is occlusion, or tearing of the single artery to the femoral head. Robbed of that circulation, the bone slowly dies, ultimately necessitating hip replacement surgery, which is the result in up to 40% of cases.

That is precisely what happened to two-sport legend Bo Jackson after he was injured in January 1991 while playing for the Oakland Raiders, with surgery in 1992 while he was playing for the White Sox.

The fact that Tagovailoa’s hip was put back in place in under six hours reduces the likelihood that he will be among the 40%.

An MRI six weeks from now will tell if the process of avascular necrosis has started. If not, expect a result more akin to another Alabama player, C.J. Mosley. Now with the New York Jets, the linebacker suffered a dislocated hip his sophomore year with the Crimson Tide in the 2012 BCS National Championship game against LSU, when tackled after making an interception. He made a full recovery, playing in every game his junior and senior years before being drafted in the first round of the 2015 NFL draft by the Baltimore Ravens.

Alabama quarterback Tua Tagovailoa (13) is carted off the field after getting injured in the first half of an NCAA college football game against Mississippi State on Saturday.

Cam Newton walks off the field following the Panthers 20-14 loss to the Tampa Bay Buccanneers on Sept. 13, 2019. Newton suffered a foot injury that cost him the rest of the 2019 season.