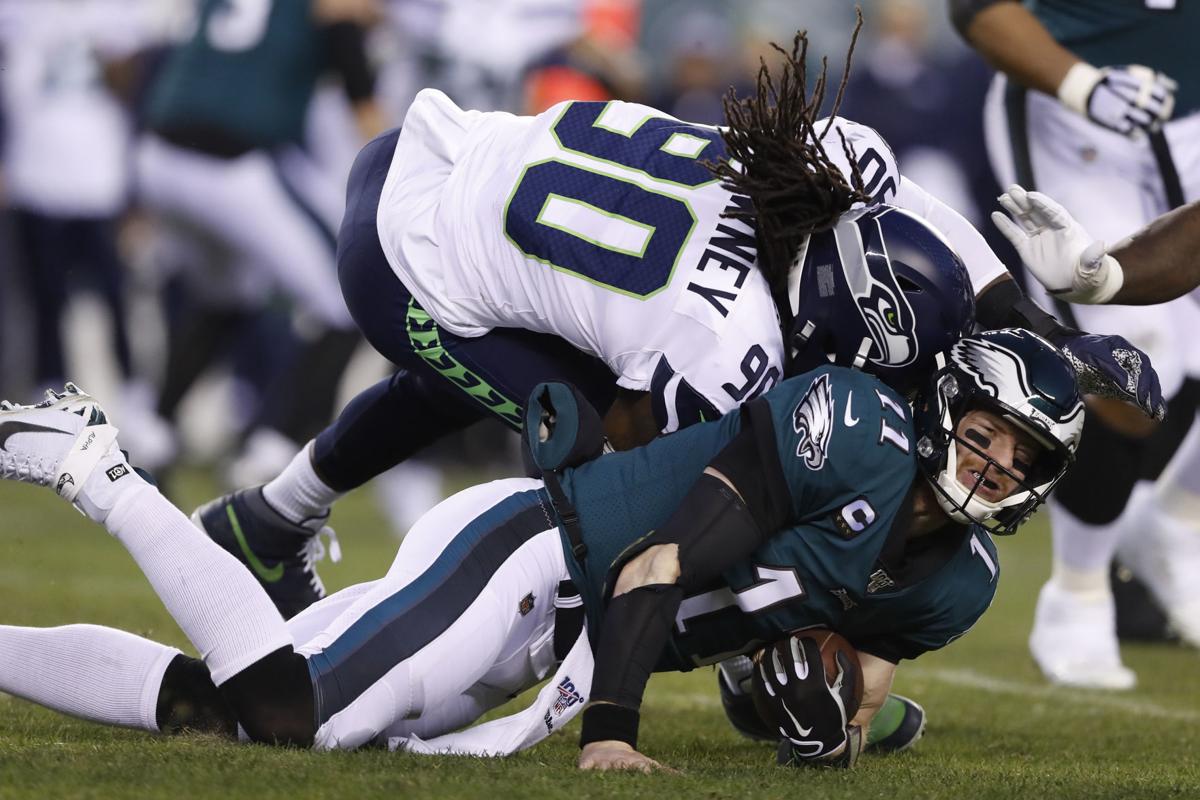 Eagles quarterback Carson Wentz, right, suffered a concussion after being tackled by Seattle's Jadeveon Clowneyduring the first half of an NFL wild-card playoff football game on Jan. 5 n Philadelphia.

In the wake of Seahawks defensive end Jadeveon Clowney delivering a seemingly intentional hit to the head of Carson Wentz on Jan. 5, the Eagles quarterback remained in the NFC Wild Card game for the rest of the series.

However, in short order, he was seeking help from the Philadelphia medical staff on the sideline.

Clowney was not flagged for the hit and Wentz did not return to the game, diagnosed with a concussion.

In an interview with the Associated Press on Thursday, the NFL’s chief medical officer, Dr. Allen Sills said, “I think what Carson Wentz did is heroic and should be highlighted as an example of how an unbelievably skilled and competitive athlete understands the seriousness of concussion injury and is willing to honestly report it and receive the care that he needs independent of his desire and drive to continue to participate in the game."

I doubt Wentz would agree. According to reporting by ESPN’s Stephen A. Smith, Wentz sought assistance because his condition had regressed to the point that he could no longer stand up straight. I suspect if his symptoms had been less severe, he would have stayed quiet, as he did immediately after the hit.

Video of those moments shows he was instantly affected. Nonetheless, he kept playing.

Worse, according to ESPN, at least one of Wentz’s teammates — tight end Zach Ertz — acknowledged that he knew something was wrong with Wentz “right away.”

The notion that all concussed players are routinely going to self-report is just not yet realistic as evidenced by multiple studies that continue to show the vast majority do not, especially backups fearful of losing their jobs. Some of those who do not report may very well recognize that they should be seeking care. However, lost in this drive to place the responsibility of reporting on victims is the fact that, once concussed, many victims have their memory and judgment impaired.

Asked if the NFL’s concussion detection system is broken because video spotters and sideline neurotrauma consultants missed Wentz’s injury, Sills responded, "I would vigorously disagree. Video identification of (symptoms) is one part of a concussion identification. You're not going to see things like amnesia or confusion on video, and that's why all the other elements of detection are really important."

However, teammates are going to see those “things” and they are a key element of detection. Yet, Ertz said nothing to the Eagles medical staff. Sills, while perhaps praising Wentz, should have first focused on that failure to report.

He might also talk to his NFL bosses about rule changes and league culture because, as the NFL is currently constituted, concussions — like elections — have consequences. And last week in particular, none of them seemed right.

In the days after the game, ESPN’s Smith complained that Clowney should have been flagged for the hit. Still, seen in real time, with Clowney coming down on top of Wentz from behind, it is doubtful that the referees were able to see just how egregious the hit was. As he brought Wentz down, Clowney clearly made an intentional effort to contact the back of Wentz’s helmet with his own.

In the ensuing moments of a college game, before the next snap, referees in the press box could have called a timeout, reviewed the video, and assessed a targeting penalty that would have resulted in ejection. In the NFL, there is no such mechanism.

Absent the penalty, though, Clowney would still surely be fined by the League. Right? Apparently, according to multiple reports, the League has decided not to punish Clowney.

Meanwhile in Philadelphia, on the same day Sills was praising Wentz, the Eagles were firing offensive coordinator Mike Groh and wide receivers coach Carson Walch, one day after head coach Doug Pederson said they would be retained.

Had Wentz not been injured, the Eagles very well may have defeated the Seahawks and the two assistants would still have been employed — at least for another week. Alternatively, the Eagles were forced to play the remainder of the game former Bear Josh McCown, a 40-year-old backup quarterback who quickly suffered a torn hamstring but remained in the game because there was nobody to replace him. McCown started the season as an ESPN studio analyst but now faces surgery that is unlikely, at his age, to save his career.

Was it Groh’s and Waltz’s fault that Wentz was injured?

The hugely profitable NFL and its owners are responsible for roster limits that make third-string quarterbacks a rarity and a salary cap that made it impossible for the Eagles to keep backup quarterback and Super Bowl LII MVP Nick Foles.

I don’t know what the solution is to the knee-jerk firing of assistant coaches now in vogue following big-game losses. However, the NFL could easily expand rosters and eliminate the salary cap. More importantly, the NFL should guarantee all contracts, as is the case in other professional sports. Doing so would give all players the job security that would make reporting injuries, especially concussions, easier and not so “heroic.”