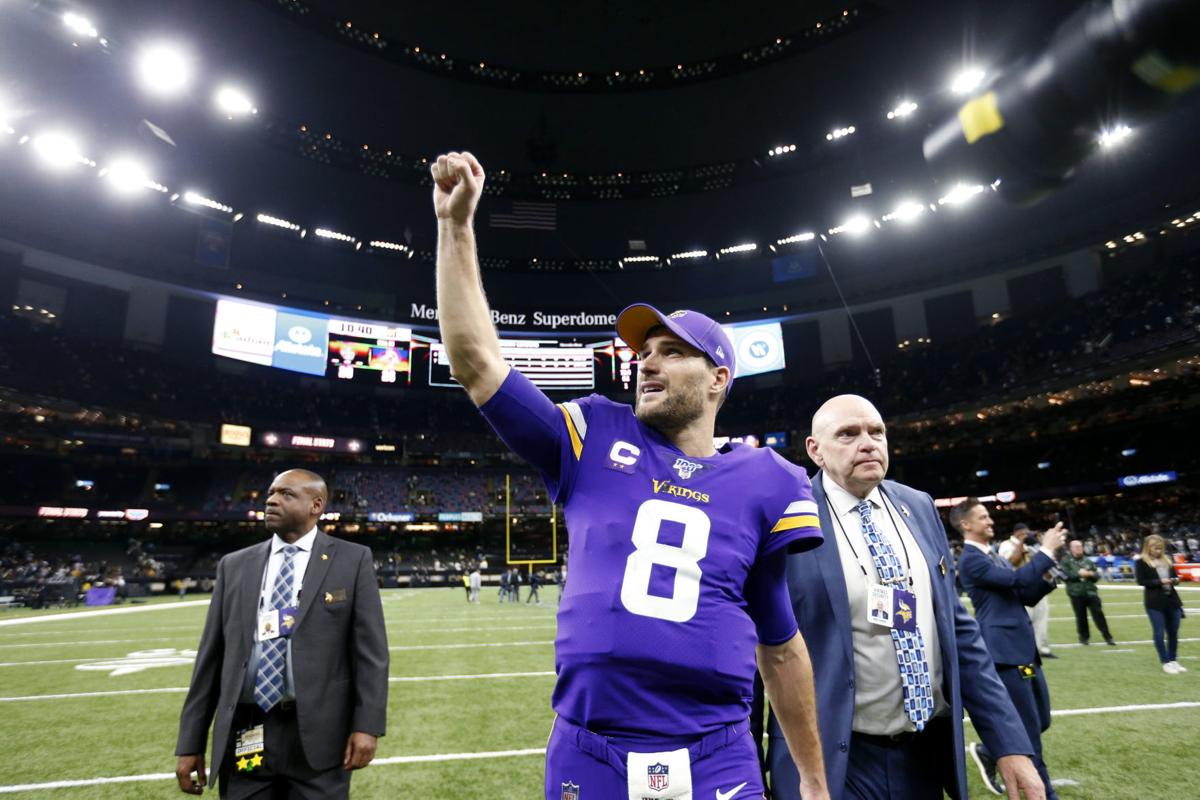 Vikings quarterback Kirk Cousins reacts as he walks off the field after their overtime win over the Saints in an NFL wild-card playoff game last Sunday in New Orleans.

If the NFL postseason has taught me anything through the years, it's to expect the unexpected.

That might be a little cliche, but it proved true again in the opening round this year when the two biggest favorites went down to upsets — one of which (Vikings over Saints) was a shocker, and the other (Titans over Patriots) very much an en vogue pick.

Few expected the Saints, favored by more than a touchdown, to lose to the Vikings in New Orleans. Many people, in fact, were picking Drew Brees to lead them to a Super Bowl win. That loss also showed how football can be a game of inches, sometimes. When Seahawks tight end Jacob Hollister came up about 2 inches short of a touchdown with seconds left against the 49ers in Week 17, it gave San Francisco the win. Had Seattle won, the Saints would've had a first-round bye and that Vikings matchup wouldn't have happened.

But it did, and now the Saints will watch from home and the Vikings will try to pull off another upset. This week, they appear to be the hot upset pick over San Francisco. Can you imagine the Vikings playing for a trip to the Super Bowl against the Packers in an all-NFC North game — the same Vikings team that lost twice to the Bears this year?

It could happen. In the opening week, the favorites went 2-2. When January rolls around, teams love to stick it to the oddsmakers. How many games will have the numbers bucked this weekend?

The skinny: In Week 17, the 49ers were inches away from having to play in the opening round. Instead, they wound up with the No. 1 seed, home field advantage, and a chance to get rested. How much will that rest matter against a Vikings team that is riding a confidence wave after a major upset win on the road against the Saints, though? The Saints are bigger offensive threats than the Niners, and the Vikings' defense was outstanding against New Orleans. It's hard to think that was a one-and-done fluke thing. The Vikings stepped it up when it counts, and are loaded with solid veterans. San Francisco's defense is sensational, and if the Vikings are to pull off another huge upset, they may have to grind it out and steal it at the end. Running back Dalvin Cook faces a Niners defense that has struggled against the run, but is No. 1 in the league against the pass. Defensively, the Vikings will have to hope for some mistakes from quarterback Jimmy Garoppolo. I think they'll get some and pull off another shocker.

The skinny: Titans running back Derrick Henry continued to be the best ball carrier in the NFL in the opening round, and, in the process, was a huge part in Tennessee's upset of the defending-champion Patriots. It doesn't matter how much New England might be on the downturn of its dominance — a 182-yard performance against any Patriots team is something to shout about. Can Henry find the same level of success against the Ravens? That's the big question. His offensive line might be the best in the game, and it's an improved line over the 2018 version that lost 21-0 to the Ravens. In that game, Henry had only seven runs for 21 yards. He'll find more openings this time, but the Ravens counter with QB and soon-to-be league MVP Lamar Jackson, who broke the quarterback rushing record in the regular season (added 36 passing TDs) and helped Baltimore to an NFL record for total rushing yards. The Ravens have the No. 2 overall offense in the league and the No. 4 overall defense. On the other side of the field, the Titans ranked near the lower third of the league at No. 21 defensively. If it comes down to which team can stop the run better, it should be the Ravens, especially at home.

The skinny: Against Buffalo in the opening round, Houston QB Deshaun Watson put the Texans on his back and led them to a win. It helped his defense had J.J. Watt back, too, as well as Whitney Mercilus in fine form. Watson played so well last week, because he was painted into a corner by some shoddy offensive line play. He wound up running 14 times, which shouldn't have had to happen. If he has to do that this week, he'll have a much more difficult time against a Chiefs defense that is more creative than what the Bills brought to the table. Back in Week 6, the Texans went into Arrowhead Stadium and pulled off an upset against Kansas City. But that was forever ago, and this feels like the type of game in which Andy Reid will tell QB Patrick Mahomes to let loose with Tyreek Hill and Travis Kelce and put up some big numbers.

The skinny: This seems like a matchup we've seen a bunch in the past, and it also seems like a game that always is a lot of fun. That could be the case again Sunday. The Packers are statistically just middle-of-the-pack across the board, but like we saw with the Vikings last week, stats often go out the window when the playoffs roll around. They'll have the Lambeau Field advantage here, which should help. And it's bizarre, but Packers QB Aaron Rodgers won't be the best signal caller on the field. That honor goes to Seattle's Russell Wilson. He'll have to have a huge game if the birds are to move on, but he'll have to do it against a Packers defense that will be intent on stopping the run, which it struggled with in the regular season. Stopping the feel-good Marshawn Lynch story might be easier than stopping Wilson, but Rodgers should be able to get it going now that it counts.

Matt Erickson is an award-winning writer and editor based in Northwest Indiana. He is an assistant sports editor for USA Today's MMA coverage and also occasionally writes about the Oscars, food and travel for The Times.

Vikings quarterback Kirk Cousins reacts as he walks off the field after their overtime win over the Saints in an NFL wild-card playoff game last Sunday in New Orleans.