STEVE HANLON: Illiana Christian looking for some Hoosier Hospitality
Share this
{{featured_button_text}}
1 of 2 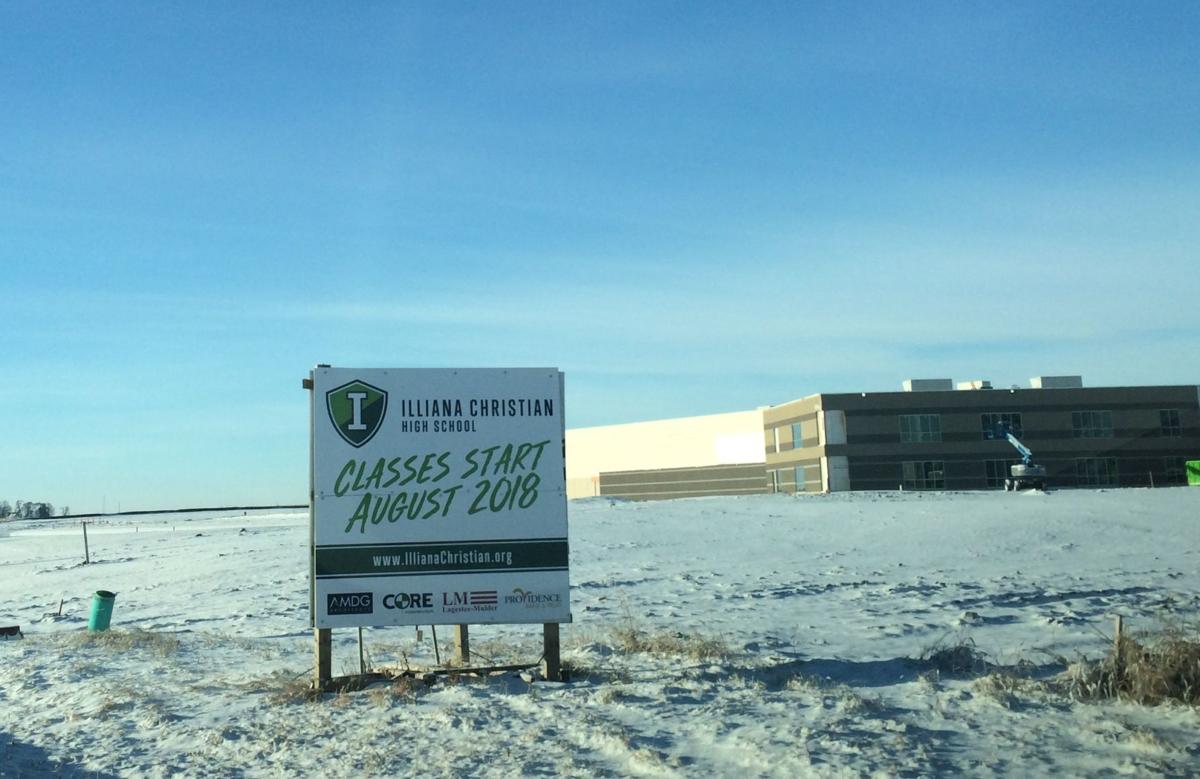 Illiana Christian's new campus in Hanover Township is coming along as the school will move from Lansing, Illinois, to Indiana before the start of the 2018-19 school year. The Vikings athletic department is looking for a new conference for its 18 sports and awaiting how long the IHSAA will make Illiana wait for postseason tournament play.

Construction at Illiana Christian High School's new campus in Indiana is moving along swiftly as the school will move from Lansing, Illinois to Hanover Township for the 2018-19 school year.

Illiana Christian is not a fly-by-night AAU school more concerned about building a gymnasium than a library.

But as the Vikings athletic department prepares for its move from Lansing, Illinois to Hanover Township in Indiana in the fall, Illiana is facing a tough task because of previous quick championships by schools like Bowman Academy.

Athletic director Darren DeBoer is extremely excited about the future of his school with 465 students who are coming to Indiana for the 2018-19 school year, where half of the students live.

But he is concerned about the four-year waiting period for new members of the IHSAA before schools are eligible for postseason play.

DeBoer has spoken to IHSAA commissioner Bobby Cox on several occasions and the school with deep Dutch Reformed roots will be applying for membership with the IHSAA very soon.

But the school is hoping an entire class of student athletes won't graduate without ever participating in a sectional.

"I understand (the IHSAA) doesn't want sports schools popping up all over the place and there's been a problem with that in the past," DeBoer said. "But we've been around for 70 years."

Illiana has 18 sports. Like most schools, they have good years, average years and sometimes tough seasons. DeBoer wanted to make one issue clear to anyone worried about his school crossing the state line.

"We have never won a state championship in any sport," he said. "We don't recruit. We have certain beliefs that our incoming students are expected to follow. Our enrollment process is consistent."

DeBoer said he reached out to the National Federation of State High School Associations, also in Indianapolis, to see if they have any record of a high school changing states before. He said he's been told the NFHS hasn't found such a case like Illiana's.

Approval of state association membership isn't the only things that Illiana is dealing with. Several sports between the IHSA in Illinois and the IHSAA in Indiana compete in different seasons, so the Vikings will be switching to the Hoosier way in several sports.

The school has been a part of the 14-school South Metro Suburban Conference, with drives as far as Aurora for Tuesday night tennis matches. Of course, Illiana is leaving the SMSC as it moves to the state where Abraham Lincoln lived first.

DeBoer said they have requested applications to two local conferences, which he didn't want to name at this point in the process. I am quite sure that the Greater South Shore Conference and the Porter County Conference are the two the likely Class 2A school are interested in.

In a time of great change and excitement, DeBoer said he gets asked one question every two or three months.

That makes conference affiliation much more difficult. It would be difficult for the GSSC to bring in a school that doesn't play football since the gridiron is why the league got started in the first place.

That leaves the PCC, where football isn't a driving force.

"It's difficult right now because nobody really knows us," DeBoer said.

The second-year AD is working hard to tear down this wall. He's on the phone every day trying to build an Indiana-based schedule for all his teams. He's talking to anyone who will talk to him.

I think Illiana is a great school with a great tradition and it would fit perfectly into the PCC. Whether that happens or another league swap over occurs only time will tell.

I also hope the IHSAA listens to the postseason concerns of Illiana. Students might consider going elsewhere if they are not allowed to compete in sectionals, which is a big part of the high school experience.

Bowman Academy became tournament eligible in 2009. The Eagles boys basketball team won a sectional in its first postseason. Over the next five years Bowman made it to state four times.

That's when the two-year probation period was moved to four because the IHSAA saw the competitive issues with such schools.

Illiana Christian is in a completely different situation. They've been solid members of the IHSA for 70 years. The Vikings should be treated differently.

"I think we're a good fit for a lot of conferences," DeBoer said. "There's a lot of excitement. This is a new chapter for our school and our community. I am hopeful that the IHSAA will take a look at our situation and see that it is unique.

"We are all very excited about moving to Indiana."

This column solely represents the writer’s opinion. Reach him at steve.hanlon@nwi.com.

Diamonds in the Dirt: Morton masks up its infield for safety on the softball field

This is a generational debate. There are two points of view and not a third.

DYER — Illiana Christian's girls soccer program was competitive for many years when the school was in Lansing. But there were some drawbacks, too.

While some people may define a school largely by the town or city in which it is located, Peter Boonstra knows that the educational foundation…

MIKE NIETO: A change of scenery and seasons for Illiana Christian?

What is next for Illiana Christian athletics?

On Monday history could be made in Lansing. Illiana Christian High School will take a vote to see if its history and geography will change.

Illiana Christian's new campus in Hanover Township is coming along as the school will move from Lansing, Illinois, to Indiana before the start of the 2018-19 school year. The Vikings athletic department is looking for a new conference for its 18 sports and awaiting how long the IHSAA will make Illiana wait for postseason tournament play.

Construction at Illiana Christian High School's new campus in Indiana is moving along swiftly as the school will move from Lansing, Illinois to Hanover Township for the 2018-19 school year.