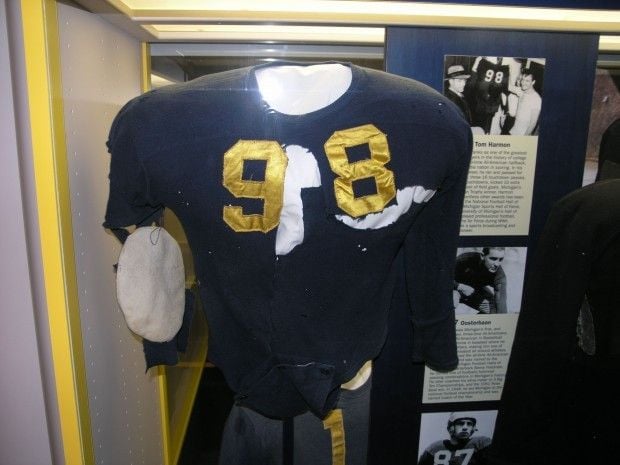 Tom Harmon's No. 98 jersey is on display at Schembechler Hall on the campus of the University of Michigan. Gary native Harmon won the 1940 Heisman Trophy. After his final game at Ohio State, fans ran from the stands and tore pieces of Harmon's jersey for souvenirs, leaving it in tatters. 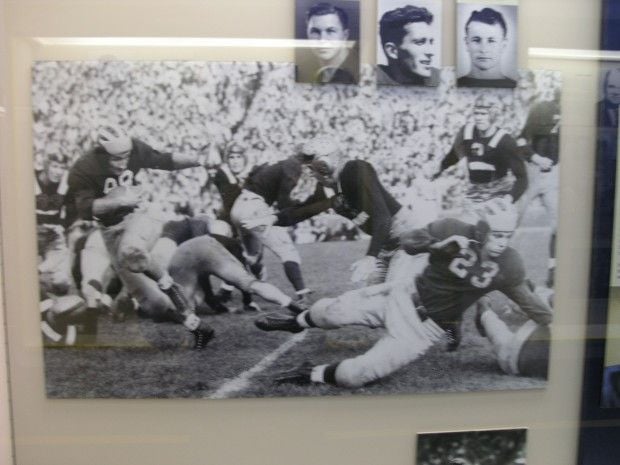 A display at Schembechler Hall on the campus of the University of Michigan holds a 1940 action photo of Gary native Tom Harmon (98), running with the ball. Harmon won the 1940 Heisman Trophy his senior season.

But sadly, the greatest athlete to ever come out of Northwest Indiana is a faded memory for the region's young coaches, players and fans.

Harmon was born in Rensselaer and his family moved to Gary when he was 5. The son of a Gary cop, Harmon achieved star status in nearly everything he did, on or off the athletic field.

The Horace Mann grad was the runaway choice in winning the 1940 Heisman Trophy while tearing up the turf at Michigan with jaw-dropping performances.

"Oh, God, yes," said Bruce Madej, long-time member of the Wolverines' sports information department. "Tom Harmon's replica of his Heisman was put into our stadium suites this year. He's iconic. We have Harmon's helmet and his jersey in the (Bo Schembechler) football museum on campus.

"If Harmon's name is not being mentioned a couple times a month by me and by others in this athletic department, I'd be shocked. We still talk to this day about the (1940) Ohio State game, his final college game."

As Harmon trotted off the field in the final seconds, Buckeye fans gave him a standing ovation and then swarmed over him, ripping pieces of his jersey for souvenirs.

He played both ways, led the nation in scoring his junior and senior years, and averaged 5.4 yards a carry over three seasons.

"Tom Harmon literally was the face of Michigan in the 1940s as a football hero, a war hero, a Hollywood actor, and during a very difficult time for this country," Madej said.

"Quite frankly, I wonder what Harmon would be like in today's high-tech communication age. I wonder how he'd even be able to walk along the streets as a college student because life was so much different back then."

'Harmon made us look good'

Eddie Herbert, quite an athlete himself, graduated with Harmon at Horace Mann in 1937. They played football together. Tom was the quarterback, Eddie threw bone-jarring blocks and opened holes a tank could rumble through.

"People years ago knew Tom Harmon," said Herbert, who is 92. "He was one of the greatest football players around and I'm not just talking about Indiana.

"And he was a down-to-earth kinda guy. We got along well. I was the blocker and he was a runner. And could he set up those blocks for me."

"He made us look good," Herbert said.

Harmon received 54 college offers but chose Michigan for its English and Speech programs with hopes of entering the broadcast field one day. In his four years in Ann Arbor, he earned 16 varsity letters.

At Horace Mann, Harmon had won state track titles in the 100-yard dash and low hurdles. He starred in basketball and threw three no-hitters in AAU summer baseball.

The first time he put on boxing gloves in gym class, he unloaded a half-dozen solid punches before his opponent had time to square off.

"Harmon was just born that way. He was an all-around athlete that you don't see very much anymore," Herbert said. "He was too good to ever worry about losing.

"He wasn't flashy around school or feisty. He was just a top-notch kid. He was Tom Harmon."

The No. 1 draft pick of the Chicago Bears in 1941, Harmon was more than an all-around jock. He was 'The Natural,' remember?

Life was an adventure he needed to explore.

Harmon enlisted in 1941 as an Army Air Corps pilot at the outbreak of World War II, earning the Silver Star and Purple Heart.

His military career was the stuff of movies.

In 1943, Harmon's plane was knocked out of the sky by a fierce tropical storm over South America. He wandered four days and 50 miles through dense rain forest, armed only with a compass and machete.

Later, Harmon was shot down over Chungking, China and rescued by the Chinese underground.

He later enjoyed a short acting career after playing briefly with the Los Angeles Rams but wartime injuries had taken his speed and power.

Next stop was the TV booth, where he reported "live" on more than 10,000 major sporting events for ABC, CBS and NBC.

Higgins, a former reporter at Channel 56, has done his best to keep the Harmon legacy alive, locally. But as region old-timers such as Herbert disappear, so do the memories.

"Harmon's sister worked with my father at the Illinois Bell Telephone Company and when 'Harmon of Michigan' made its movie debut at The Palace in downtown Gary, we had seats right behind him," Higgins recalled.

"I was in fourth-grade at the time, I got his autograph and I was thrilled to death. I mean, Tom Harmon! That was a big deal."

Tom Harmon stats at U. of Michigan

1937 -- graduated from Horace Mann, enrolled at University of Michigan

1941 -- drafted No. 1 by Chicago Bears, chose instead to play briefly with New York Americans of rival American Football League

1948 to early 1980's -- was a sportscaster in Detroit; worked nationally for ABC, CBS and NBC; did preseason game coverage for Oakland Raiders

On your next trip to Ann Arbor, visit Antelope Antiques & Coins and check out the basement. There, you'll find the memory of Gary's Tom Harmon.

Tom Harmon's No. 98 jersey is on display at Schembechler Hall on the campus of the University of Michigan. Gary native Harmon won the 1940 Heisman Trophy. After his final game at Ohio State, fans ran from the stands and tore pieces of Harmon's jersey for souvenirs, leaving it in tatters.

A display at Schembechler Hall on the campus of the University of Michigan holds a 1940 action photo of Gary native Tom Harmon (98), running with the ball. Harmon won the 1940 Heisman Trophy his senior season.