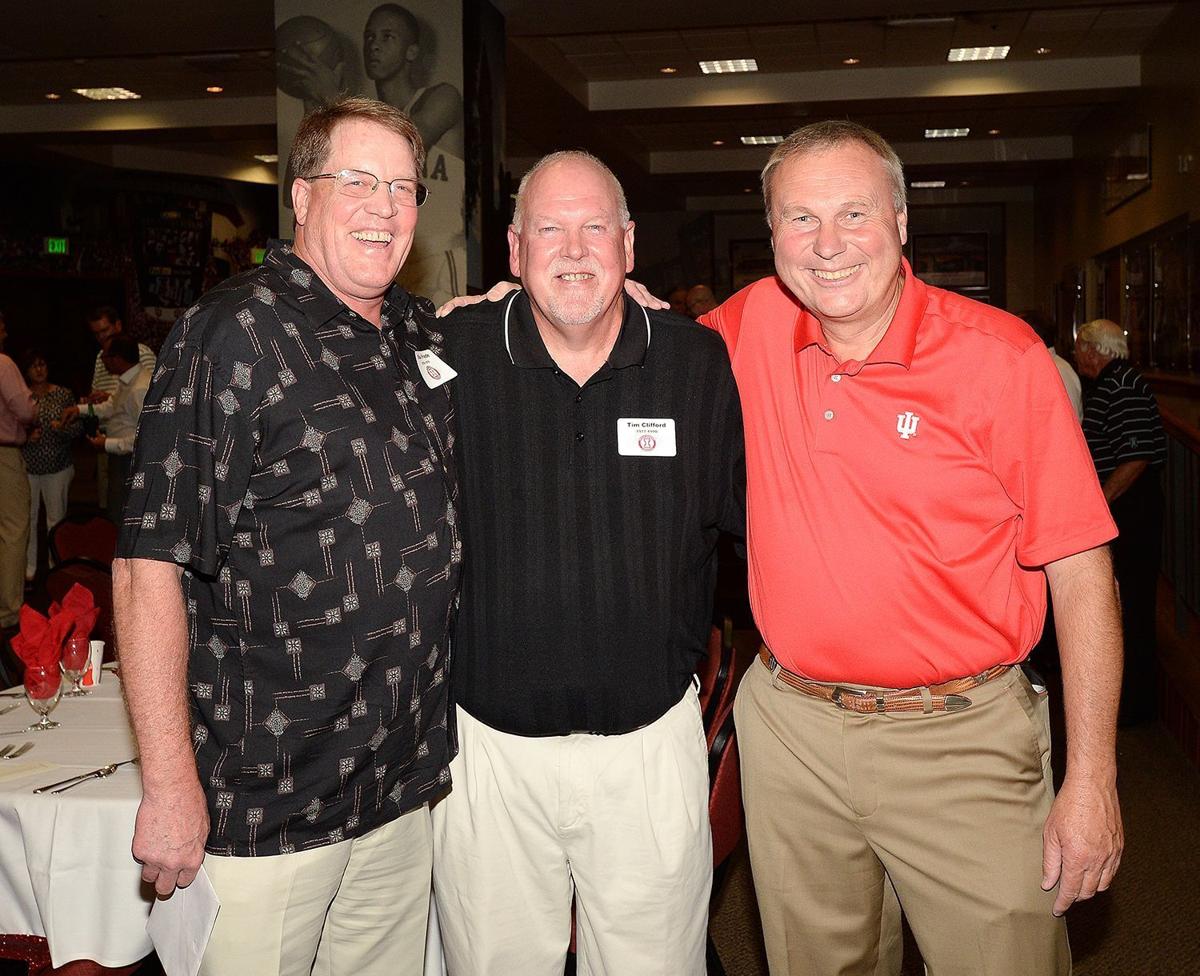 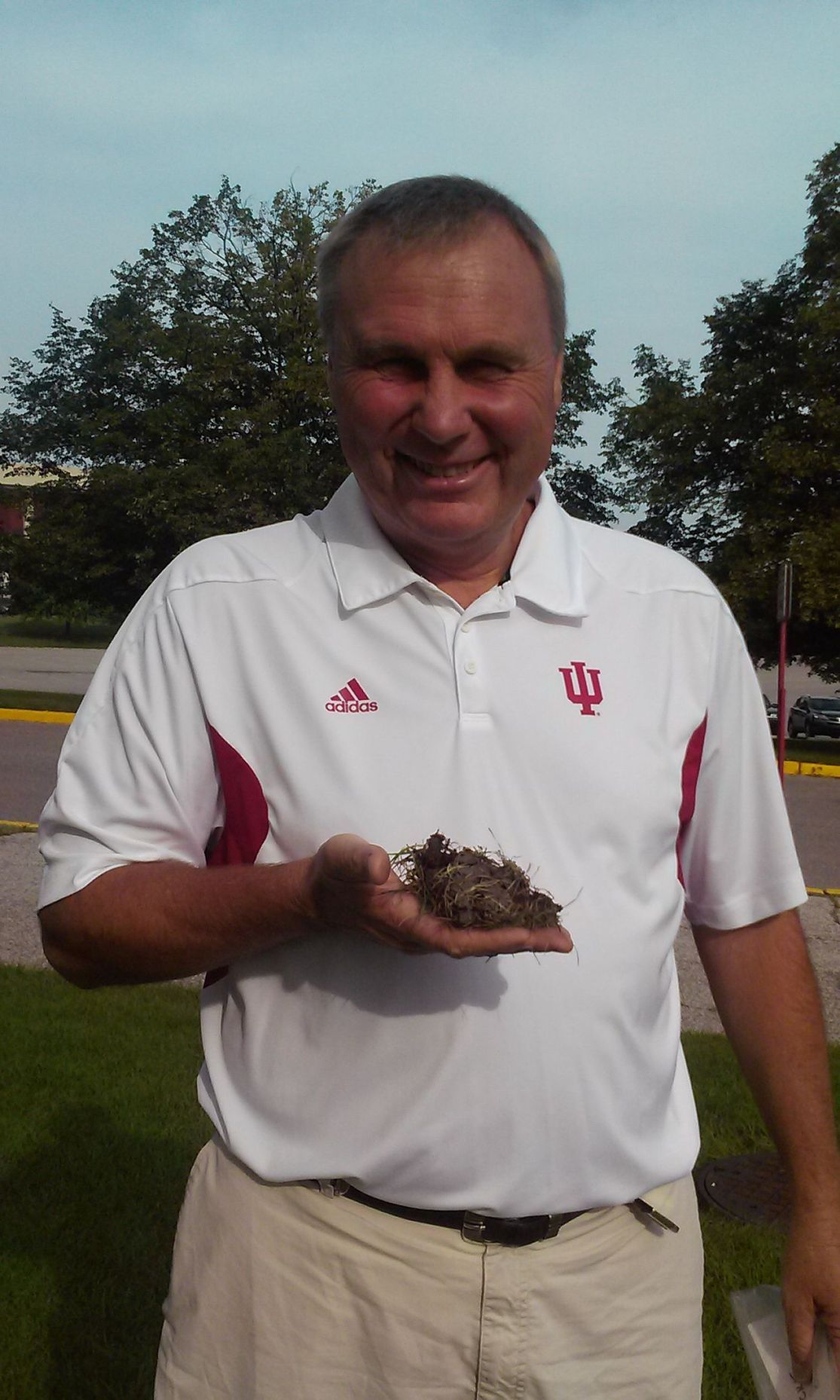 Mark Deal, a former Hobart and Indiana University football star, is an assistant athletic director for alumni relations at IU. He holds a piece of turf from the Brickie Bowl.

Purple and gold or cream and crimson?

Mark Deal laughed when asked which did he bleed.

The 1975 Hobart grad is an assistant athletic director for alumni relations at Indiana University. His roots to both Hobart and IU are deep ones.

"In my desk, I have in a plastic bag some turf from the Brickie Bowl," Deal said. "That was where I grew up and played my high school football. A lot of memories there."

Deal's dad, Russ, was a hall of fame coach at Hobart and turned the Brickies into a post-World War II power before becoming the school's principal and Don Howell continued the tradition of Hobart being a football power.

Deal's brother Mike was also an outstanding football player and was on IU's 1967 Rose Bowl team. His daughter Carrie Powers played volleyball for the Hoosiers, making the Deal family one of only two families in Indiana athletics history to have three generations of letterwinners. Carrie is married to former IU quarterback Blake Powers. Mark's wife, Patty, is also an IU grad.

"We definitely have a lot of history here," Deal said. "My dad, my brother, me and my daughter, that is something special."

Mark and Mike both went into the Indiana Football Hall of Fame together in 2013.

They also have a lot of history in Hobart.

"I remember the 1972 team when I was a sophomore and we were 9-1," Deal said. "There were no playoffs then. I think that was the best team in the state that year. In 1973, we lost to Merrillville in the first game and were 9-1. Gavit went to the playoffs that year."

Deal was all-state in 1974 then played center for the Hoosiers from 1975-78 and was a graduate assistant under Lee Corso in 1979 when the Hoosiers beat Brigham Young to win the Holiday Bowl. He also coached from 1996-99.

Now, he is involved with various facets including recently helping put together an 80th birthday party for Corso.

"I just love the atmosphere down here," Deal said. "It's a great school. I guess having coached and now working with alumni, that makes it a lot of fun."

Mark and Patty Deal have been married 30 years and have a daughter and two grandchildren.

Deal is an assistant athletic director for alumni relations at Indiana University.

The 1975 Hobart grad is a 2013 inductee into the Indiana Football Hall of Fame. Deal's brother, Mike, joined him in the class. Their father, Russ, was inducted in 1976. Russ was a longtime Hobart football coach and principal.

Russ Deal played for Bo McMillin and was captain of the Hoosiers' 1945 Big Ten championship team and is a member of the IU Athletics Hall of Fame. Mike played on IU's 1967 Big Ten championship and Rose Bowl team under John Pont. Mark played center for the Hoosiers from 1975-78 and was a graduate assistant under Lee Corso in 1979 when the Hoosiers beat Brigham Young to win the Holiday Bowl. He also coached from 1996-99.

Mark served as an assistant director of development with IU's Varsity Club. Deal also played from 1975-78 and coached in 1979 and from 1996-99 for the Hoosiers.

He was linebackers coach at Wabash College in 1980. He spent four years there.

Mark and his wife, Patty, also an IU graduate, have one daughter, Carrie (Blake) Powers, one son, Casey, and two grandchildren.

Carrie played volleyball at IU, making the Deal family one of only two families in Indiana athletics history to have three generations of letterwinners.

Mark Deal doesn’t know where he’d be without sports.

Winning a college football national championship is a unique experience.

Mark Deal, a former Hobart and Indiana University football star, is an assistant athletic director for alumni relations at IU. He holds a piece of turf from the Brickie Bowl.