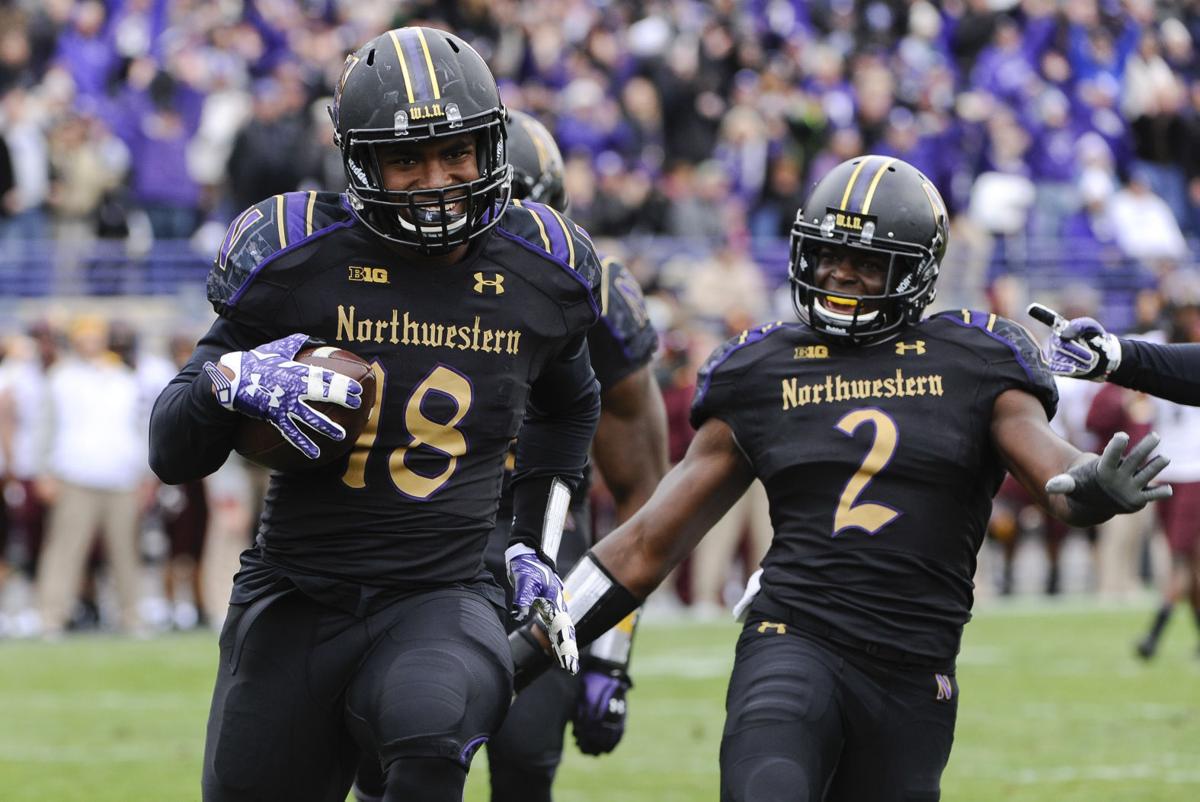 Northwestern linebacker Anthony Walker (18) runs for a touchdown after picking up a fumble as safety Traveon Henry (2) looks on against Minnesota during the second half Oct. 3 in Evanston, Ill. Northwestern beat Minnesota 27-0.

Northwestern quarterback Clayton Thorson looks on after he dove into the end zone for a touchdown during the second half against Minnesota on Oct. 3 in Evanston, Ill. Northwestern won 27-0.

EVANSTON, Ill. | There weren't exactly soaring expectations surrounding No. 17 Iowa when the season started. The same could be said for No. 20 Northwestern.

Now the Hawkeyes (6-0, 2-0 Big Ten) are unbeaten. The Wildcats were until last week.

They'll meet this Saturday, with Iowa looking to extend its best start since it won its first nine in the 2009 Orange Bowl season.

Even so, coach Kirk Ferentz is wary. Sure, Northwestern (5-1, 1-1) got ambushed in a 38-0 blowout at Michigan last week. But the Wildcats have also handed Stanford and Duke their only losses.

"I think that gives you the indication of the strength of this Northwestern team," Ferentz said.

A win would have put Northwestern at 6-0 for the first time since 1962, when Ara Parseghian was the coach. But the Wildcats have a chance to atone somewhat at home against one of the most surprising teams in the country, albeit one that narrowly remained unbeaten last week.

Iowa held off Illinois 29-20, with Jordan Canzeri rushing for 256 yards on a school-record 43 carries.

Here are some things to look for as the Hawkeyes look to remain unbeaten while the Wildcats try to get back to winning after a brutal loss.

DEFENSE, OFFENSE: Despite the loss to Michigan, Northwestern's defense still ranks among the stingiest in the Big Ten. The Wildcats rank third in the Big Ten in scoring defense (12.2 points per game) and second in total defense.

With balance on offense, Iowa is second to Ohio State in scoring at 31.7 points and is averaging 409.3 yards per game.

BANGED UP: Iowa's offensive line had been mostly fantastic — until last week. Injuries to tackles Boone Myers and Ike Boettger left the Hawkeyes — and quarterback C.J. Beathard — scrambling all afternoon in a 29-20 win over Illinois. Neither player is expected back Saturday, leaving James Daniels as likely the first true freshman to start at tackle for Ferentz. "We'll just have to keep practicing several guys at several spots, because depending on where the water starts coming in the boat, that's where we've got to make the repairs and shift guys," Ferentz said.

REBOUND TIME: The way Northwestern was sailing along, last week's game was a major letdown for the Wildcats. How will they respond?

"You got to get up off the mat," coach Pat Fitzgerald said. "You get knocked down and you don't have the game that you're capable of having, you've got to get up. There's no other choice."

Two years ago, coming off a 10-win season, Northwestern won its first four and was leading Ohio State in the second half when the game — and the season — slipped away.

The Buckeyes rallied for a 40-30 victory, and the Wildcats dropped seven straight. After going 5-7 the past two seasons, Northwestern is right behind the Hawkeyes for the Big Ten West lead.

LOOKING BACK: For Northwestern, last week's trip to the Big House was one big letdown.

A team that came in allowing seven points per game, the lowest average in the country, gave up a 96-yard touchdown to Jehu Chesson on the game's opening kickoff. By the time the first quarter ended, the Wildcats had allowed 21 points after giving up no more than 19 in the first five games.

On offense, the Wildcats set season lows with 168 yards overall and 38 rushing. Clayton Thorson threw for 106 yards and had an interception returned for a touchdown. Justin Jackson had just 25 yards rushing after going for more than 100 in four of the first five games.

TYLER TIME: Beathard was seen icing his hip and groin following the win over the Illini. Though Beathard insisted he'll play against the Wildcats — and Ferentz is confident he will, too — the Hawkeyes might have to turn to untested backup Tyler Wiegers, a redshirt freshman with two career passing attempts. "We're confident in him. That's our motto. Tyler is gaining ground," Ferentz said.

Northwestern linebacker Anthony Walker (18) runs for a touchdown after picking up a fumble as safety Traveon Henry (2) looks on against Minnesota during the second half Oct. 3 in Evanston, Ill. Northwestern beat Minnesota 27-0.

Northwestern quarterback Clayton Thorson looks on after he dove into the end zone for a touchdown during the second half against Minnesota on Oct. 3 in Evanston, Ill. Northwestern won 27-0.